“Do you know what makes you special, in a different way than the baby in mommy’s tummy?” The Guy asked The Boy Child as he pulled him onto his lap.

“I’m better at building with Legos” The Boy Child replied, apparently confident in his six-year-old understanding of how the world works.

“Well, yes” The Guy replied, trying not to laugh, before asking “but do you know what makes me love you so much?”

“Because I’m your best buddy!” The Boy Child exclaimed, throwing his arms around The Guy’s neck.

Hugging him back, The Guy explained “yes you are! You are my buddy, and what makes you so special to me, is that your brother is being born into our family, but I picked you to be mine. I met you, and I took a good long look at everything that makes you who you are, and I said to myself  ‘I want to be his daddy, because that’s how much I love him.’ Forever, and ever, and ever, you’re mine, because out of all the little boys in the whole wide world, I picked you.” 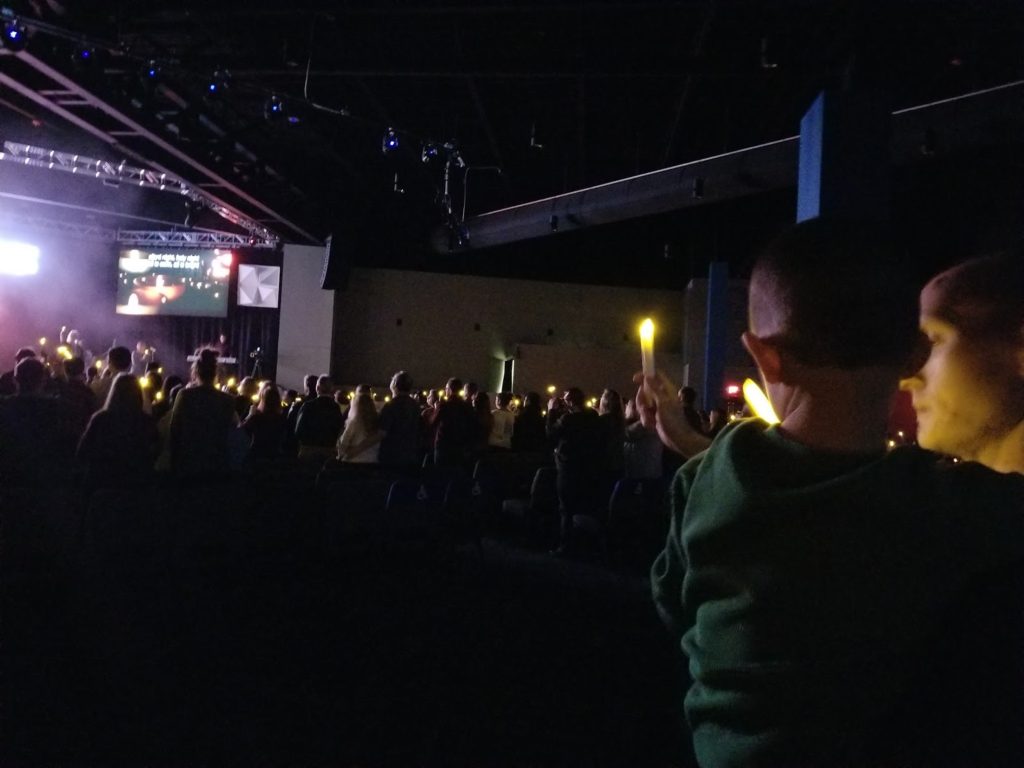 With The Boy Child in is arms, The Guy is showing him how to hold his candle during the Christmas church service.
******************
A couple weeks before Christmas, The Boy Child was injured, intentionally, by a respite care worker we had hired to keep him safe. And due to a pending investigation of her, I can’t go into details, but this woman had worked for us for a couple months, had gone through a background check, interview, drug test, and CPR class, all through a respite care agency. Yet still, she harbored an anger streak that none of us knew about.
I had hired her to keep my son safe, and she failed.
And there were a lot of sleepless nights where tears of guilt and anger soaked my pillow, because my son has now been hurt twice by people with whom I have allowed into his life.
I consider myself to be a safety crazy mother. I’ve let my kids get in a car with less than five people besides me, in their entire lives, because I don’t trust many people to drive them. I researched the hell out of the car seats they ride in; and yes, my nine year old is still in a high back booster. I’ve taken a CPR and Heimlich maneuver class almost every year, yet I still cut the kid’s hot dogs up into pieces so small, that when I’m done with it, it resembles pate, but I don’t care because at least they won’t choke. I take cold showers because I keep the water heater thermostat at a setting that assures me the kids won’t ever be burned in the tub, and now that my eldest is venturing out on more and more play dates, I got her a GPS tracking watch, because I want to make sure that when I leave her somewhere, she stays there until I come to get her.
But last month, I went to pick my children up from school, and The Boy Child wasn’t there. Initially I thought that maybe he was just a bit late getting from his classroom to where I pick him up, but as the lot began to empty and he still wasn’t in sight, I started to panic.

When the teachers started looking through the building, and I heard one frantic office worker say to another teacher “it’s like he just vanished,” I remember thinking to myself “this is the moment where my life ends.”

Frantically texting my husband while I’m completely falling apart, I hear them repeatedly paging my son over the school’s intercom system as everyone around me begins to search. 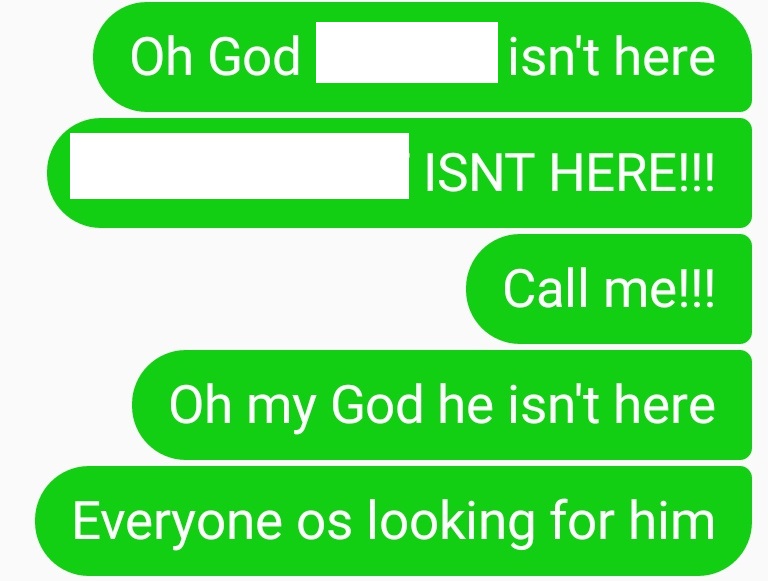 I never use the word “God,” unless I’m speaking about God himself, and  try not to send messages with obvious typos, but looking back at these messages I sent to The Guy, all I can see is how panicked I was.
Fifteen minutes later, with my daughter in tears, the crossing guard looking up and down the streets, and me screaming to call the police, The Boy Child suddenly appeared.
Instead of coming out the door that he always has — the door he is supposed to come out of — he had gone out into the teacher’s lot, where he was eventually found.
With my husband racing to the school from work, I crumpled into a ball by the playground, hugging my children and thanking God for sparing me from a nightmare that other parents haven’t been as lucky to wake up from.

And looking back, I know that he was at the school the entire time. I know that the danger factor was relatively low, but still, things needed to change. Although we have made great strides in the control of The Boy Child’s seizures, he is still plagued by severe cognitive dysfunctions; issues that cloud his logical thinking and disintegrate his ability to understand cause and effect.

In the last year The Guy and I have had to “baby proof” the house once again. Outlet covers, special locks on doors, securing furniture to walls, and maintaining a security system that is in place not so much for the fear that someone may break in, but the fear that someone may wander out. And every night, we hook him up to a pulse oxygen monitor so that we will know if he is seizing and in distress.

Yet it hasn’t been enough, because although he has been safe, he still flooded our house last spring and we ended up living in a hotel. Now, with his disappearance at school, even though he has an aide that is with him during the day, it solidified with us that we need more help.

That night, after my heart finally stopped pounding loud enough for me to think over the noise, The Guy and I decided that it was time to hire a respite care worker. We were willing to do what we needed to do, to make sure that despite the distractions of inevitable life, that between us all, there would always be eyes on him.
Safety.
But instead, she injured him.
Shaking through anger I watched my husband come to terms with the knowledge that someone had hurt his son, and for the first time, I saw the fury in him that I’ve felt in my own soul for the last six years.
My son is like this, because my ex intentionally hurt him.
And if you were wondering, court with my ex is going nowhere fast. We never did come to an agreement, and a hearing was set for January, which as you may have noticed, is now here. In the meantime, he has continued to fall behind on child support, and not pay a single penny towards medical bills.

In other words, he’s the same as always.

The same person who has hurt my children, and continues to do so. And all of this, has just made me even angrier at him because this worker was not the one I initially wanted to hire. She wasn’t even in my top five, but she was the one that I could afford, because my son’s medical bills are out of control, my ex isn’t paying anything towards them, and there is only so much that The Guy and I can afford.

Not that my ex cares.

So here we are, my son processing what has now happened to him twice, two parents who would do anything to help him (yet somehow keep failing), and one biological dad who after abusing my child to the point of permanent damage, is now filing petitions with the court asking that he be removed from his medical bill responsibility, because he has a new family now.

My daughter is in a grief support group at her school, dealing with the fallout of an abandoning parent. I was going through her book bag not long ago, when I came across a worksheet from the group, that she had filled out. 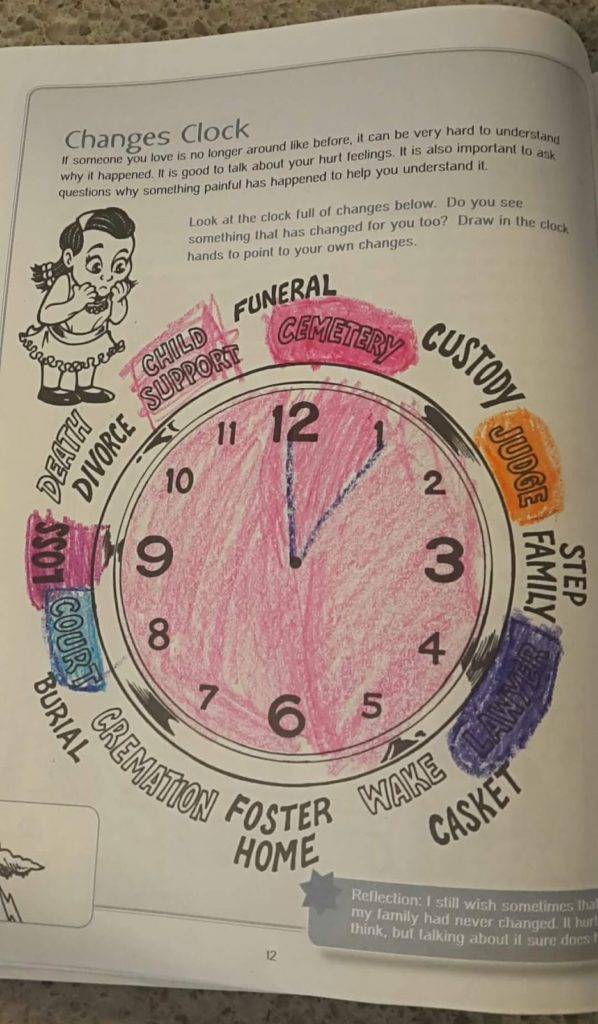 I didn’t even know that she knew a lot of those words, and it breaks my heart. I try so hard to protect her from what is going on with her biological father, but I guess I’m not doing as well as I thought, because she apparently has heard the words “child support,” “judge,” and “court” before. Do you see what’s not on there? Custody. She knows that her biological father isn’t coming back. In fact cemetery is on there, because despite what I tell her, she often asks if he has died. Funeral isn’t on there, because she has no proof that he has.

She is trying to forgive him for what he has done to her, but this isn’t an easy process to understand. 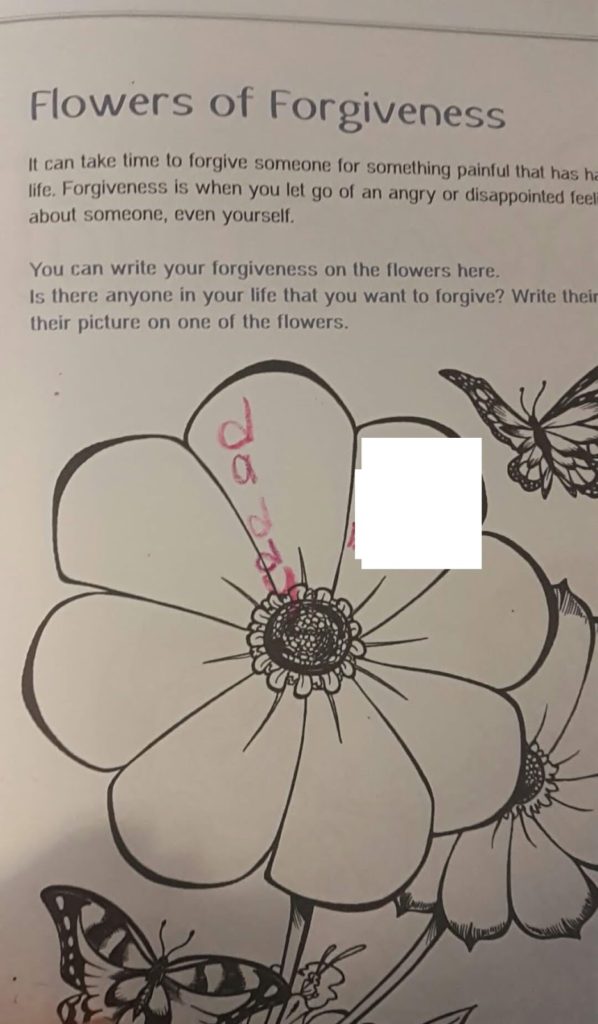 “Daddy picked me” my daughter says to me sometimes when I tuck her into bed, referring to the dad she has now. She has a little light up board on her shelf, that she draws pictures on, and it illuminates while she falls asleep. I looked at it the other day and it said “I love you daddy,” with a little smiley face where the “o” should be. She’s nine, and she knows that while someone set her down and walked away, someone else came along and picked her up. 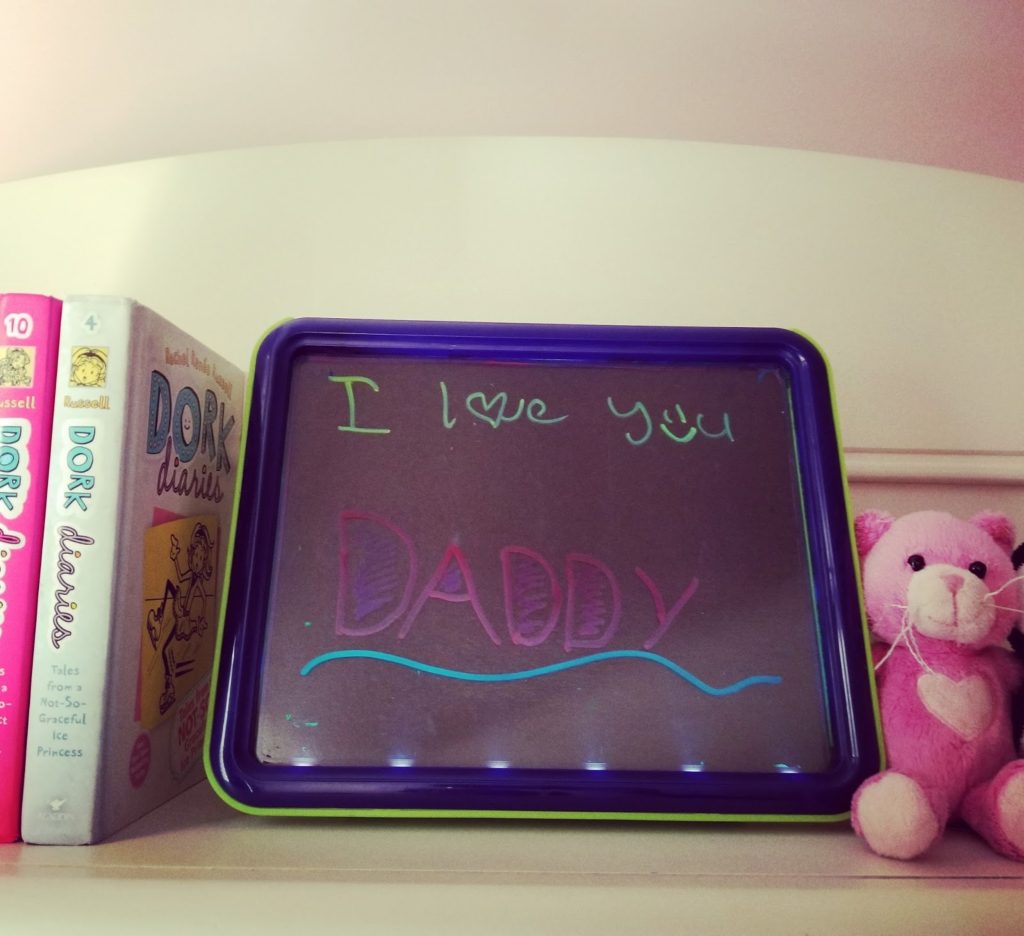 Court is in two weeks, and by the grace of God, my horrific judge has finally retired. We will go to hearing in front of a new judge, and I am praying that this will be the turning point in a case that has dragged out way too long.

I just need the judge to understand that. This isn’t about me, or my ex, this is about children.

I need the judge to look at my ex, then look back at the files, and pick my children. 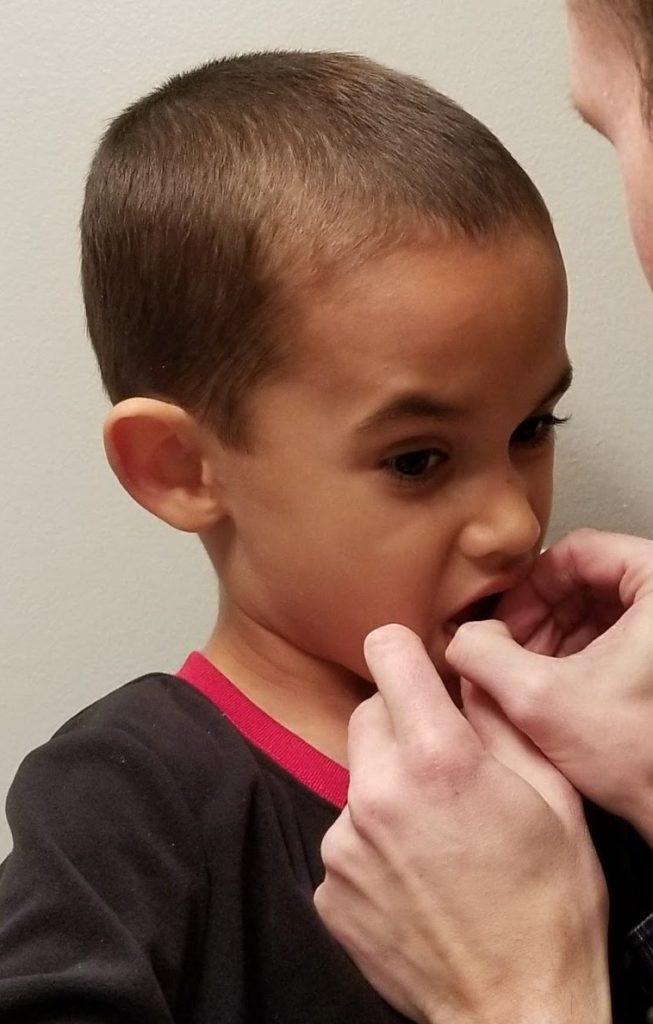