So…you know those neighbors, the one’s that I referenced in my original story? Did I mention that I live in a townhouse? No? Ok, well I do. And I just so happen to share a common wall with them. Cozy, right? Brings new meaning to the term “sleeping with the enemy.”

Well anyways, I WAS sleeping last night, until I was awakened at two a.m. by a HUMUNGOUS thud on said common wall. My first thought was pure terror, that stranger guy had come back, but then as I started listening, I realized, that as far as I remember, stranger guy doesn’t have a very loud, shrill, girly voice that screams things such as “F’ YOU (name withheld). F’ YOU AND F’ ALL OF YOUR FRIENDS.” People. I could hear EVERY. SINGLE. WORD of my neighbor chick’s full on assault attack towards her fiancé (and normally I can’t hear a thing through the walls). She was screaming things at him that I wouldn’t have dared say to my ex on the day of our divorce. At one point I heard him say “(name withheld) don’t you put your hands on me!” To which she replied “Or what? What are you going to do about it?” Now here is where I got mad. He said he would call the police and she replied “And who do you think they are going to believe? Tiny me or 6’2 guy who couldn’t defend himself?”

Ok. Now I’m livid. This, THIS, is why the police just assume a lot of women are lying these days. Because they are!! Here I am, on one side of the wall, fighting tooth and nail for the police to believe and protect the women of our city, and here she is, on the other side of the wall, single handedly tearing down my progress.

The fight got louder and louder until she literally beat him out the front door….and then it continued onto the front lawn. I literally had no idea what to do as I sat there in total darkness peering through the blinds like some creepy voyeur. If he had been the one touching her, I would have had no problem going outside and yanking her into my house, even with the “you can kiss my ass” feelings that I am currently harboring towards her, simply because you don’t put your hands on a woman, and even if you aren’t to fond of her, you still protect her. But here I am, sitting like a blubbering idiot, and watching her go full on “bat shit crazy” on him, and I have no idea what to do. Logically, I could have called the police, but in another post for another time, I’m not currently too fond of them. And he is a big dude, he could have gotten in his car and left if he felt like it, she is too small to actually have restrained him. But still, grrr! 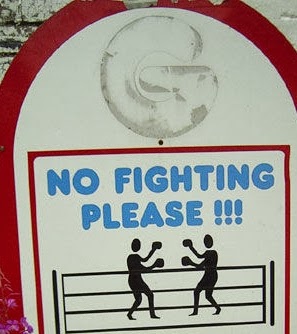 Eventually I went back to bed. Yes, that’s right people, it continued on for so long, that I ACTUALLY FELL ASLEEP.

As my friend puts it, “There is a fine line between dysfunctional family drama, and public display’s of white trashiness.”

I’m telling you, I am a pretty passive person. It really takes a lot to frustrate me, and even when I am frustrated, it comes off as kind of wimpy. As a single mom with an EXTREMELY exuberant five year old daughter and a two year old son that moves at warp speed, I will still go several weeks at a time without even raising the tone of my voice. But this girl you guys, good gosh she is trying my patience and for the record, this is the FOURTH time in the last three weeks that something like this has happened over there in psycho town.

So, this brings me to my point. If you were to have witnessed the same situation, history aside, how would you have handled it? If there is no weapon involved, do you think that it’s just “personal business” as long as the guy is physically capable of defending himself? At what point would you get involved, if ever? The lines seem so blurred to me. Coming from the perspective of the abused, I know the effects that emotional trauma can have on your logical decision making, so I have to wonder at what point DOES someone else need to step in and make a choice for someone else, even if they appear to physically be able to handle it. And then there is the whole flip side to the situation where if he were to eventually defend himself, he could be the one arrested for it.

I’d love to hear your insights in the comment section!

Oh, and don’t worry dear girl neighbor of mine, thanks to my abusive ex husband, I have become a master in biting my tongue, so I will not confront you about this, no matter how much I want too. I will however write about you anonymously online and vent about it the world.

And….. I’ll see you your silent treatment,
and I will raise you one giant “Fuck you!”

This was done too me, not because of me