I never delete the text messages from my phone. I’m not sure why, I just don’t. The other day I was waiting to go into a meeting and I was sort of just scrolling through my old text messages and I started thinking about how weird I am. 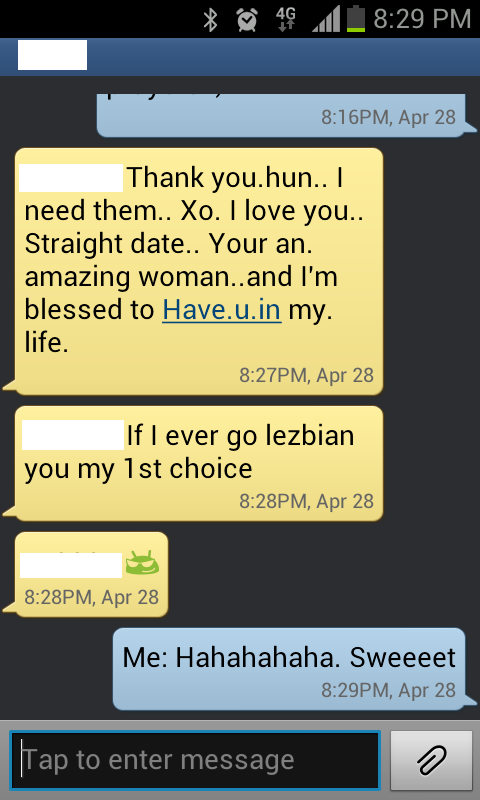 Sometimes you are reminded of some of your more scandalous days 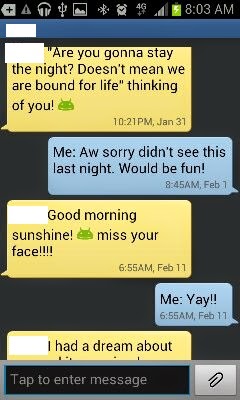 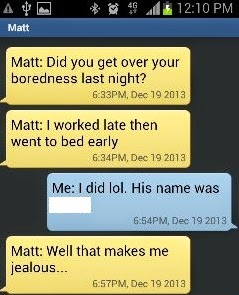 Sometimes you have absolutely no idea what you were talking about 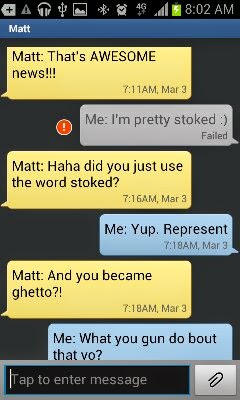 Sometimes you have no idea what other people were talking about 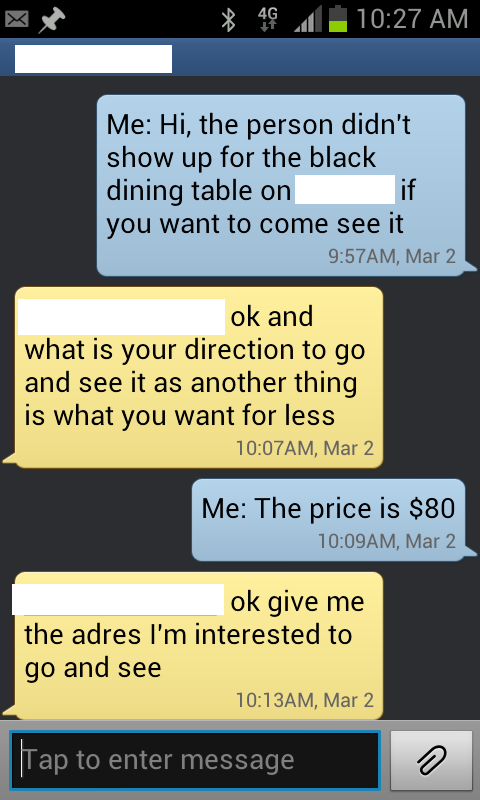 Sometimes you wonder if your phone was ever seized for any sort of investigation, if your sarcasm would be obvious. 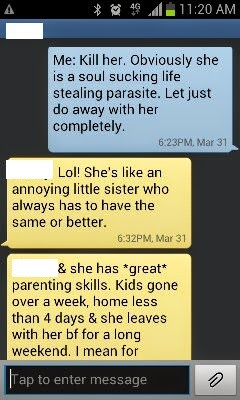 And this is a totally different person. Don’t ever take my advice people! I’m apparently dangerous. 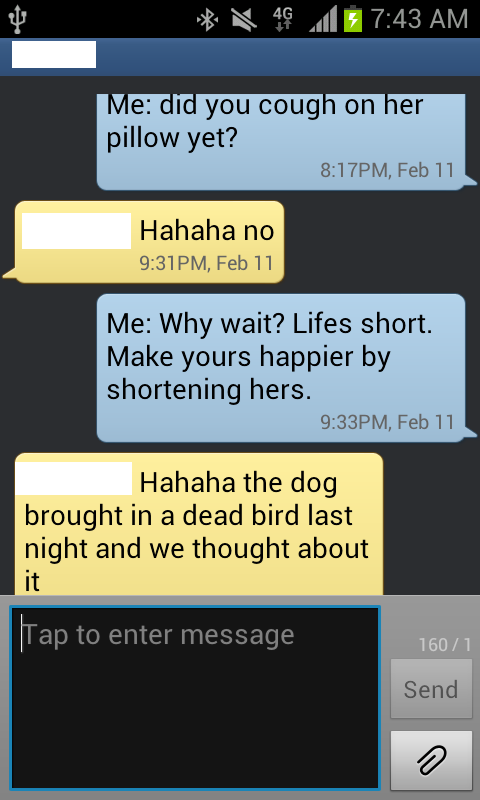 Sometimes you are reminded that your attorney is reading your blog to help protect your privacy and you are instantly overcome with mortification about everything he knows about you. You make a mental note to start looking for another attorney once he realizes how totally weird you are and ceases all communication. You also make a note to buy a full length parka for your next meeting because you are feeling a little exposed. 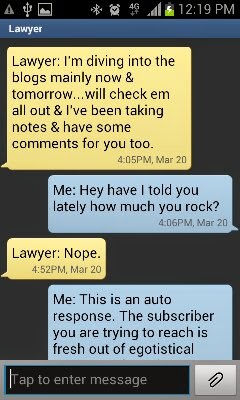 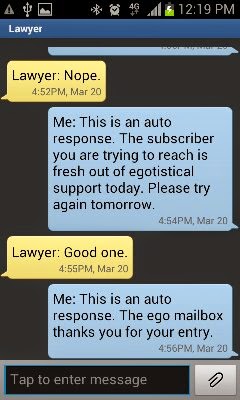 Sometimes, when your babysitter texts you saying that your toddler is singing himself to sleep, you really start to miss your kids even though they were driving you crazy an hour earlier.
Sometimes you are reminded of why you disowned your family. 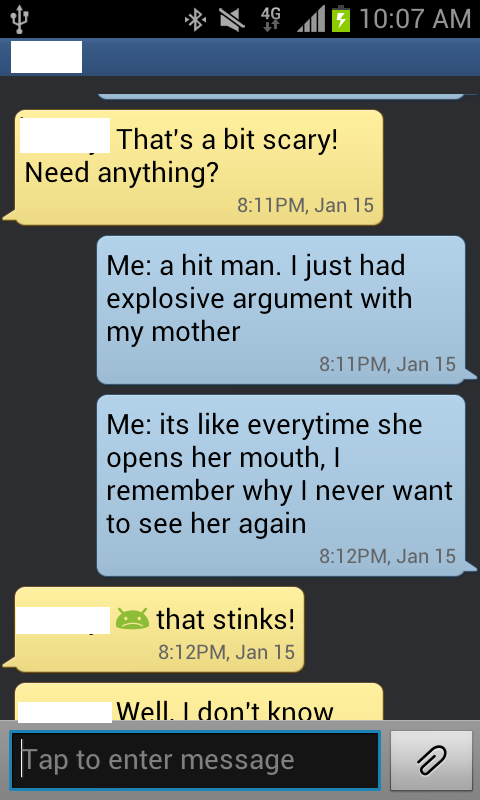 Sometimes you laugh because you have at least one friend with a worse job than you. 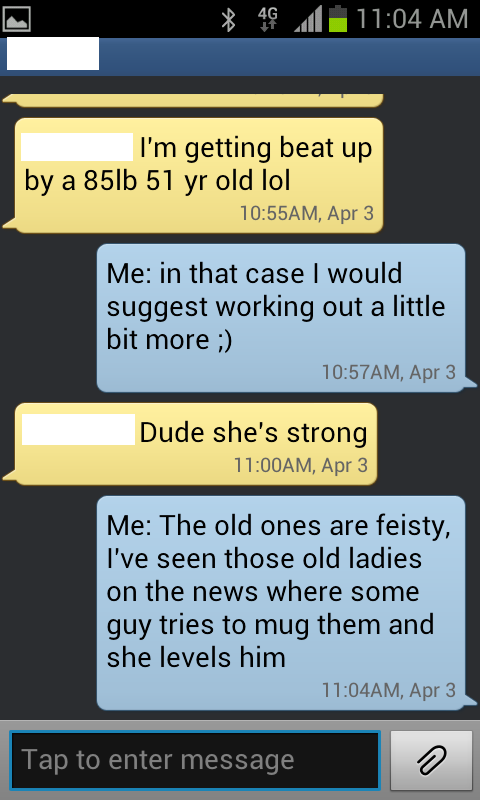 Sometimes you are overcome with a wave of nausea and disgust as you come across a text from a guy who got your number from the human resources department of an office building that you used to clean, just so that he could ask you out on a date. 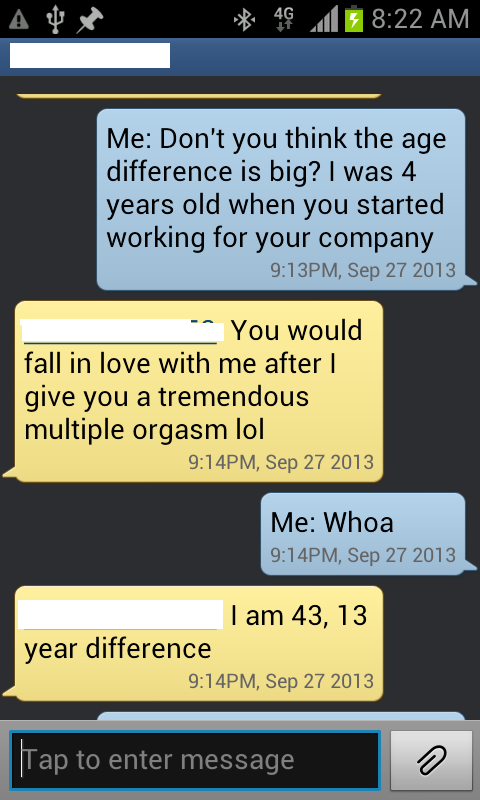 Sometimes you also remember that time the nutcase neighbor insisted that you join a dating website and the first guy you meet is weirder than can be. (the second guy was a criminal awaiting his prison sentence, but that’s another story for another time). I didn’t even want to go on this date, I kept telling the Nutcase Neighbor that his pictures looked fake and he was writing me these really long creepy emails. I was so convinced that something was wrong with this guy that I wasn’t about to meet him anywhere at night, so I told him that I couldn’t afford a babysitter and we would need to meet for lunch while the kids were at daycare. I was kinda hoping that would turn him away, but nope. I showed up and guess what? The pictures were definitely fake. Either that or I didn’t recognize him because all of the make-up he had on. Don’t lie to me about what you look like. I honestly spent the first half of the date wondering if he was a woman. To be honest, I’m still not sure.

Not only that, I could not figure out what was going on with this guy. First he started talking about how he normally doesn’t date people my age (we were the same age) because he likes older women in their fifties. Then he started telling me that he likes older women because they make better sex tapes. Then he told me that he actually likes making the sex tapes with men and the older women can watch. Then he asked me if I would film him sleeping with a man and I could watch. Then he told me he only sleeps with men.

After I left I wasn’t really sure what to make of all that. Aside from the super uncomfortable sex talk I did have fun. I really don’t care what your sexual preference is, but I personally am not attracted to guys that sleep with other guys. I didn’t want to date this guy, but he seemed nice enough so I wasn’t sure how to tell him that I didn’t want to go out again. I didn’t want to hurt his feelings. Coincidentally I ended up getting stuck in a family emergency as soon as I got home and thankfully he handled the situation for me when he sent me this the very next day: 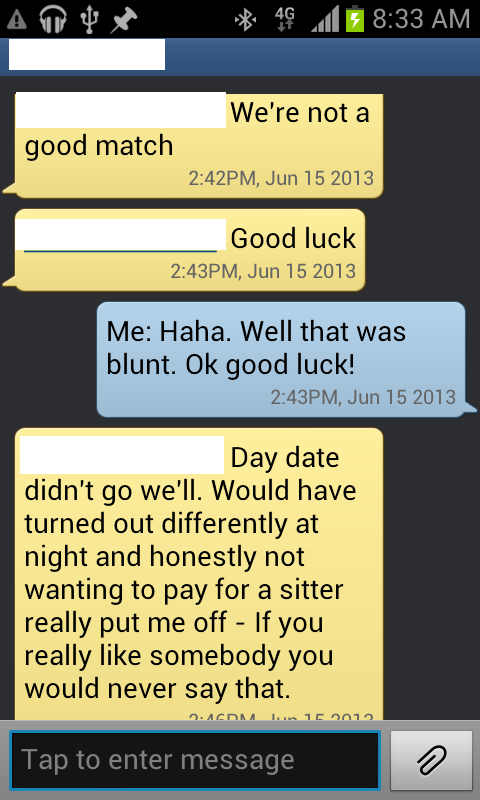 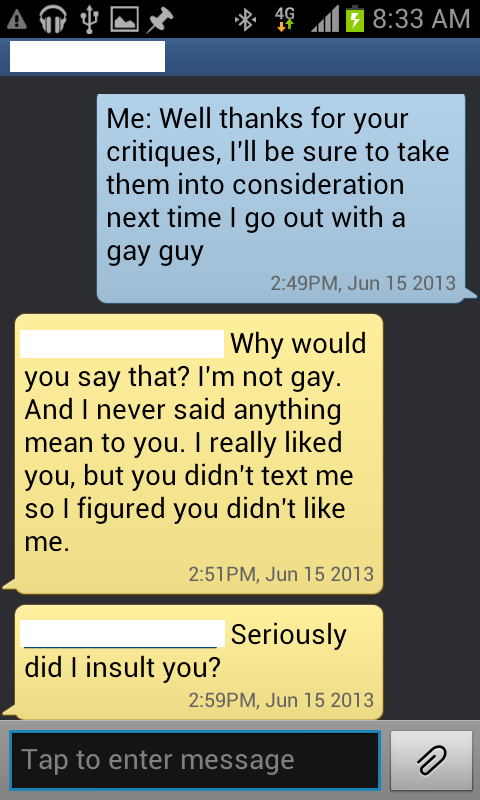 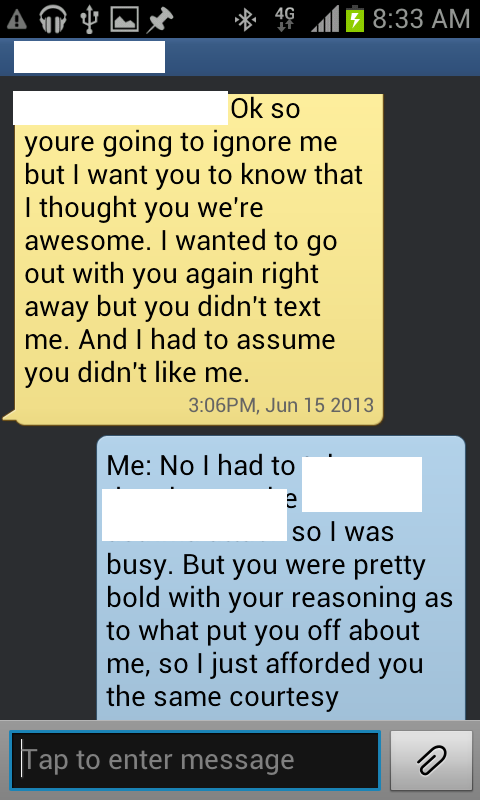 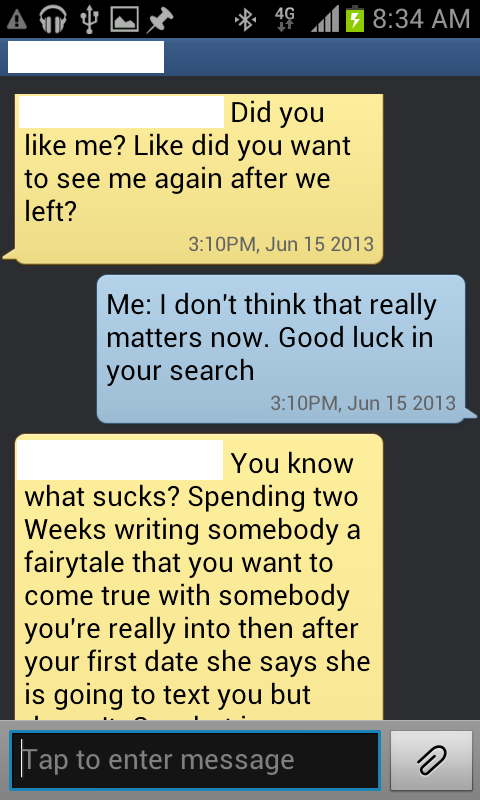 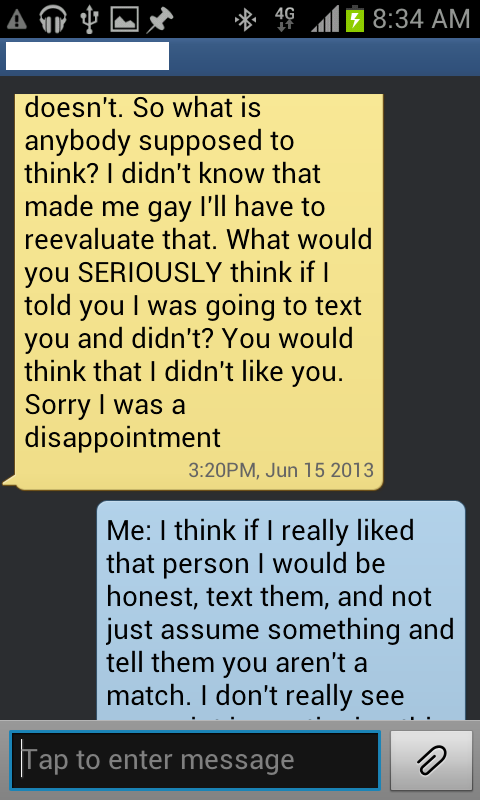 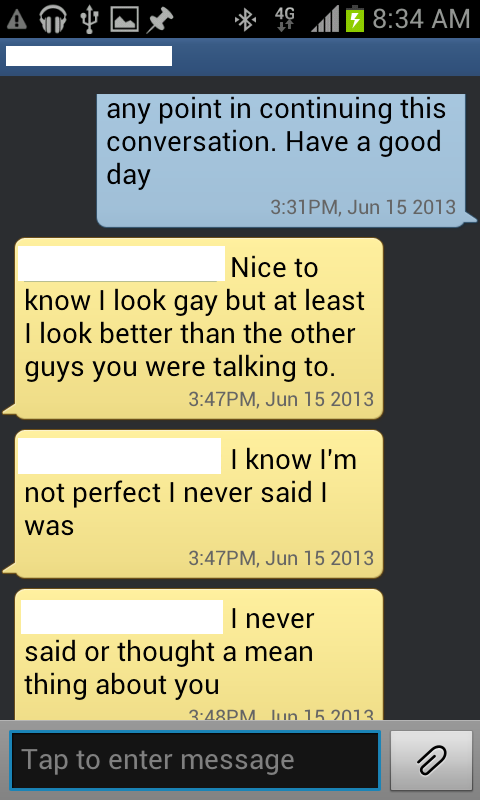 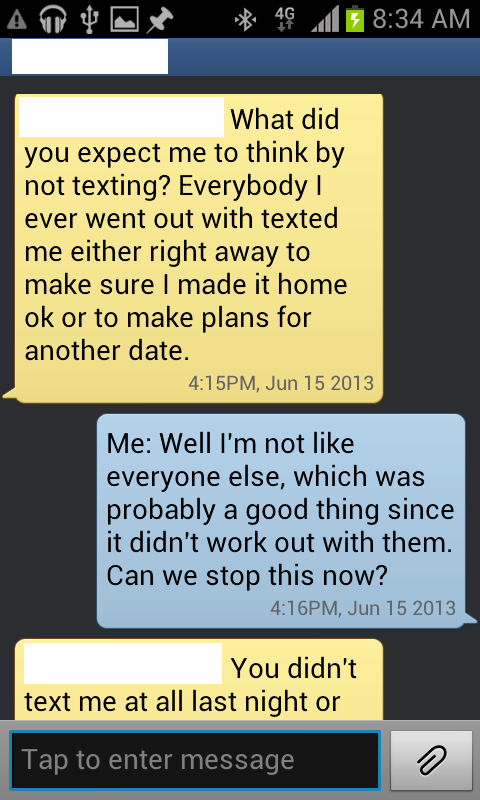 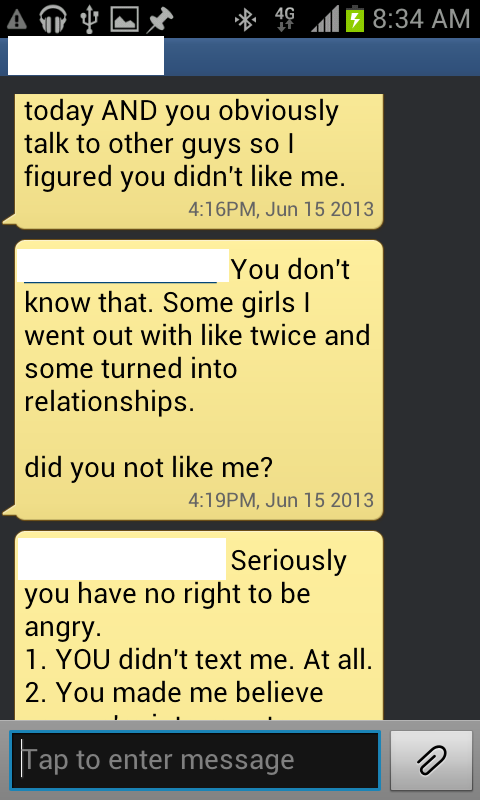 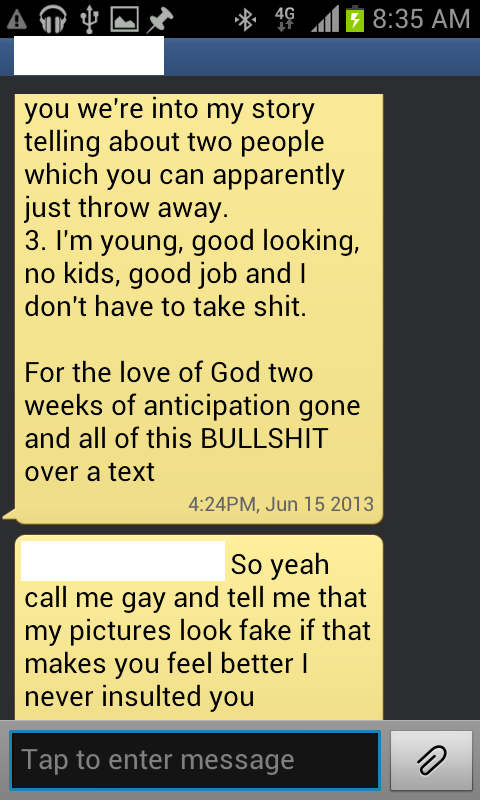 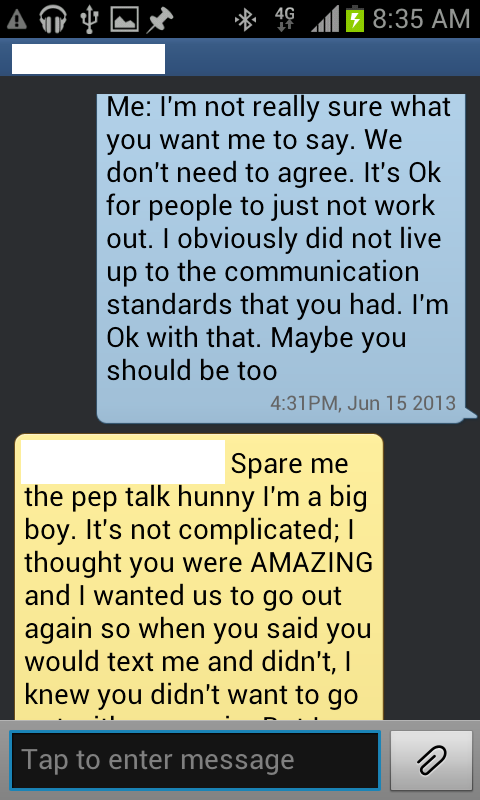 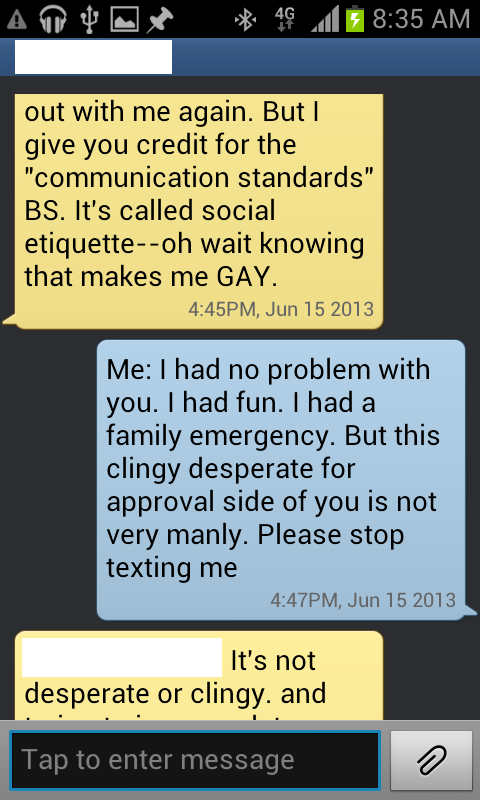 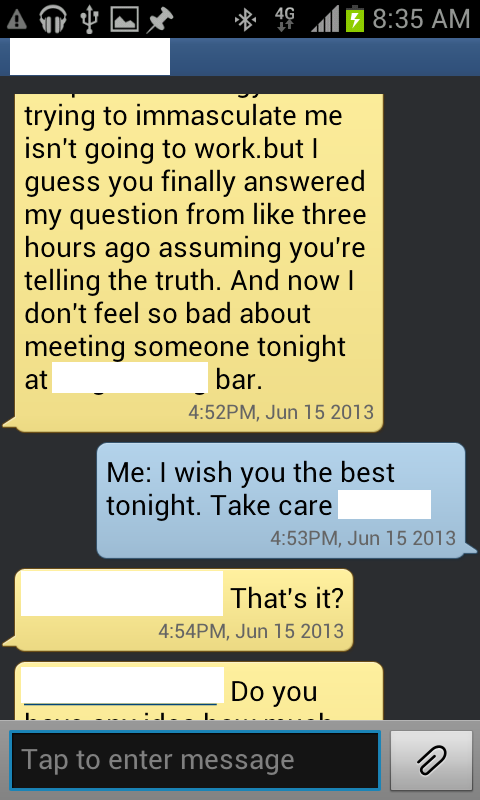 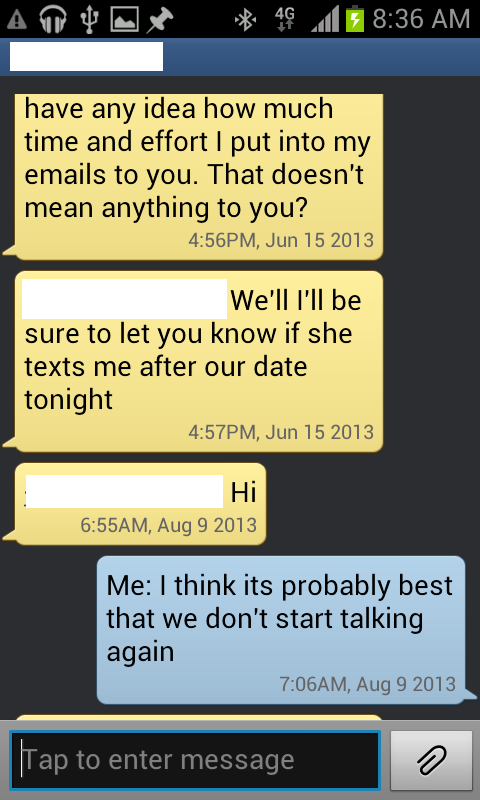 Let me tell you I pulled my profile down real fast after that. A criminal and this guy was a little too much for me.

Sometimes you are reminded how how broken you yourself are when you come across a text a friend sent you after she called you wanting you to talk about your rape. I declined, which hurt her feelings because she thinks I don’t trust her. 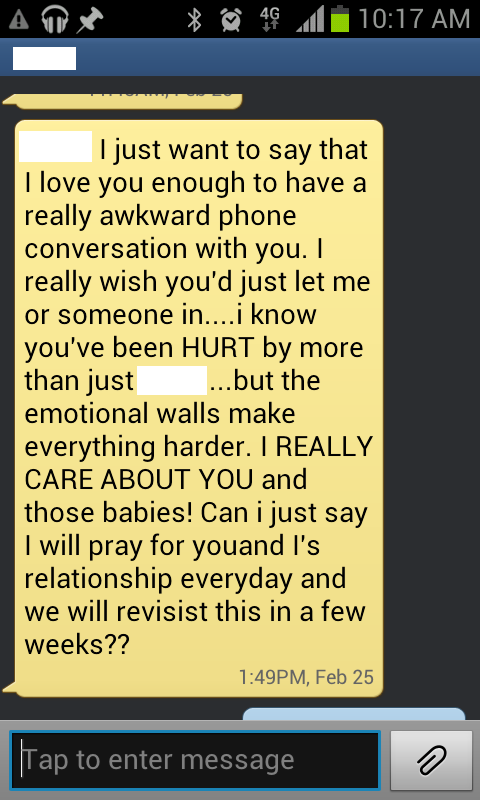 Sometimes you just talk about the Nutcase Neighbors 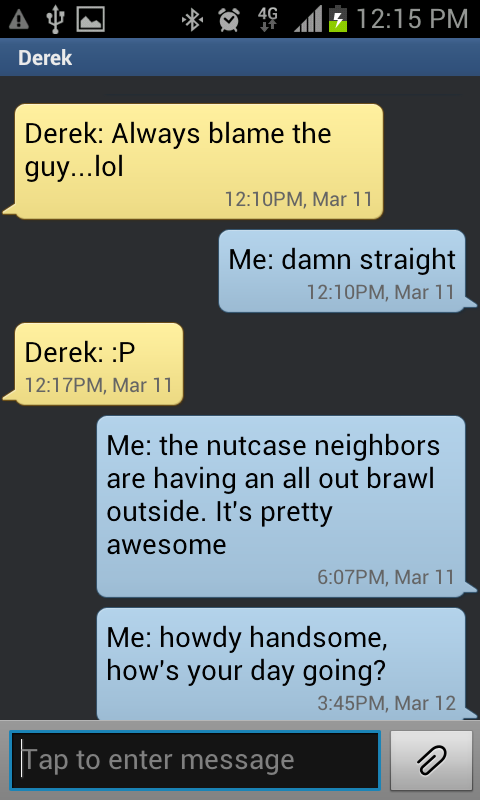 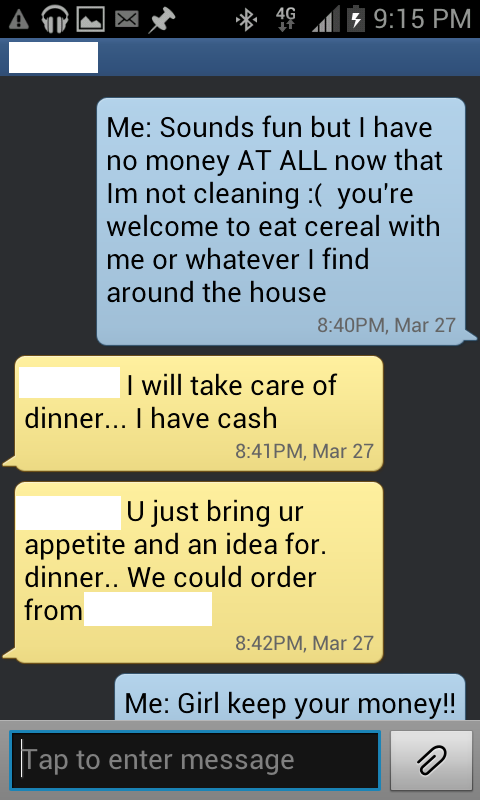 Sometimes, after all of that, you realize that yep, everyone already knows how weird you are, and yet they still talk to you anyways.
No need to hide it, you just keep letting your crazy hang out.
Represent.
Tags: Dating, Odd, Phone
Newer Posts

While In My Underwear, I Punched A Girl In The Face