A few months ago, a Facebook business networking group that I belong to started promoting a variety of subgroups that the group owner is calling “missions.” Before that the group had served as a connection tool where local business owners could network with each other. But then suddenly the group owner started repeatedly asking all of us to join at least one of the subgroups as “a good way for businesses to give back to our community.” I wasn’t sure how many more commitments I could pile on my plate right now, but when I saw that one of the subgroups was aimed at raising domestic violence awareness and that one of my nonprofit board members had joined, I decided to join the DV mission.

Then things got strange.

Almost immediately I got a Facebook message from the mission leader thanking me for joining the group and asking me to raise $500 by the end of the month. I messaged back and politely asked exactly the group was about, and if there was anything I could do besides raise money because I was already busy raising money for my own nonprofit. The mission leader set up a phone meeting with me and it all went downhill from there.

During the phone conversation I realized that she had absolutely no idea what she was supposed to be doing for the mission that she was running other than raising money, and even that was questionable. First she said that she was raising funds for The National Coalition of Domestic Violence, but when I asked her if she had permission to be putting their name on all her marketing materials, she back tracked and said she was just raising money for “any domestic violence group that needed it” and asked me if I could call every domestic violence nonprofit in this part of the country and ask them if they need money.

None of that made any sense.

“So let me get this straight” I said to her. “We aren’t raising money for anyone specific, we are just raising money, where only a portion of it will be raised for a cause, and the rest will go to the group leader?”

That is so evil and at the same time, pure genius.

This group owner has set it up so that he can pull a profit from all the “donations” he is requiring us to raise, and then donating just enough under his own name to write off his business taxes.

I am not OK with any of that.

In these next screen shots, I bring you in where I’m talking with my friend who is also in the networking group and on my nonprofit board.

I am the darker blue blurb 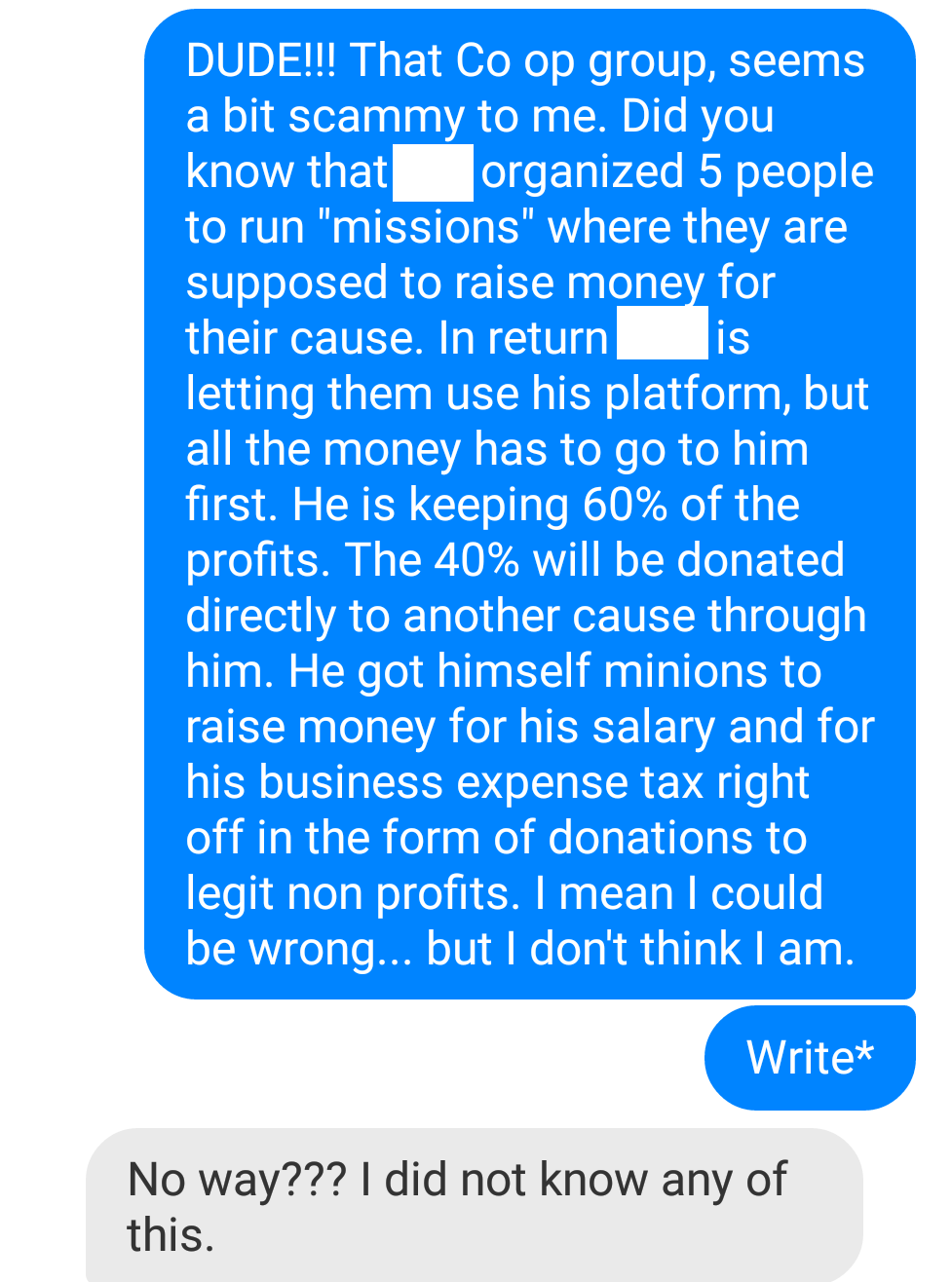 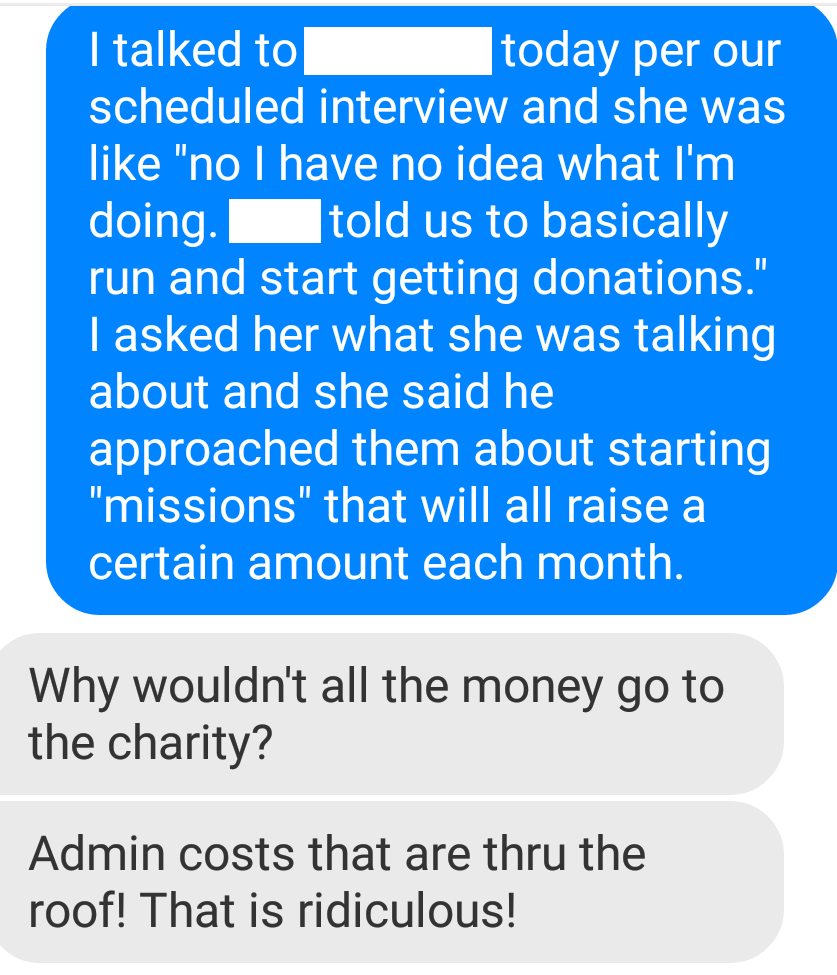 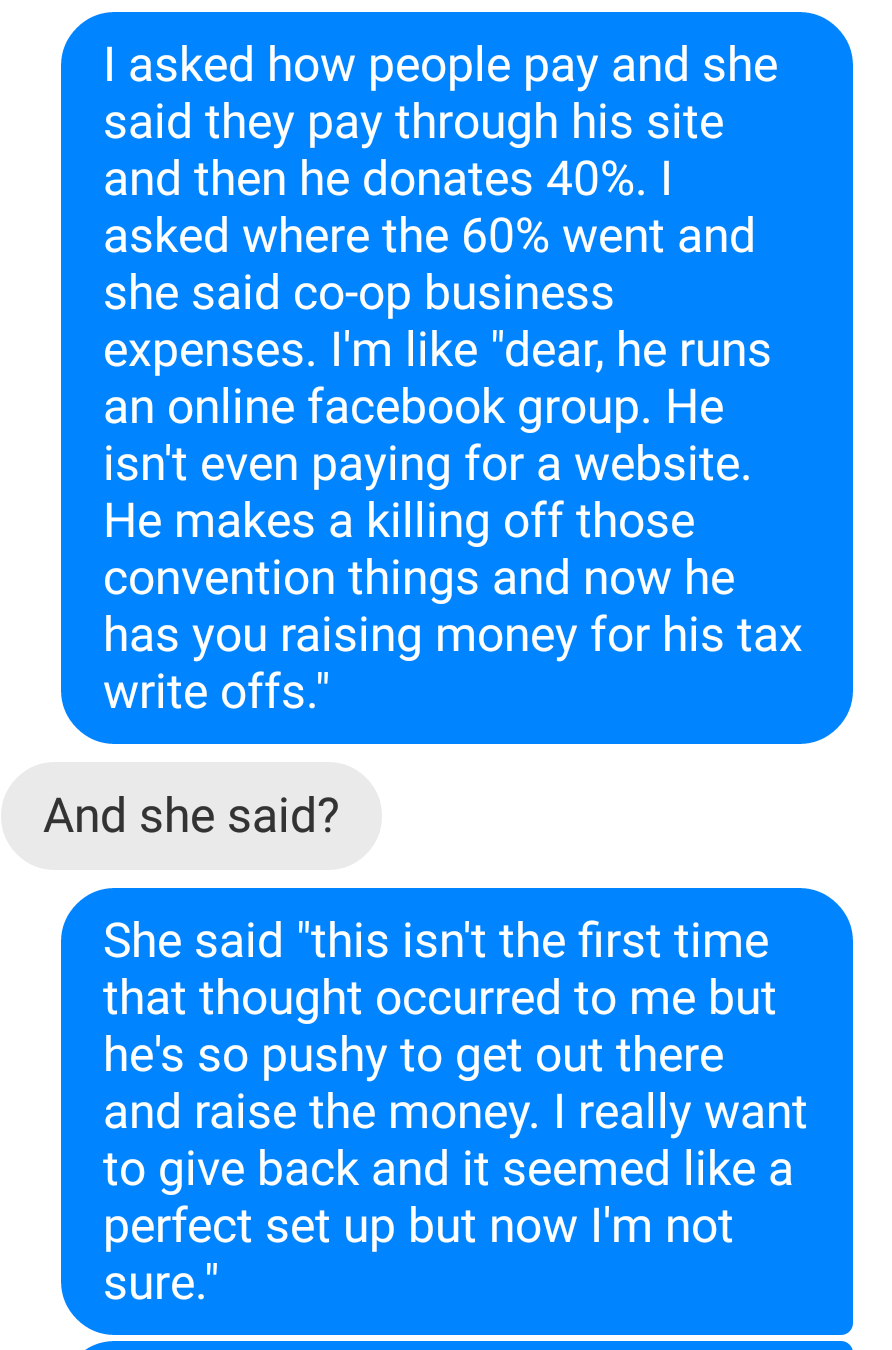 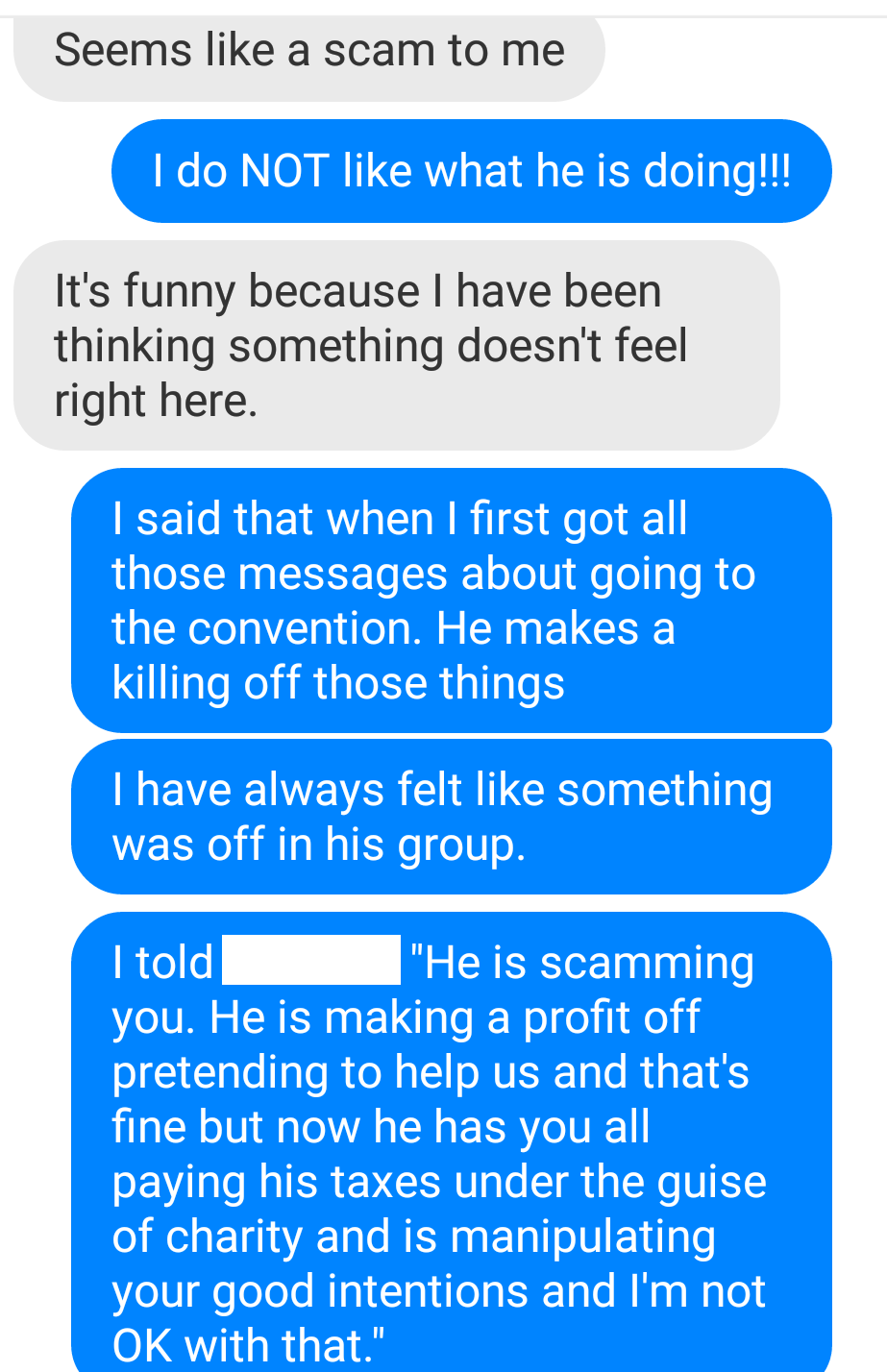 After chatting with my friend, I decided to go right to the owner of the group and express my concerns. Fake DV causes are not something that sits well with me because I see the actual women that need help, but can’t get help because funding for the services they need are going into some scammer’s wallet.

During our chat, the group owner shocked me even more by admitting that only 30% of the profits are going to the cause. He was very insistent that he was basically a saint because he was allowing people to use the networking platform (a free Facebook group) for a cause they were passionate about. He then tried to upsell me on one of his stupid conventions. 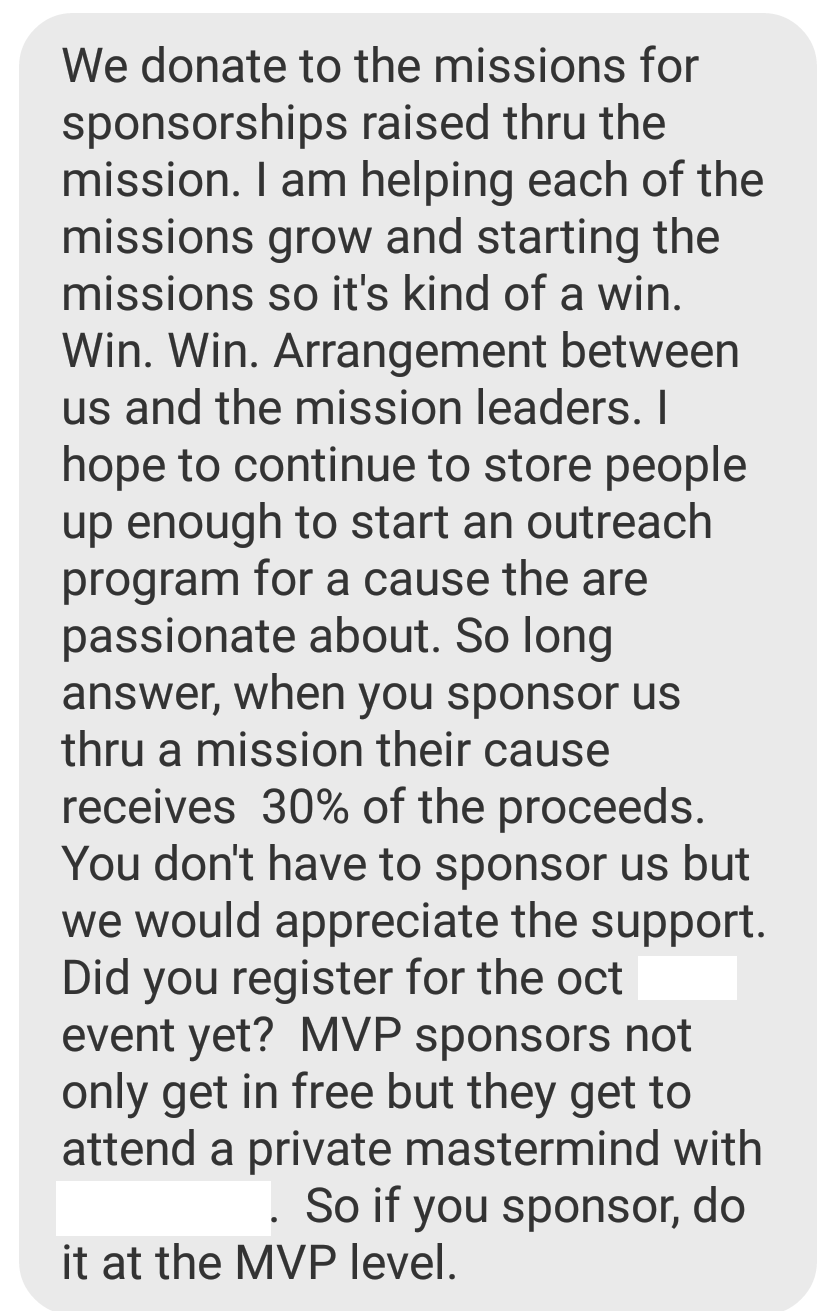 When I asked what a sponsorship does for someone, he said it covers the business expenses of running the group, which doesn’t make any sense because it’s a free group that is handled entirely on Facebook where the members do all of the work. With the exception of his quarterly convention event, there is no actual intervention/work/anything from him whatsoever and the even the event costs are easily covered by the outrageous ticket price that he charges. I kept asking him what a sponsorship does (what are we sponsoring?) and the closest answer I got was “running this Facebook group is my full time job. I need to be able to cover my expenses since I do this full time.” When I asked if the “sponsorships” are what he uses to pay his salary, he said yes. I told him that business person to business person, getting people to buy sponsorships for an online group where the members do all the work themselves was pretty impressive.

He seemed quite pleased with himself.

But when I asked him why the DV mission group was soliciting donations for a group they aren’t affiliated with (The National Coalition of Domestic Violence) and that the donation requests don’t say anything at all about the networking group or sponsorships, or the fact that only 30% of a donation actually goes to the cause, he stopped talking to me.

I then sent this final message to him. 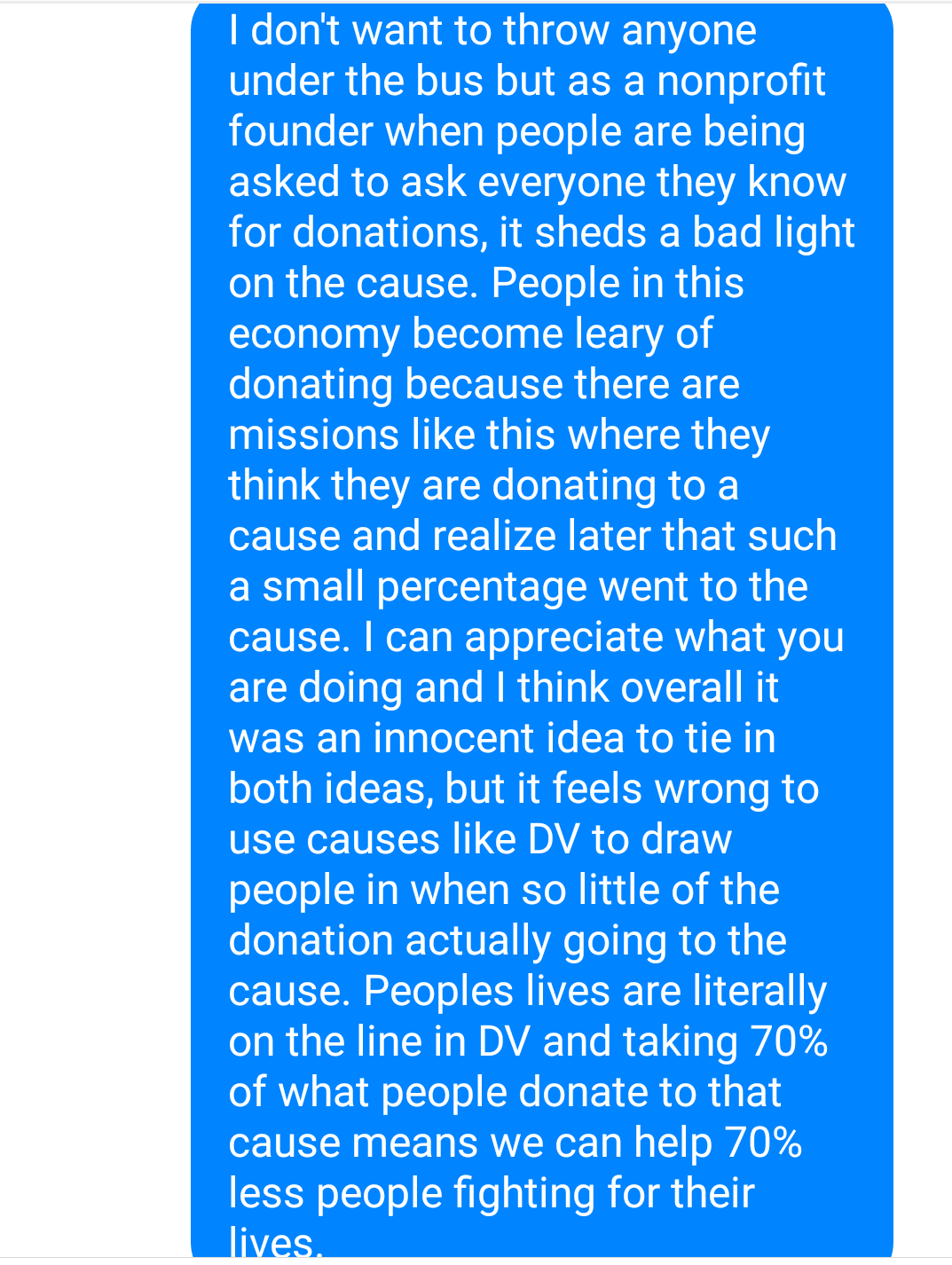 My very best guess, like I said before, is that he has found a way to take passionate people, hype them up about raising money for a cause, pocket 70% of the funds they raise, and then has ingeniously structured it so that the 30% donation is made by him and can be written off as his personal business tax write off.

The dude has other people making his money and paying his taxes.

I then reached back out to my friend. 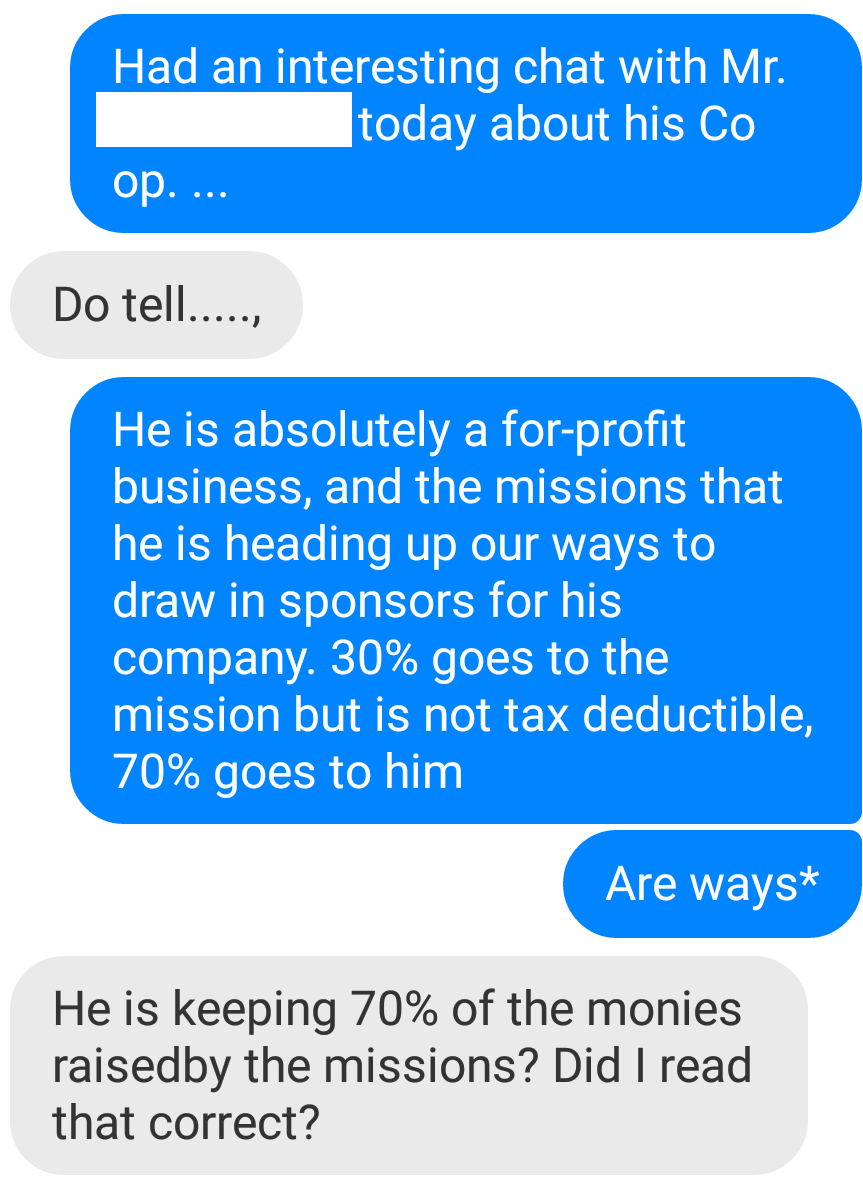 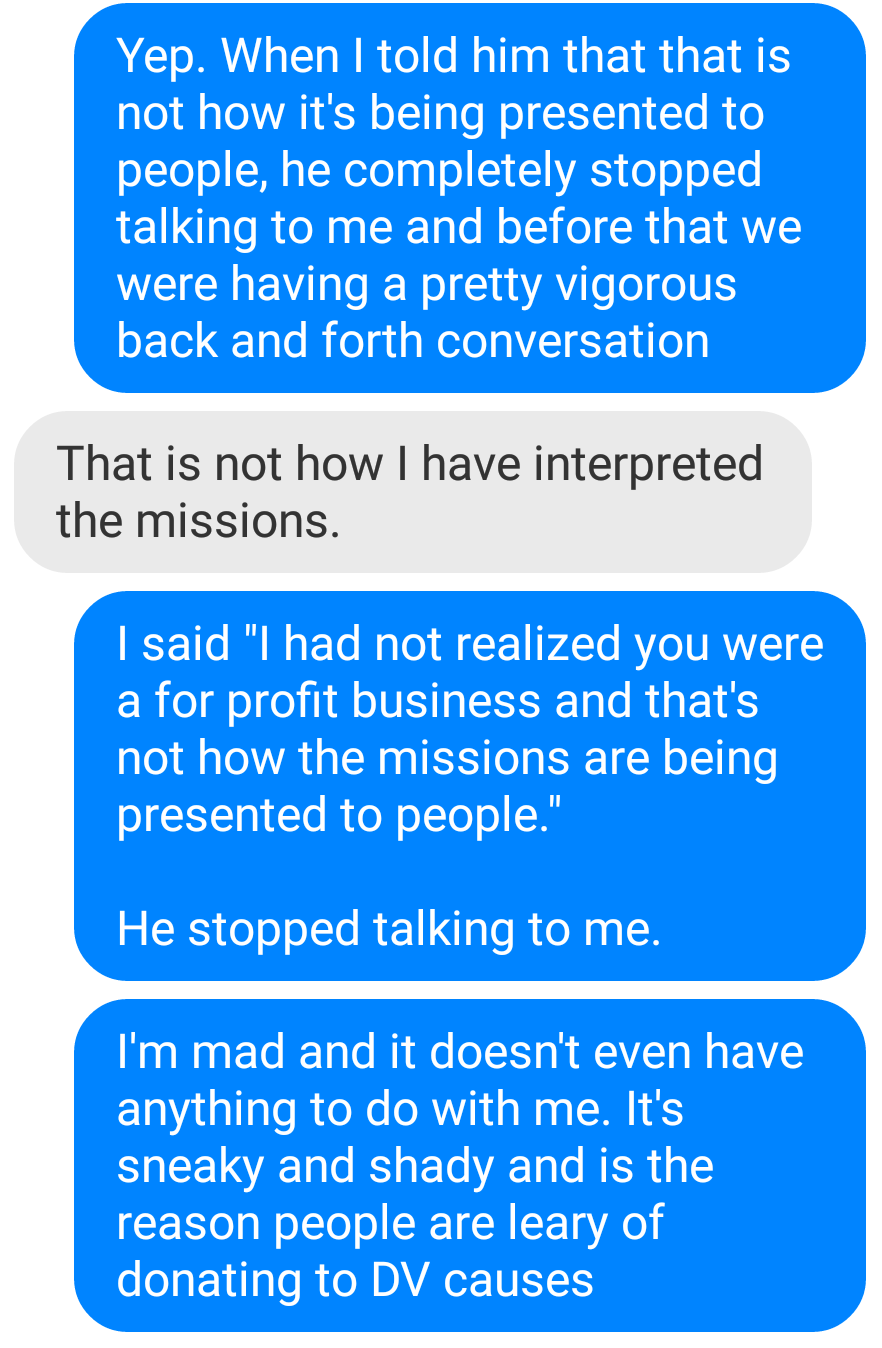 Then the next day, my friend alerted me that this was going on with the DV mission: 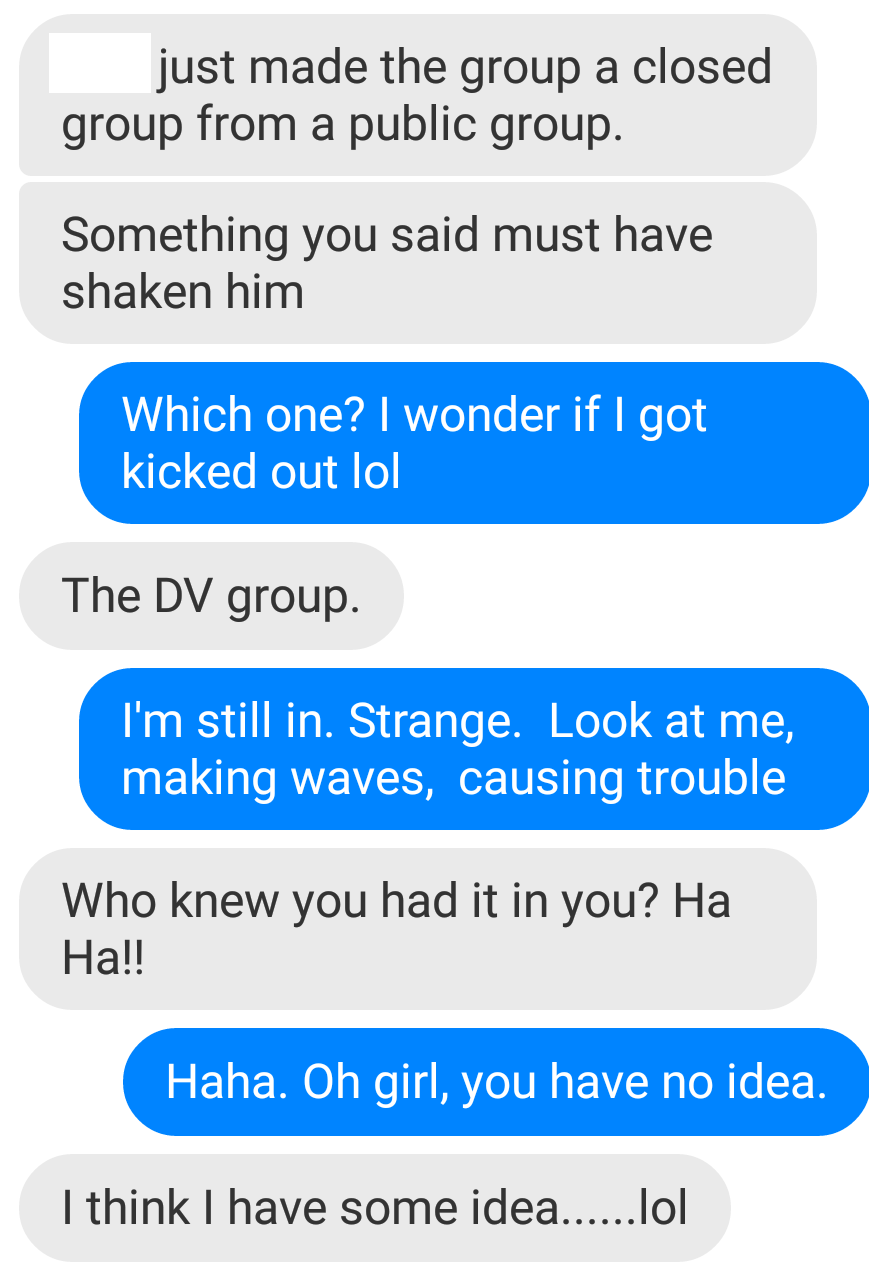 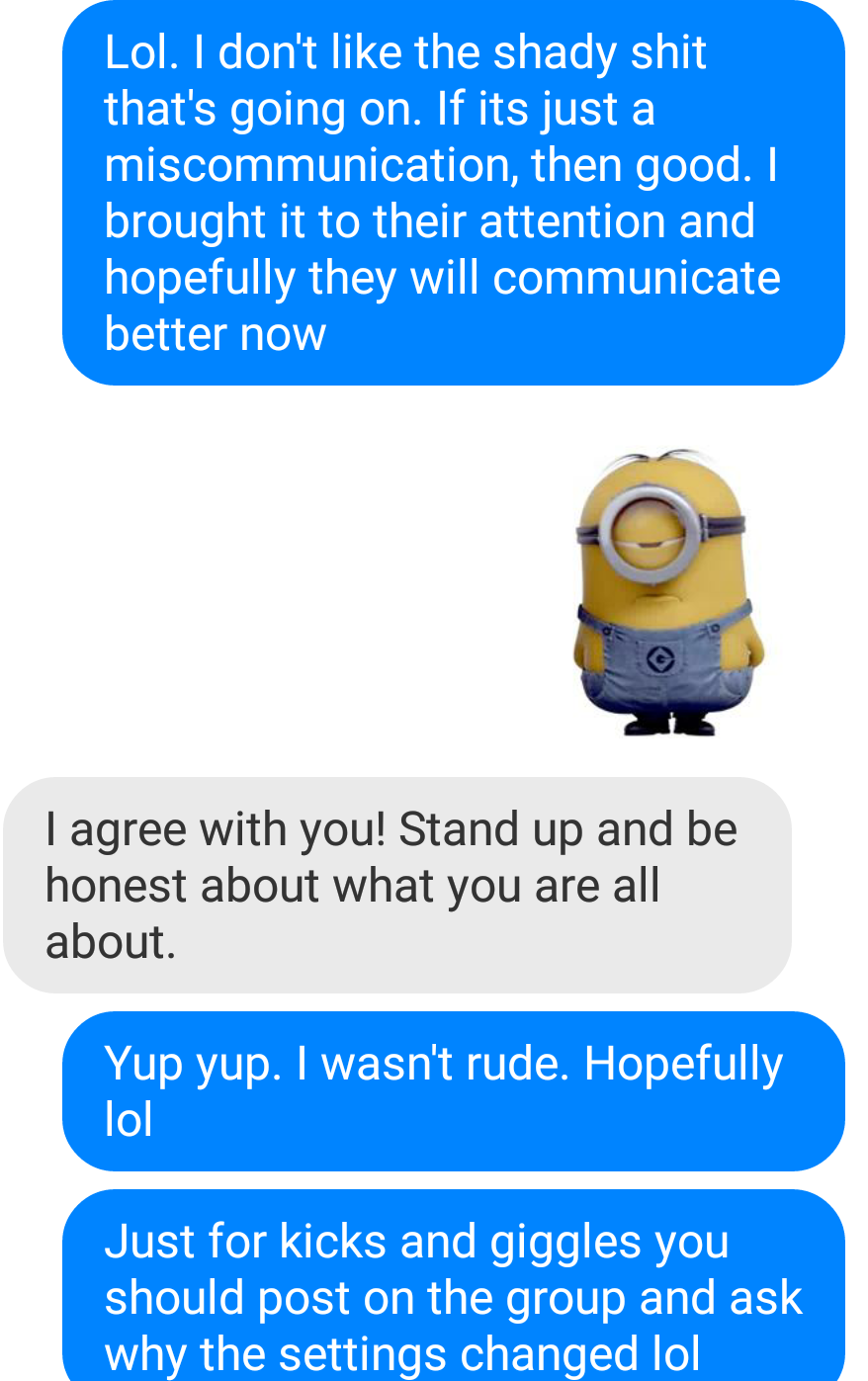 Later that night I received a message from the group owner asking what nonprofit I was and then two minutes later the DV mission leader messaged me and said “surprise, guess what! The DV mission will now be raising money for you!”

I of course immediately told my friend. 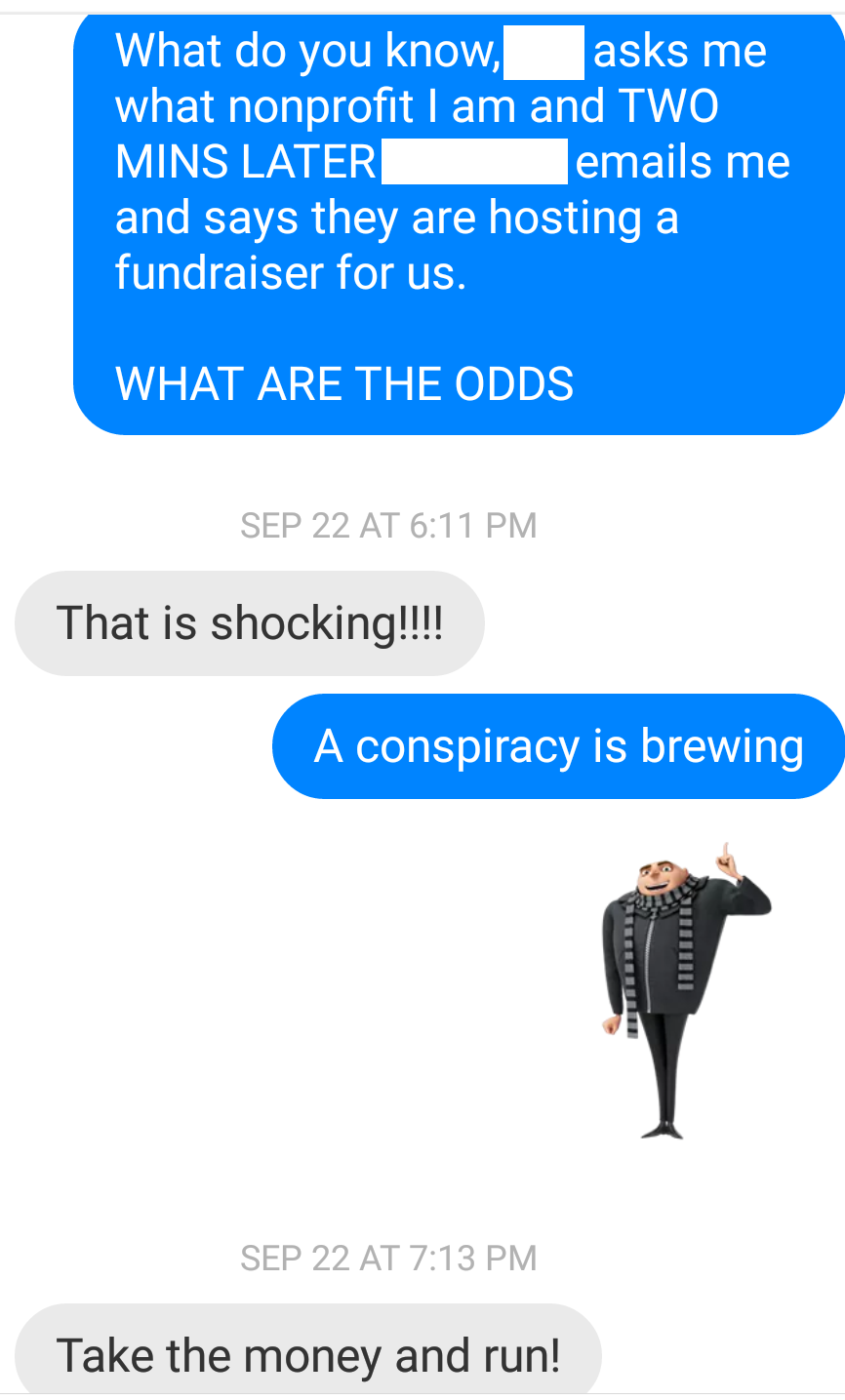 Hum… nothing like a little hush money to try and shut me up! I declined because no matter how much my group needs the money, I don’t want anything to do with whatever is going on over there.

Back to my friend. 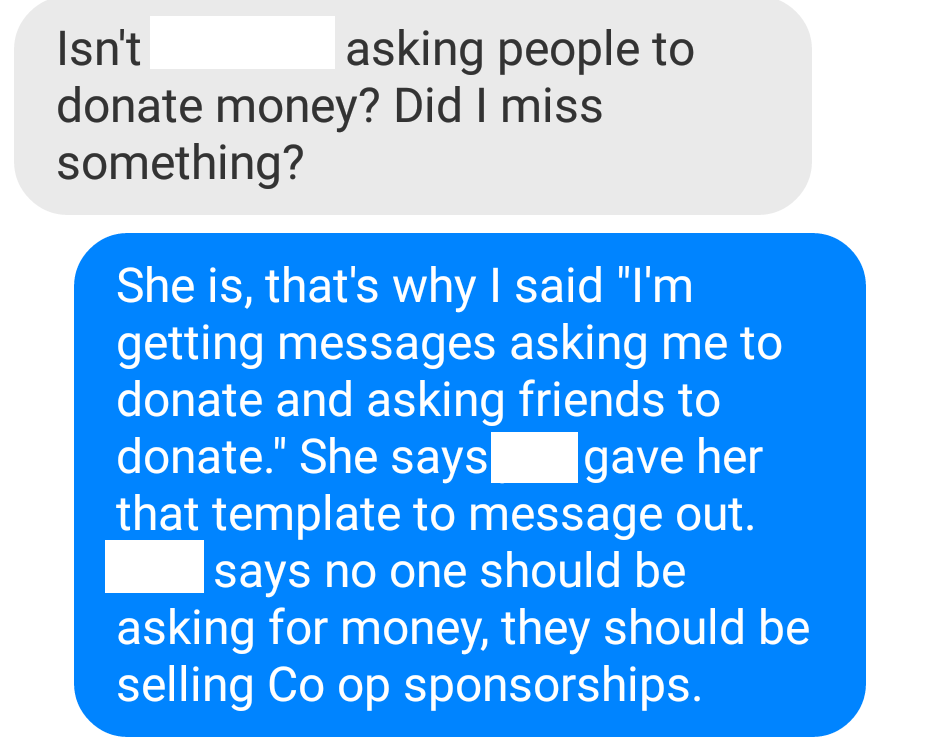 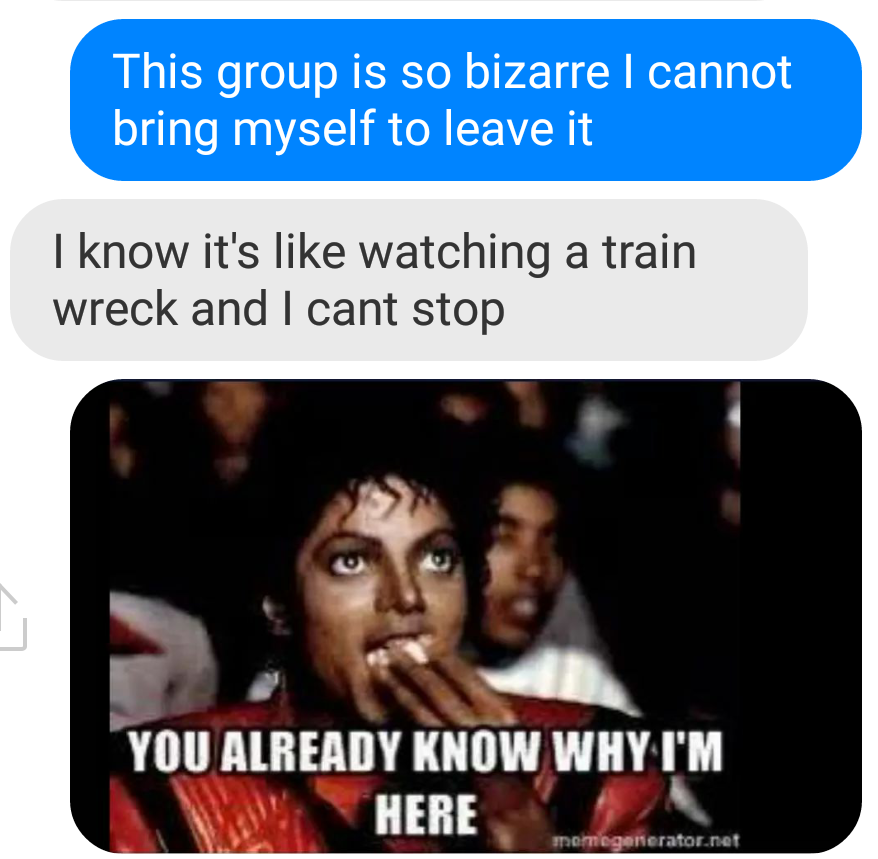 Then something even weirder happens. 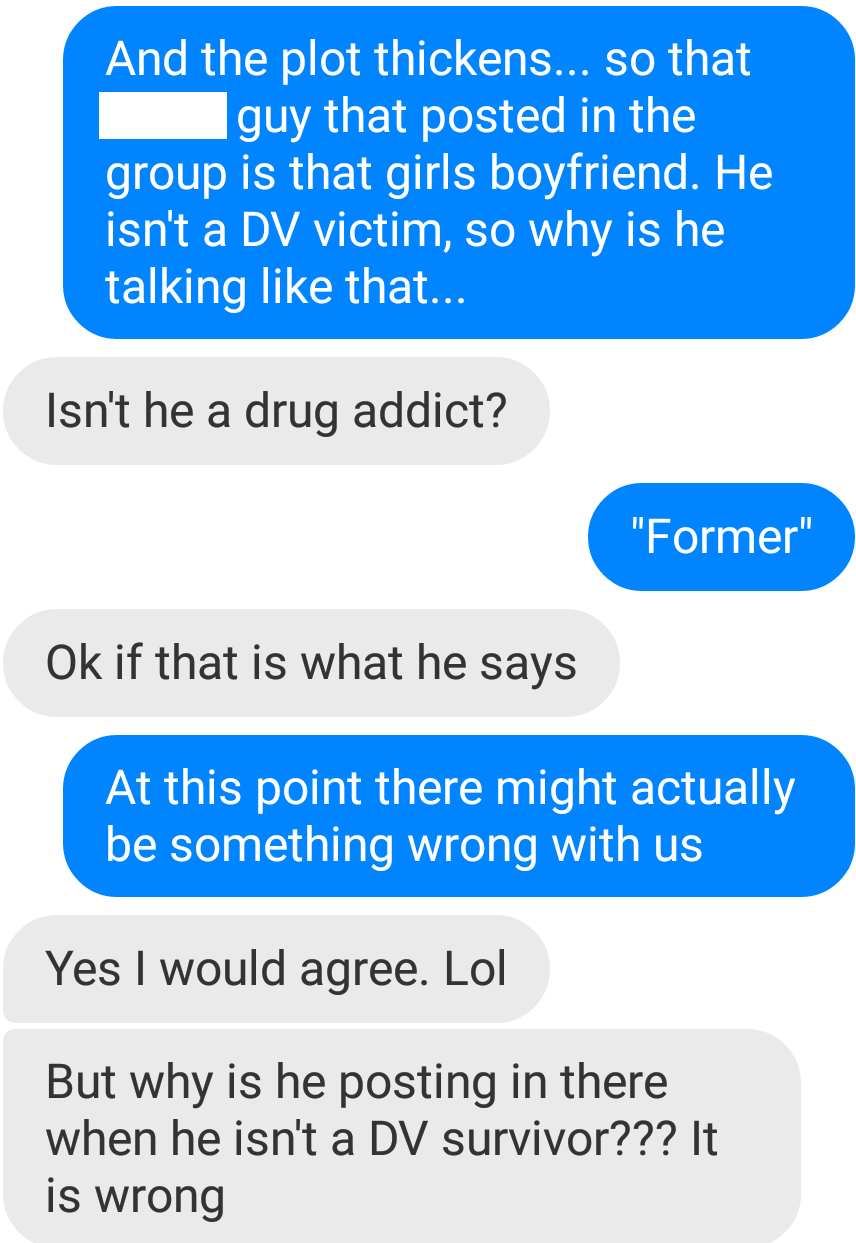 The mission leader’s boyfriend had started posting in the group about how proud he was to be a DV survivor and this is why we need to band together and raise money for the cause. For a very bizarre reason that I can’t even get into right now, I know this guy. He is NOT a DV victim, yet here he was, claiming to be one and asking other victims to share their stories so that we can raise more money and support the mission.

My friend and I are not happy. 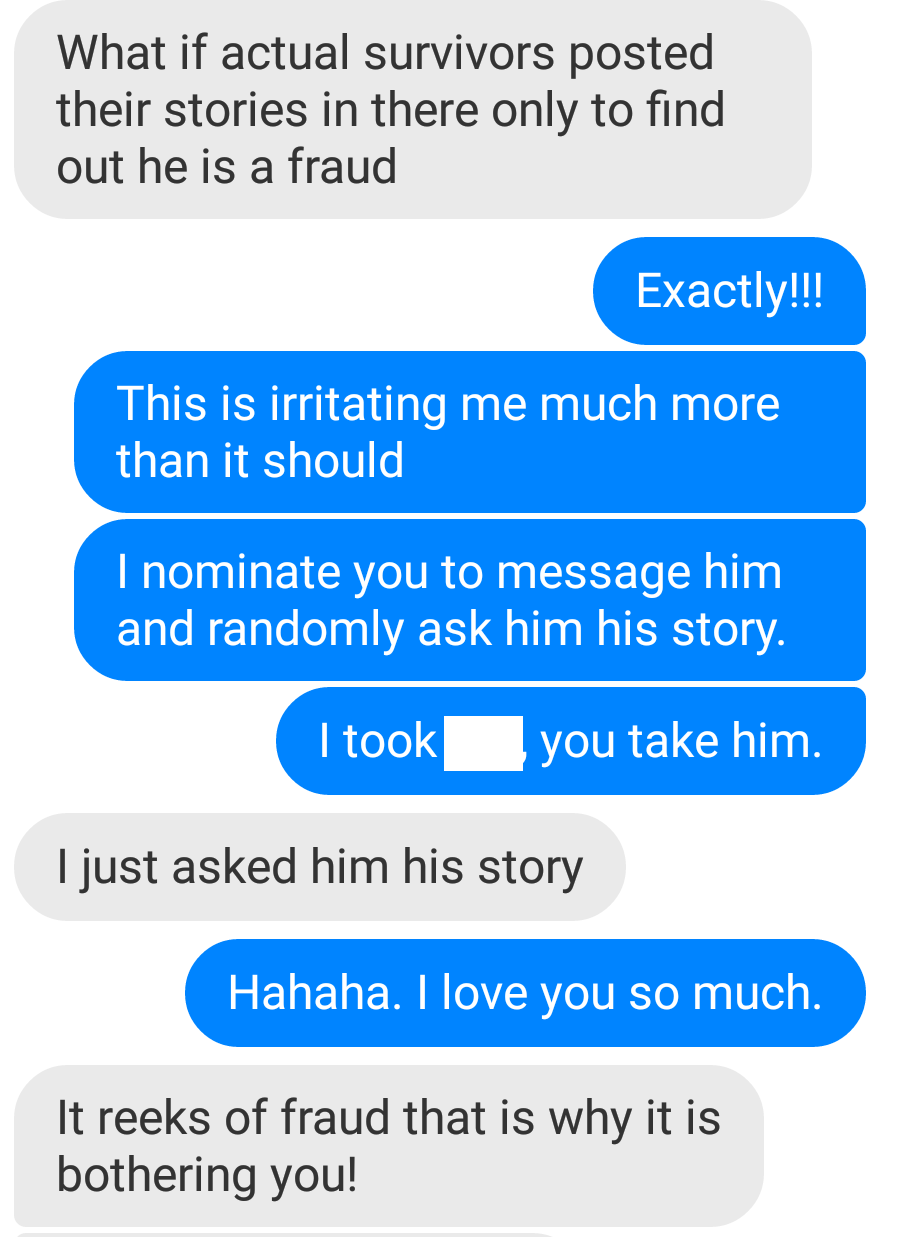 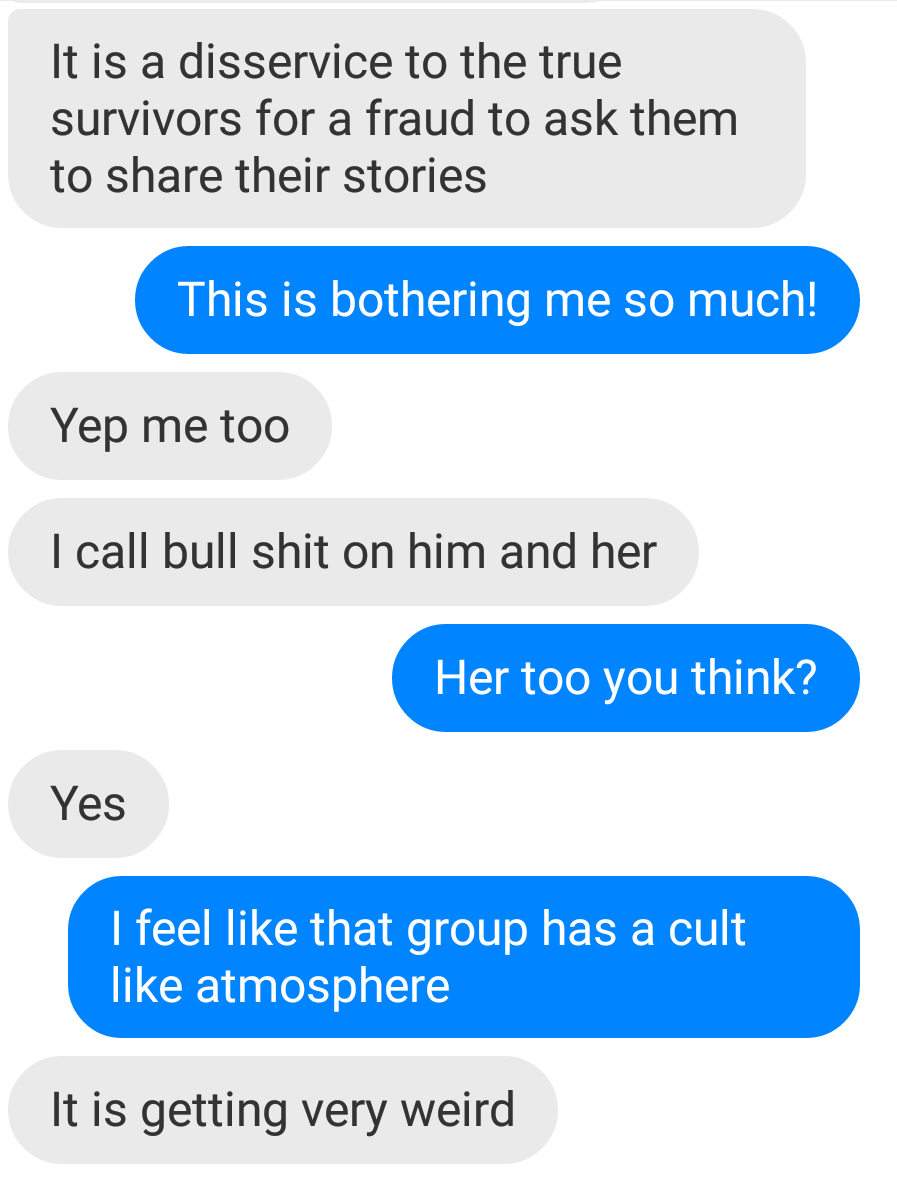 So by now my friend and I have whipped up the theory that the group owner and the mission leader have been in on this little scam together the entire time. I mean it makes perfect sense and now they have the boyfriend ramping up the game.

Our suspicion is only confirmed more when the next day the mission leader starts commenting on her boyfriend’s post, as if she doesn’t know him. They have the same Facebook profile picture and yet she was commenting on all of his group posts with things like “Oh Bob, thank you so much for being brave enough to step forward and help out the mission. If you ever need to talk please let me know” and he’s all “thank you Cindy, it feels good to proclaim my freedom” and then she’s all “yes, Bob we need to raise money so that more people can feel this free.”

My friend and I noticed right away. 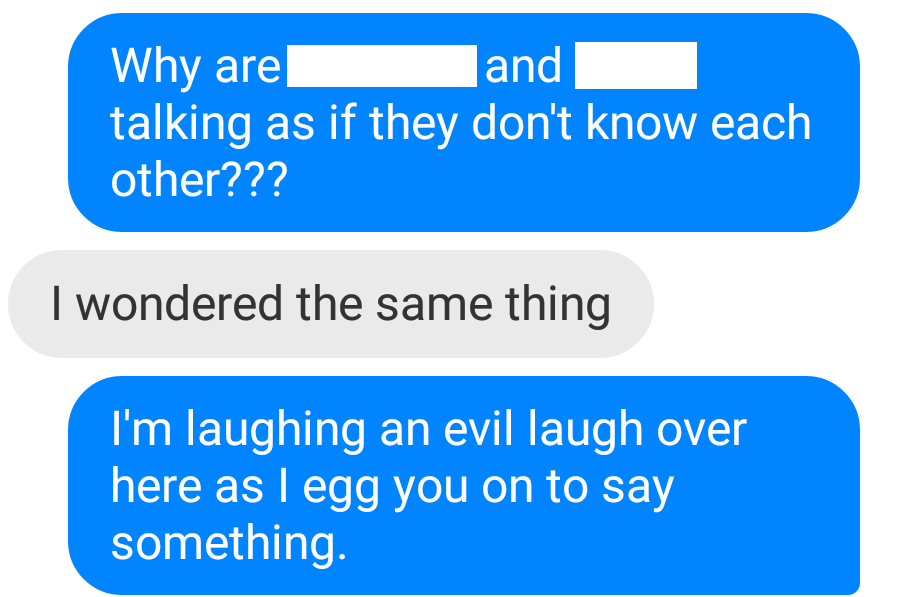 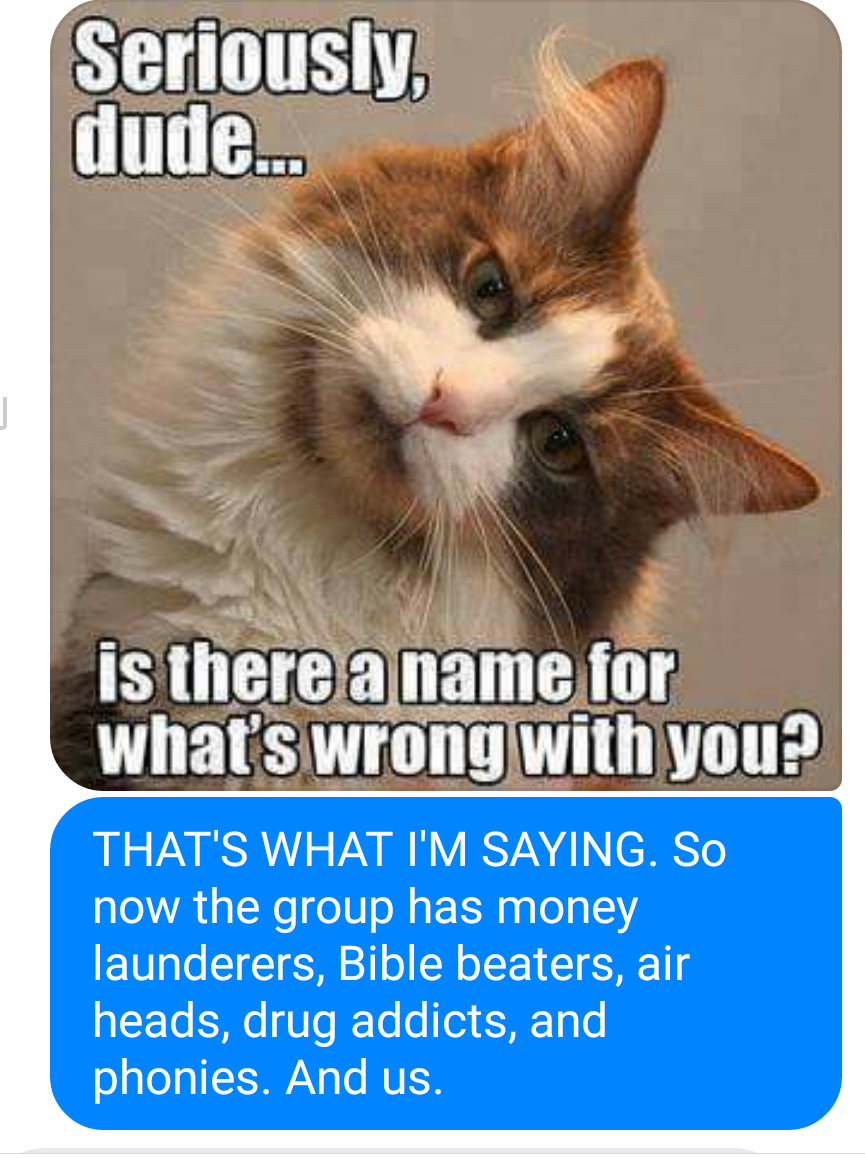 So now, we have 3 people infiltrating the DV nonprofit world. I’m not sure what to do about this, but my friend and I are on it. 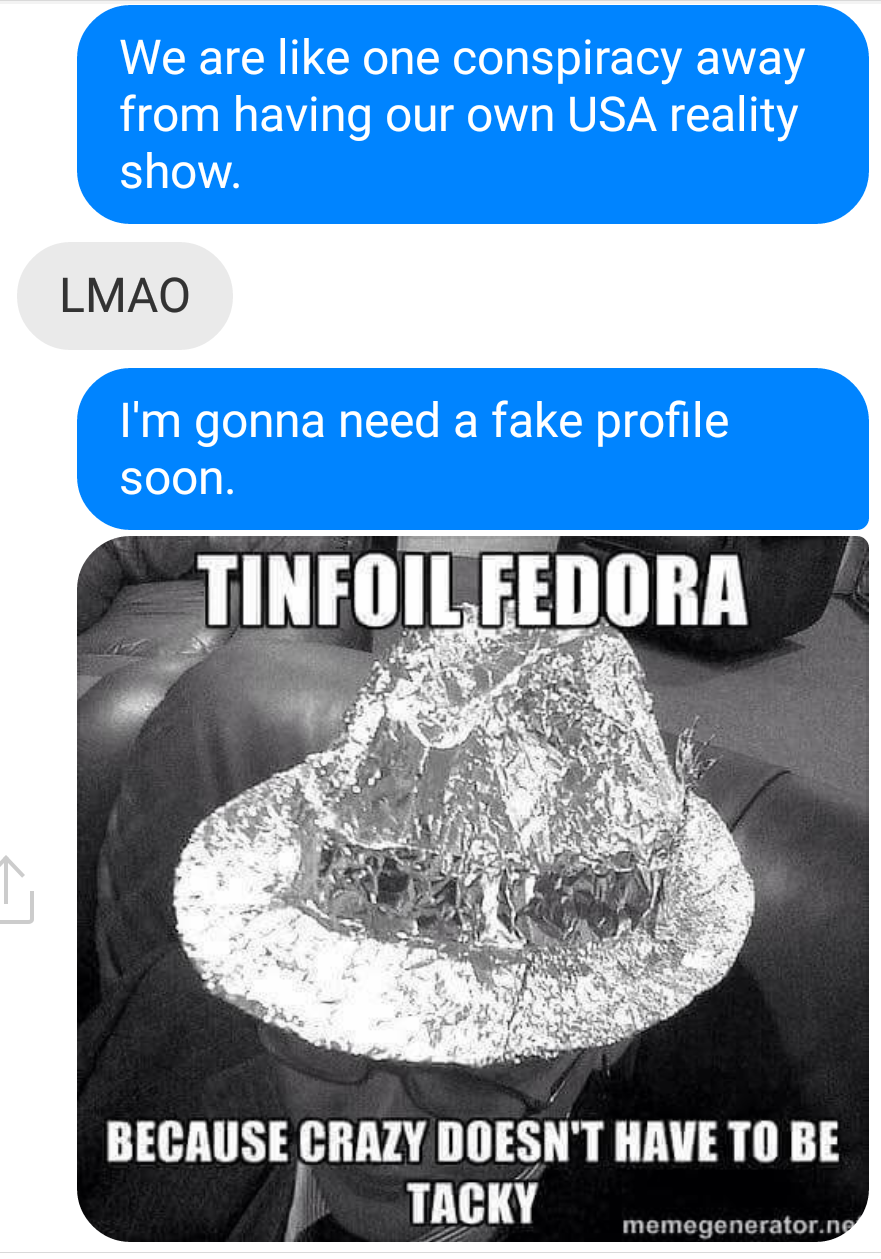 Something is NOT right here and after literally JUST losing my friend to domestic violence, I am not about to allow a fraudulent domestic violence group, steal money from right off the graves of the women that needed help.
Oh hell no.
Stay tuned….

Even More Surgery On Friday; A Message About Flat Tires And Broken Dreams

My Friend Was Murdered