It Mattered In The End

****** TRIGGER WARNING******
This post deals with the subject of death, and although I think that the overall message is worth discussing, I respectfully wish to warn you that some may find this post to be upsetting. Should you choose not to proceed through this one, I look forward to your return next time.
*********************

Towards the end of winter last year, we had an unseasonably nice day that also happened to fall on a weekend. Finally able to enjoy venturing out of the house again, The Guy and I were looking for something fun to do. But after contemplating how crowded the zoo would be, and realizing that most of the farms near us were still closed, I suggested that we do something different, and visit the local historic cemetery.

“A… cemetery…” The Guy said slowly, as if he were trying to mentally absorb the meaning of the words.

And because he is exactly my type of person, off we went to the cemetery, taking the kids with us.

We spent the next four hours wandering through the rows of headstones, while the kids did crayon rubbings over the words. The Guy and I chatted about the husbands and wives who were buried side by side, and contemplated what life must have been like for them to have either lived decades without each other, or passed away only days apart. We saw the headstones of families that clearly had died in wealth, while others eluded to the fact that they most likely died while living in poverty. There were men with multiple wives resting next to them; proof of the intimate moments they had gone on to lead — one after another — without the one that they had left behind. And then there were families with centuries of descendants who had died decades before others were born, all grouped together; sharing nothing more in common then a last name, an ending fate, and the fact that their physical resting place will spent forever together. 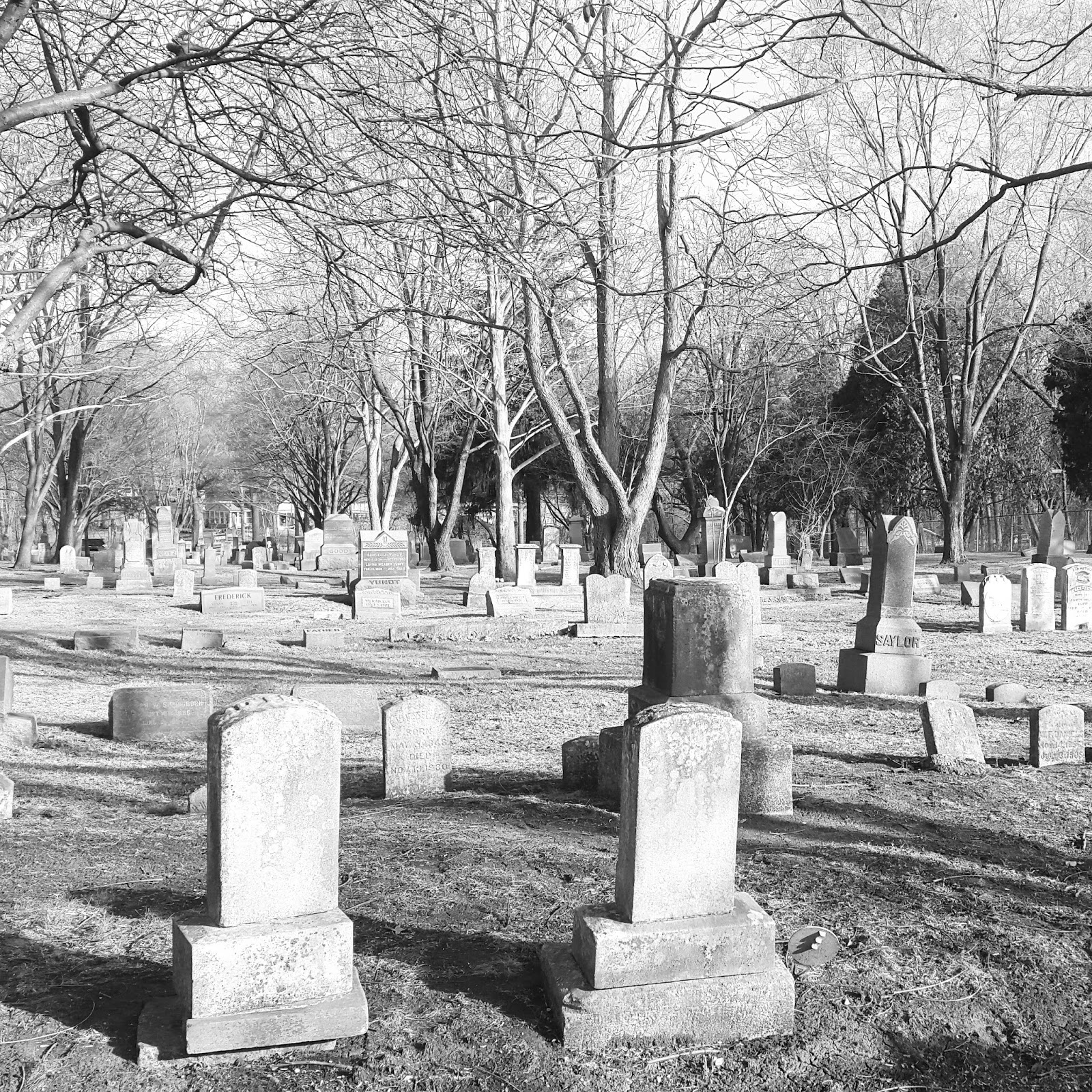 “Wow!” The Guy exclaimed when he came across the headstone of a woman who had lived to be over one hundred years old, and had died in the early 1800’s. “Can you imagine living to such an old age in a time when most people were lucky to see their thirties?”

I stopped for a minute and stood by her grave, wondering who she may have been, and what she may have done. “Can you imagine living 100 years, having an impact on the people you knew — possibly changing the entire course of their lives — and yet now, no one knows who you are, and all the memories of you are gone?”

“Way to kill the mood Eden,” he said, as if the mood in a cemetery is typically gleeful and happy to begin with.

“No, really,” I replied, as another grouping of stones caught my eye. “I’ve been walking around looking at all these stones, and I see groupings like the one I’m standing in front of now, where three kids from one family died, ages fifteen to eighteen, with two of them dying one day, and the other one dying the very next day. I wonder if it were a carriage accident, or something like that, because neither of the parents died at that time, like you might expect an illness to cause.”

Standing there, looking down at the three stones and wondering who the teenagers might have been, I followed up my thoughts with something to the effect of “I know they always say that you never know when your life is going to end or how much time you will be given, but here we are, one hundred and fifty years later, and we don’t know the difference these kid’s short lives made, compared to the one-hundred year old woman’s long life. These people were all here, and then suddenly they weren’t. We have no idea who they even are, because in the end, it’s all just gone.” 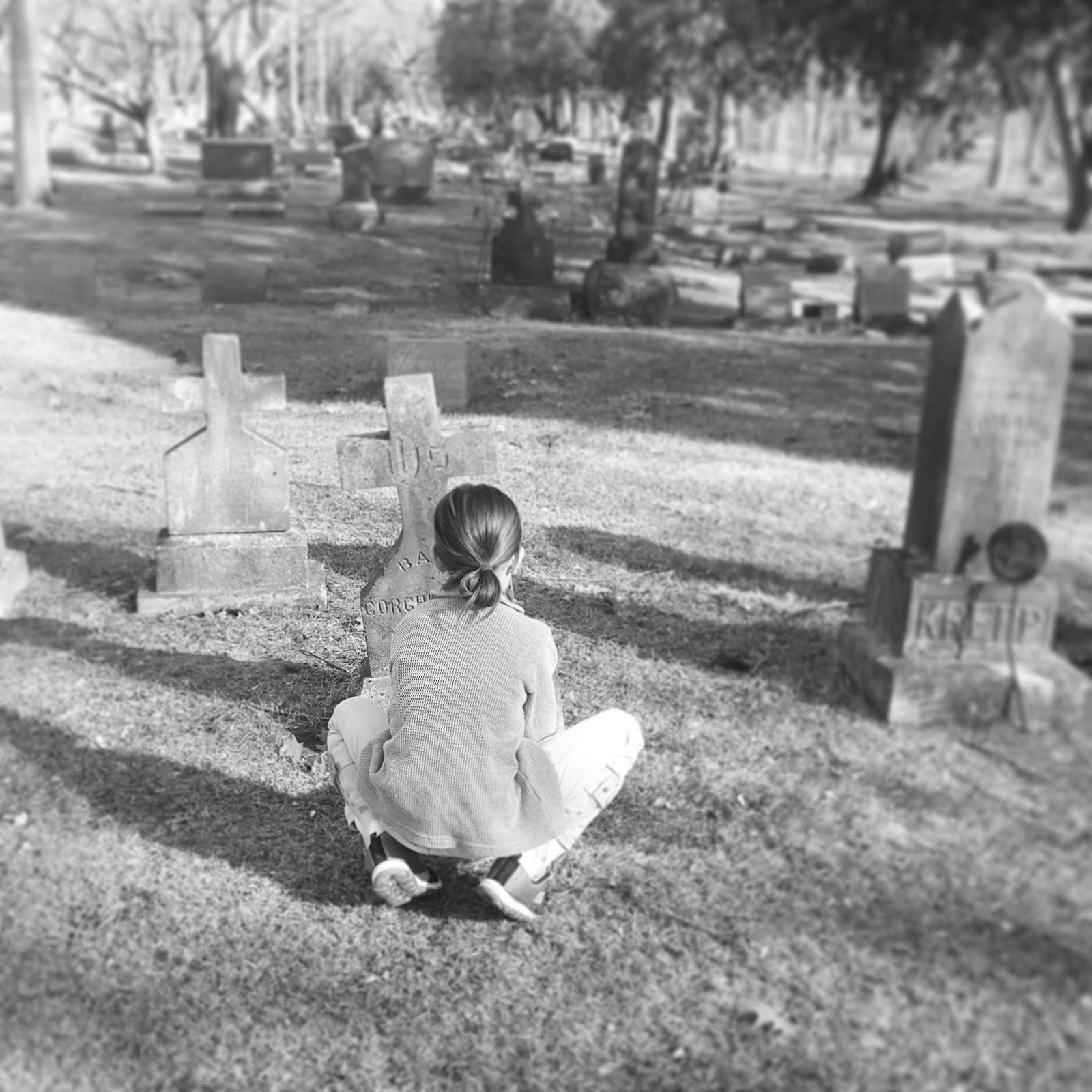 Walking along in silence, the air felt heavy as the understanding of the fragility of life, and the certainty of death, sunk into my soul. I began to wonder not just who I was walking among, but also how they had lived, died, and if any of it had been worth it.

I then came across a row where a husband and wife were buried, and next to them, five babies were buried who were all born roughly nine months after the previous one had died. Most, sadly lived less than a month — one baby living only a day — and the one to live the longest, had died at two years old.

“Wow,” I said, as the emotions swelled up inside of me. “Because all the kids died died as babies, one after another, and they had no children that ever really lived, they must have been passing on some genetic disorder that was not survivable. I can’t even imagine going through something like that in a time when you wouldn’t have had the medical knowledge to even understand what was going on. A mother and father desperately wanting a child to hold, and instead, having only children to bury.”

We then stood there in silence —The Guy and I — because we were both aware that if myself or my children had been born during the same time, there is a good chance that none of us would have survived either.

“I was wrong,” I said suddenly to The Guy. “We don’t know the stories of the people who are buried here, we can only guess. It’s strange to me that there is a one-hundred-year-old woman here who saw things that I’ve only read about in books, and yet the only thing I know about her, is her name. But just because I don’t know about her life, doesn’t mean that I haven’t seen the evidence of it. I don’t know how many lives she changed, and how many lives those people went on to change. I’m standing here looking at the headstones of an entire family, and I can’t even fathom what that mother went through who buried five babies, because she lived that experience for me. At some point, a doctor came along and started researching genetic disorders, because families like this lived, and died. We are where we are, because those lives existed. We stand here and we look at all these people who lived and died and the only knowledge we have of them is how many days they spent breathing our air; but what we don’t know is how much those days mattered.” 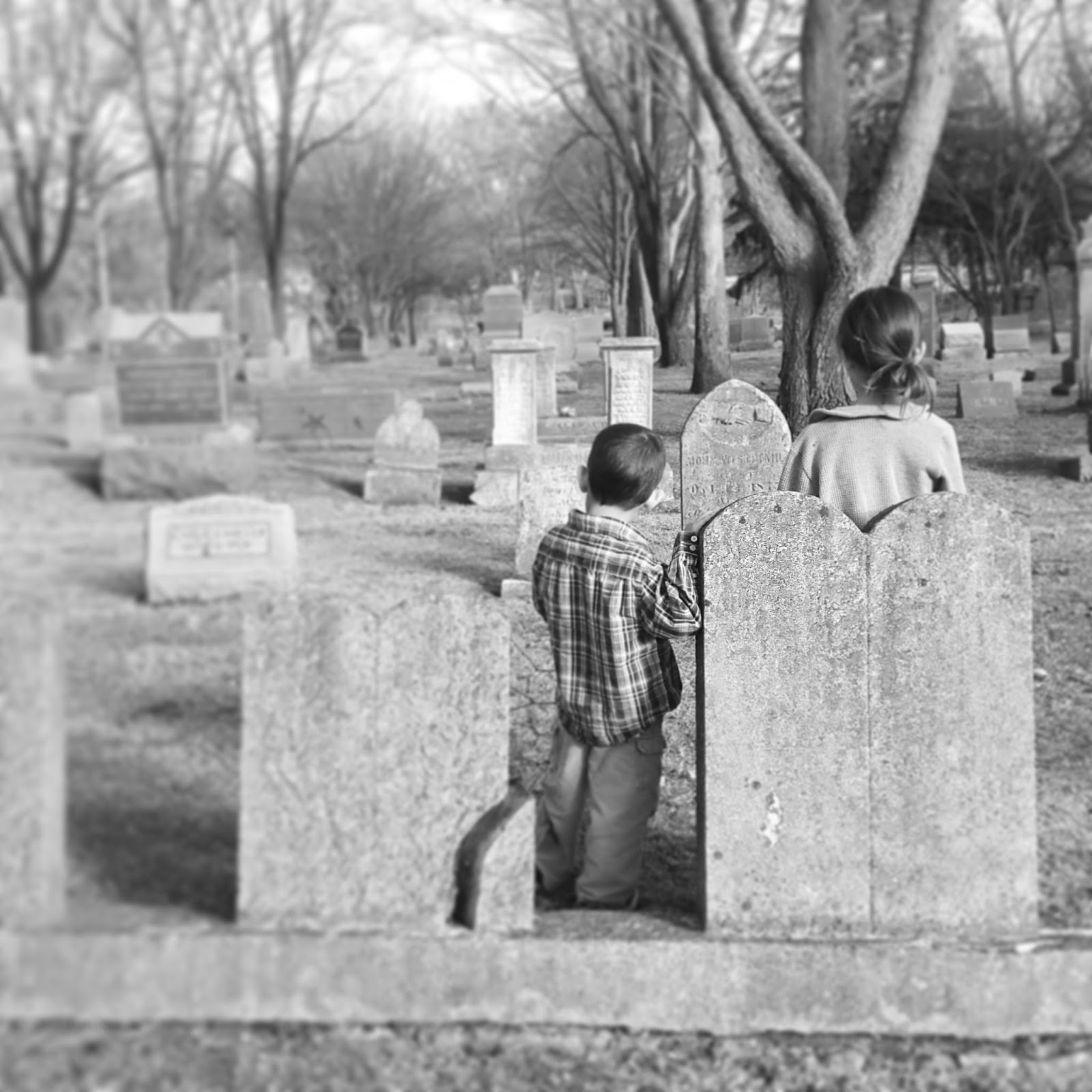 “No, we don’t” said The Guy in agreement. “It’s like your nonprofit; the lives you are touching will undoubtedly go on to touch someone else.”

Too often we find ourselves so trapped in the daily grind, that we fail to realize that our days are rolling into years, until we suddenly look up and wonder where it all went. We question if anything we are doing really matters in the end, and the answer simply comes down to in the end, did you accomplish something that mattered?

Did you spend all your time on Facebook, or leaving good children to the world? Did you die with extra money in your bank account, or did you leave your legacy with the client you helped, even if they could not pay you? Did you make fifty people smile, or did you have the cleanest home?

I don’t know the life stories of the people I walked among at the cemetery, but it doesn’t matter.

They came, they lived, they died, and in between, hopefully they conquered. 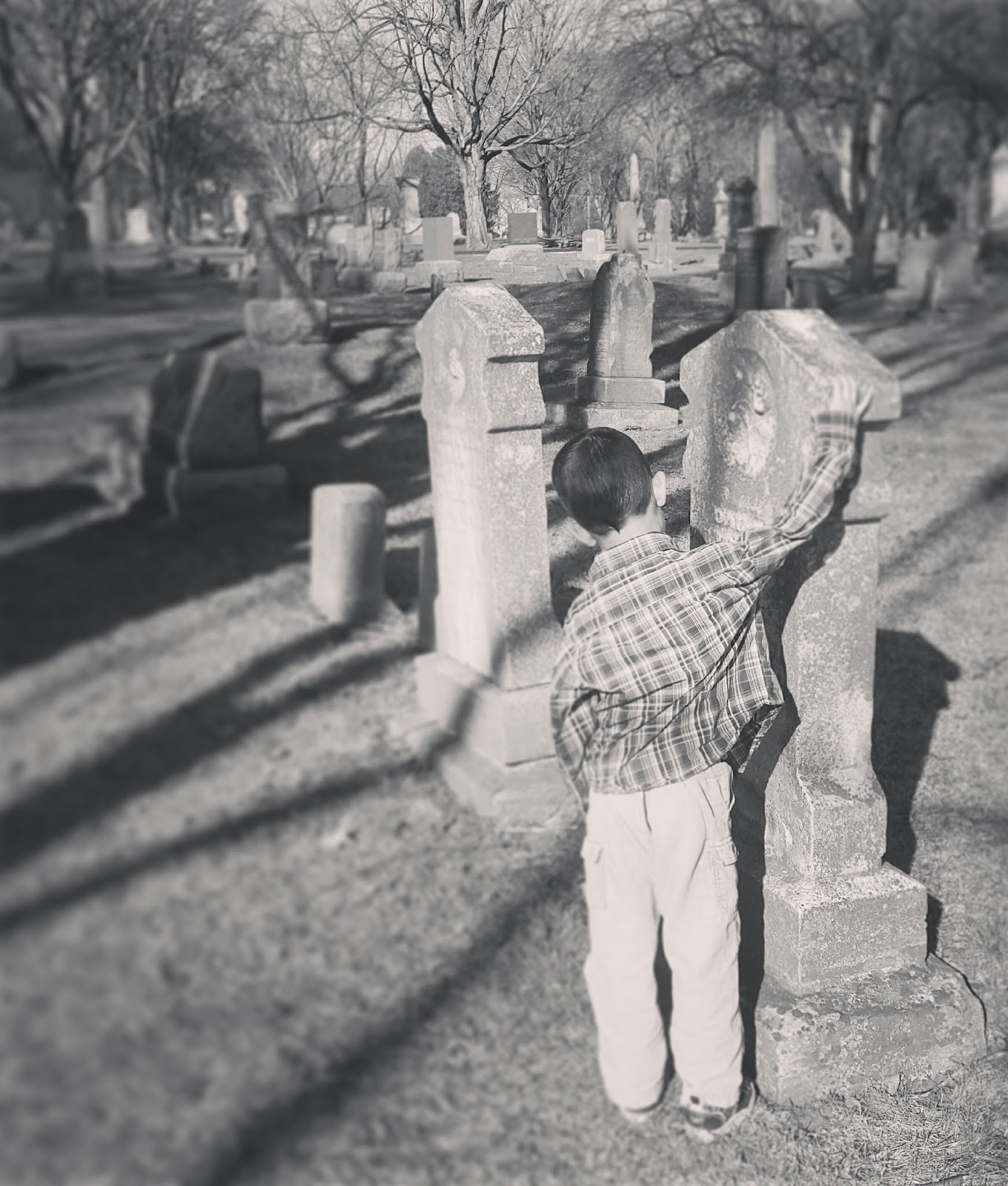 If you remember from my last post, I was struggling a bit.  Feeling stuck by the monotonous tasks of daily living, I was questioning who I was, what my place is in this world, and if anything that I was doing, really mattered.

You may have noticed that my posts here have slowed down a bit, but it’s only because I’ve been a bit busy elsewhere.

I feel like for the first time in a while, I’ve found my way again. None of it happened overnight, as it may sometimes appear in Blogland, but rather this has been a process that I’ve been undergoing for quite a few months, and maybe I’m just now seeing in a different light. I still can’t see the full picture yet, but I’m not sure that any of us really will until it’s all over, so for now, I see enough.

I’m starting new projects such as taking on more of a journalist role at Babble, and expanding my nonprofit, Rise From The Ashes, which provides pro bono legal representation to women in domestic violence shelters. And when I was asked to join the team working with Disney’s $100 million dollar commitment to bring happiness to families who have seriously ill children in the hospital, of course I had to say yes. Add into that my sweet children, my husband, and some health issues that I am still tending to, life has been a bit crazy around here!

But these days that I’m living, all of them, they matter. Whether I’m living for myself, my legacy, the future, the afterlife, or my life right now, they aren’t just passing moments, gone with the tick of the hand on a clock. They all add up to mean something, and you, just like everyone else, also have days that matter because you are someone important. You are worth more than what has hurt you, exhausted you, sucked the life out of you, and clouded out what you wanted when you started out on this journey of life.

Maybe thus far, you haven’t lived a life that would lead you to believe this. Or maybe right now, you are leading a life that makes it hard to believe. But if my story, and you being here for it, has taught you anything, it’s that it still all matters.

It did for me, and it does for you.

We are all living the only life that we will ever lead, right now.

If you feel stuck in a rut, change it.

If doing the same thing day in and day out has left you wondering if any of it matters, then stop doing things that make you feel like nothing matters.

You came, you lived, you’ll die, and hopefully in between, you made it worth it.

It Was An Accident, I Swear

I’m Lost, And I Have No Idea Where I’m Actually Supposed To Be