I seriously have the weirdest dates. Like the time that I showed up and it was WOMAN who was dressed as a man, but clearly, not a man. Now I’m all for gay/lesbian relationships, I just don’t want to be in one. I’m a little partial to parts that are permanently attached to a man. Preferably one with amazing teeth and an awesome sense of humor. Or there was the guy that spent the entire date talking about how he usually only dates woman over 50 because they are kinkier and how he videotaped his “date” last week. Ew. Just Ew. There was also the guy that told me on our first date that he was a sex toy designer and asked me if I was a customer. Or the guy that asked, on our first date, if he could lick my feet. “Um..do you have a foot fetish?” I asked him. “Oh! You have heard of us!” he exclaimed. “Us? Like, is there a club or something? Do you get like a t-shirt or free socks?” He was not amused. Sometimes I am a little smarter and I dodge the bullet before it actually hits me, like when I got a picture text message from this fine lad: (I blurred his face for privacy reasons) 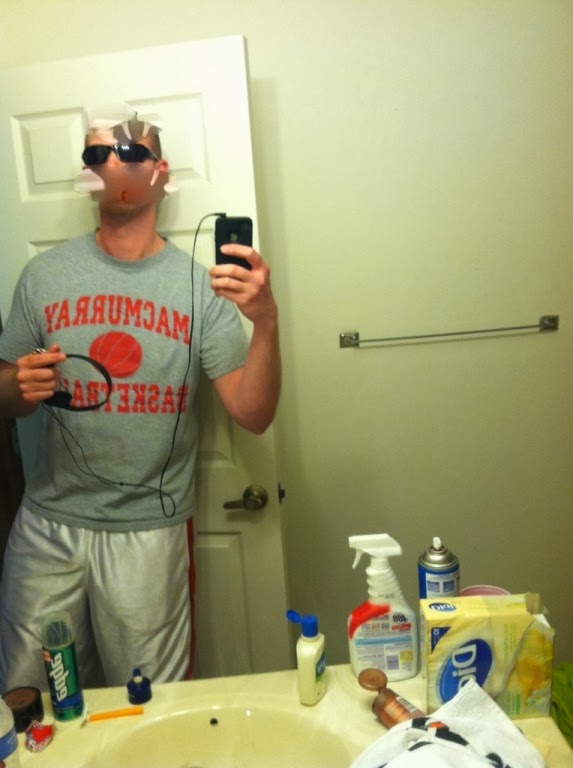 “Sup Girl. Your friend showed me a picture of you and gave me your digits. I’d love to cook dinner for a sexy gurl like you. Hit me back and lets do this thing.”

Now I took into account the circa 1980’s headphones, the fact that he has enough product to stock a gas station toiletry aisle, and his sexy indoor sunglasses, and I responded appropriately:

“Hey man. I’d love to, but I think you are just way to cool for me. Peace out Brotha.”

So anyways, a couple of weeks ago a friend wanted me to go out with a guy she knows, and after three weeks of arm twisting, I finally agreed to go just to shut her the hell up.(Seriously, friends, stop setting me up. I have no cats, I am not 65, I don’t want your pity dates. I know that you aren’t reading my anonymous blog, but I’m really doing fine without you!)  Anyways, for the purpose of this post, I’ll call this dude …..Sparkles. I have no real reason as to why I chose that name, but I couldn’t think of anything else and this is sort of a fluff piece anyways, so why the hell not.

So we meet for dinner and Sparkles starts out by asking me the standard date question. “Do you like to go camping?” Seriously. What is with every guy wanting to go camping? I’m all up for adventure, I’ll try anything at least once, and I do love the outdoors, but why do you all feel the need to sleep outside? “Hey, you know what might be fun? If we go rummaging around in the dirt, touch a bunch of worms so that we can catch fish, pluck their eyeballs out, cook them, try not to choke to death on a bone, get eaten by 800 mosquitoes, and then, when we are all dirty and tired and digesting bones, we can snuggle together inside a tent an enclosed umbrella while sleeping on rocks and hoping that bears don’t eat us! Doesn’t that sound like fun!?” No….just….no.

“So….define camping,” I say to him. “You know, camping!” He says. “Well, if by ‘camping’ you mean sleeping in a nice hotel with a big picture window overlooking a beach, well then yes, I love camping” I reply. He stares at me. I stare at him. We stare at each other. Well this is going great.

The waiter is weird. Like weird in a creepy sort of way. Like I’m pretty sure he was hiding somewhere in the corner abusively applying chapstick and staring at us. We decide to leave.

We are sitting outside and Sparkles asks me if I want a massage. A massage? Like…here….on a bench? But, because I am stupid a risk taker, I am somewhat intrigued as to how this bench massage works. So, I say “Hell yes, sign me up for that plan.” And so Sparkles starts massaging….MY HEAD. My head people. Fingers like all up in my hair, rubbing my head. Mind you I am FACING him which just makes the whole thing even more awkward. What do you even do when someone starts squishing your head? I’ll tell you what you do. You avoid making eye contact with anyone walking past you. You keep blowing hair out of your mouth. You pray that the phone rings and one of your kids has thrown up and you need to IMMEDIATLY leave. Just when I thought I might actually get up and run away, Sparkles starts playing with my hair. Like running his fingers through it, twirling it around his fingers, and petting me like a puppy.

I cannot even imagine what everyone walking past us must have been thinking.

It can’t get much worse then this right? Oh no HA HA HA, don’t kid yourself! So Sparkles asks me if I have a hairbrush. What the hell Sparkles, what on earth are we doing here? Have you been laid…like ever? Because I can assure you, this is not how it works. So I seize the opportunity for escape and say “Oh yea, I do, but its at home, where I should be going…. to….now…..,” and then I stand up and start walking towards my car.

He sprints ahead and stands at my car door. Crap. Sparkles wants a kiss.

“Ok, well, thanks so much for dinner,” I say while trying to avoid eye contact and any and all forms of human interaction. But then…I break protocol, and I look up. IDIOT. Why the hell did you look up!? He leans in at lightening speed and I turn my head at lightening speed x2. Sparkles rams his mouth into my ear. My earring punches into my head. I reach up and touch it. Its bleeding. “Dude,” I say. “You came in with force buddy, you gotta watch that!”

“I’m so sorry, let me see” he says. I pull back my ear, and FREAKING SPARKLES TRIES TO LICK MY BLEEDING HEAD. “Whoa, whoa!” I say. “I was just going to get that for you,” Sparkles replies. And with that I jump in my car and peel out of the parking lot.

I’m pretty sure I didn’t run him over.

But…if anyone is missing a vampire names Sparkles….I know nothing.

I think having so much still shut down, to is star

For the momma's with a nervous Little ❤️ . Lin

Remote Learning or In Person school for the upcomi