Well That Was Scary

I’m going to say right off the bat there is probably a lot of grammer and spelling errors in here. Sorry.

Well that was a lot scarier than I was anticipating. It all started well. I was really surprised because I wasn’t nervous at all. I’ve had two eight hour ankle surgeries before, plus three or four smaller ankle surgeries, wisdom teeth removal, and two natural childbirths, so how bad could a nose be, right? 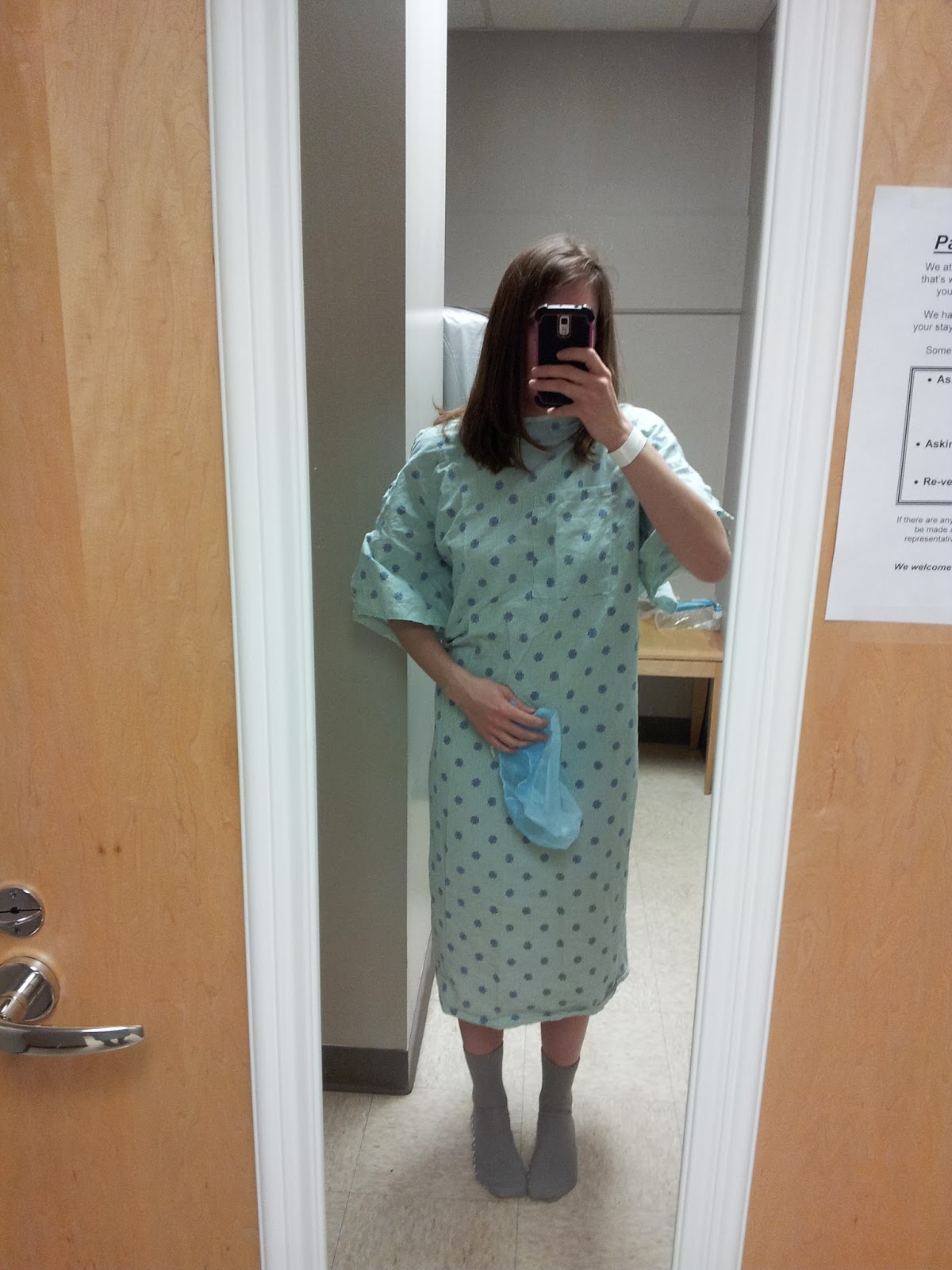 I got there, snapped a few pics of my nifty hospital gear, and waited. The anesthesiologist came in and the first thing she did was touch my hair. “Then she asked me, are these red highlights natural?” I have brown hair, but I do have a lot of red highlights since my family is from Dublin. She goes on to explain that because of that I will be getting a different type of anesthesia that will take me deeper, because people with red hair don’t metabolize anesthesia well. Makes sense, since I have previously woken up twice DURING surgery. So into the operating room we go, I make a few jokes that if they kill me I am coming back to haunt everyone and out I go.

The next thing I know I hear a nurse saying “honey, I put a gluten free cracker in your hand and I’m going to sit you up.” I distinctly remember thinking “Well this is weird, I can totally hear her, but I literally cannot move at all.” Like my brain was waking up, but my body was not waking up AT ALL. So the nurse sits me up and that’s when I feel it.

Blood comes gushing out of….everywhere. Like everywhere. At this point I still cannot move at all, but I can hear everything. I hear doctors running, nurses yelling, something about patient #2 is hemorrhaging. The doctor is forecfully telling the anesthesiologist to put me back out, that he needs to take me back in to the operating room. The anesthesiologist is saying that she can’t intubate me until she pumps my stomach because I’ve swallowed too much blood and could aspirate. I can hear them calling for stat orders from the blood bank and yet I CAN’T MOVE. The doctor comes over and says “honey, I don’t know if you’re awake but you’re hemorrhaging, I need to stop it right now, and I’m sorry but this is really going to hurt.” HE DID NOT LIE. The last thing that I remember was every surgical instrument he owned being shoved into my head, a nurse repeatedly asking me if I had an advanced medical directive, and then I was out.

The nurse said that I kept telling her that they couldn’t let me die because I have two little kids that need me. That they got stuck with a loser ass father and they deserved a mother. I don’t know how I would have said that, seeing as how I don’t remember being able to move, but how else would they have known that? Makes me feel kind of good knowing that right there should prove that I will never be my mother. I could have been dying and I was worried about my kids 🙂

Some six hours later I woke up feeling like my face had been run over by a truck. There was a nurse standing next to my bed and my doc had rearranged the rest of his day in case I needed to go into surgery again. Can we say scary? The person that drove me and was in the waiting room said that they came out and pulled him into a little room and told him that the surgery went great, but that there was a complication and they were in the middle of pumping my stomach and putting me back under. He said about twenty minutes later he saw people running bags of blood in there and then heard the secretary calling for an emergency transport to the trauma unit across the street.

All is well now, I am finally home, but OH MY GOSH. If I had just had the surgery I think I would have been fine, but all the trauma measures afterwards have left me pretty beat up and I’m feeling pretty darn miserable right now. Surprisingly little to no pain, but one eye is swollen shut, my throat is swollen, I can’t open my mouth, they filled my nose, sinuses, ear canals with some kind of medical glue junk, so the pressure is INTENSE, and forget about breathing or hearing. I can’t talk because it pressurizes everything in my head and causes bleeding, so with the no breathing, hearing, talking, and barely seeing, I am feeling a bit trapped in my head. Not to mention that they have me on a pharmacy of antibiotics and steroids now so my stomach feels raw.

This is not what I was expecting but I am choosing to be thankful that I am ok. I’m going to enjoy the peace in the moment and work on getting my smile back. I have my whole life ahead of me and no one said healing would be easy.

Prayers would be appreciated for my comfort, healing, and the stress that I am feeling financially about a now extended recovery time.