Have you ever been in situation and in the middle of it find yourself thinking “I can’t believe this is happening?”

No? Just me?
All the time you guys, all the time.
A couple of weeks ago I was having friends over and one of my girlfriends gave me $20 and asked me to pick up some wine. I stopped at the store and grabbed five bottles of some on-sale cheap stuff. When I got up to the register the cashier asked “is this all for you?” meaning “did you need anything else?” but me and my smart ass mouth said “well I was planning to share with friends but still, that’s a little judgemental.”
He just stared at me.
“Um…because you asked if this was all for me” I told his confused looking face.
“Oh! Ma’am! (don’t call me ma’am, I’m not old) I was just asking if you needed anything else!” he said as his apology tumbled out of him.
“Oh no,” I said, “I know that, I was joking with you.”
Again with the confused look.
Never mind.
Speaking of wine, I have a fabulous single mom friend who lives out of state. We, as many single parents do, sometimes find ourselves craving a night out but are trapped at home due to sleeping tiny people.
So the other night, because we are self-proclaimed geniuses, we came up with a spin off of the drinking game “I have never ever” that we called “would you rather: dating edition.” All the questions centered around sex and dating and it looked like this: The two of us sitting in front of our laptops, on Skype, one of us would ask a question, and then we would both write the answer on a piece of paper. On the count of three we would hold the paper up in front of the screen and if our answers matched we would take a drink.
It was fun!! Here, I’ll even get you started if you want to play on your own;
“Would you rather date a guy who lives with his mother or his ex-girlfriend as a roommate?”
“Would you rather sleep with a guy who has body odor or bad breath?”
“Would you rather get caught having sex by your parents or your partners parents?”
“Would you rather your date have slept with everyone in his high school or you being his first since high school?”
It was fun. Don’t judge me.
Speaking of confused looks, a few weeks ago we spent the morning in the emergency room because of the Boy Child. I’ll give you a hint of what day it was, note our clothes; 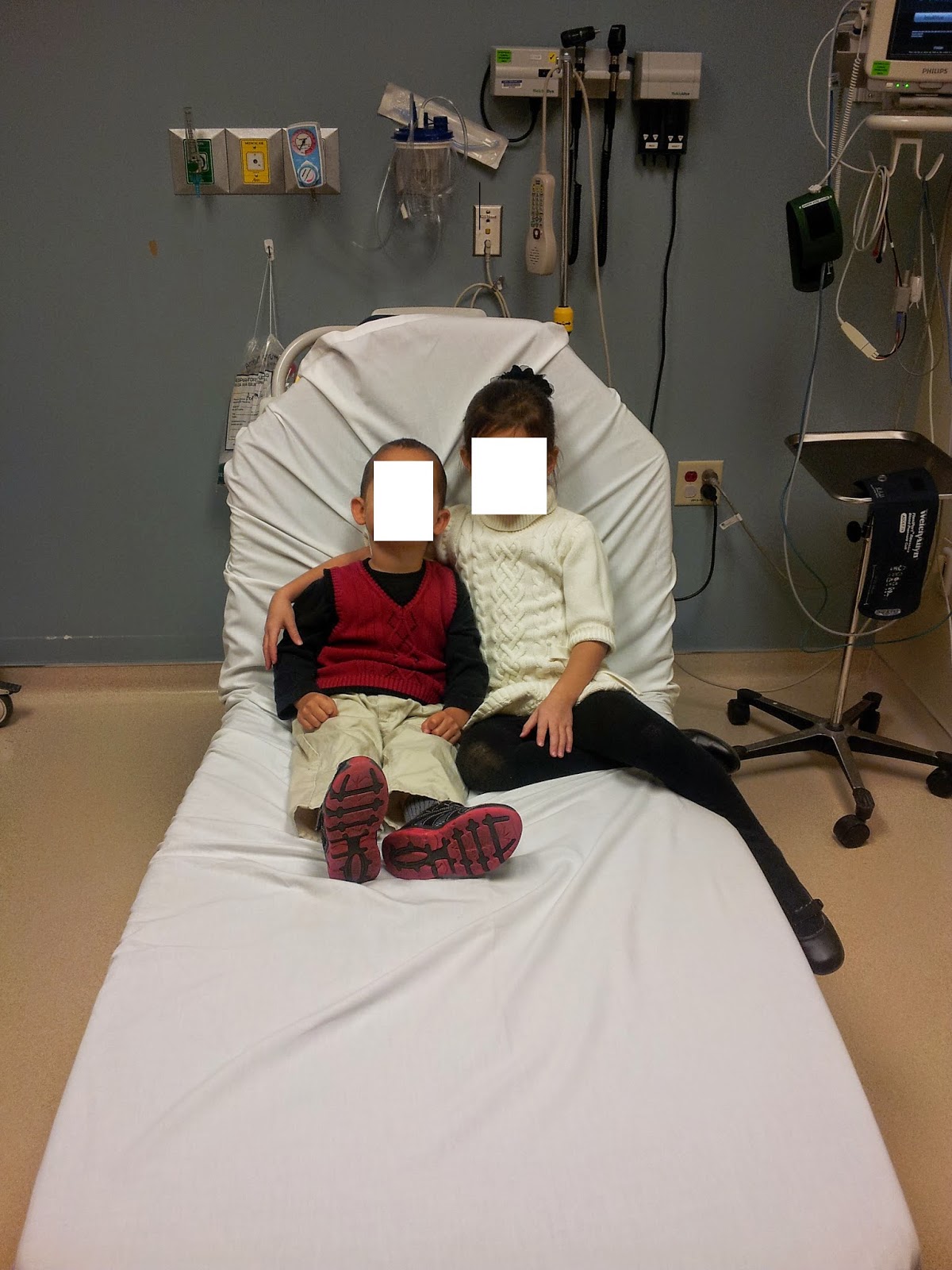 Still not sure?
Here is a traditional family photo that most familiees take on holidays.
“Oh Eden, that sucks that you were in the ER because the Boy Child had an ear infection on Thanksgiving, but why is that strange?”
Because check out the next picture. 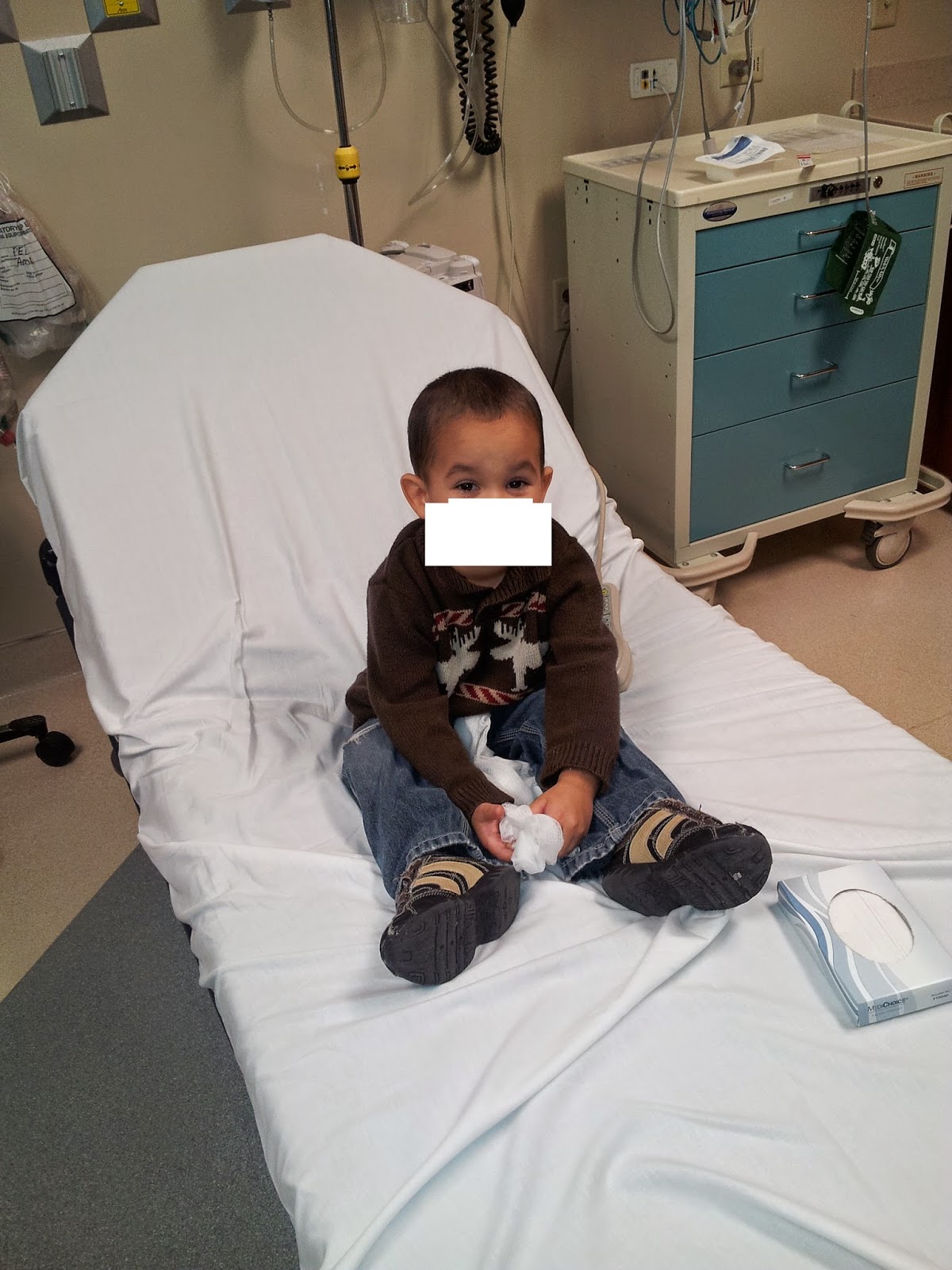 Note the outfit change?
Yep, very next day.
This is what it looks like when your child gets a bitch slap of a reality check/life lesson. Three times I told him not to slam the door. After a warning, a scolding, a talk about why we don’t slam doors, and a time out, he got up out of time out only to slam the door in protest and catch his finger in it, like I had warned him could happen.
You guys the kid did not say one word. He didn’t even make a sound. He just stood there as the blood dripped on the floor and his silent face screamed “do not move. Maybe she won’t notice. Cry later but not right now, DO NOT FAIL NOW ME FACE.”
I took a look at it and decided it needed stitches. After the Girl Child nearly passed out from the site of blood I dropped her off at a neighbors and off the the ER we went, again. There still wasn’t a word out of the Boy Child and so while being comforting and at the same time not overly comforting, I wanted to see how this played out on it’s own.
The nurse came in and cleaned off his finger and while it looked painful, there was still not a peep out of him. Eventually the doctor walked in, took a look at him, and exclaimed “you again! Weren’t you just here yesterday? Why are you back!”
The Boy Child then broke his silence by exclaiming “I got a big crack in me because I didn’t listen to my mom!”
Lesson learned.
The Boy Child really has been giving me a run for my money lately. The other night I was watching a movie, a horror movie to be exact, and I heard him coming down the stairs. He made his way over to me, bleary eyed and slightly tearful, and said “she won’t give me my snuggie back.”
“Who won’t give you your snuggie back?” I asked, somewhat confused as to who could have the little blankie he sleeps with.
“SHE won’t give it back” he says.
“Sissie?” I ask him, still confused as to why his sister might have it.
“No, not Sissie, HER, she won’t give it back.” he says while he is looking at his feet.
“Dude I have no idea what you are talking about, come on lets get you back in bed” I tell him, convinced that he must be dreaming.
“But she won’t give it back” he says as he starts to cry.
“Well,” I say, “when you figure out who she is, you tell me and I will get it back from her.”
“Da lady mommy. Da lady won’t give it back.”
KA-REEP-EE.
“Um, ok, well lets get you in bed and I’ll see if I can find it” I say to him, mostly sure he is dreaming and at the same time trying to shove every scary movie I have ever seen to the back of my brain.
I walk with him up the stairs and when we get to the top of the stairs he won’t go into his room.
“Come on dude, you need to go to bed” I say to him, somewhat exasperated and also unwilling to admit that he is freaking me out.
“But mommy she won’t give it back!” he says, now clearly annoyed with me but still looking half asleep.
“Who!?”
“Her” he says as he points directly behind me.
I turn around and come face to face with a woman standing in the doorway of his room…
who looks exactly like me.
Unfortunately my heart works faster than my brain because in that millisecond of coming face to face with someone, I actually had a heart attack.
Fortunately my brain works faster than my arms though, because about one millisecond before I punched a hole through his closed glass bedroom door, I realized it was a reflection, of myself.
By the time I was able to breathe again he had already made his way back to bed and was sleeping.
The snuggie though, was laying on the floor where he pointed, and I may or may not have left an extra light on that night.
No comment.
Speaking of near failures, several weeks ago the Girl Child ate a rather large dinner and then later asked for something else. I offered her a yogurt and she told me she didn’t like that specific kind of yogurt. I offered her some veggie chips and she told me I was only giving her things she didn’t want (she wanted candy). When I told her that those were her two choices and she could take them or leave them, she proceeded to yell that “I was starving her to death” and then told me that I didn’t care about her.

I had absolutely had it, that was the fifth or sixth time that week I had heard that out of her and it was going to be the last.

I got out my laptop, googled “starving children images,” choked back tears, and then I showed my daughter what starving to death really looks like. We talked about how those kids mommies were very sad that they couldn’t feed them anything and how it hurts my feelings when she tells me that I don’t care about her because I work very hard to make sure that she has food. We talk about how those kids would be happy to have anything to eat at all and they wouldn’t complain about the flavor of yogurt that they have. We talked about why we shouldn’t be overly dramatic and then we had a hard conversation about how kids in this world do die because they have nothing to eat.

Well, while I am teaching the Girl Child about the ways of the world I had COMPLETELY forgotten that the Boy Child (who was down and out with the stomach flu) hadn’t eaten all day (much to his dismay), and was now laying on a towel on the carpet watching TV (forgotten about him because he had not made a peep and that is SO not like him. But yes, I’ll admit, I momentarily overlooked the fact that I have two kids. Twas Unintentional. Was so quiet I assumed he was sleeping. Get over it).

I forgot about this until he looked at me and asked “mommy, am I going to die?”

I sort of stuttered out “oh no baby, didn’t you hear me tell Sissie that those kids mommies don’t have any food to give them?”

“But you stop giving me food today momma” he said, his eyes welling with tears.

As was like every conversation in this post, I found myself thinking “wait a minute….how did I get here?”

So basically I’m thinking maybe I should just stop talking.

What about you? What is the strangest conversation or situation you have found yourself in?

A Kiss From Me To You