I’ve been overwhelmed with emails from people wondering how court went today. First of all, thank you. Thank you so much for caring.

Today was a rough day.

I went to court and thankfully my Ex was not there. Nevertheless I spent a good majority of it acting like a bumbling idiot. I sat near a window and just tried my best to focus on what was going on outside (absolutely nothing. In 45 mins I didn’t even see a bird. I saw a woman cross the street at one point, but that was it) and keep my mind off of what was going on inside the courtroom.

At least by the window it didn’t feel like the room was closing in on me.

At one point Mr. Attorney Man took me into the hallway to go over some paperwork and as he was talking to me, I just felt like I was a million miles away. He was talking and all I was hearing was the mom from Charlie Brown saying “whomp whomp whompwhomp whomp.”

I was trying to listen to what he was saying, to process what he was telling me, but I felt like I had static running through my brain.

You guys I felt SO stupid. I just wanted to cry.

Mr. Attorney Man and I had a meeting a week or two ago and we talked for literally three hours. He asked me a few times if I wanted to take notes and I was like “nah, I’m cool,” and I was. Two weeks later and I can easily rattle off every sentence that was spoken verbatim.

This morning I didn’t even feel like I could speak English.

I just kept saying “I don’t understand what you are saying to me” and trying not to cry because I felt stupid and I knew I sounded stupid.

Eventually I heard the term “daycare” and was like “ah ha! I know why we are here! We are here to talk about daycare (among other things)!” I think at least that part of the conversation was intelligible on my behalf, but who knows.

We left the courthouse, Mr. Attorney Man asked me if I understood everything that went on, and while I think I caught onto the gist of it at the end, I’ll probably call him in a few days to confirm.

We had parked in the same parking garage and as we made our way there from the courthouse Mr. Attorney Man stopped to get his quintuple-espresso-peanut butter cup-birthday cake-hot fudge sundae-coffee or whatever the hell it is that he drinks (I swear at least some of those words were used and I won’t tell you which one’s, but at least one of them is probably not one that you would have guessed). I stopped in there with him because I had something he needed to sign for the nonprofit and it was freezing outside. While we were standing there I tried to warn him that his coffee was spilling down the side of his cup but he grabbed it anyways, got it all over his hand, and when I pointed out the similarities between him and my children, he then uttered the phrase “I don’t need your help.”

Ok buddy, your choice! I then proceeded to watch him walk all over the coffee shop looking for napkins and eventually he had to ask someone where they were. I however, was looking at the napkins the entire time, but remember, he didn’t need my help.

“So Eden, why aren’t you telling us how court went?”

Because I can’t. Because answering how court went is almost non-relevant to how the rest of the day went. It’s complicated and messy and wrapped into a big mess that is the culmination of this day and to be honest I just can’t talk about it right now. 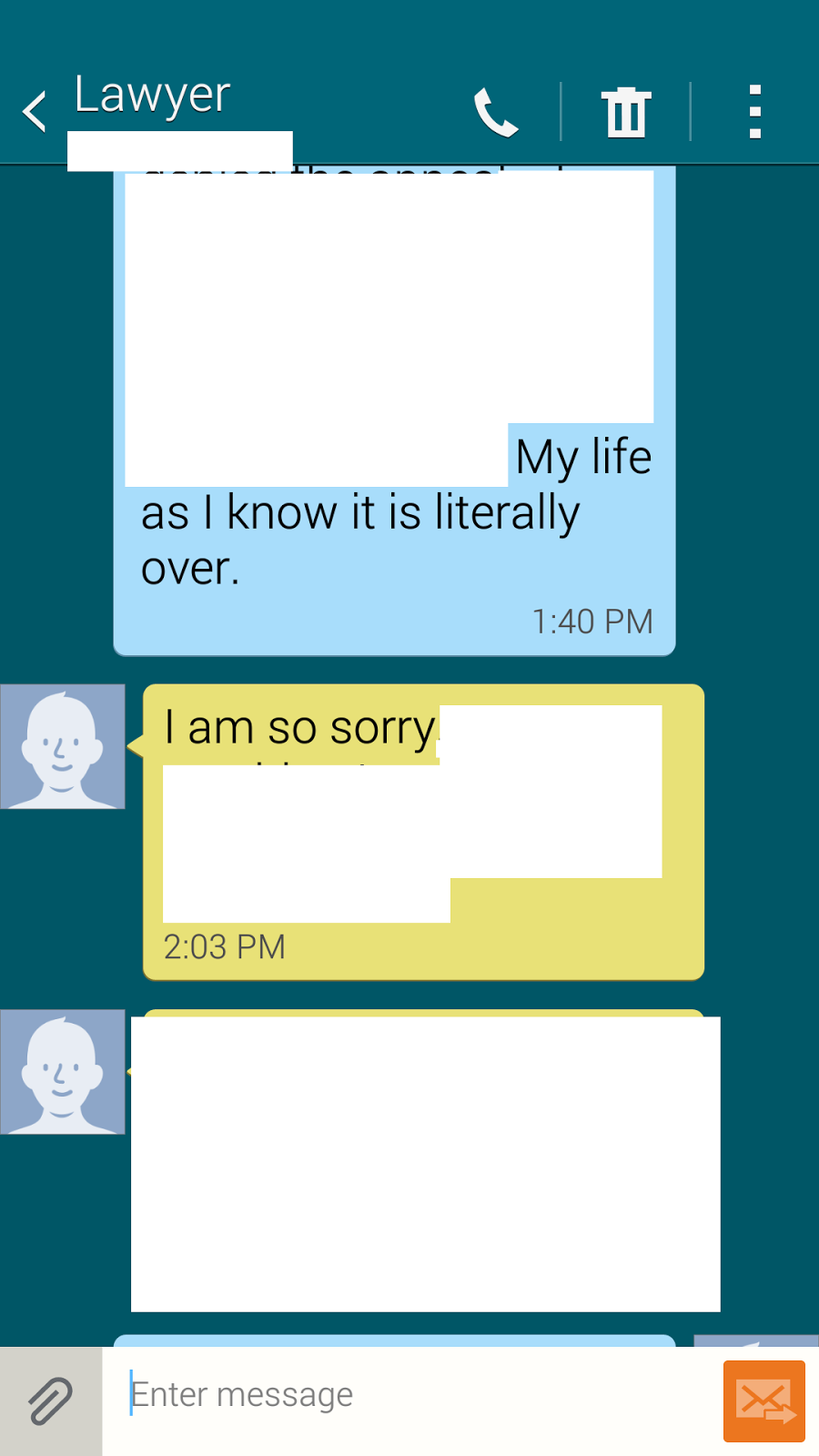 I just can’t talk about it because I’m afraid that if I start to let it out, I will completely fall apart and I can’t afford to do that right now.

Tonight my daughter is at the Daddy-Daughter dance at her school. Remember my best friend and her hubby, the couple that I talked about in the post “Make It Count?” Her husband, also a friend of mine, took The Girl Child.

I had called her several weeks ago, told her about the dance, and asked her if her hubby might possibly want to be the stand-in daddy. I was really nervous to ask, I mean how uncomfortable for him if he doesn’t want to take her? How do you not feel obligated to say yes out of guilt? That’s what scared me the most, making them uncomfortable.

He said “yes,” and while I was excited, I was still really nervous that I was putting him out. It wasn’t until my friend called me a few days later and said that he also wanted to take her out to dinner, “anywhere she wants to go, pick someplace nice,” and asked if he should wear a suit that I started to feel better about the whole situation. Last night sealed the deal when I talked to my friend and she said he had been asking his co-workers what to expect. He told her that he was excited because it was his first daddy-daughter dance (they have two adorable sons).

This whole time, these last few weeks, aside from feeling like I was putting him out, I wasn’t sure how I was going to feel when he showed up. The night before my Ex left he had taken The Girl Child to a Daddy-Daughter dance at the YMCA. It was the last thing they ever did together and because of that it’s a memory that is burned into my mind. He had not wanted to take her at all and it was the single cause of our last and final fight.

Knowing how and why I chose my Ex was exactly why I had always wanted The Girl Child to have a strong male role model. The problem was, how do you set an example with the exact thing you are trying to avoid?

You can’t, you don’t, and I couldn’t. I desperately wanted my Ex to be everything for my daughter that she would need in order to not end up with anyone like him, and that was completely unrealistic.

He took her to the dance that night and then he turned right around and walked right out of her life the very next morning. 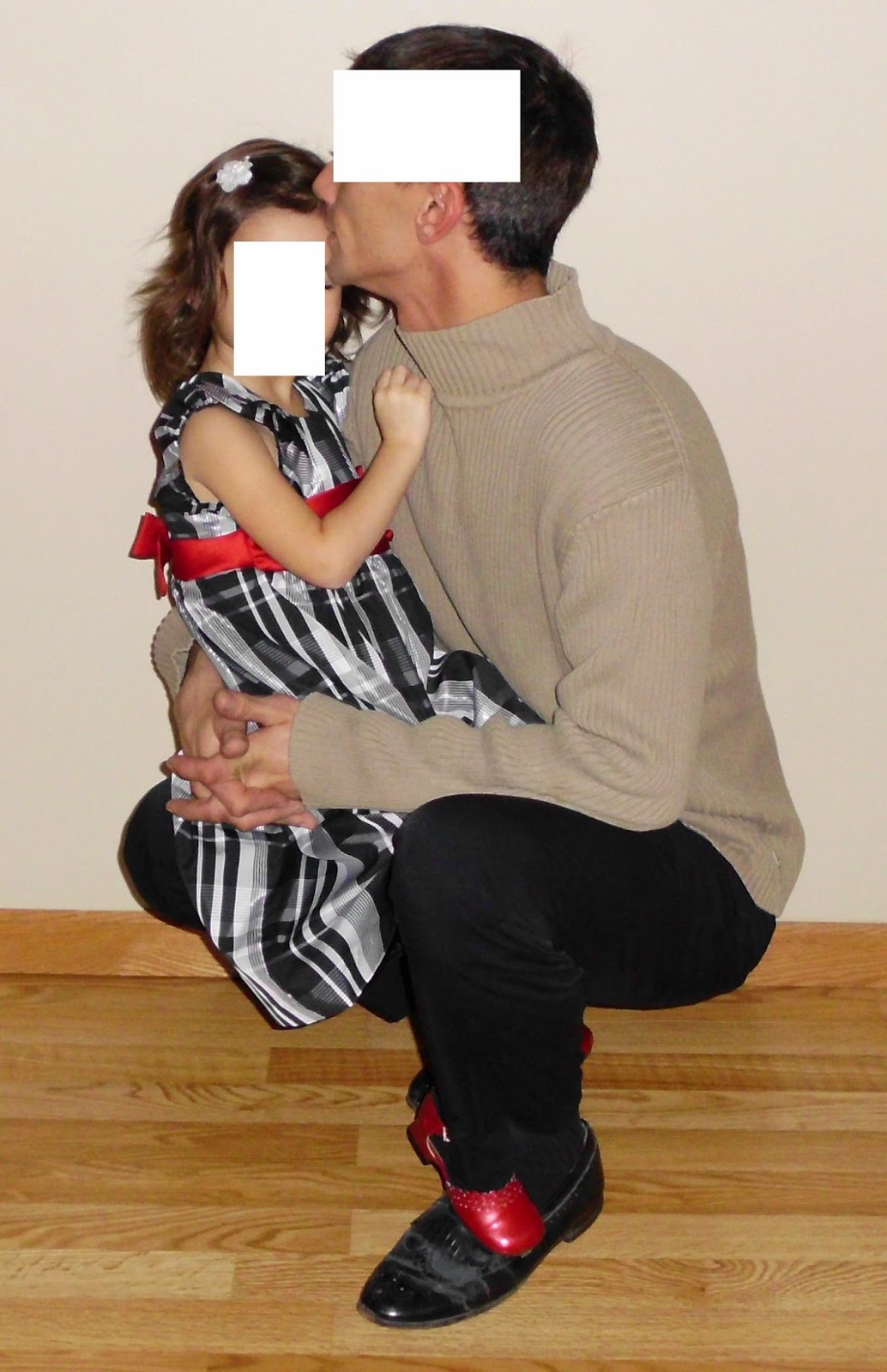 This photo was taken 15 hours before he walked out of our house and never saw his daughter again.

I wasn’t sure how I was going to feel about tonight.

The Girl Child however, she was nothing but thrilled. The kid even had a countdown going on and this morning she exclaimed with gusto “I waited 20 whole days and today is the day!!”

I picked her up from school, painted her nails, straightened her hair (which is how us crazy haired folks “do our hair”), got her all dolled up, and then her daddy-date arrived.

He was beaming you guys. I took one look at him and I could see how excited he was and all of my qualms just melted away. My heart was gushing and I was trying not to weird everyone out by crying.

He gave her a corsage, we snapped a few photos, and off they went. 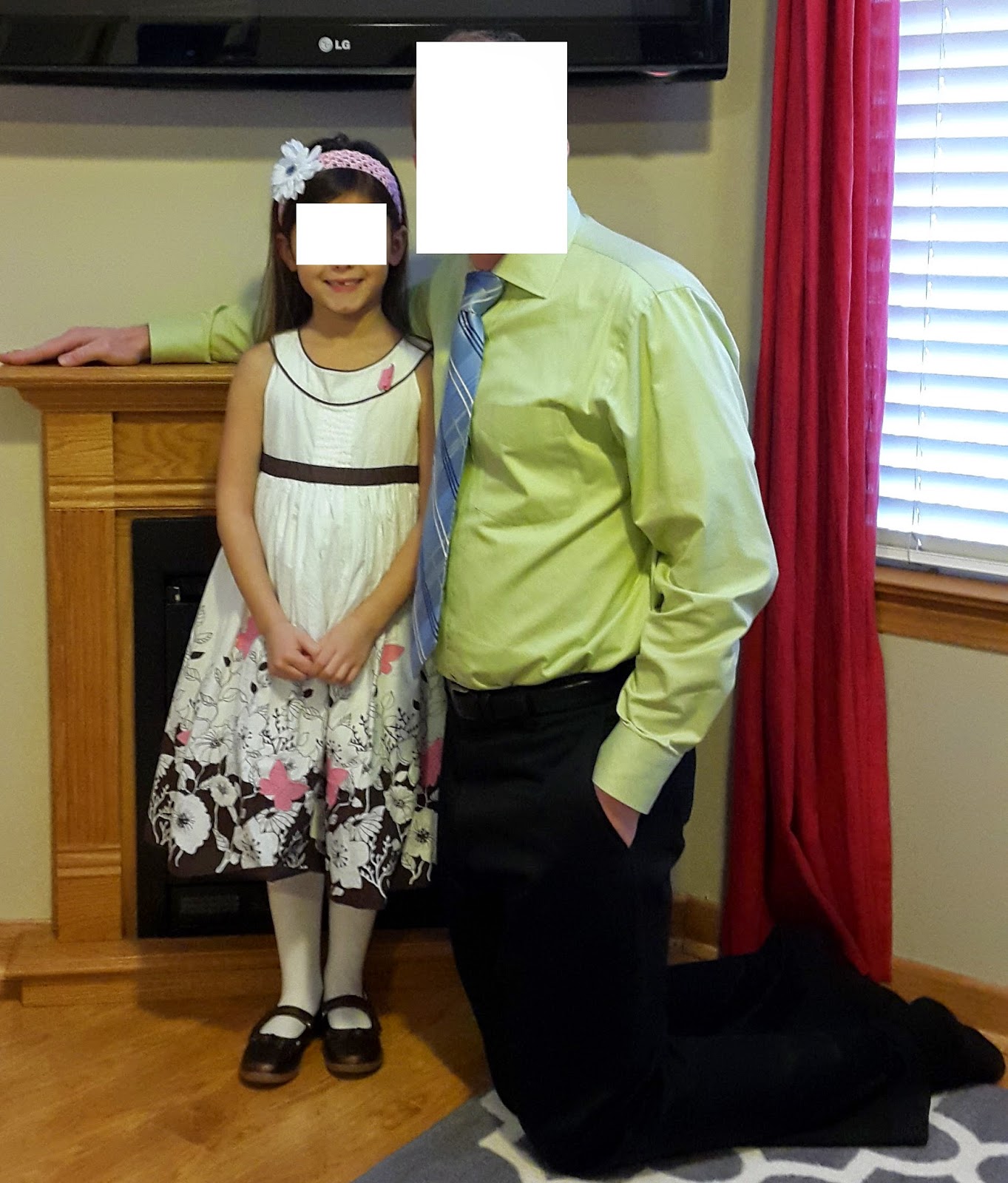 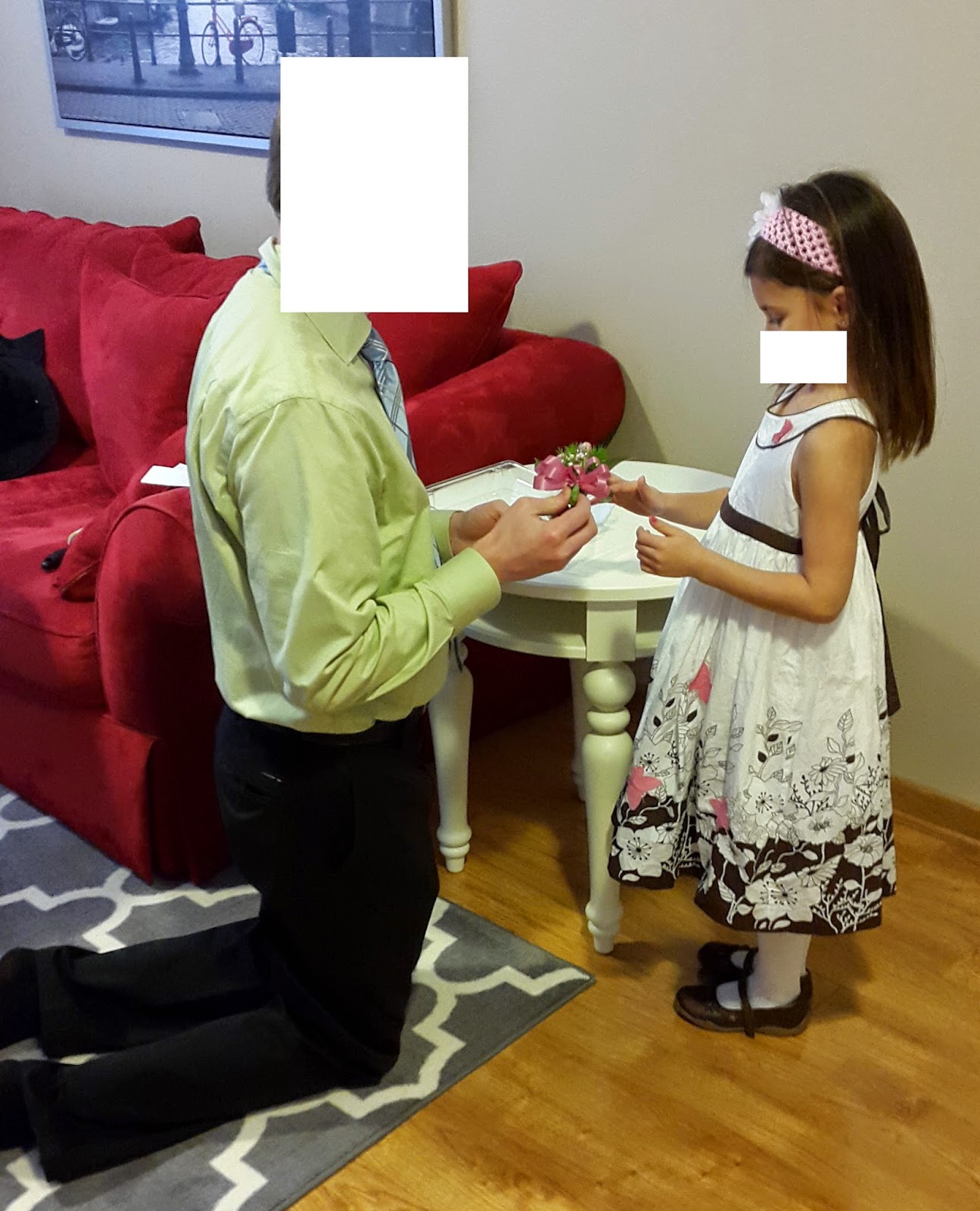 It’s funny, how the thing I wanted most for her was something that was never meant to be, yet tonight it came in a form that I never could have anticipated.

He isn’t her dad, she isn’t his daughter, but tonight, he is everything that she needs him to be; the example that she always should have had.

I spent some time playing “Hungry Hungry Hippo” with this little guy: 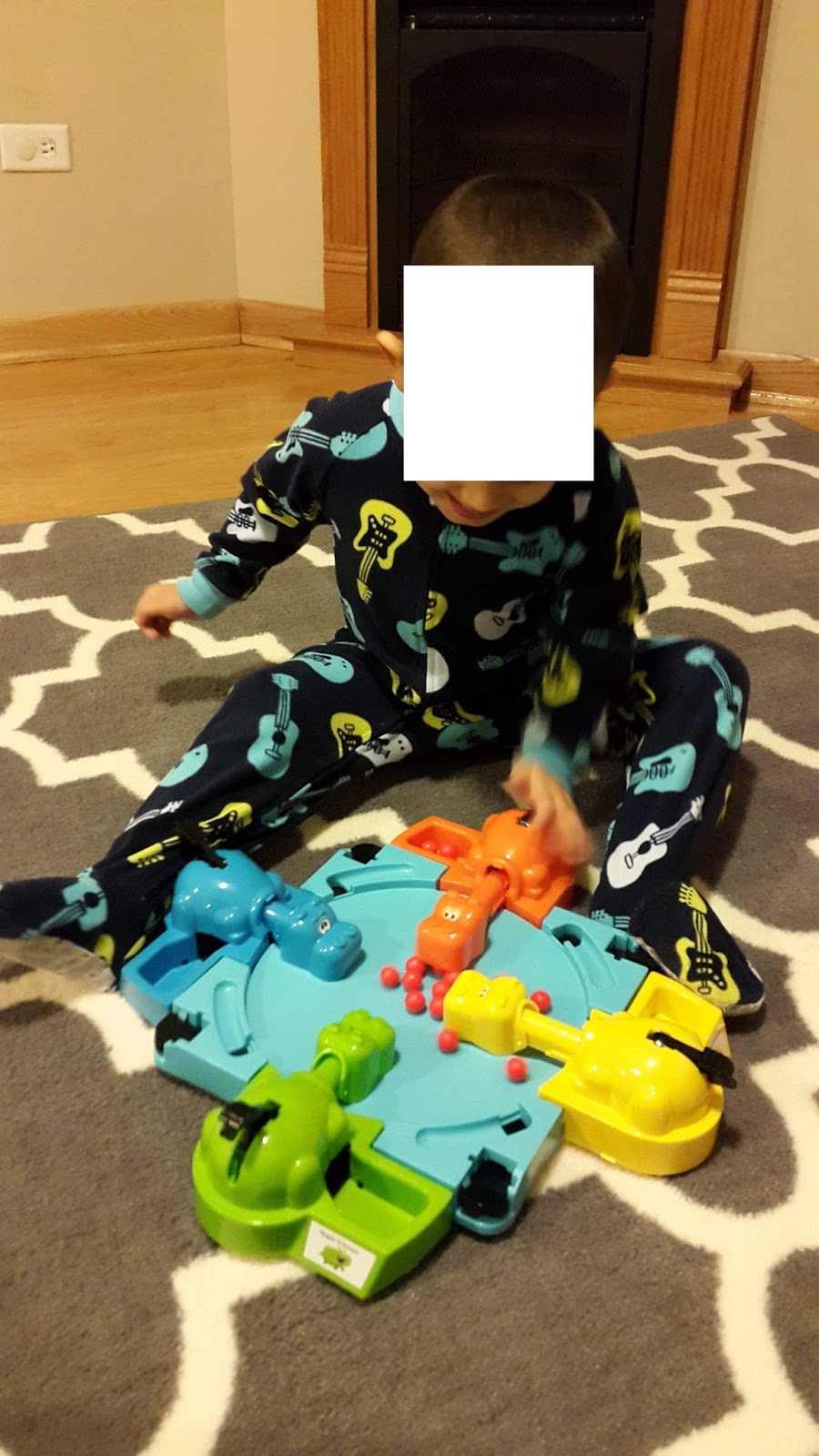 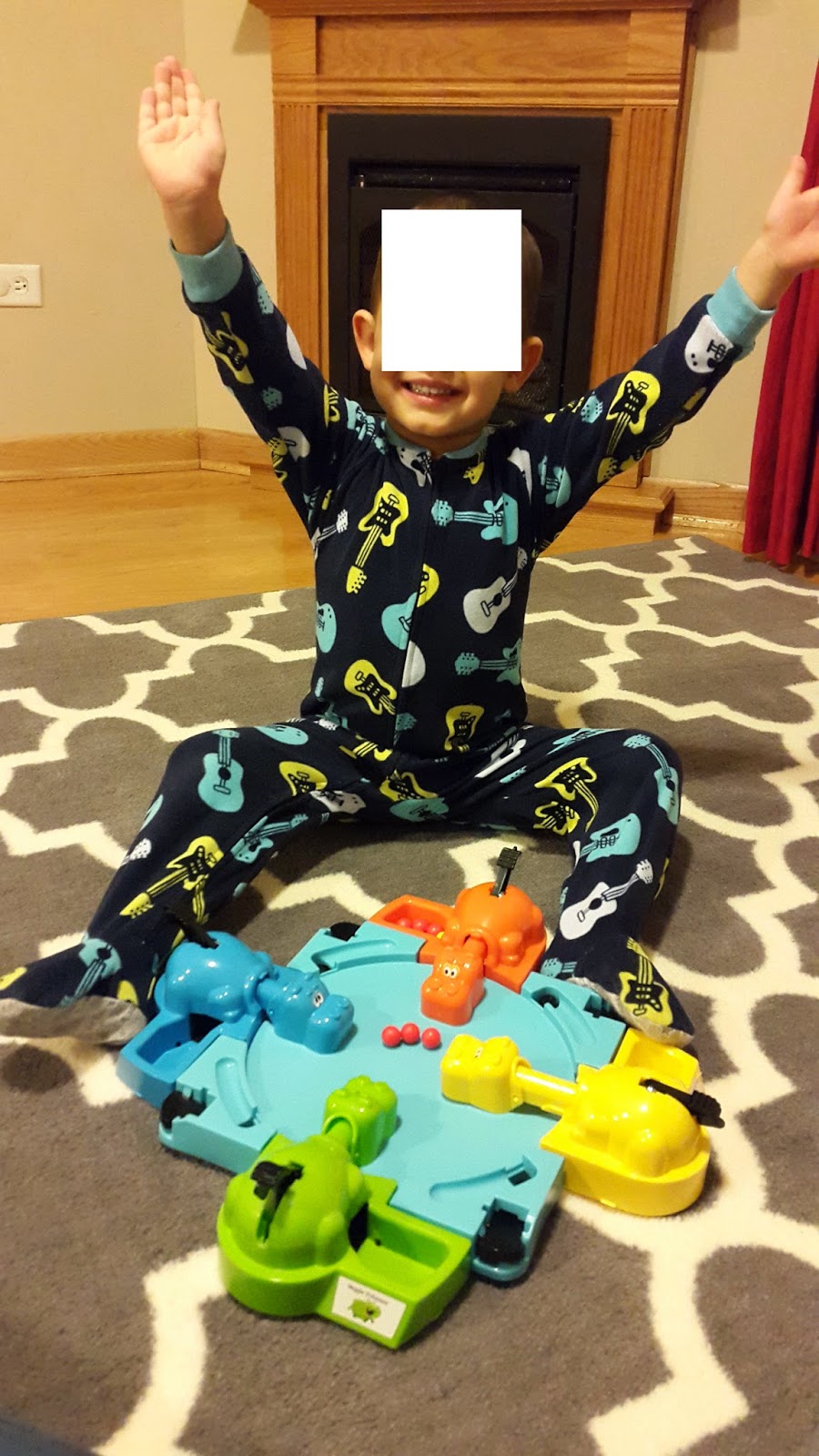 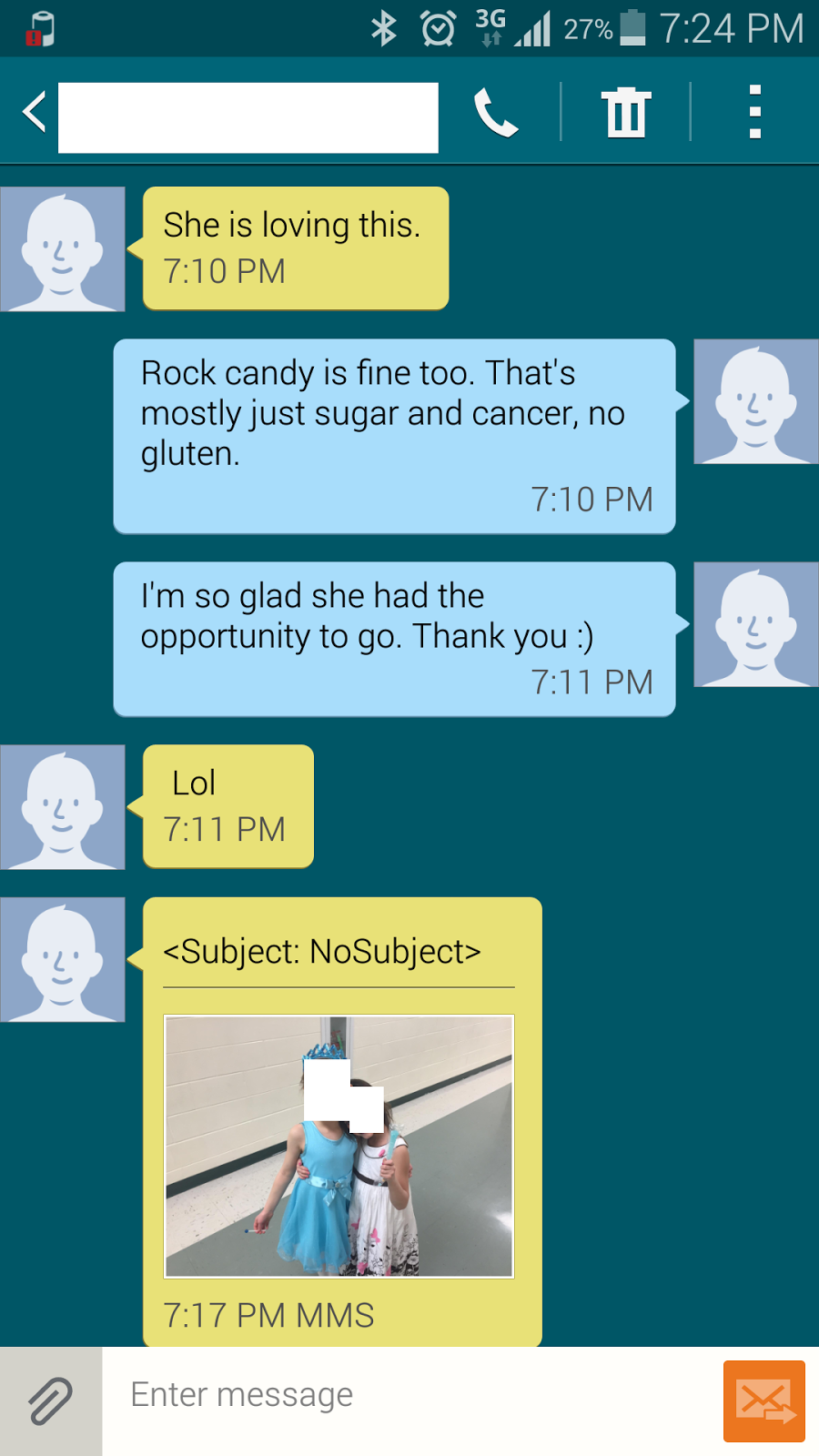 The stand-in daddy telling me The Girl Child was having fun, asking what snacks she could have, and sending me pictures of her and her friends.

So I’m sorry, I don’t want to talk about court, or my day, or the fact that my daughter doesn’t really have a dad. I just want to be happy right now in the moment because just like Cinderella I only have a few hours left, she only has a few hours left, and I want to enjoy them. 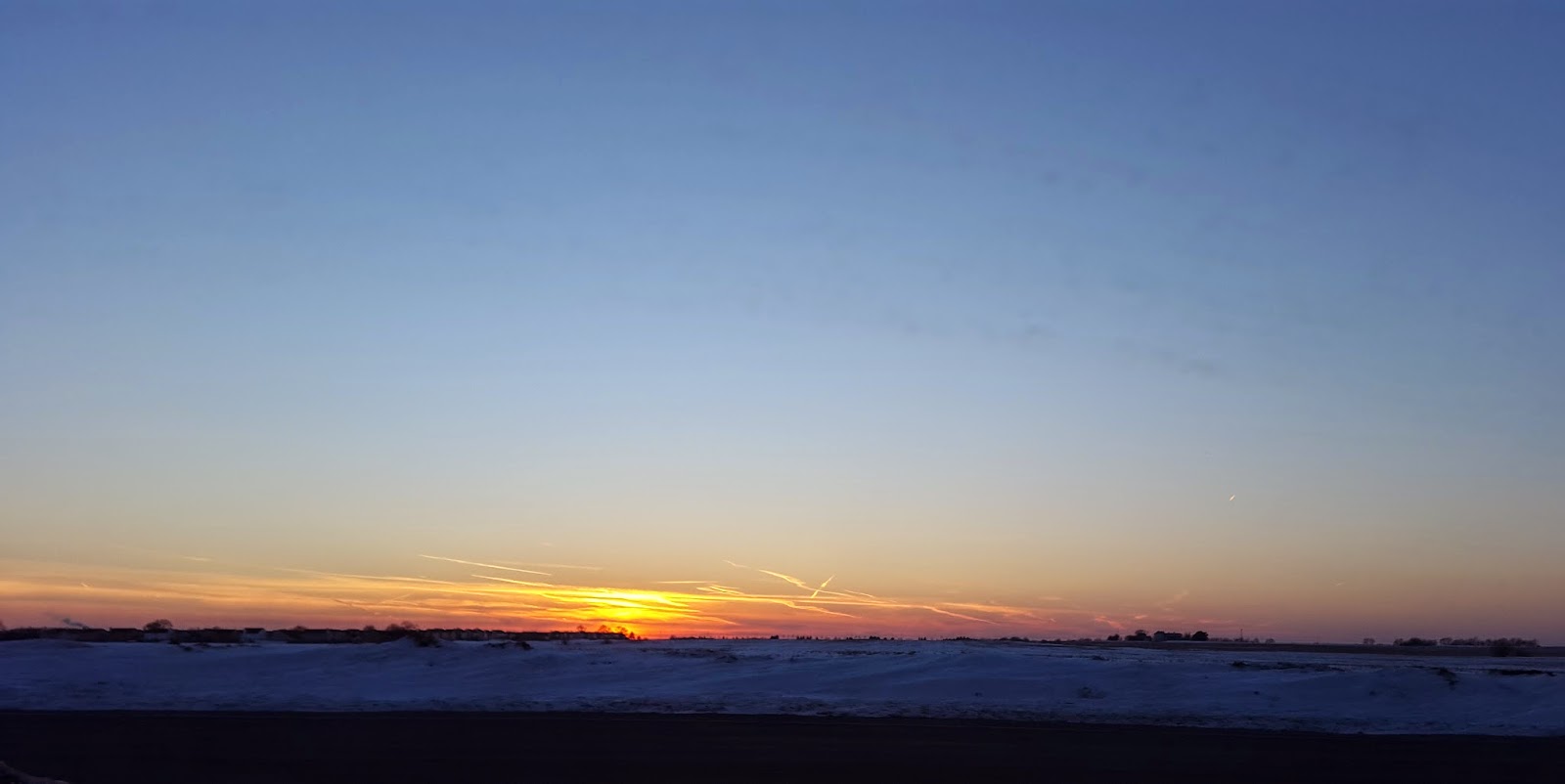 View from my front porch tonight
As I keep saying, everything that is going on is nothing that I wanted, but maybe what I wanted was never meant to be. Maybe instead I’ll get everything I need in a way that I never anticipated.
I’ll worry about it tomorrow.
Tags: Kids, Lawyer, Struggles
Newer Posts