Surgical Update And Other Total Randomness

Roughly three years ago I took The Boy Child to the hospital because he was having trouble breathing. He was quickly admitted and a course of treatment was started, but when he continued to decline instead of improve, it became apparent that the interventions that particular hospital was able to provide weren’t going to be enough, and so they decided to transfer him to a larger hospital. 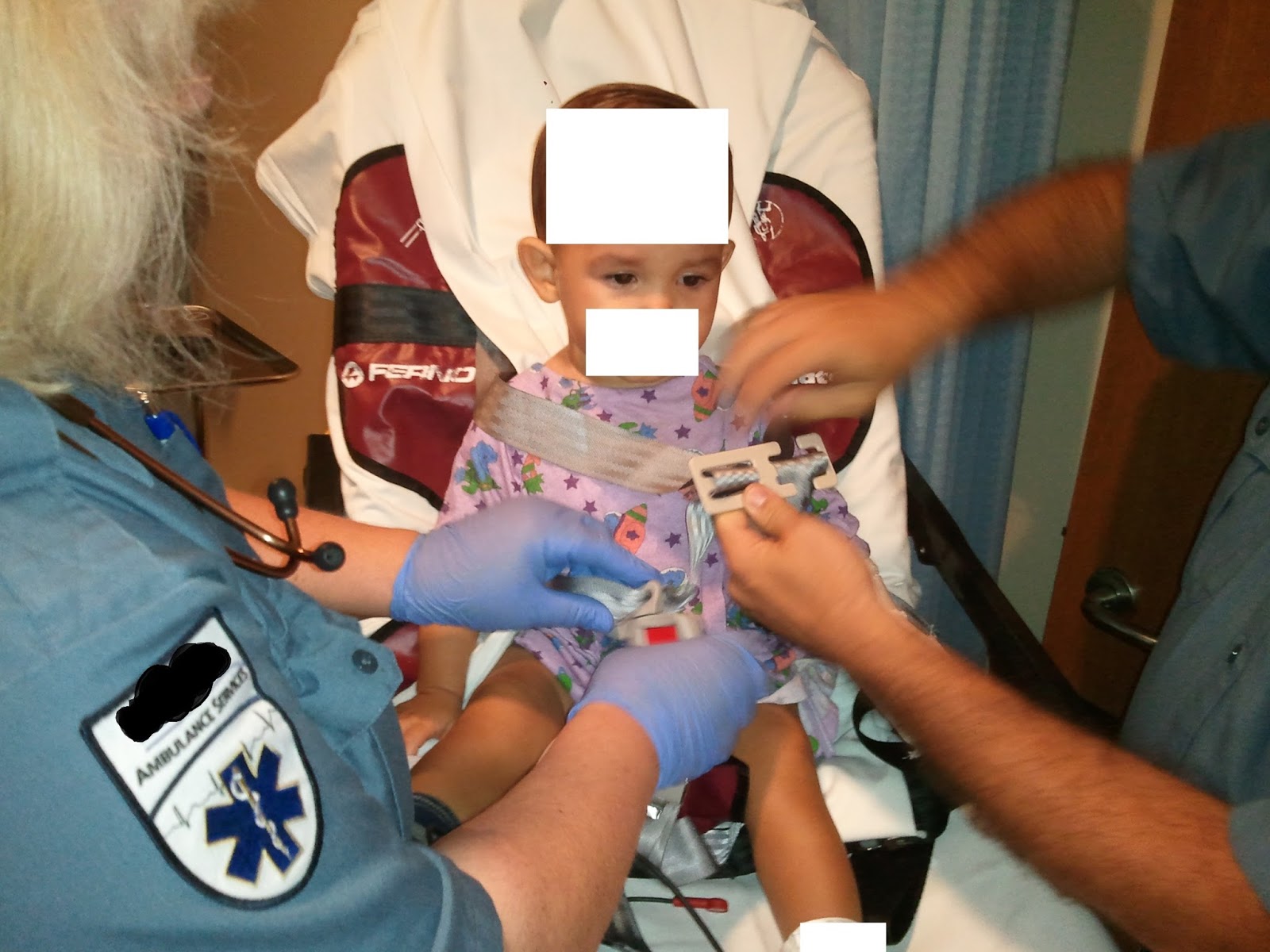 Getting strapped onto the ambulance gurney, purple hospital gown and all.

As I watched them load my son into the ambulance, I just kept thinking “I can’t believe this is happening… again.”

If you remember, my Girl Child was pretty sick as a baby and spent quite a bit of time in the intensive care unit. When The Boy Child was born, I had just gotten to a place with her where I felt optimistic about her future, and so as a precaution I had taken him in to see our geneticist. I wanted to rule out him having the same disorder that his sister and I have— or if he did have it, it was obviously important that I was aware of it.

When I took him to the appointment, he was so healthy that the geneticist decided not to run the outrageously expensive test, and by clinical diagnosis deemed him “not affected.”

Now suddenly here I was, for the second time in my life, watching as my critically ill child struggled for life. As I said before, when they loaded him into the ambulance I just kept thinking “I can’t believe this is happening again.” 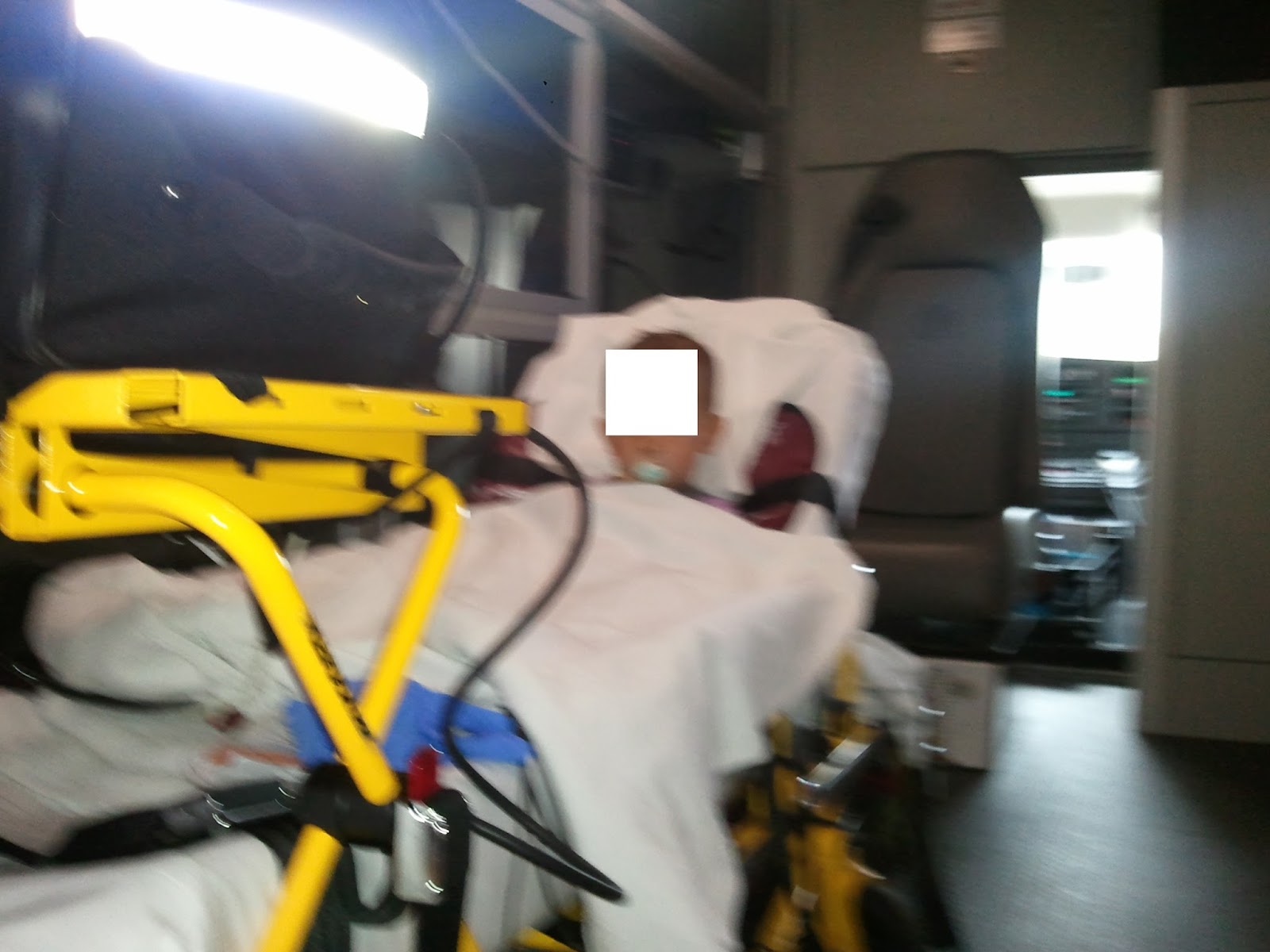 By the time we arrived at the larger hospital he had taken a turn for the worse.

As the paramedics ran down the hallway with The Boy Child on the gurney, I ran behind them, listening to them as they shouted out to the on call doctor what measures they had taken to try and stabilize him in the ambulance. 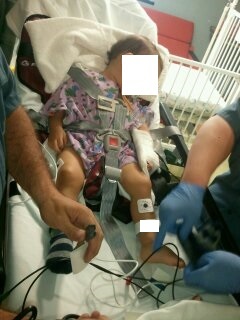 I spent the next week sleeping on a chair next to his bed in the ICU, and when he got out I prayed that it would be the last time I ever had to watch one of my children become so ill. 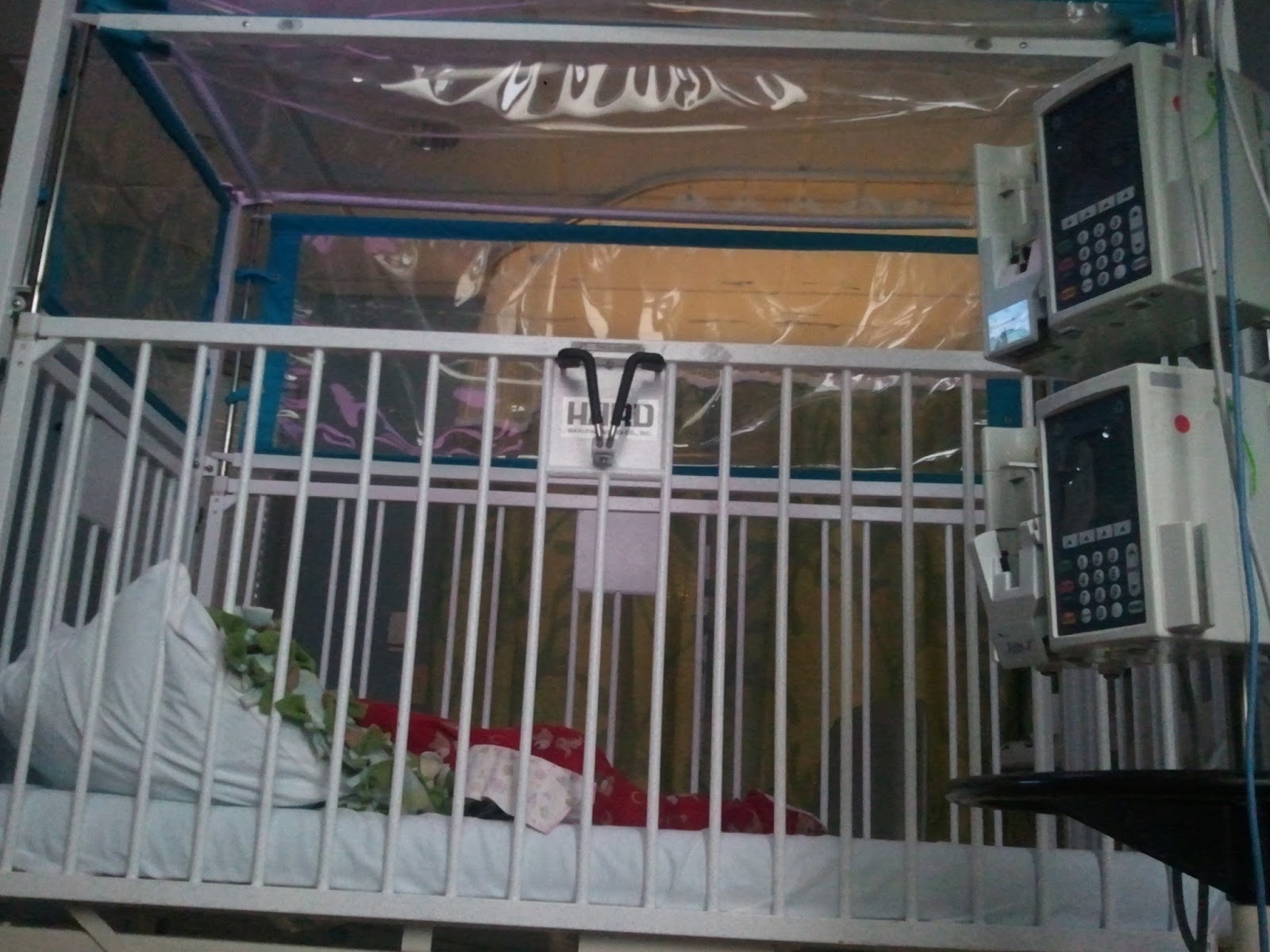 Last week I braced myself for impact as I checked The Boy Child into the hospital again.

Once you’ve been through a serious health crisis with your child, the naivety of assured medical comfort is gone. I know what good outcomes are, and unfortunately I know what bad ones are. I know that everything doesn’t always work out OK, and that’s terrifying.

When we got there the day of his surgery, the hospital had his room ready for him. I wish I had a picture of the look on his face when he walked in and saw all the toys the nurses had laid out on his bed. 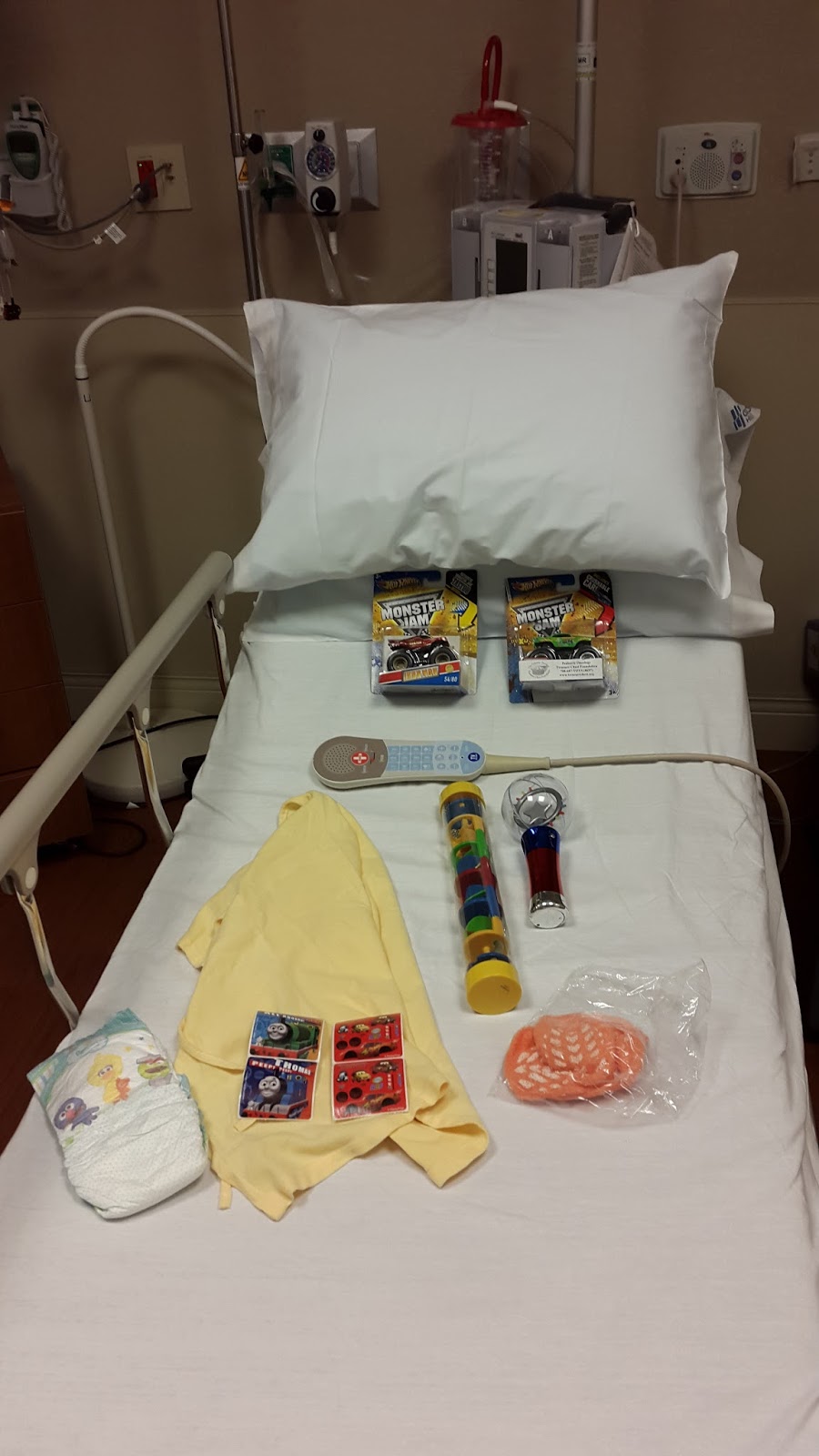 He wasted no time decorating his hospital gown, 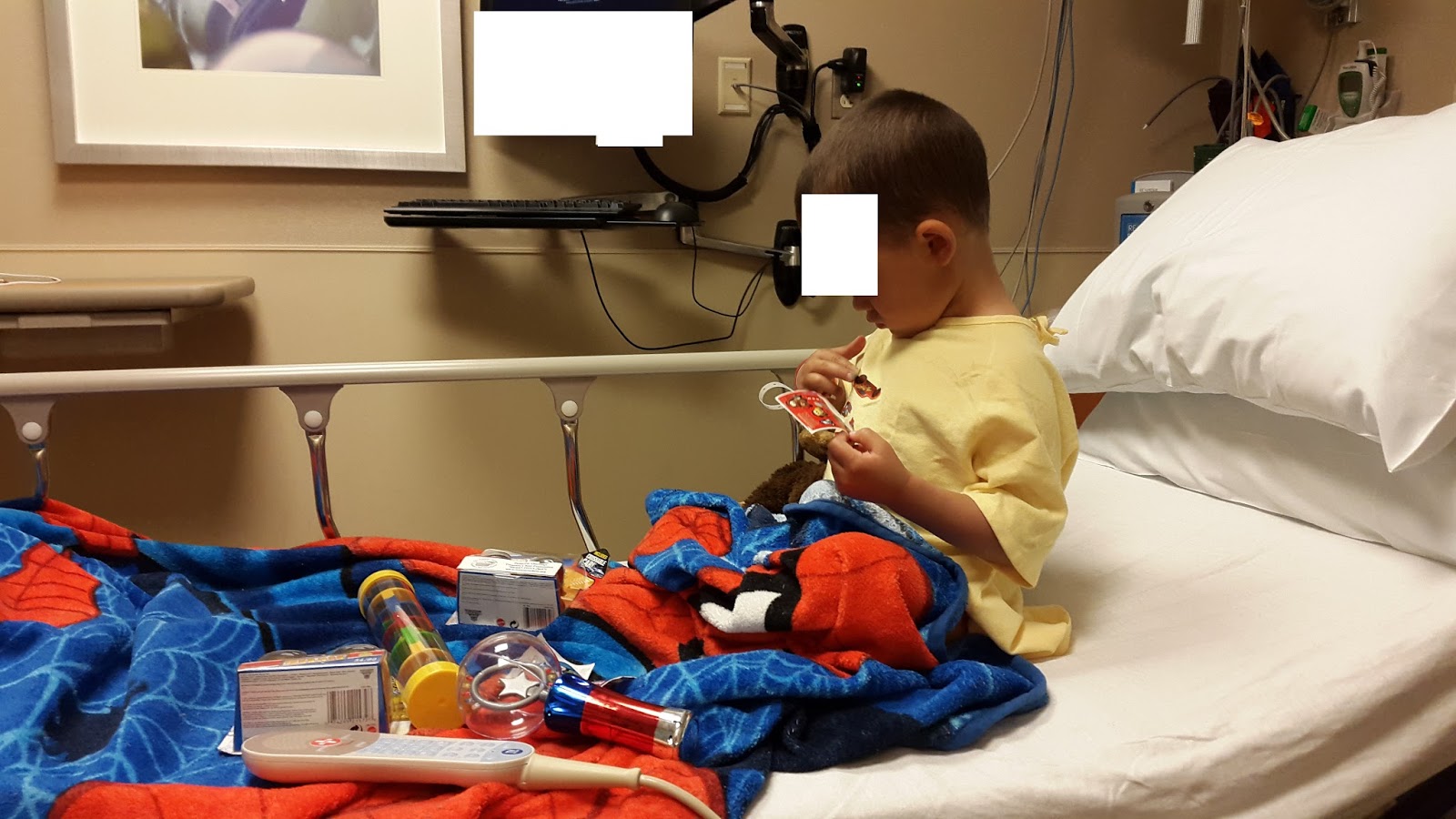 And I couldn’t help but smile at him because I thought that with the yellow gown and orange hospital non-skid socks, he looked like a little baby duck. 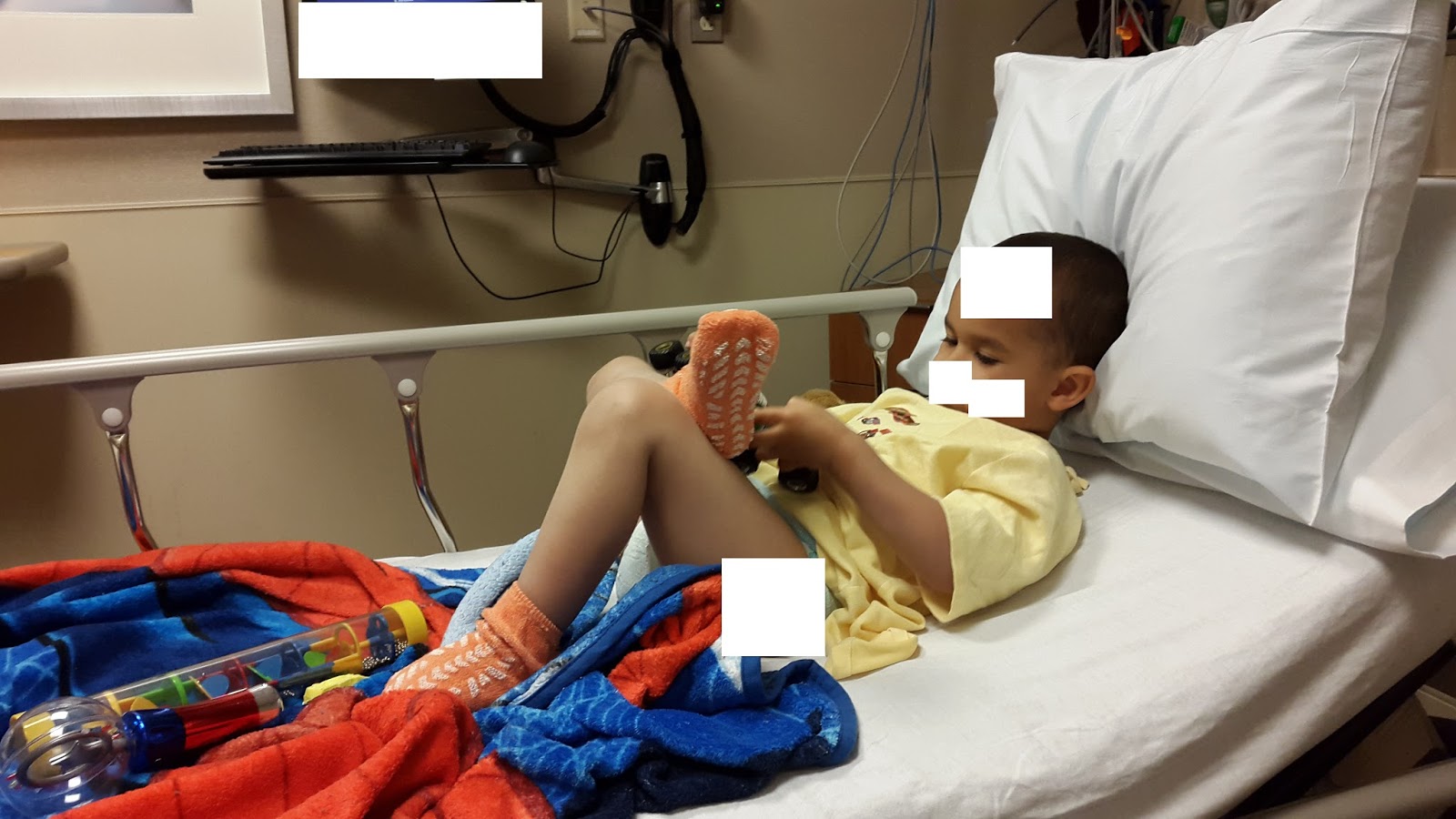 The nurses were amazing. Every single time they came in, they came in with a new toy, which made everything a little less scary for him. They blew bubbles with him, brought a dog by to visit, and just generally made our stay as comfortable as possible. After his surgery was done they gave him a big, brand new, dump truck.

When he was finally discharged, The Boy Child wasn’t feeling that great, but we were both happy to be leaving. 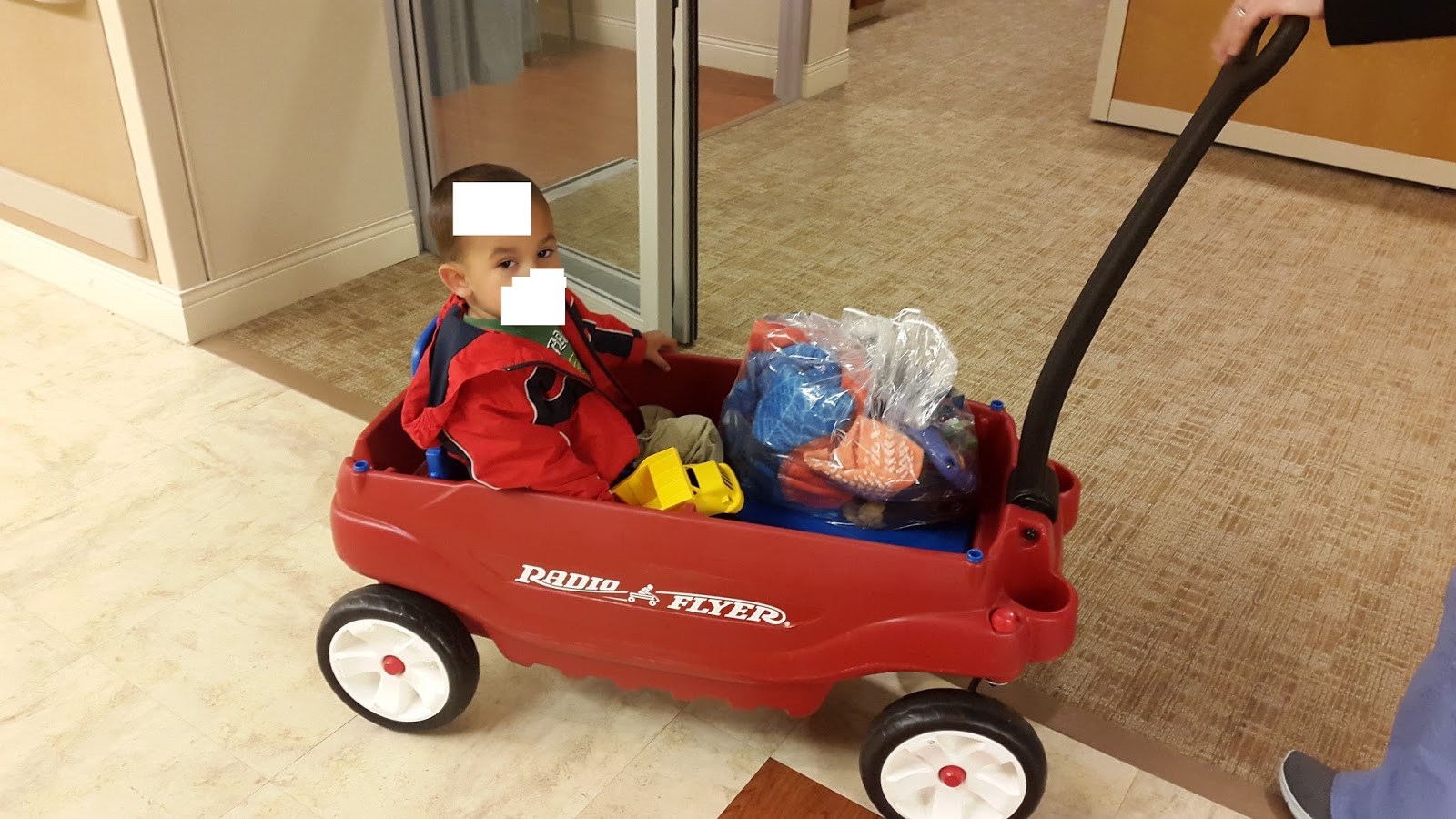 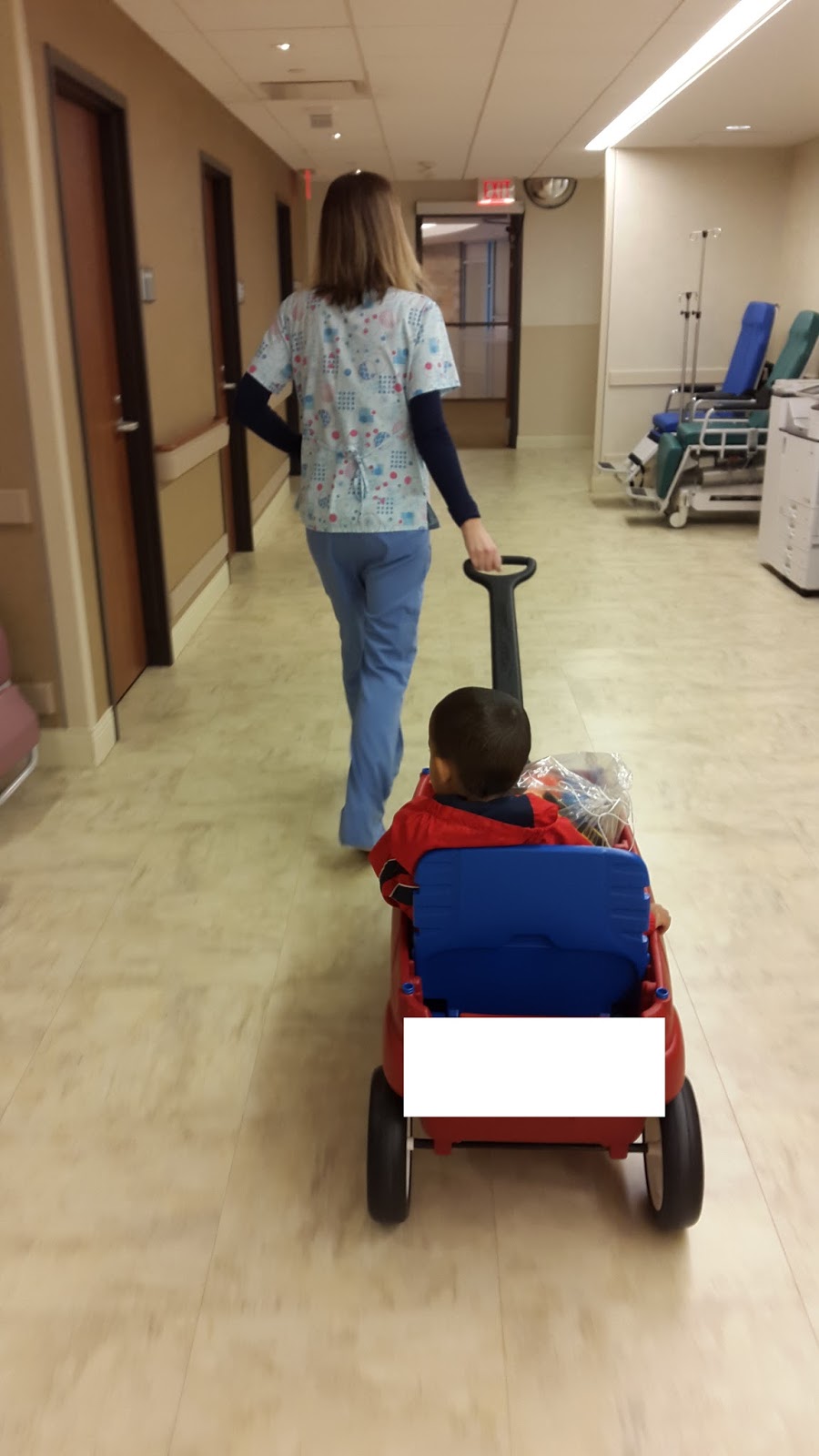 We spent the next few days taking it easy. 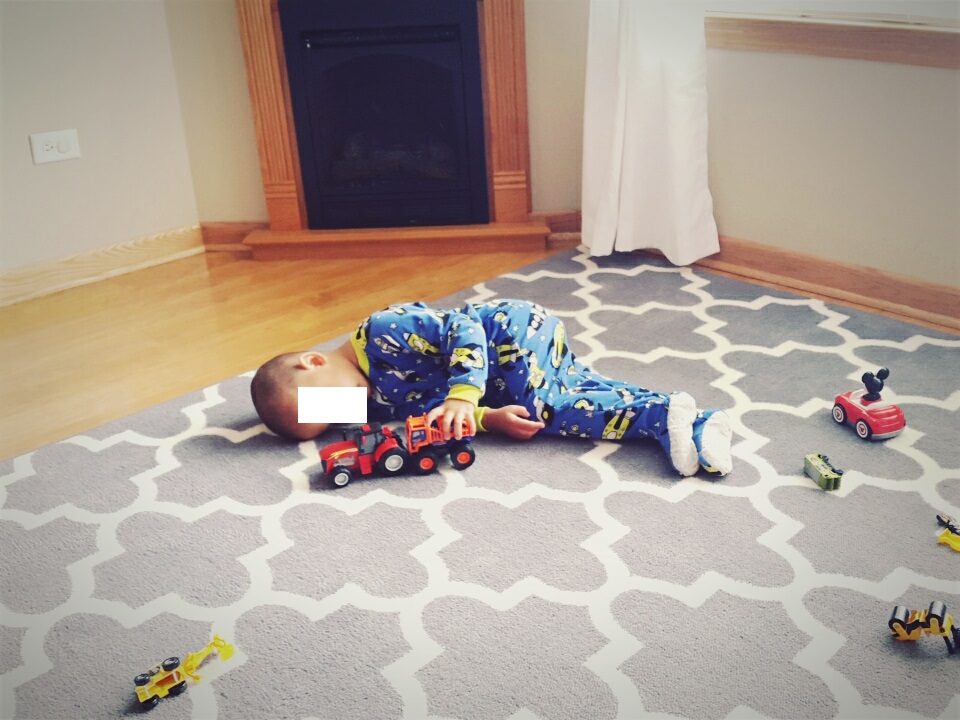 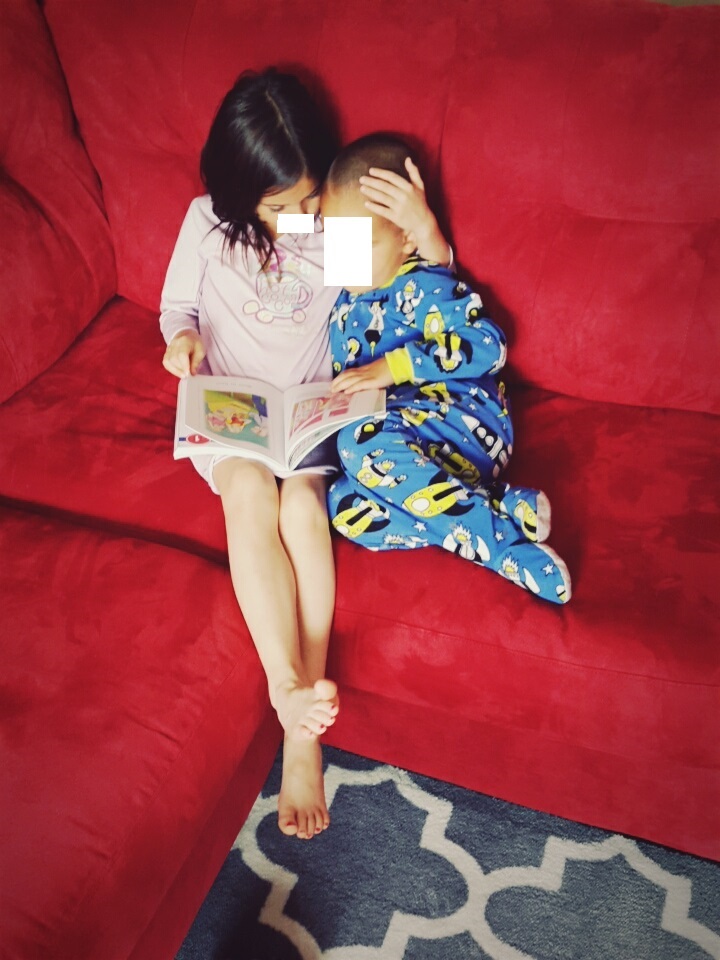 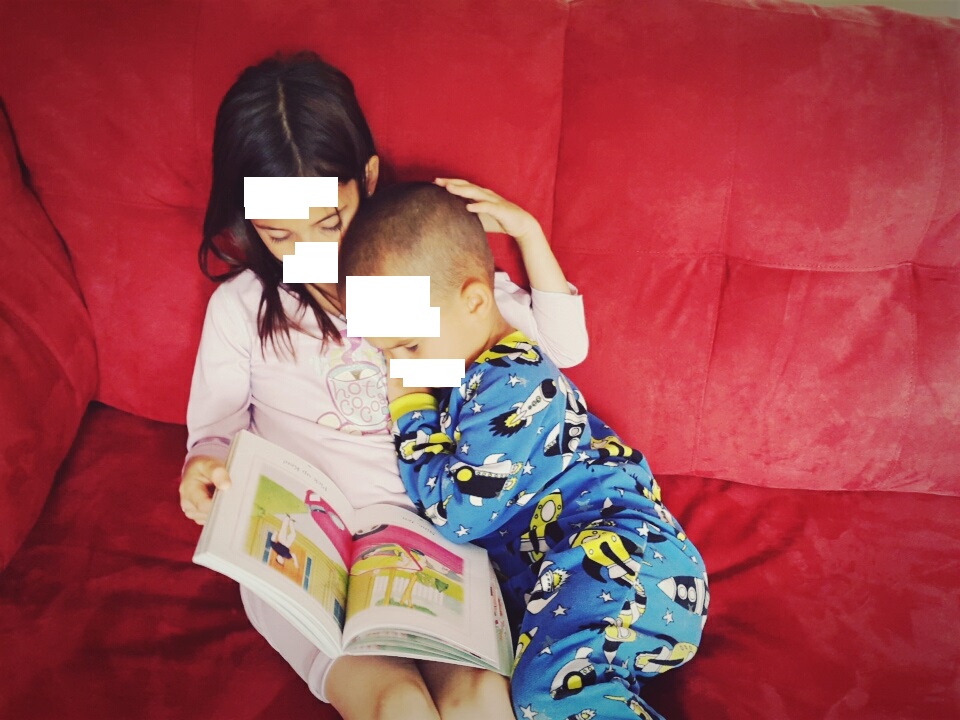 And thankfully he is doing much better now. 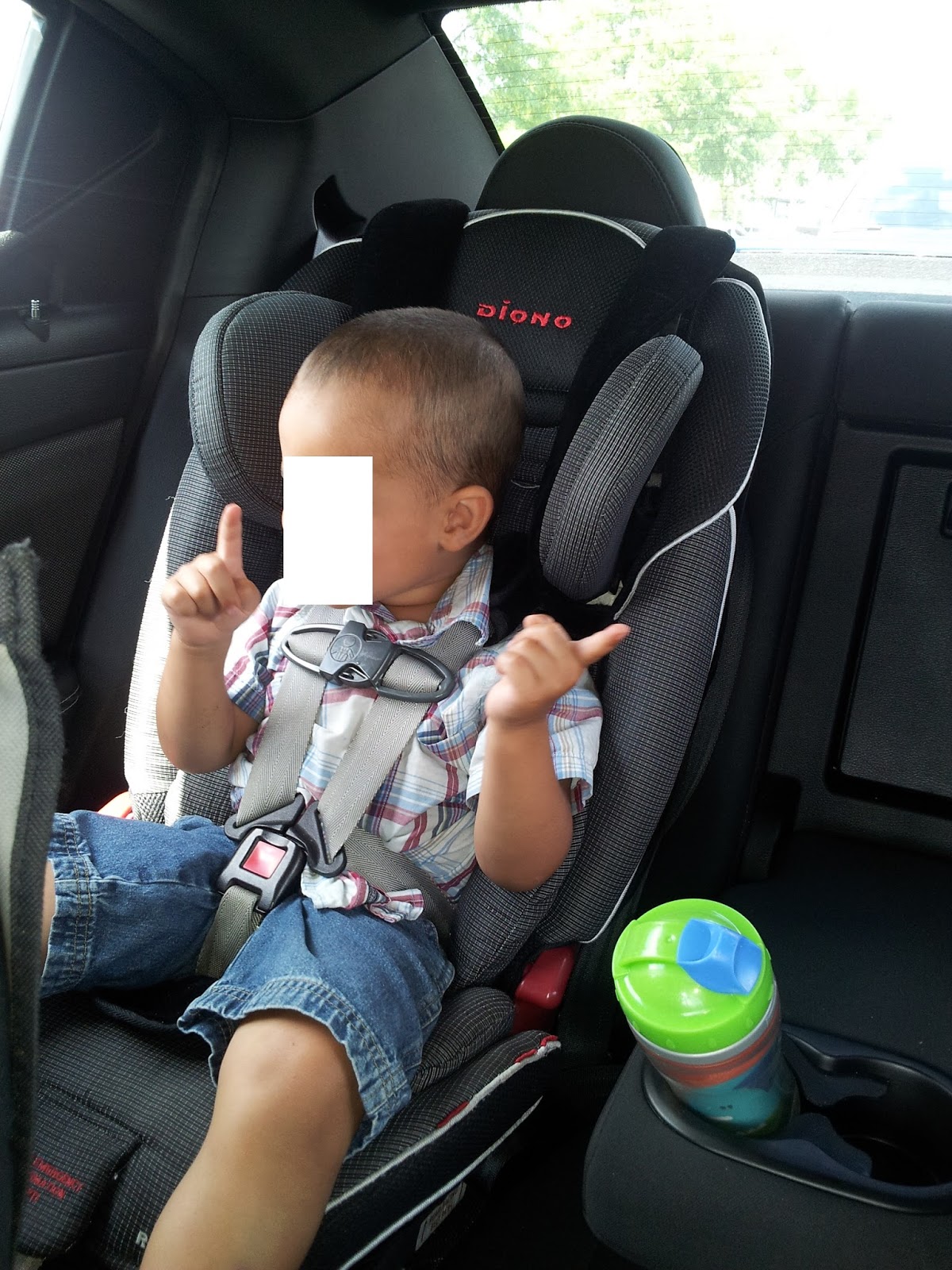 Dancing in the car

I’ve gotten quite a few emails from concerned readers asking what happened, what’s wrong with him, what surgery he had, etc, and although I am about as open a person as they come, this isn’t my story to share.

I will tell you that  I had no idea The Boy Child had been getting sneaky at daycare, and when his teacher wasn’t looking, he was eating the other kids food. Food that was filled with proteins that our bodies cannot break down. When you fill a body (digestive system, into–> blood, into–> organs–>) with a substance that it is not equipped to handle, it wreaks havoc on the system. It’s like pouring straight up black tar into your gas tank. The car can’t “metabolize it” and so the tar just spreads throughout the engine, seeps into things, goops everything up, damages the parts, and eventually the car breaks down.

My child ate things he had absolutely no way of metabolizing.

I’ve gotten so many snarky comments on this blog from people who think I need to lighten up in what I feed my kids, and maybe this experience might shed a little light on the situation for you.

I can’t feed my kids anything I want to, because it could kill them.

If he sticks to his diet, he will be fine. He can look forward to expecting a long and happy life with health risks that are no greater than the average population.

But if he continues to sneak food at daycare, he could land himself in the hospital again— or worse.

I’ve had people ask me before, “if you knew you would pass this down to your children, would you have had them?”

Are you asking if my life feels worthless because I can’t eat at McDonald’s?

Which I know, sounds like a silly rebuttal, but it’s the truth. The only difference between us and you is that we can’t eat certain things.

So hell yes I still would have had them, and in fact, if I met the right guy, I’d probably have one or two more (but that’s where I’m drawing the line. I’m not sure I could handle many more than that!).

That aside, this kid had better not pull this crap again because I think we can all agree that we have better things to be doing with our time. 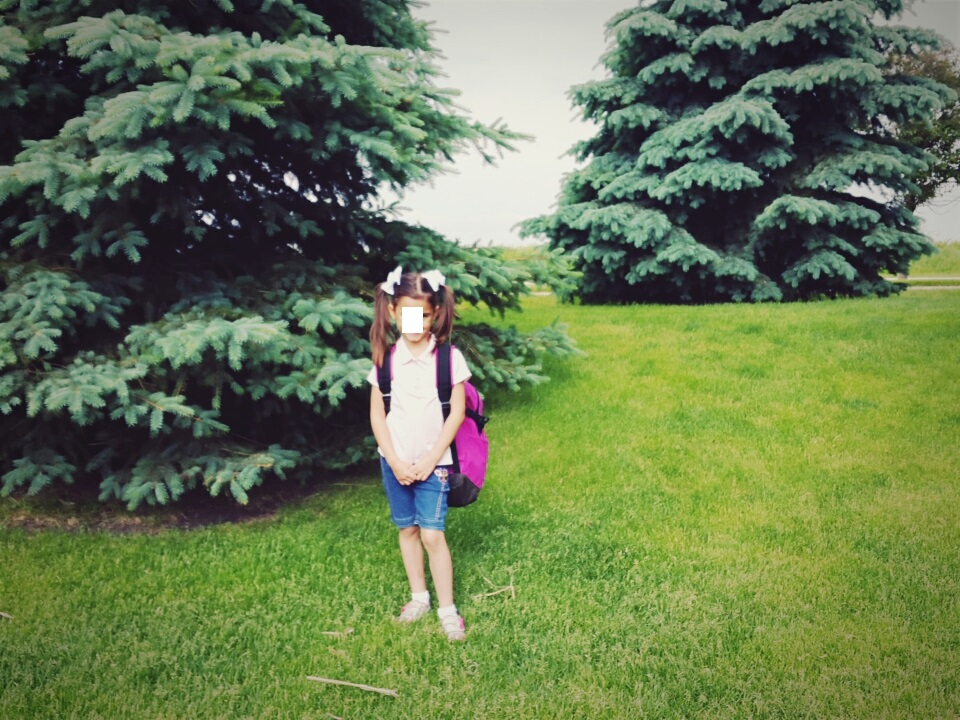 And can I just take a minute to talk about how different Elementary School is now than when I was younger?

It was pretty much party central at her school this week, and I’m not even exaggerating. They had “beach movie day” where they had to bring towels and pillows and they pretended to be at the beach while they watched movies. I’m talking popcorn, Popsicles, the works.

Hell they even had an outdoor carnival day, DURING SCHOOL HOURS, with a bounce house, a dunk tank, a rock climbing wall, face painting, and a ton of other stuff.

Screw college, I want to go back to Elementary School!

I am actually THRILLED that the school year is over.

I just spent the last 9 months waking up at 5am, driving The Boy Child to daycare, then taking The Girl Child to school at 9am. Then I would pick her up at 3:30pm, taking her straight to her dance classes, and then pick up The Boy Child from daycare at 6pm. After that I was off to my own dance, and when all of that was done, I would end up working until at least 11pm just to make up all the hours I lost during the day driving all over town.

But for the next three months I get to drop the kids off at daycare as early as 6:00am and pick them up as late as 6pm.

Of course I’m not actually going to leave them at daycare for 12hrs a day, I just like knowing that I can.

Does that sound horrible?

IT’S ALL ABOUT THE FLEXIBILITY PEOPLE.

But anyway, this is getting a bit rambly so if you want something to read that actually has some substance to it, I’ll leave you with these:

“I Stopped Listening To Doctors Because They Almost Killed My Child”

And as came up on Facebook this week, no, I don’t typically write the article titles for anything that I write outside of this blog. Not for all the companies I work for, but a majority of them. It’s common place for the editors to do that, it’s just the way the writing business is run. The editors are way better than I am at doing it anyway. No one would click on something I’d titled. It would say “HI PLEASE READ THIS BECA– USE I THINK IT’S FUN.”

That’s why the editors get the fancy titles and the desk (do they get a desk? I’m assuming there must be a desk involved). I’m working from my couch and they hire smarter people than I for the titling job.

Alright, I have a fun post planned for you guys on Tuesday. I’ll give you a hint: come hungry.

*** I know that it may seem crazy to you that I took pictures of The Boy Child when he was in the ambulance, but I learned early on with My Girl Child that looking at photos of herself and allowing her the opportunity to see them and objectively talk about what had happened to her, was the biggest step in her being able to process what had gone on. So although it may seem a bit jarring that I snapped pictures of him during a crisis, his well being was always at the center of my focus. When you are asked to stand aside and not be in the way, and the only thing you want to do is to help your child, you grasp at what you can.***

Why Would I Buy That?