Why Would I Buy That?

A few nights ago after I suffered a minor facial injury that I will take to the grave that I don’t want to talk about, The Platonic Husband and I made plans to watch the comedy “The Sex Tape.”

I’m the ugly peach color. For some reason it wouldn’t let me crop the pics so they are haphazardly pasted together. Sorry! 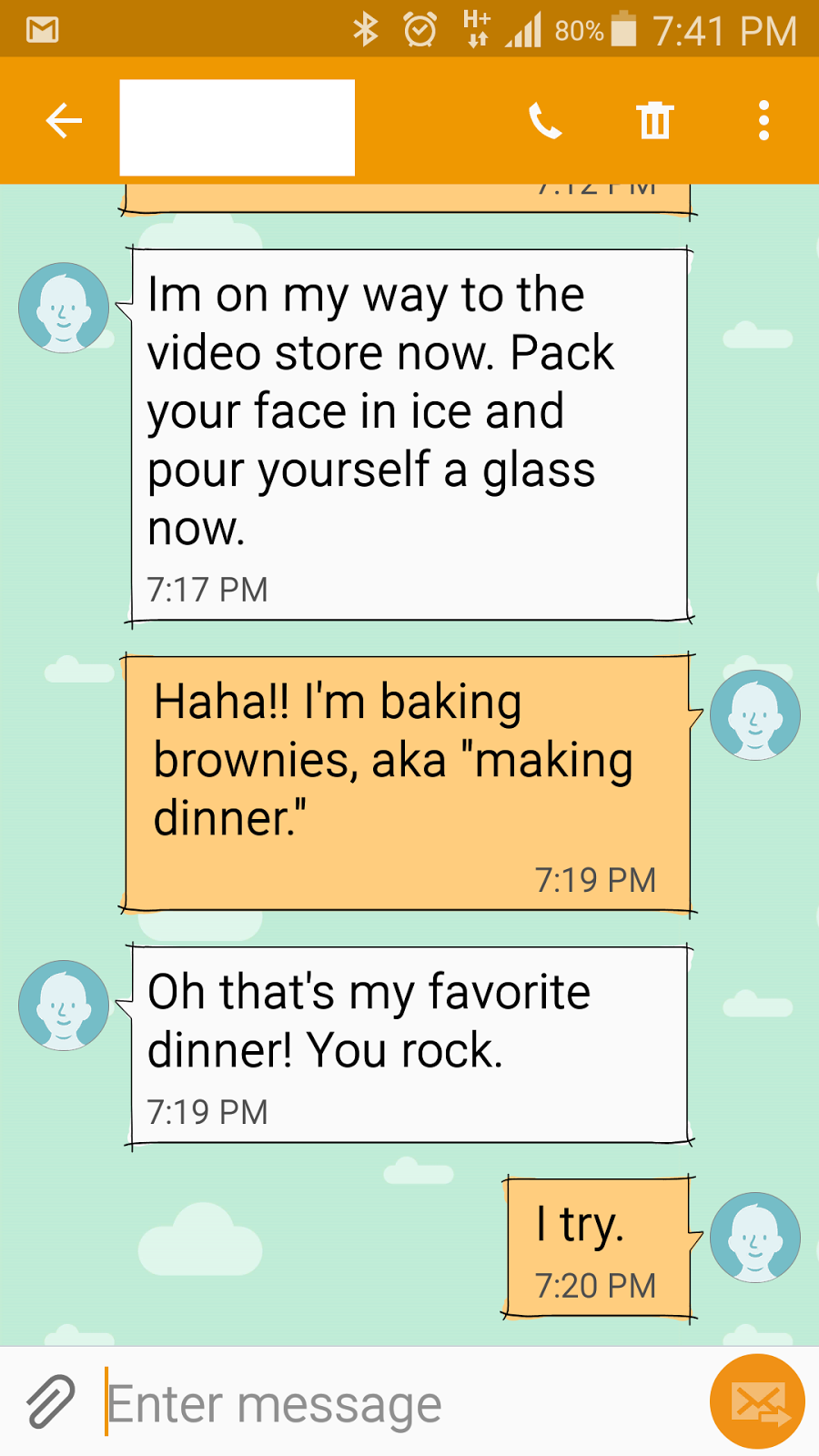 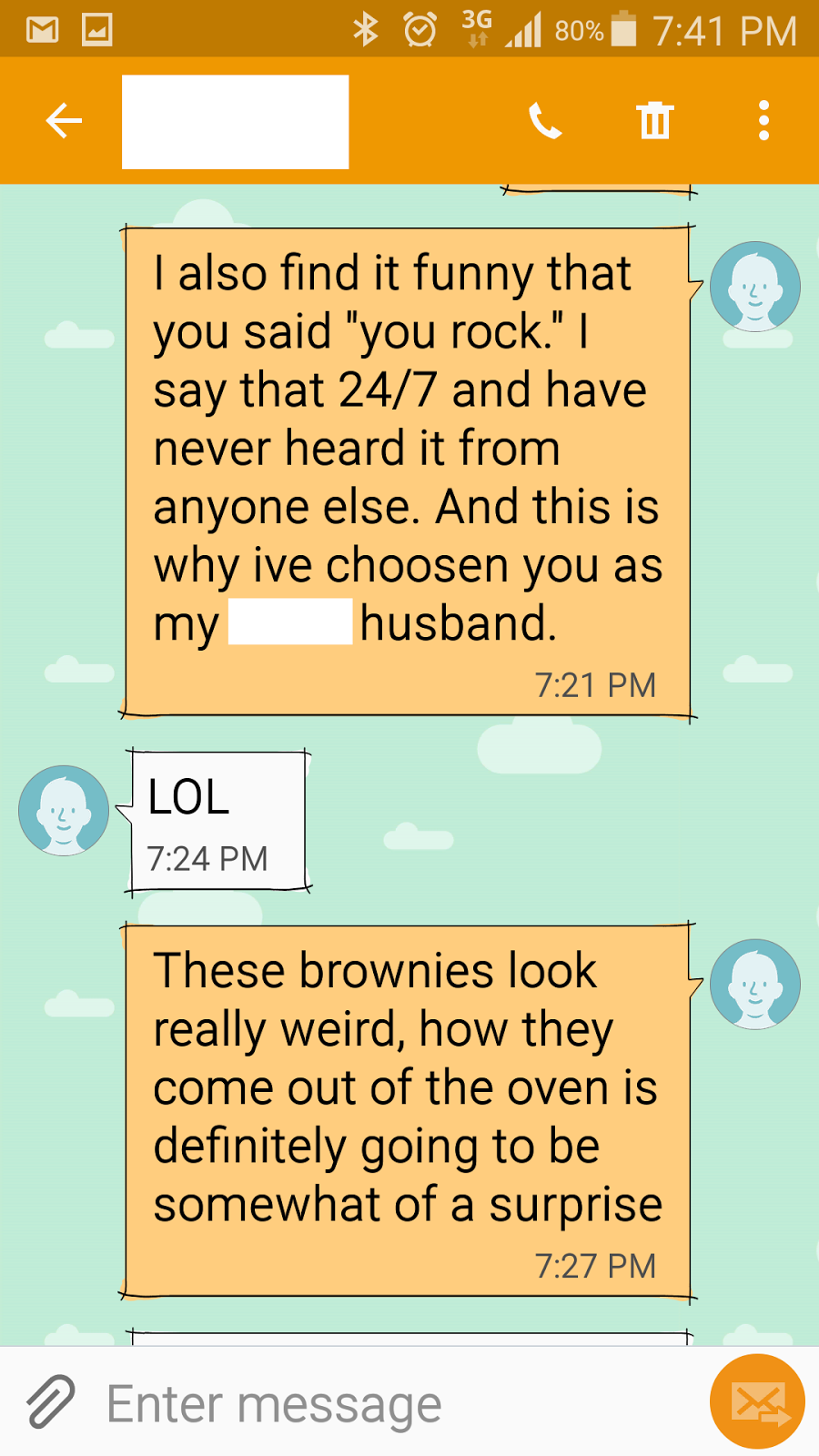 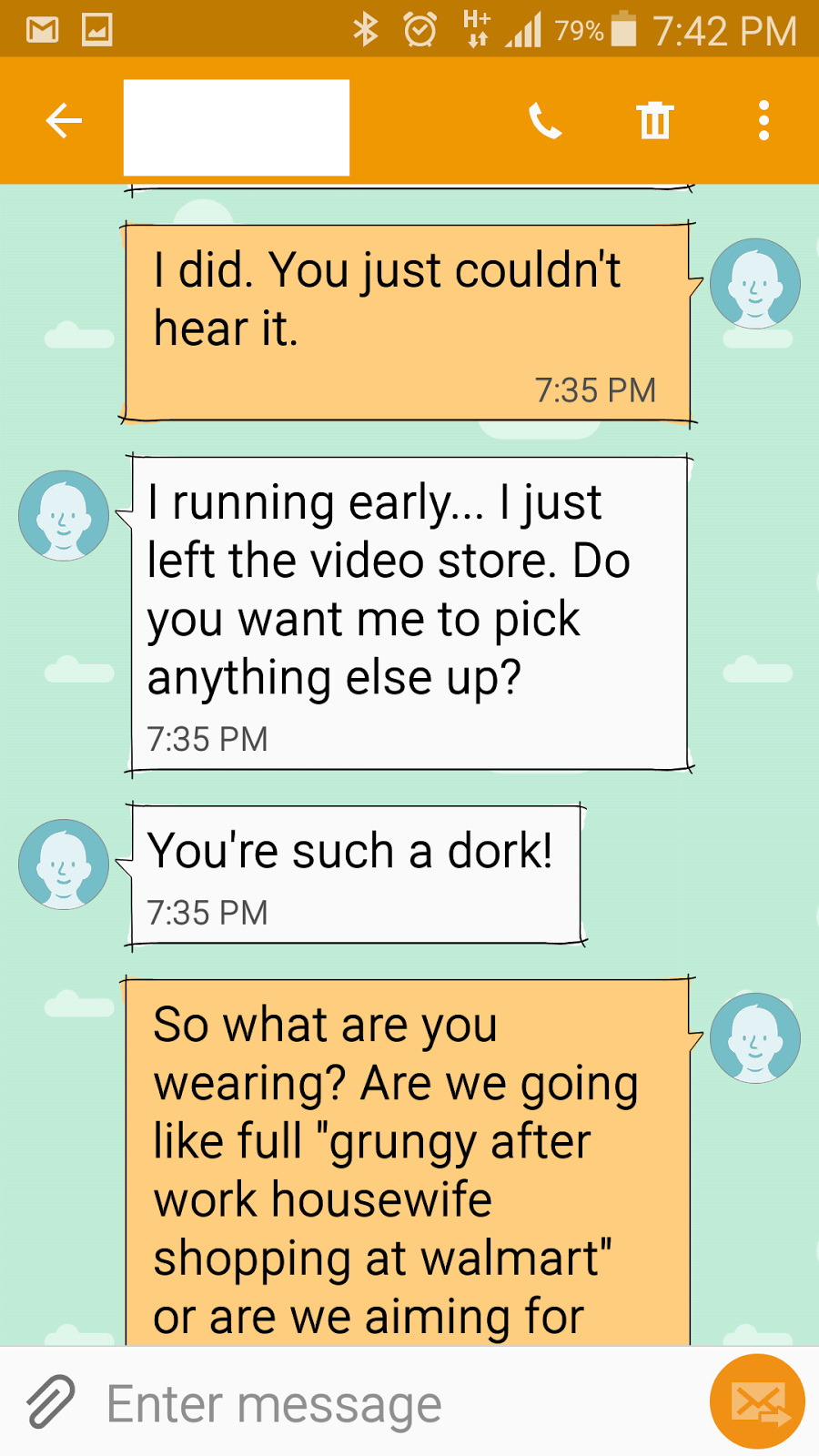 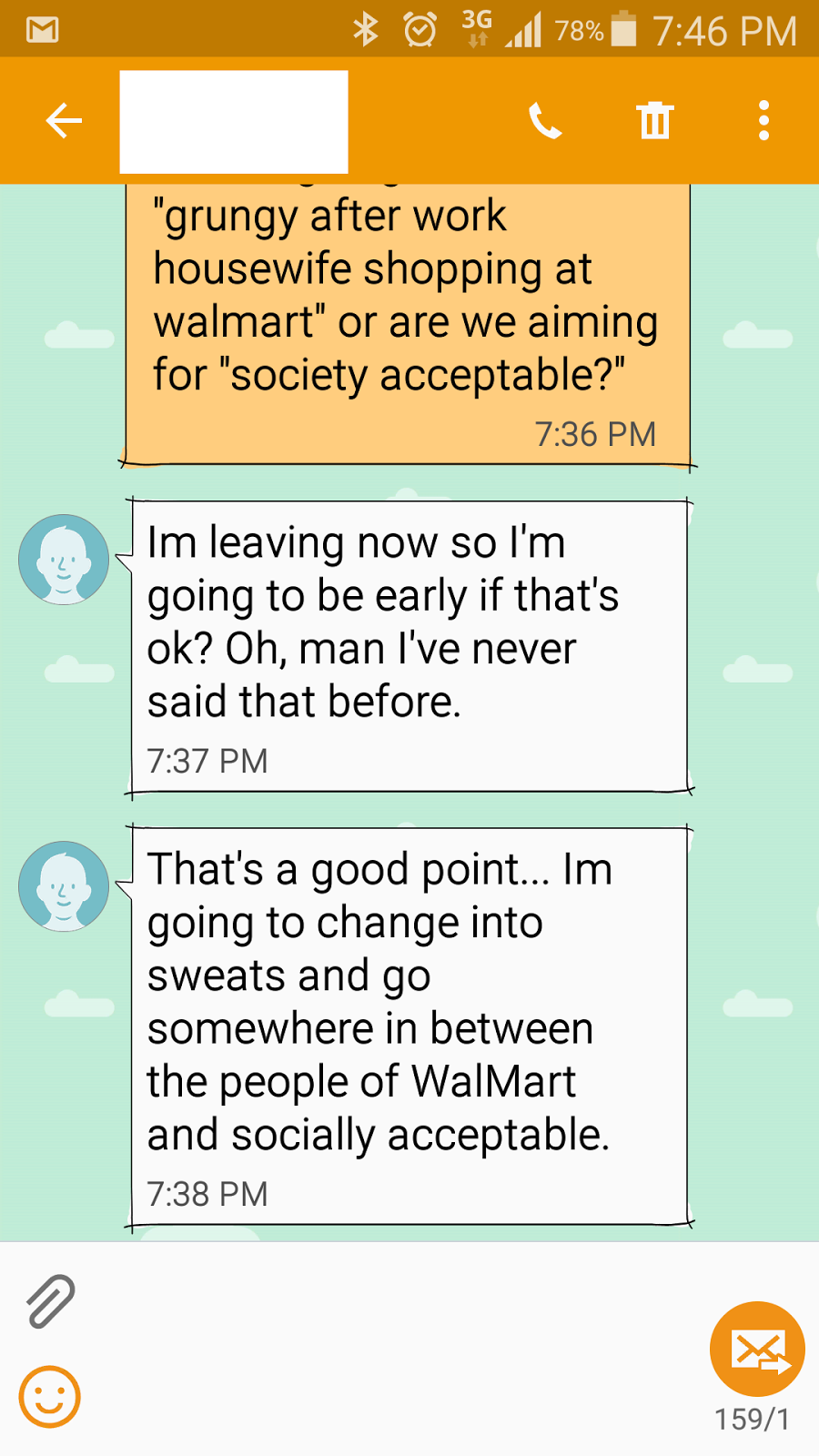 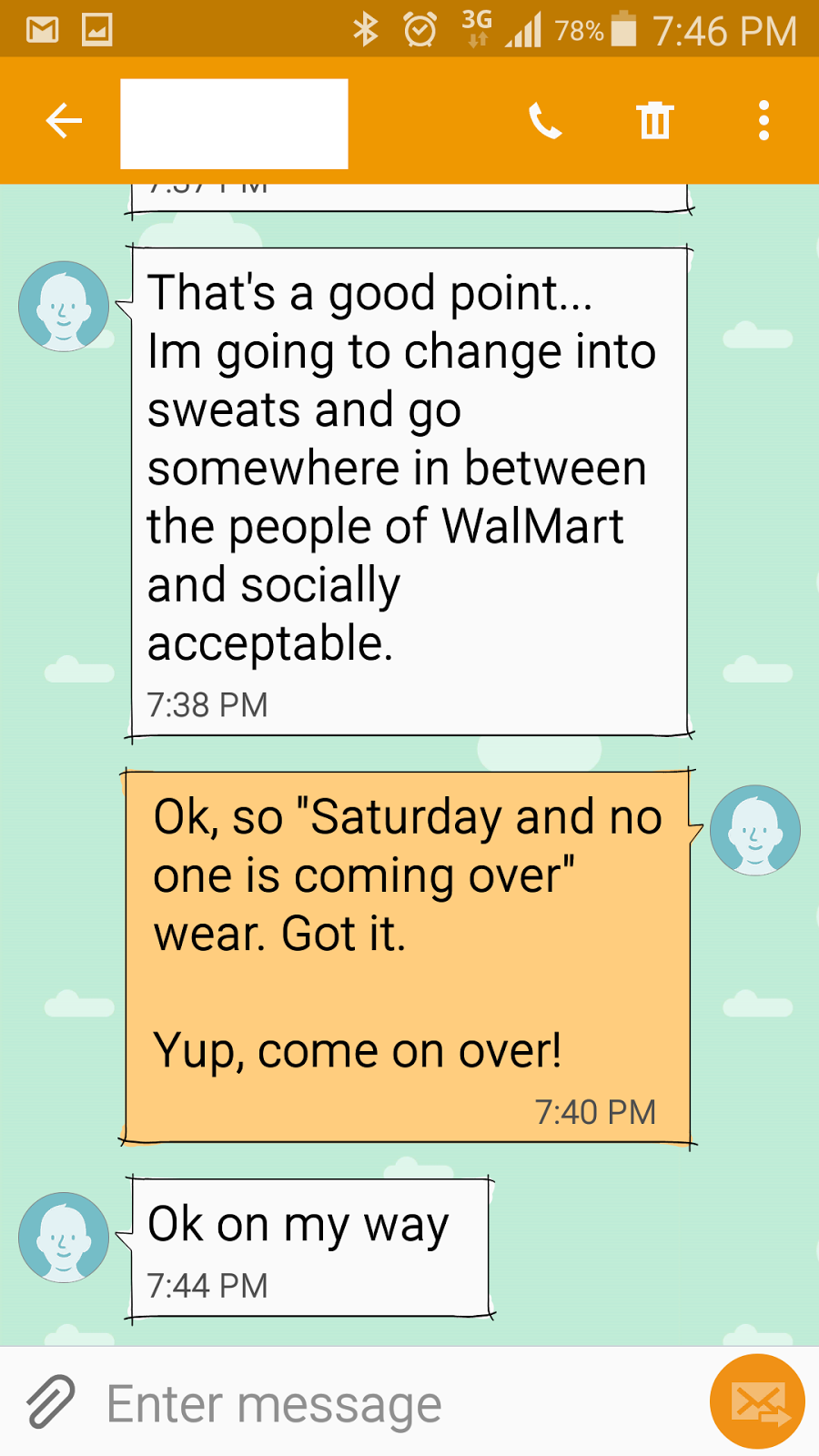 And as usual, before we started the movie we started talking about everything under the sun, which was how I ended up telling her about these ridiculous clothes that Frisbee Boy’s Mom had given me to try and sell (in all fairness they were also given to her, but still…)

“And there is no way anyone is going to buy these things,” I explained to my Platonic Hubby. “Not unless I start shipping to the compound. I mean seriously, unless you are looking to go as a Duggar or an 80’s inheritance queen for Halloween, no one is going to be buying these clothes.”

So naturally, we decide that we must try them on.

(You will have to forgive my Platonic Hubby, she was laughing so hard that she couldn’t hold the camera steady).

I put on one of the outfits and was only more confirmed in my feelings that no one outside of a cult would ever buy them.

So I wondered, what if I tried work it a little bit? 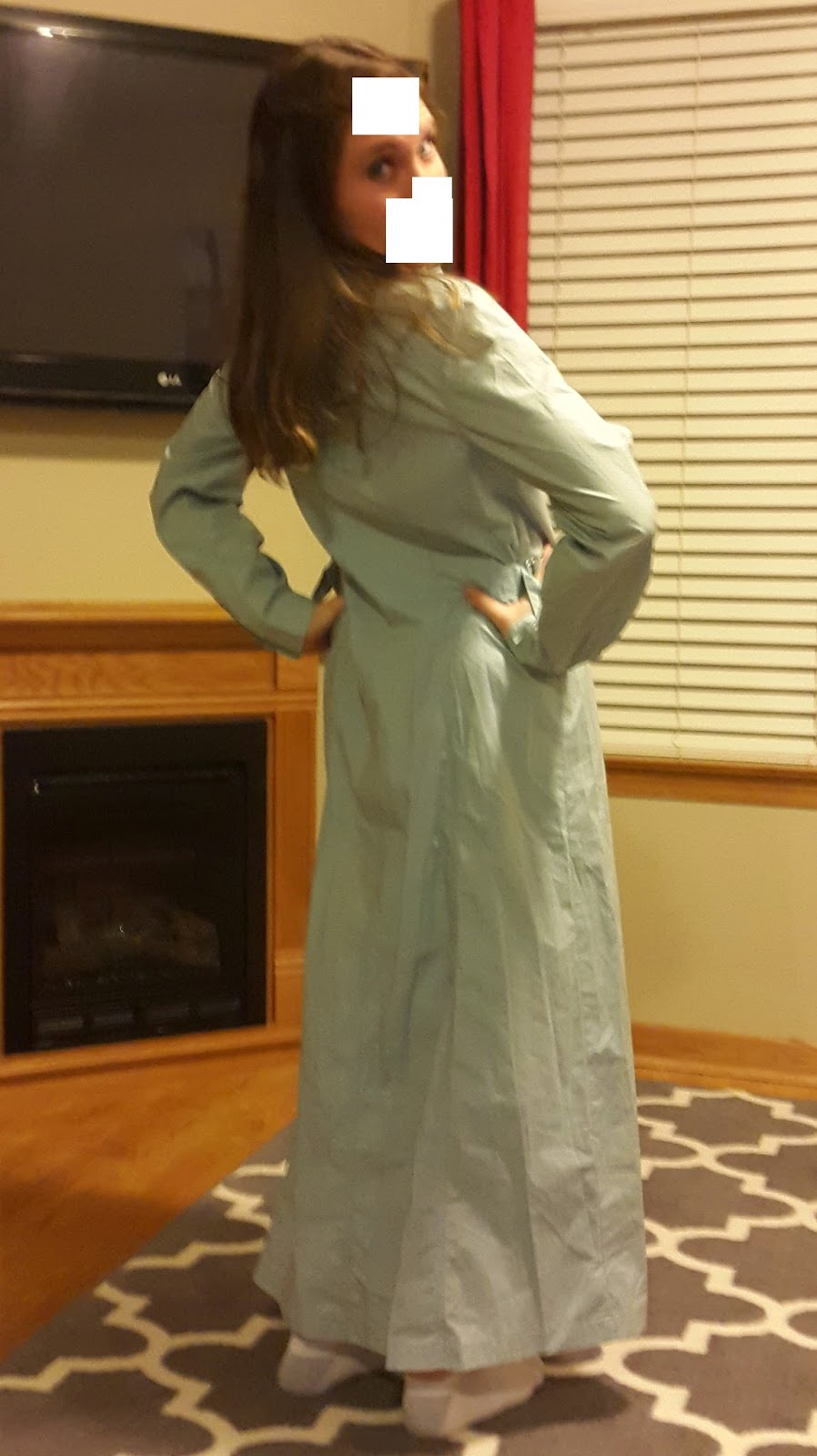 You know, show some knee, sex it up a little?

Which obviously alerted us to the fact that the entire front of this denim catastrophe was only snapped shut, which of course in our dirty little minds meant “this could totally be like the dirty wife outfit where you show up at your husbands work and just rip it off in his office!”

That was exactly what you were thinking, right?

We laughed, and then, because it’s me, and my Platonic Hubby is who she is, we wondered what that might look like. 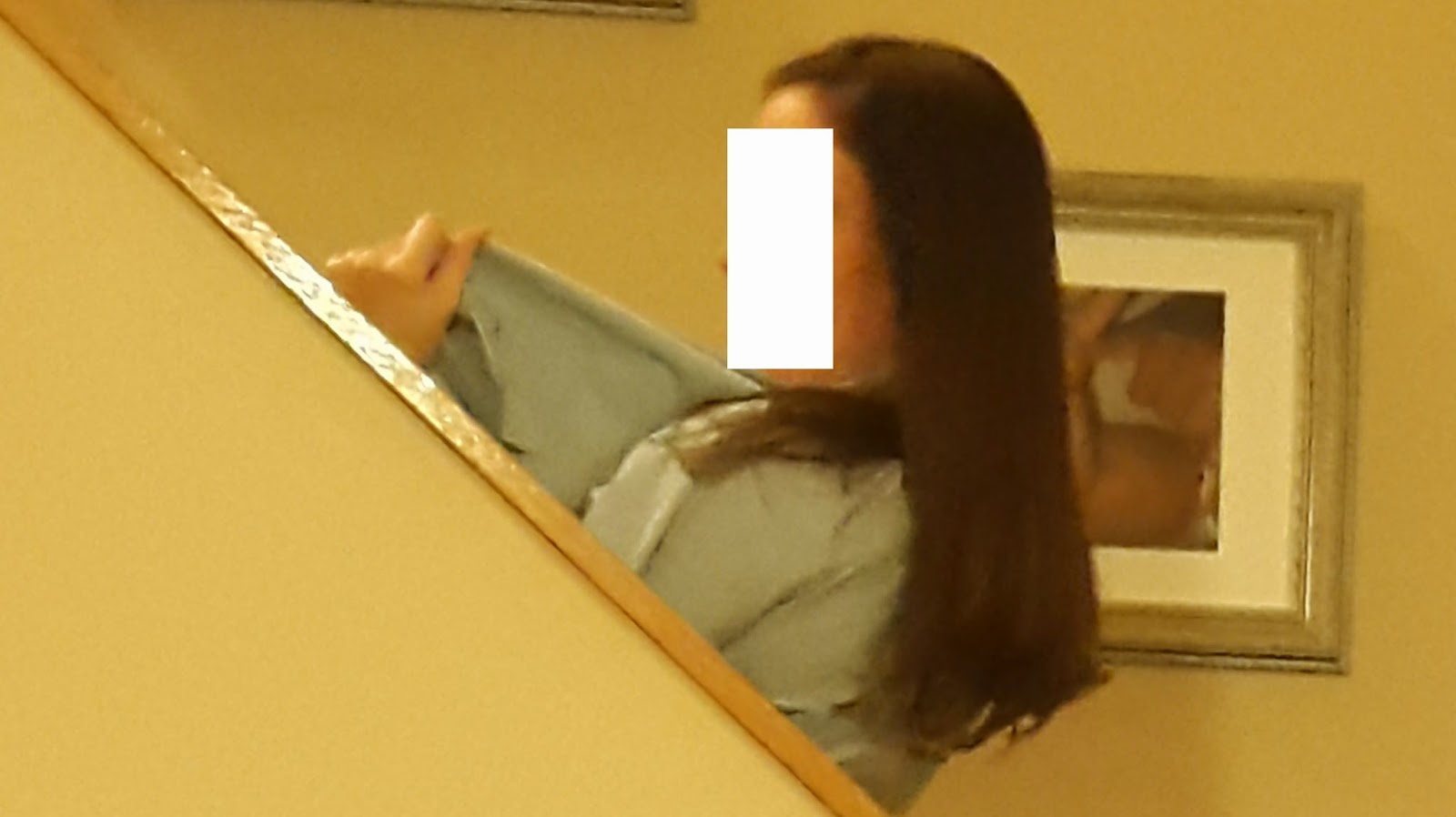 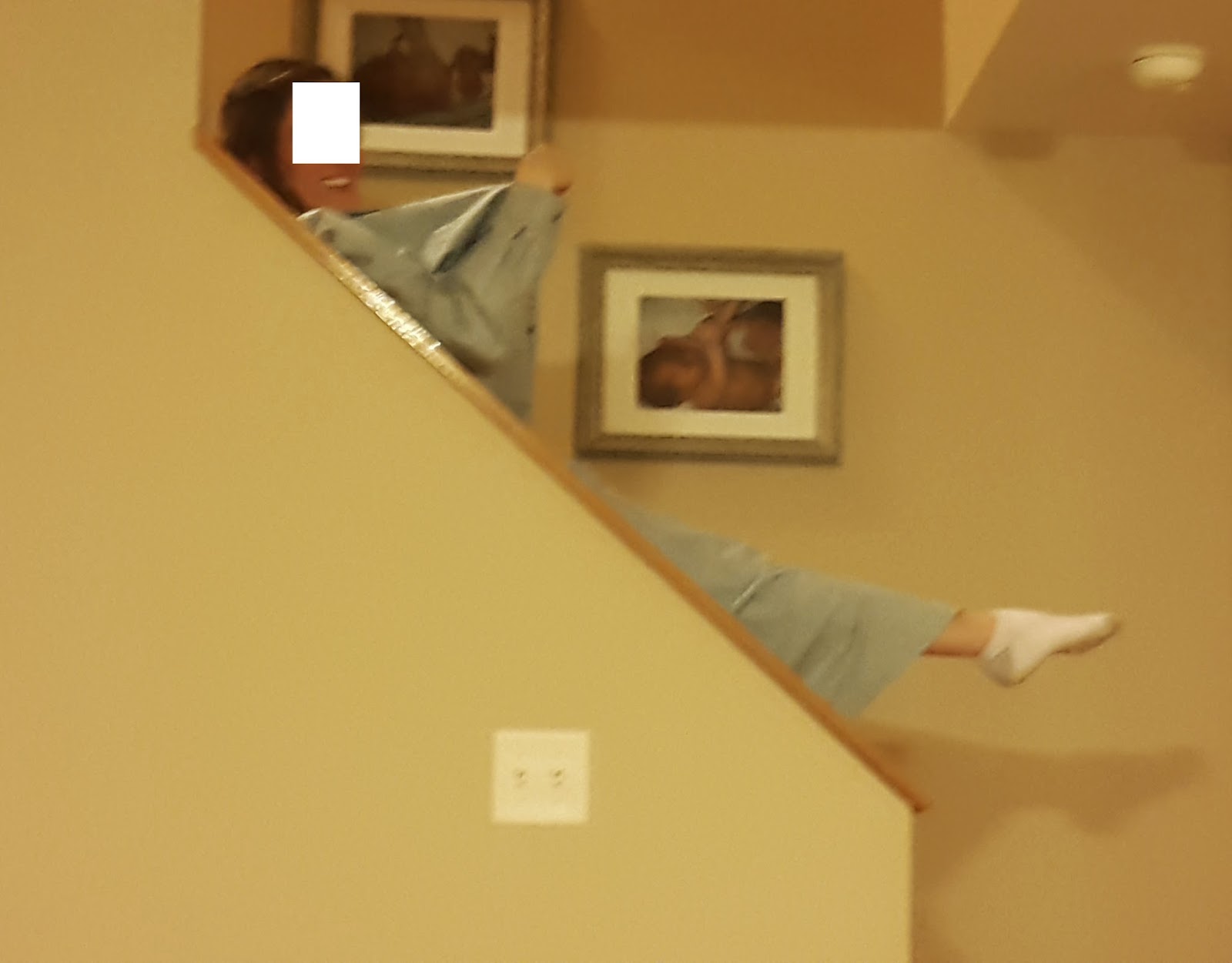 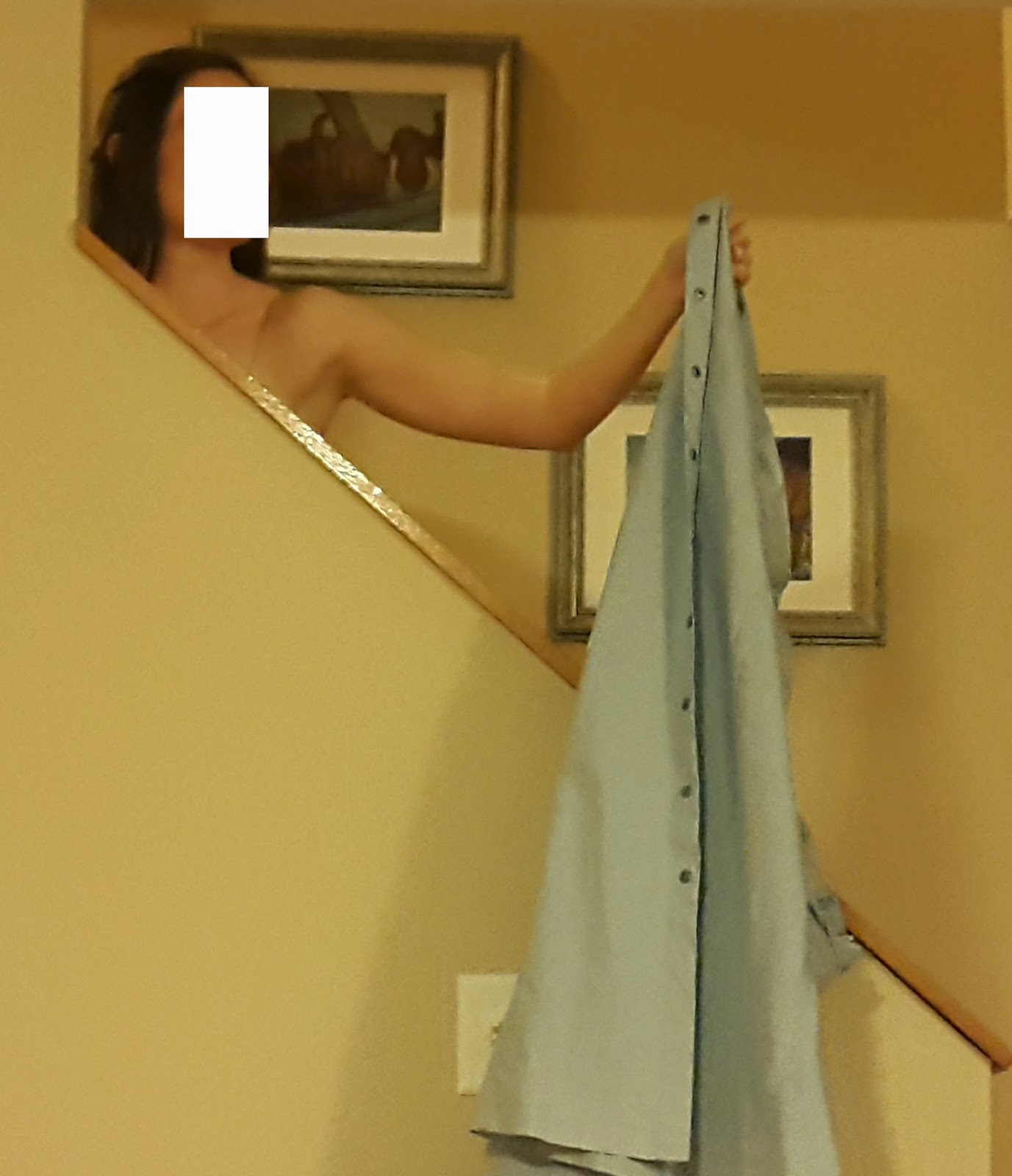 So basically what I’m saying is that when you hang out with me, what starts off as an innocent movie night with a sex tape, might end in a strip tease.

I never claimed to be normal.

My Platonic Hubby on the other hand, she grabbed the jacket that Frisbee Boy’s Mom wanted me to sell, and started rocking what she called her “pimp look.” I wish I could post a video on here because she had the bouncin’ walk down so well that it makes me question what she may have done in a past life. 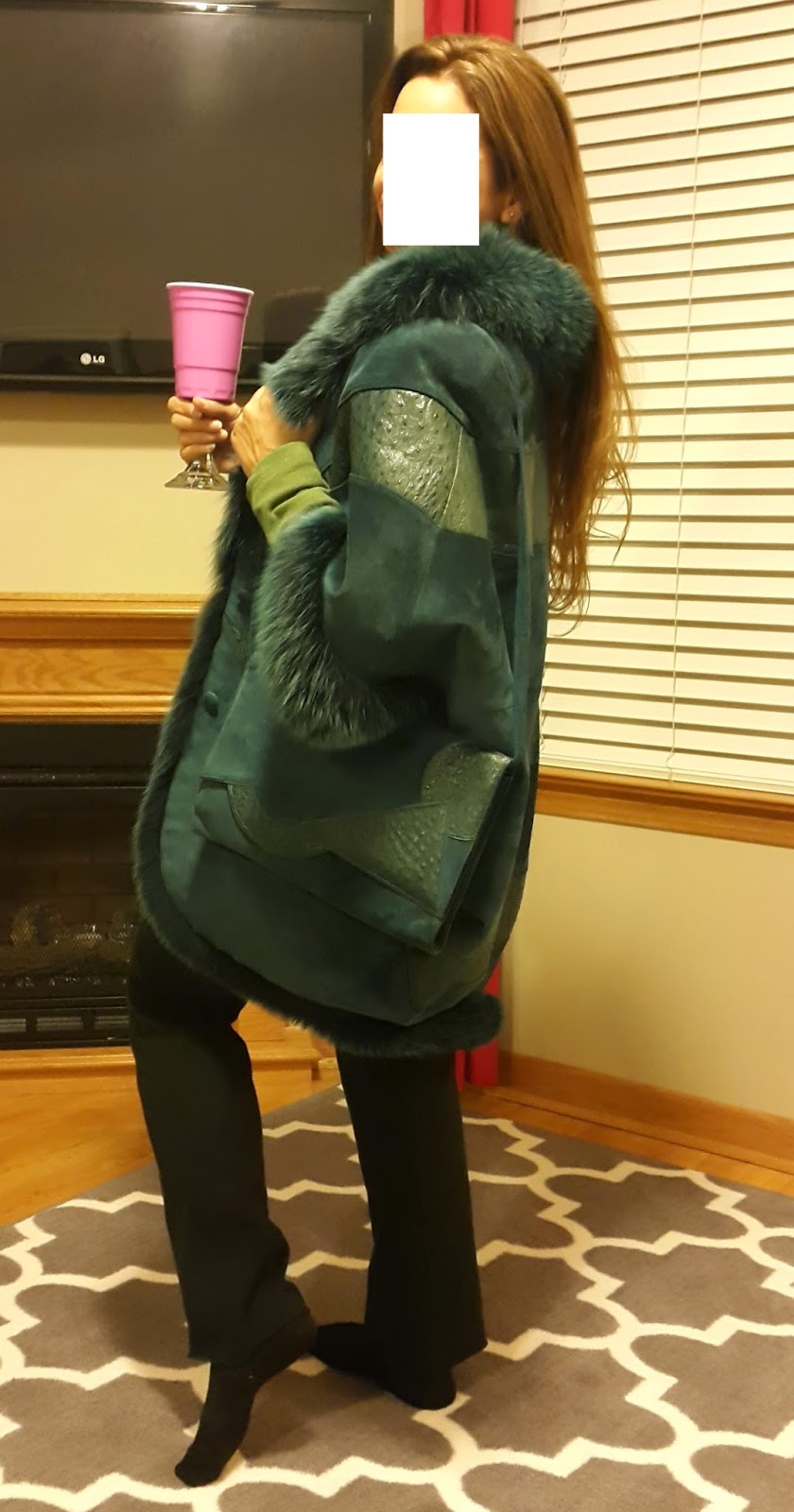 Because nothing says “buy me” like an ostrich and fox jacket that has been dyed green. And bonus!! It comes with a matching purse.

So what have we learned here people? That Eden needs medication people will try and sell some really weird shit.

Since then I’ve been on the lookout for other weird shit that people sell.

It hasn’t been hard to spot. In fact since I started paying attention, I’ve noticed these nifty little treasures come across my newsfeed from a Facebook sales page:

Not creepy at all! For only $25 Santa really can watch you, know when you’re sleeping, and when you’re awake… all up close and personal style as he stands 6ft tall in your living room. 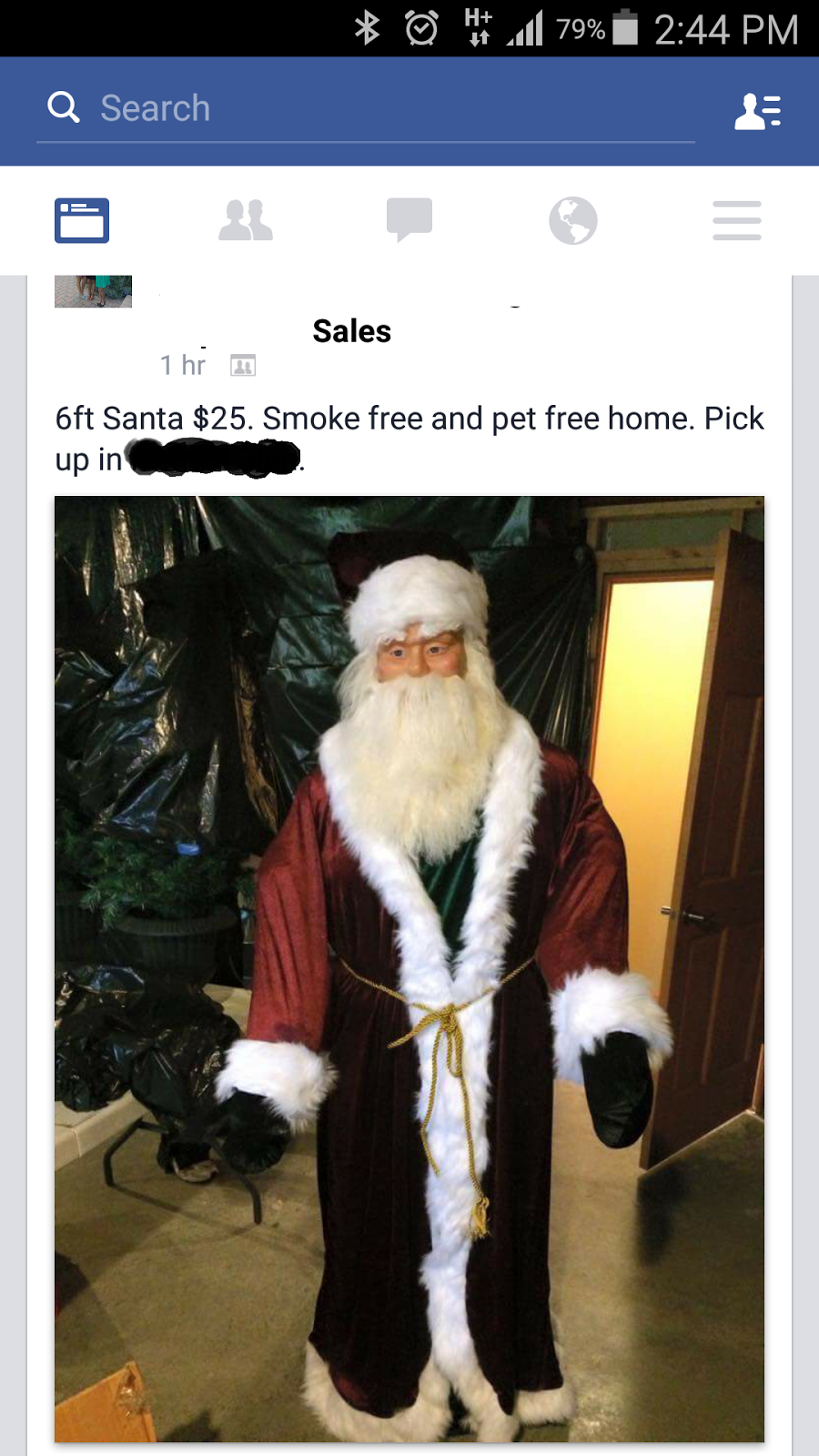 Is it a broom? Is it a snow blower? Nope, it’s both!! For people who don’t want to shovel but aren’t fully ready to commit to a snow blower, you can ease yourself in with this hand powered snow broom. 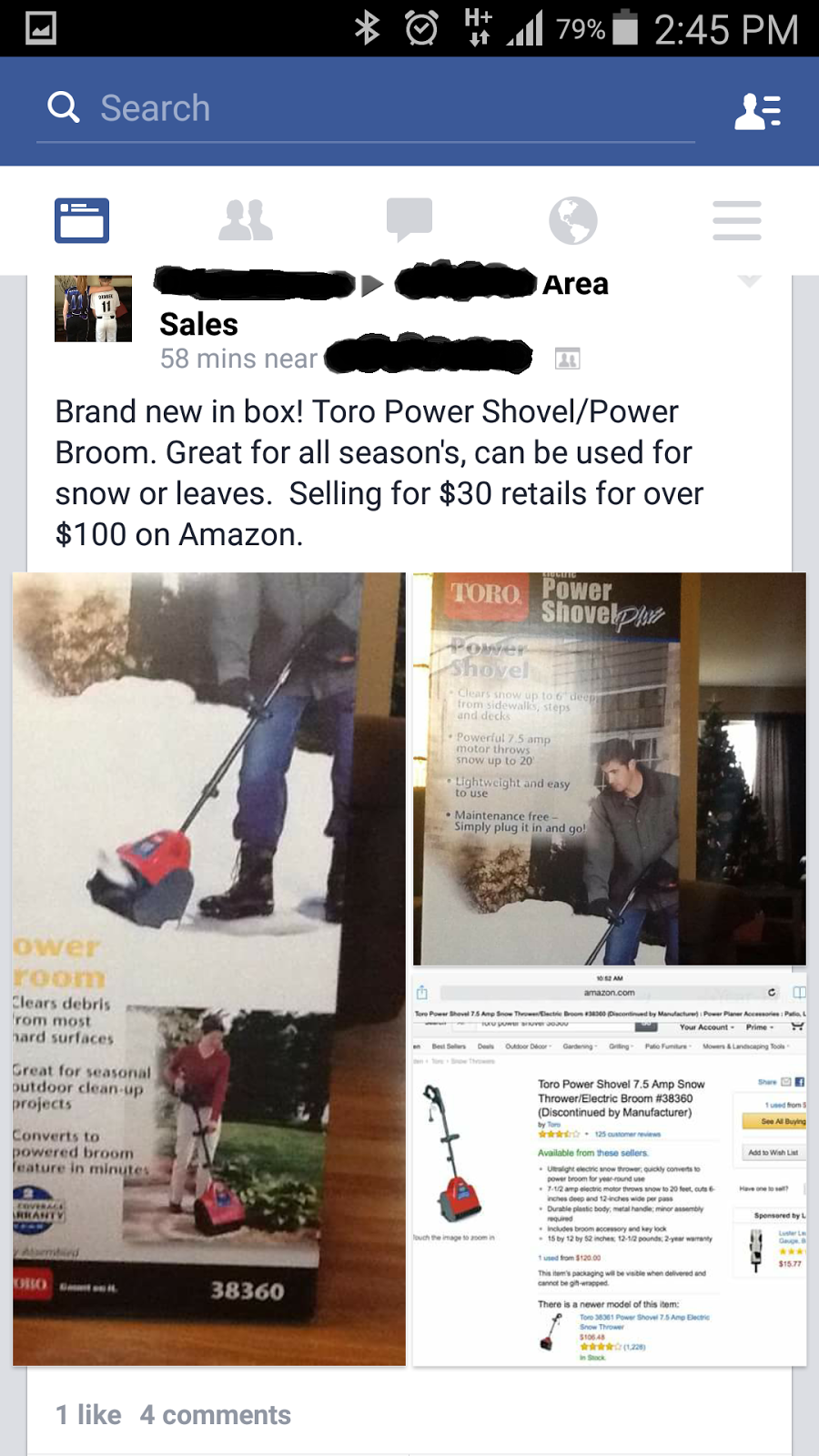 Nothing says “sexy” like what I’m calling a “Mightygown.” 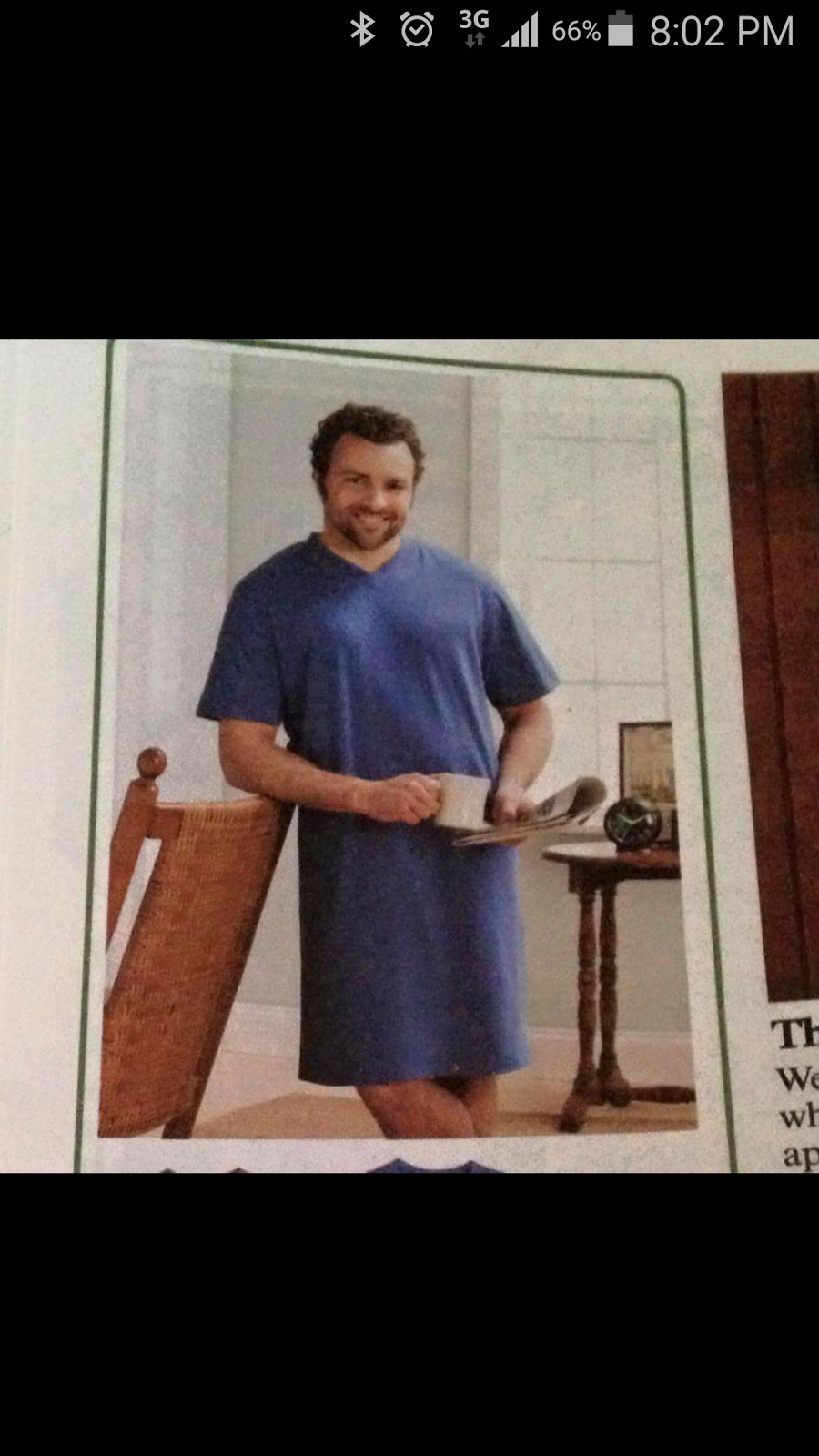 This one got me a little excited, seeing as how I would no longer have to pick up gas for my treadmill… you know, if treadmills took gas. 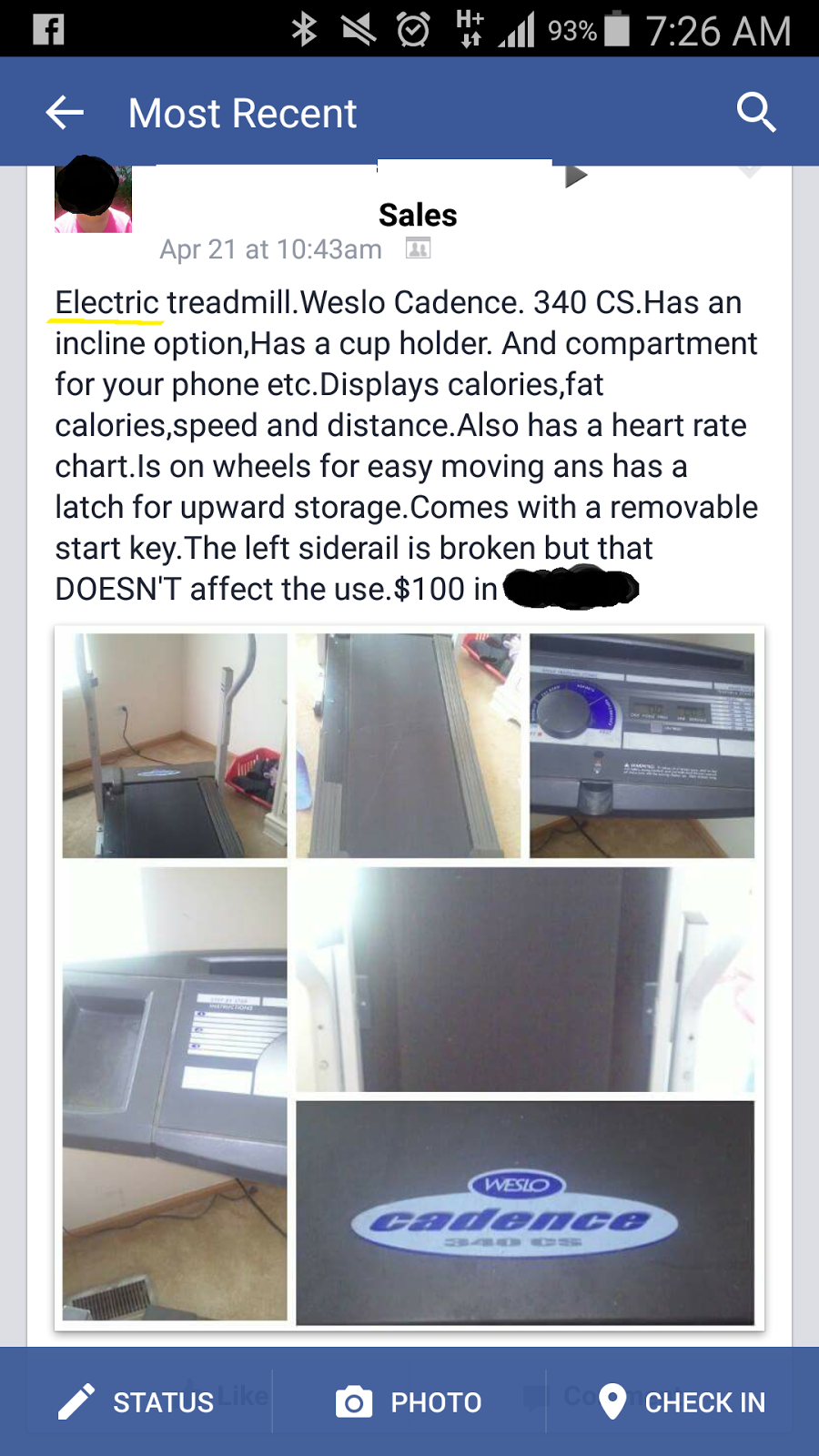 Is there really any other kind of treadmill?
Also, I knew you couldn’t sell animals on this site, but leave it to someone to find the loop hole because apparently this chick is selling her grandma:

“She blew my inheritance on Bingo so I’m throwing her ass out!”
And if you’ve already sold your grandma and are now in need of someone to watch your children, this new daycare just opened and they specialize in education! I’m just not sure in what language that education might be given… 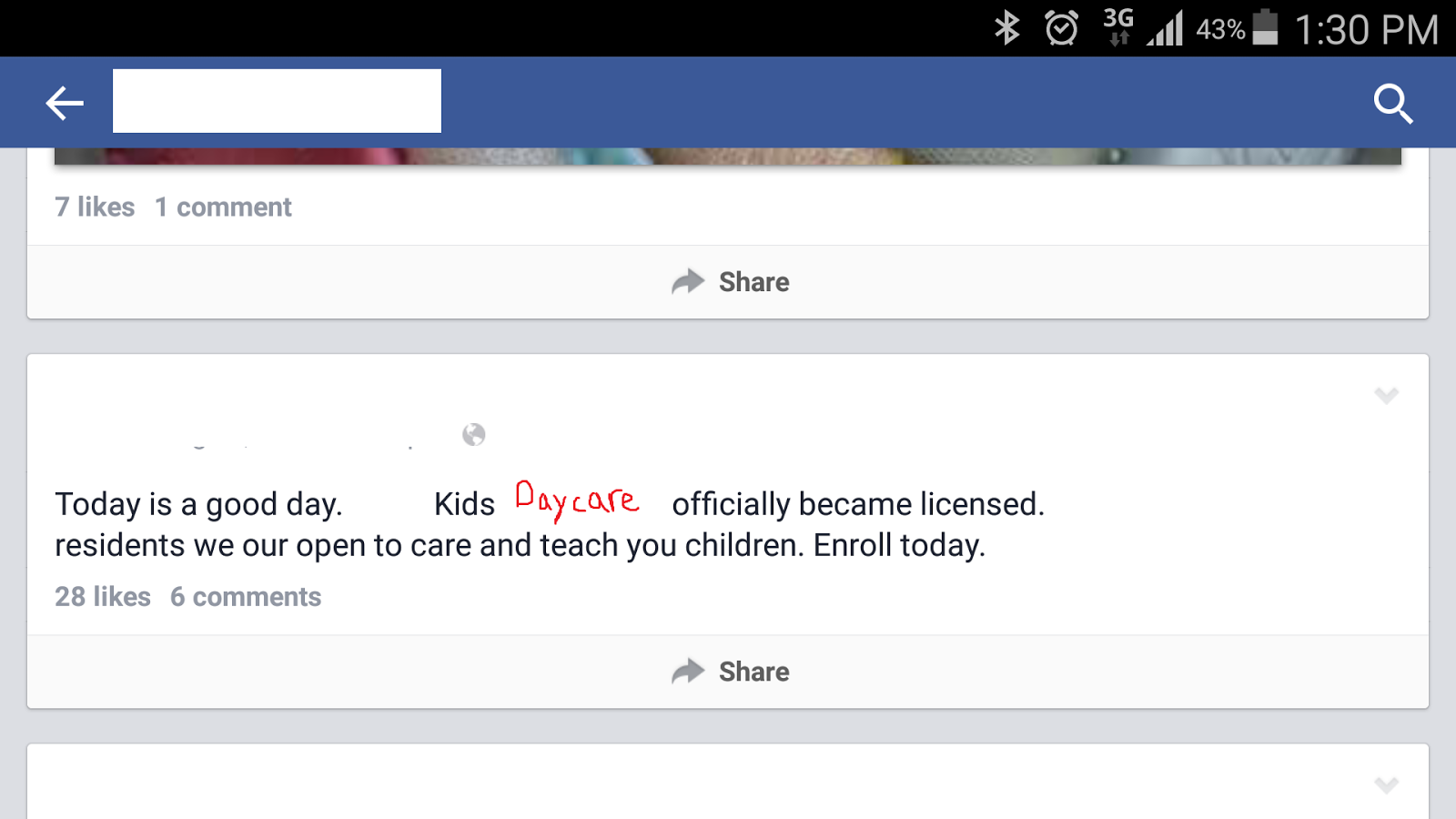 And it’s not just one person selling something weird, sometimes other people get on board as well. I was at Goodwill not long ago and came across these hot deals, items that not only did someone donate, but then Goodwill agreed that they were worth selling.

Two birthday candles. Two. One and then another one. One candle, and then one more, but no more after that. Now this might seem like a great deal, buying ONLY what you need, but in reality I’m not thinking that the price per unit is that great of a deal…

Photo frame complete with the family you wish you had, people that someone else no longer wanted. 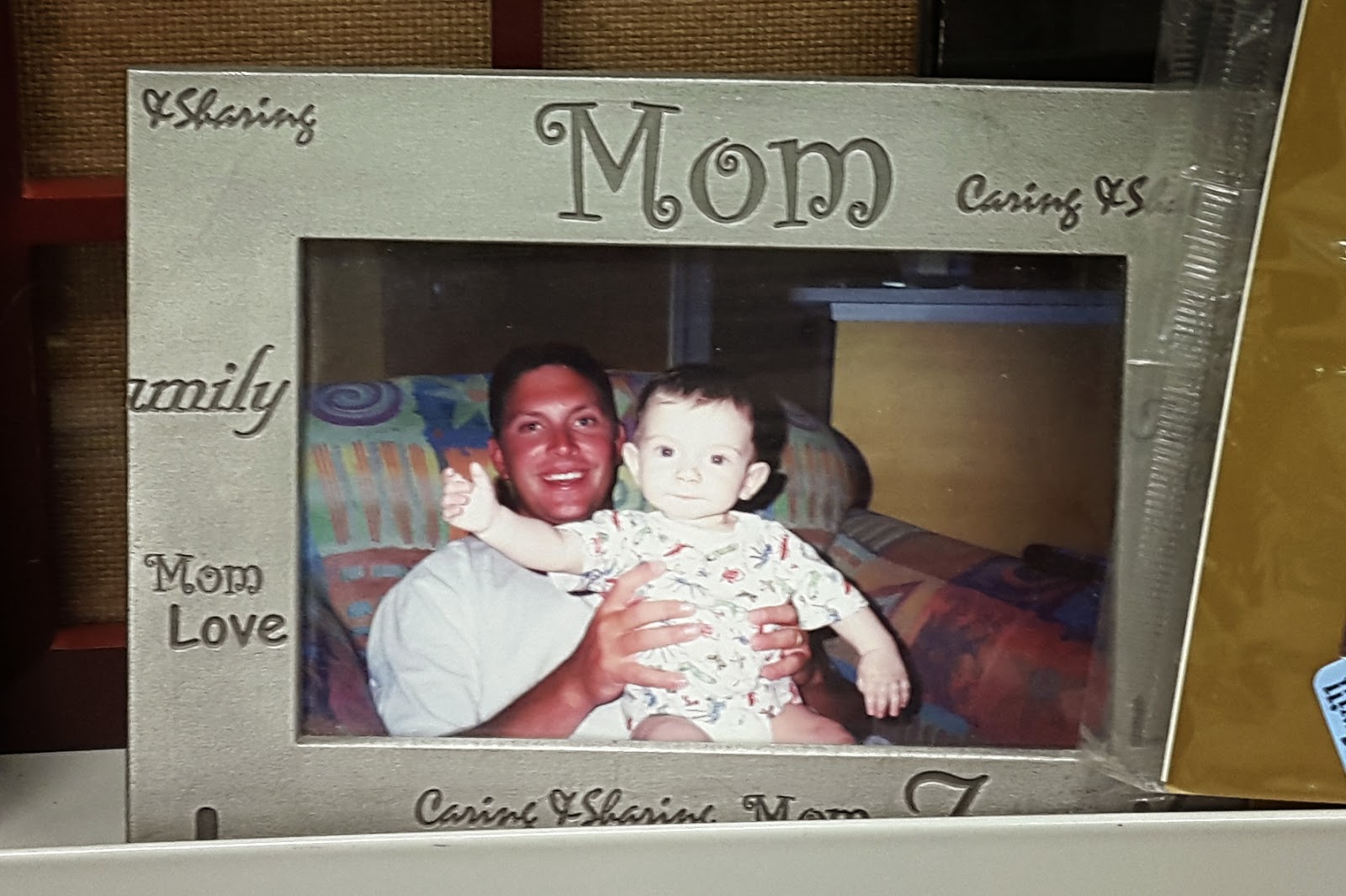 Sunglasses for someone with either a prosthetic eye or a person who only drives when the sun is to their right. 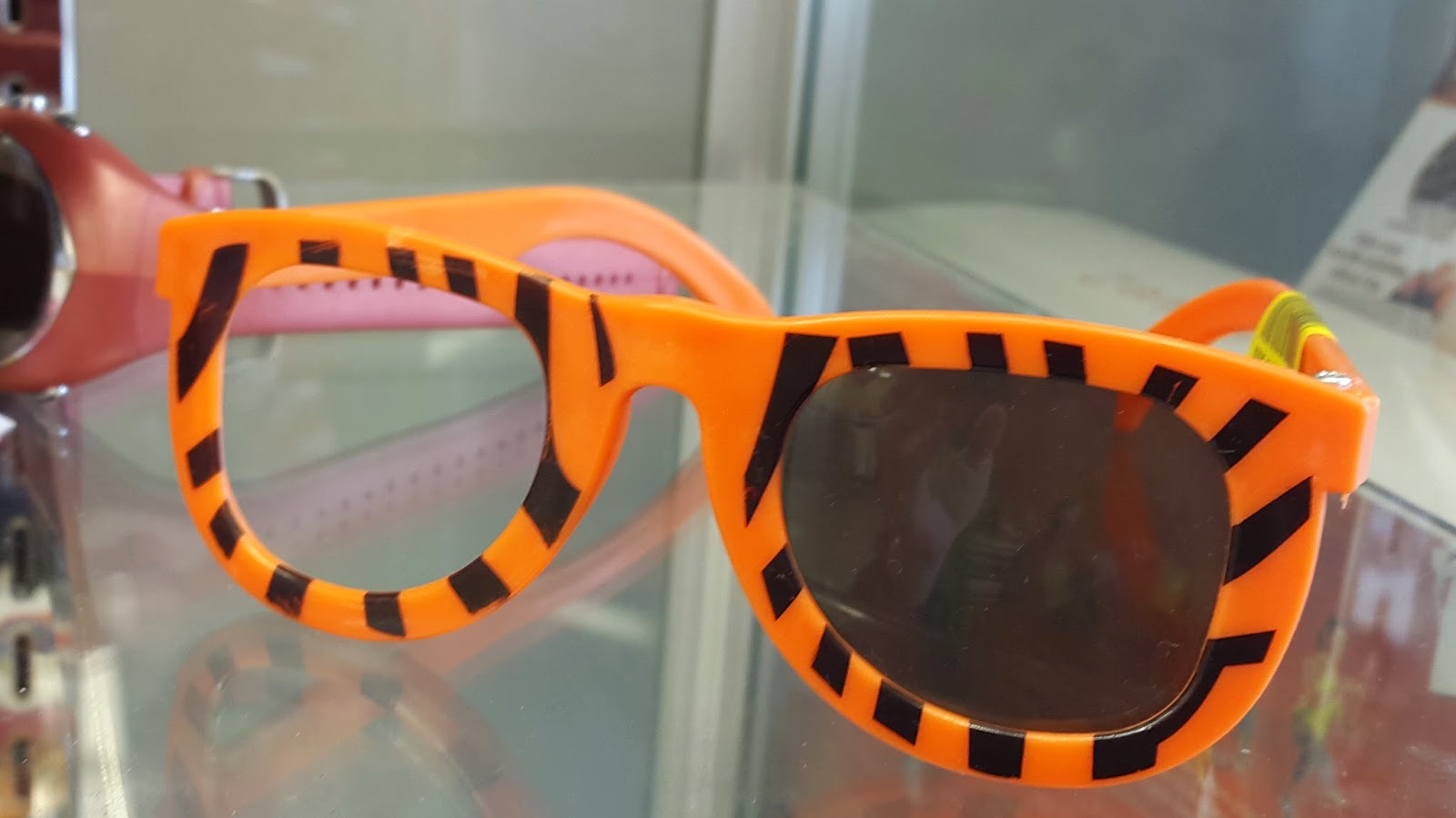 I just so happened to be at Goodwill with Frisbee Boy’s Mom and no, I did not let her buy anymore Duggar apparel for me to resell, but she did however yell from across the aisle “EDEN! I FOUND CFM SHOES!!”

When I asked her what CMF shoes were she looked at me as if I were a complete idiot and said “Really? You don’t know what ‘come fuck me’ shoes are?”

She then insisted that I try them on.

“I can’t walk in those shoes, I’ll break my neck!” I exclaimed, to which she once again looked at me like I was an idiot and said “walk in them? You don’t walk in them. You lay on a bed looking sexy and you send the signal that says ‘come fuck me’.”

Oh well in that case, sure, let me cram my feet into another person’s sex shoes.

BECA– USE WHY NOT. 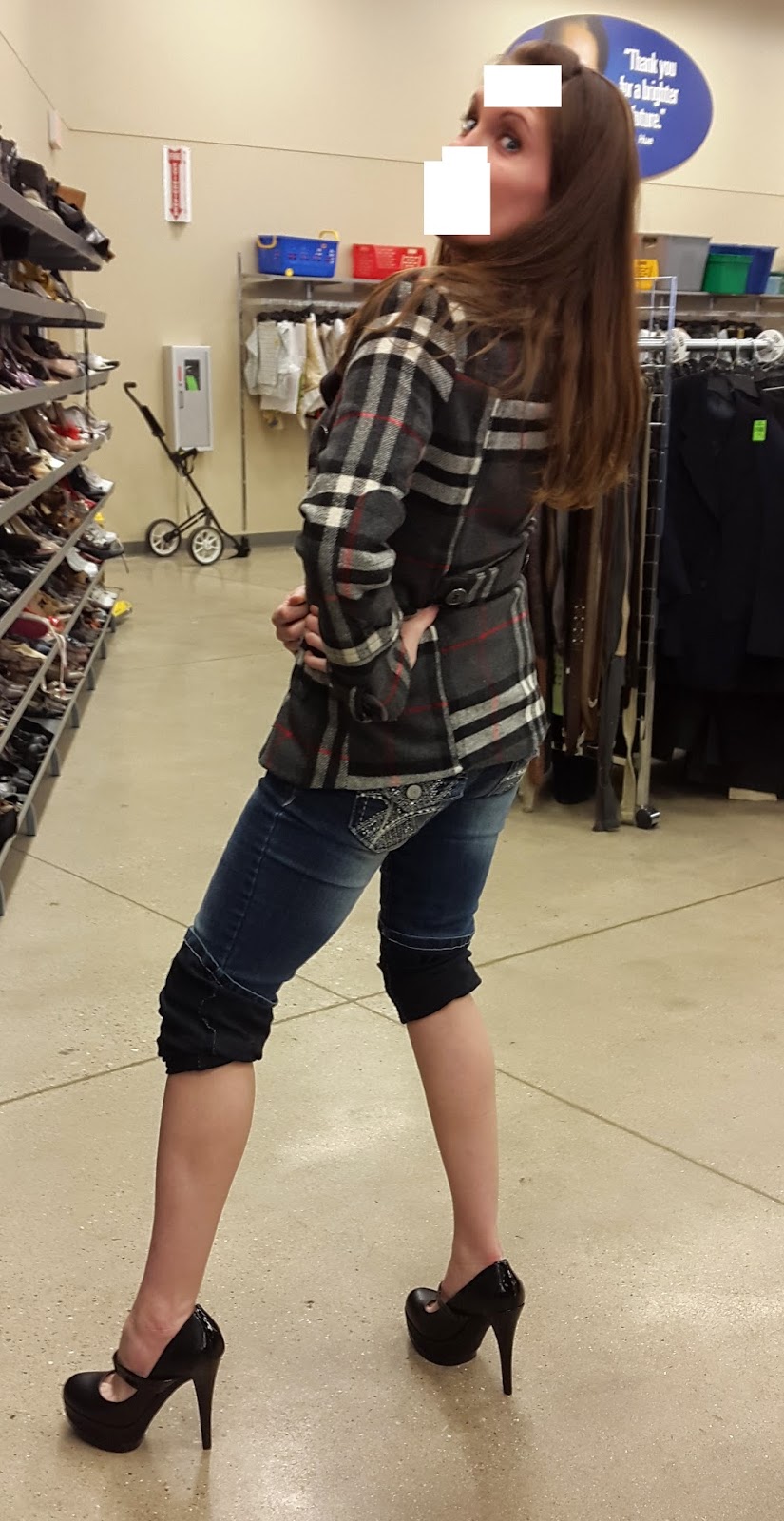 And while I’m at it, why don’t I also put on a bra which happens to be the exact one that I was wearing under my coat. 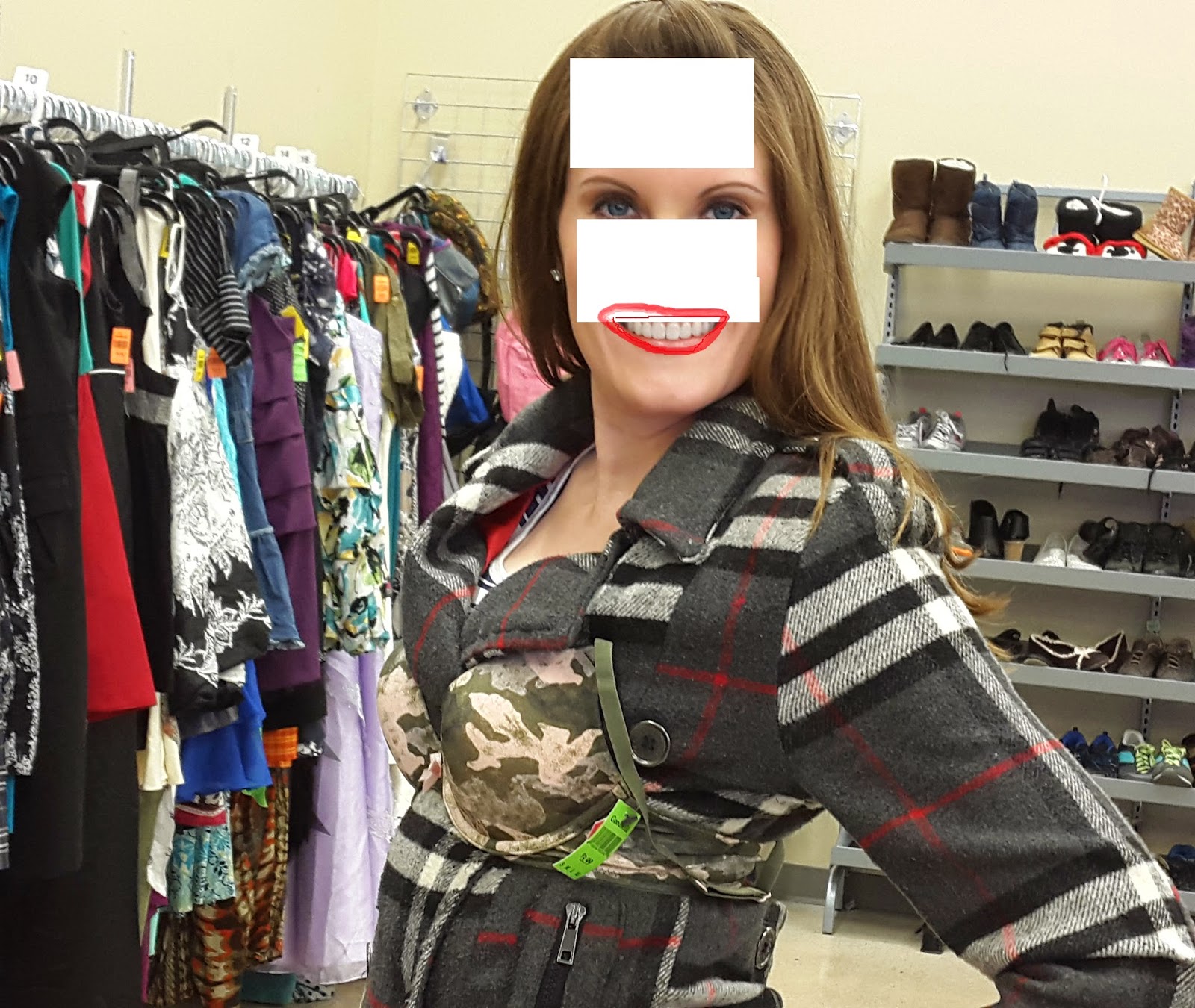 We putzed around for a while and I found shoes fit for a giant, 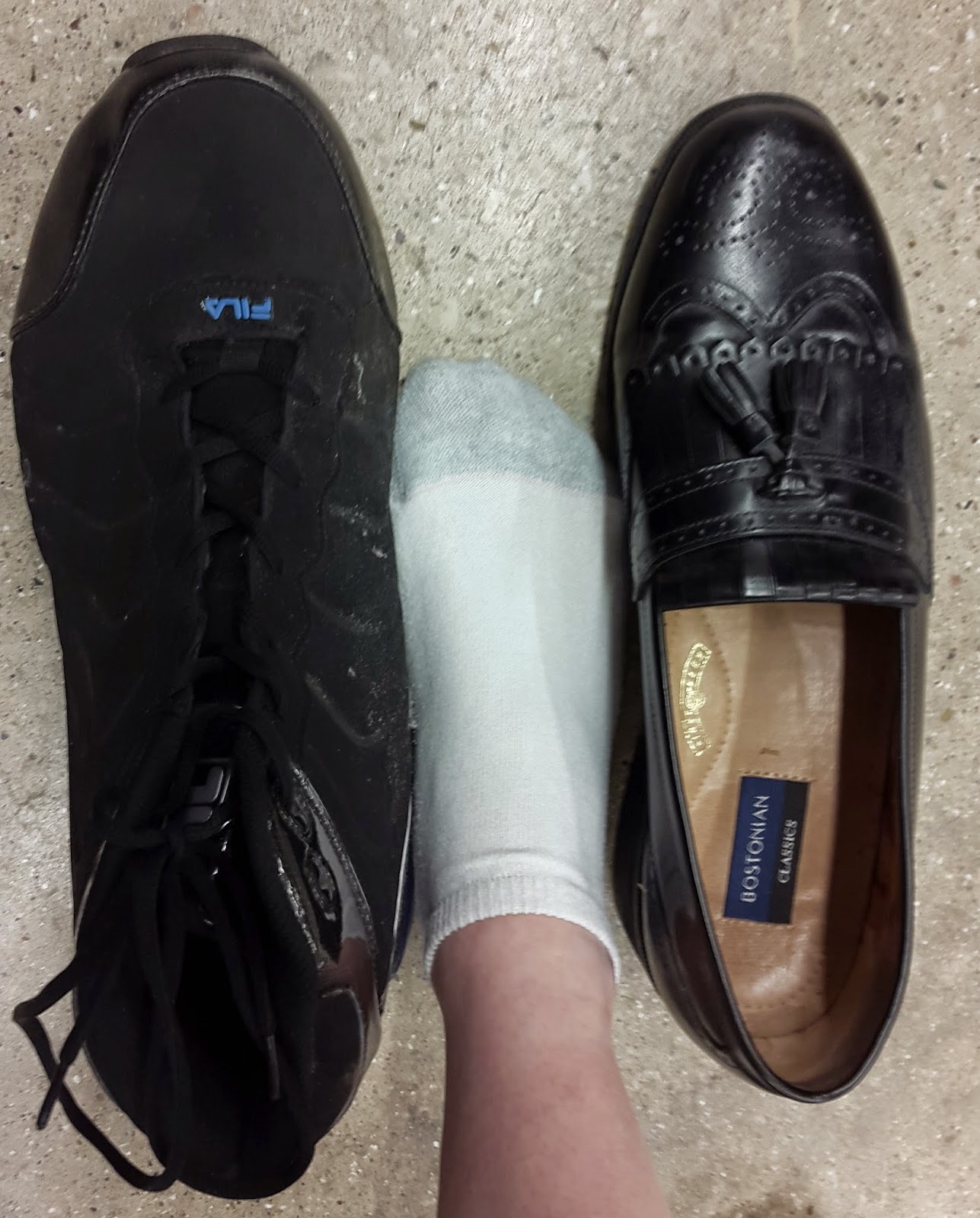 While she found something tagged as a “foot pillow,”

… and then I got to give her my own “are you an idiot glare” when she came across a smart cycle, (which is part of a gaming system for children, think Fit Board for the Wii) and said “what the hell is that? A stationary bike for fat kids?”

So I guess it just goes to show that people will sell anything, buy anything, and half the time you don’t even have to know what it is.

Or sometimes you do know what it is and you still don’t want to buy it, like this nifty item I saw at the store the other day. There are like 8 reasons that I don’t ever want to buy this, all of which include the fact that toys/games, my son’s man parts, and pee, are not something I am ever willing to lump together, especially with anything called a “shoot and spin.” 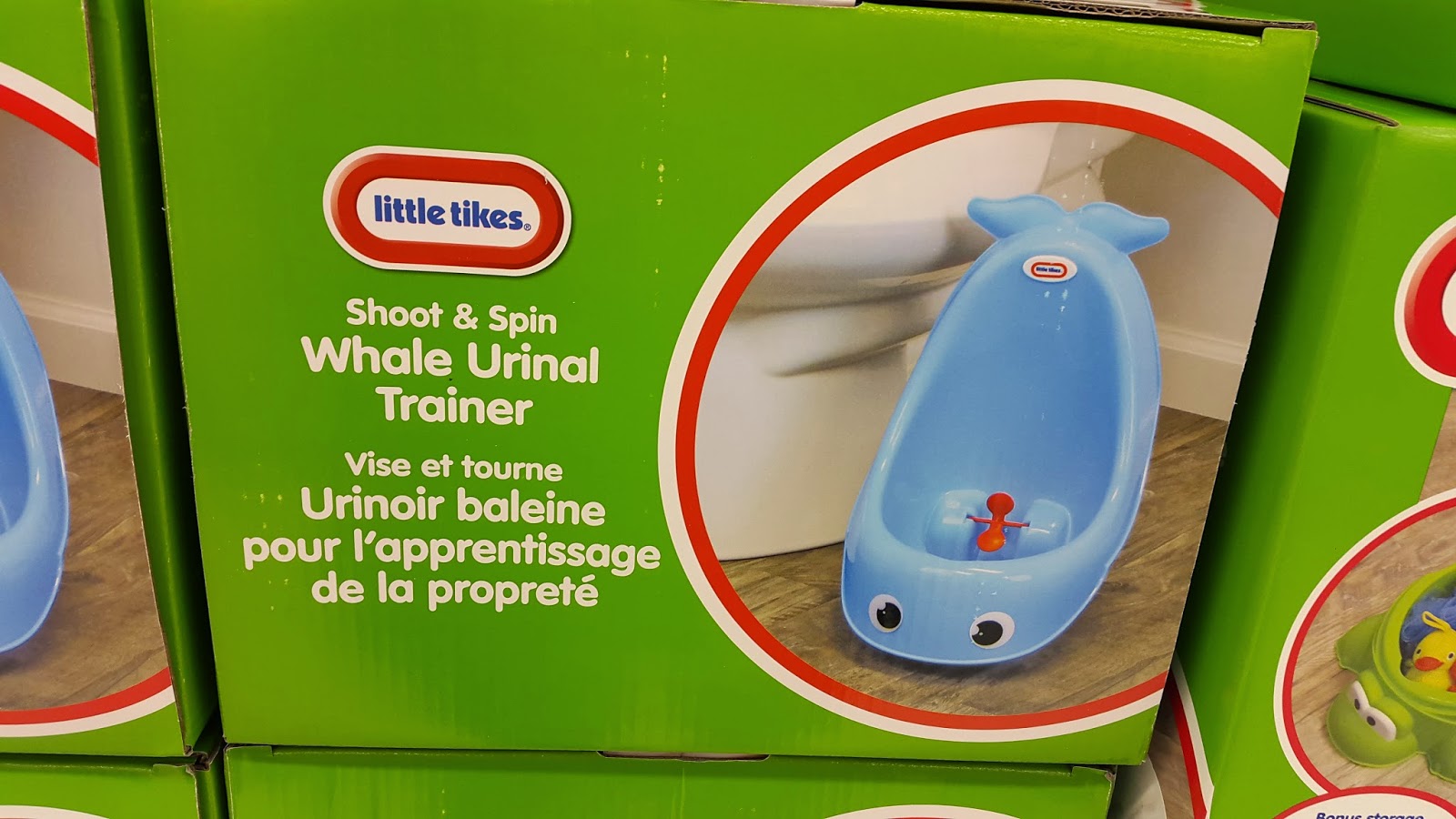 The best my kid is going to get is me chucking a cheerio into the toilet, telling him to aim, and then shutting the door. Sorry kid, this mommy is not hosing down a large whale that you were trying to piss into. Nope. NOT HAPPENING.

But, there were a lot of them there, so if you feel like getting one, no rush to hurry on over.

At the end of the day though, people really will buy anything, which is evidenced by what I saw when I walked into the daycare the other day. Did you guys know that my Platonic Husband is a teacher there? I’m sure I must have told you. But anyway, I walked in and was greated by this:

Me: “Hey, is it pajama day?” (wondering if I had missed it on the calendar).

And this is why we get along so fabulously. So I guess the lesson to be learned is, buy whatever the hell you want to buy, just be prepared to own it!

Surgical Update And Other Total Randomness

He Is Still Hurting Me