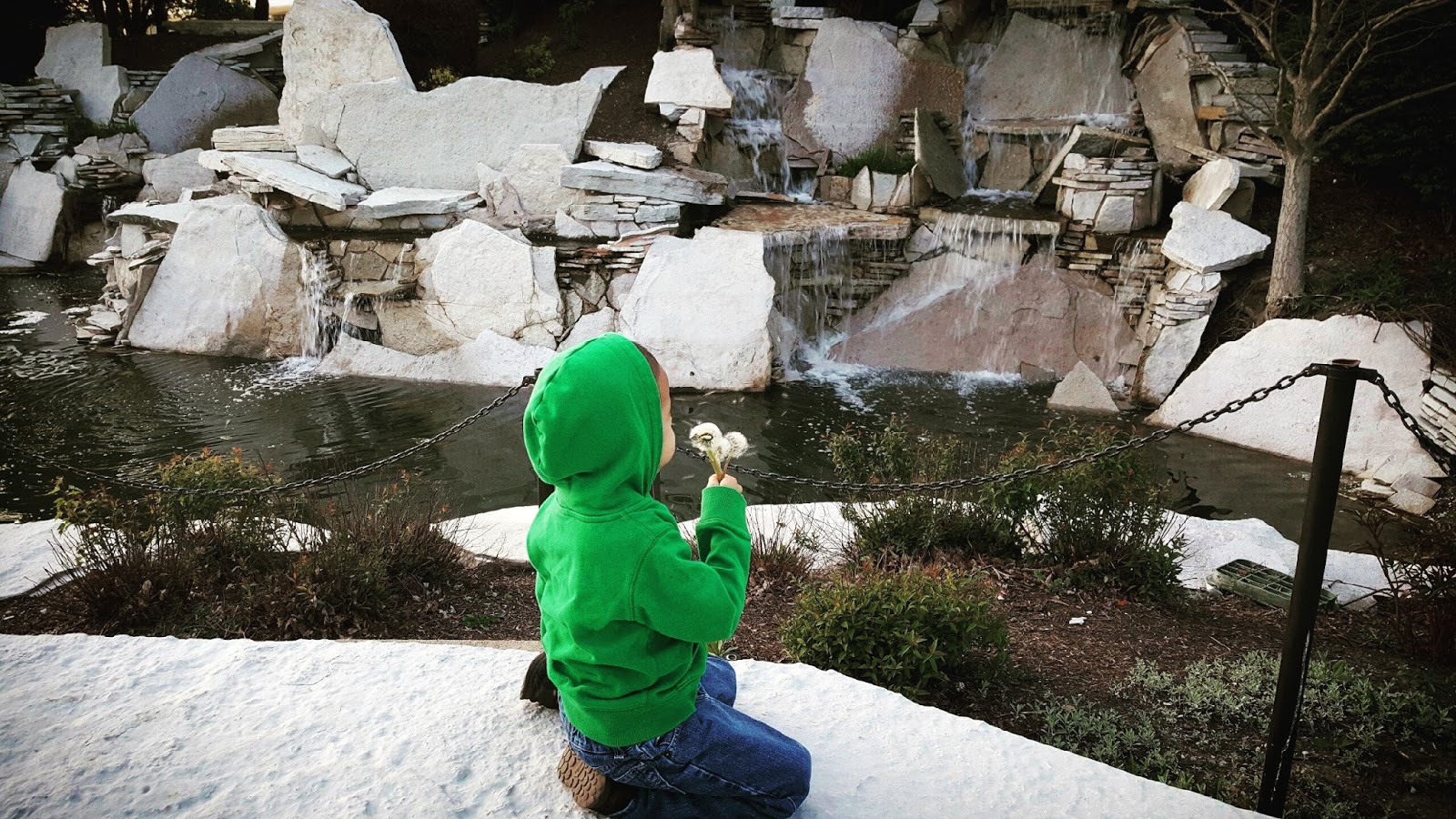 “Momma, I’m blowing on a wishing flower, and I’m wishing no more doctors”

Horatio G. Spafford, his wife Anna, and their five children lived in Chicago in the late 1800’s. Horatio was a successful lawyer with a booming business, when tragedy struck and pneumonia stole the life of his young son.

That same year, the Great Chicago Fire destroyed his business.

Not willing to give up, The Spafford family pushed on, rebuilding the business, and holding their family together.

Two years later, Anna and their four children boarded the ship Ville Du Havre, hoping to find some relaxation and rest in Europe, with Horatio joining them a few days later.

But as fate would have it, tragedy struck again when the boat collided with another, causing the Ville Du Havre to sink.

Anna was found floating on a piece of wreckage, all four of her remaining children drowned. “God gave me four daughters” she said to another survivor. “Now they have been taken from me. Someday I will understand why.”

She then wired Horatio a message that simply said, “rescued alone, what shall I do?”

I didn’t want to come back here; back to this blog. Pages of my struggles, triumphs, chuckles, and tears, all melting together to showcase one thing; My Life.

When I first came here, I set out to see if anyone else felt the same way I did. I was looking for a light to lead me down my darkened path.

But somehow, I ended up being that light, for many of you.

I was sitting in my car the other day, exhausted from holding a seizing child in my arms all night long, when a song by Mercy Me came on the radio, called “Even If.” Listening to the lyrics (in bold throughout this article), it felt like the air was being sucked from my lungs, while the words were being torn from my soul.

They say sometimes you win some
Sometimes you lose some
And right now, right now I’m losing bad
Things haven’t been easy lately, and although I am no stranger to difficult things, these last few weeks have brought about a type of vulnerability that even abuse and rape never exposed me to.

I fear that I’m losing my child.

Seizures continue to ricochet through The Boy Child’s brain at night, robbing him of his cognitive functions, and the ability to control his own body.

Nothing is off limits. 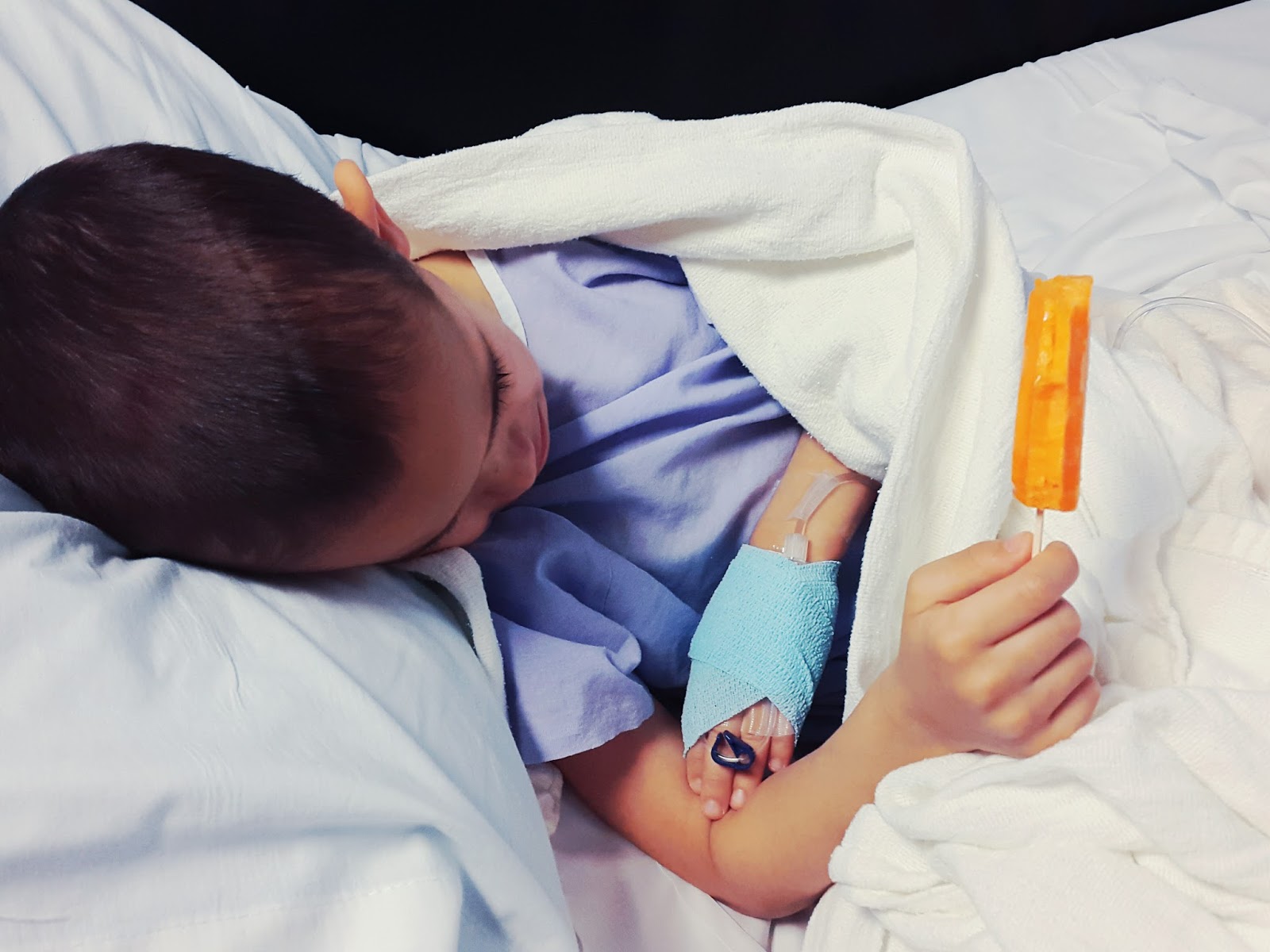 His room — which used to be filled with Ninja Turtles, and Legos that he would hide under his sheets to play with when he was supposed to be sleeping — has now turned into a virtual prison.

Rails on the bed so he isn’t thrown onto the floor, a camera so we can watch him, a baby monitor so we can hear him, an extra mattress so we can sleep next to him, and even bars on the window for those times when he just isn’t thinking clearly.

I spend my time pumping him full of medications with black box warnings, because where we are at right now, medications that are known to cause brain growth restrictions and heart arrhythmia’s are a safer alternative than allowing what is going on inside of his head, to continue. 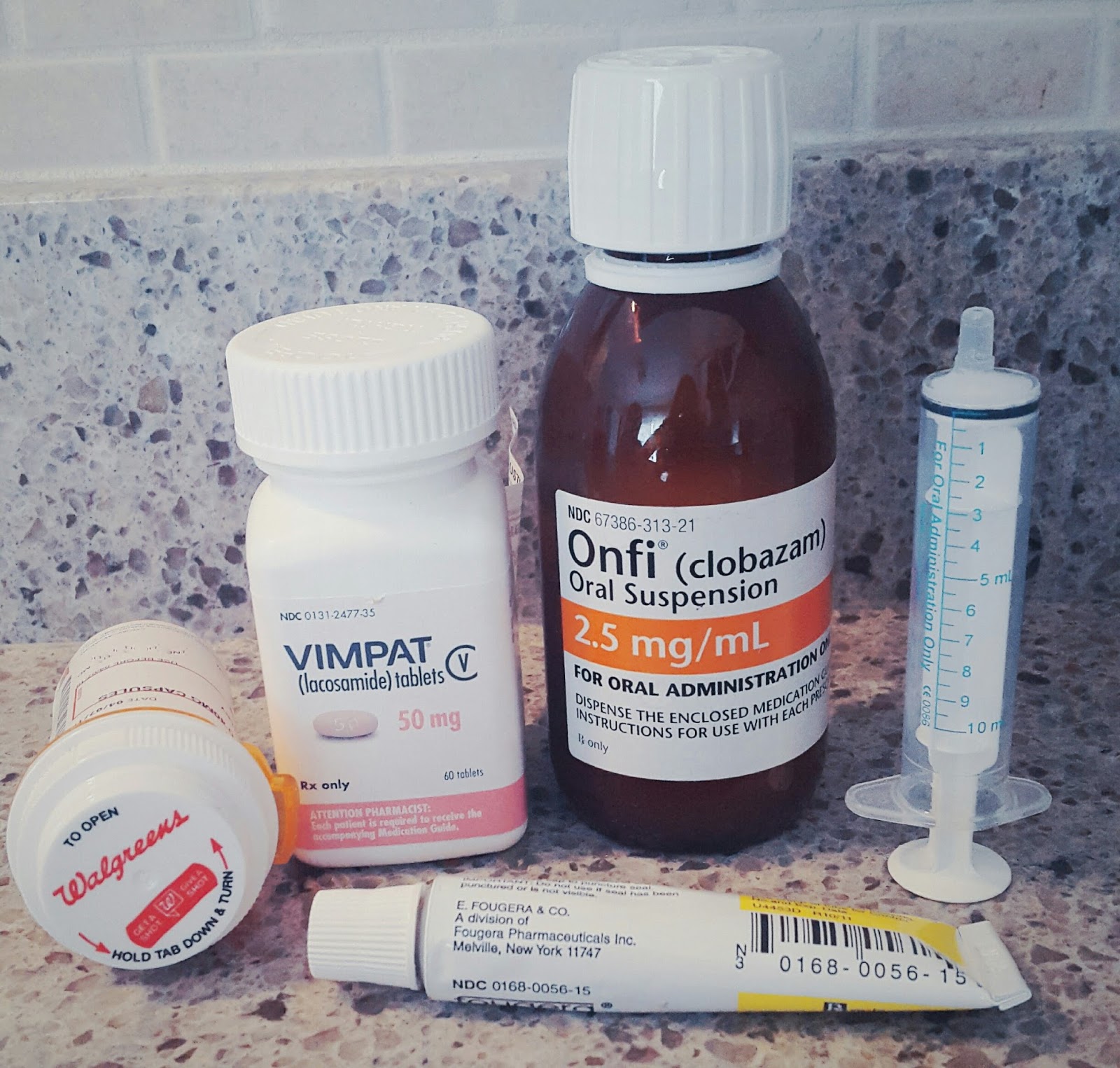 But so far, the medications haven’t stopped the seizures.

Several months ago The Boy Child had some intellectual testing done, and I was told “I have never in my career, had a child score so high.” But yesterday, he started his first day in the special education classroom at school. 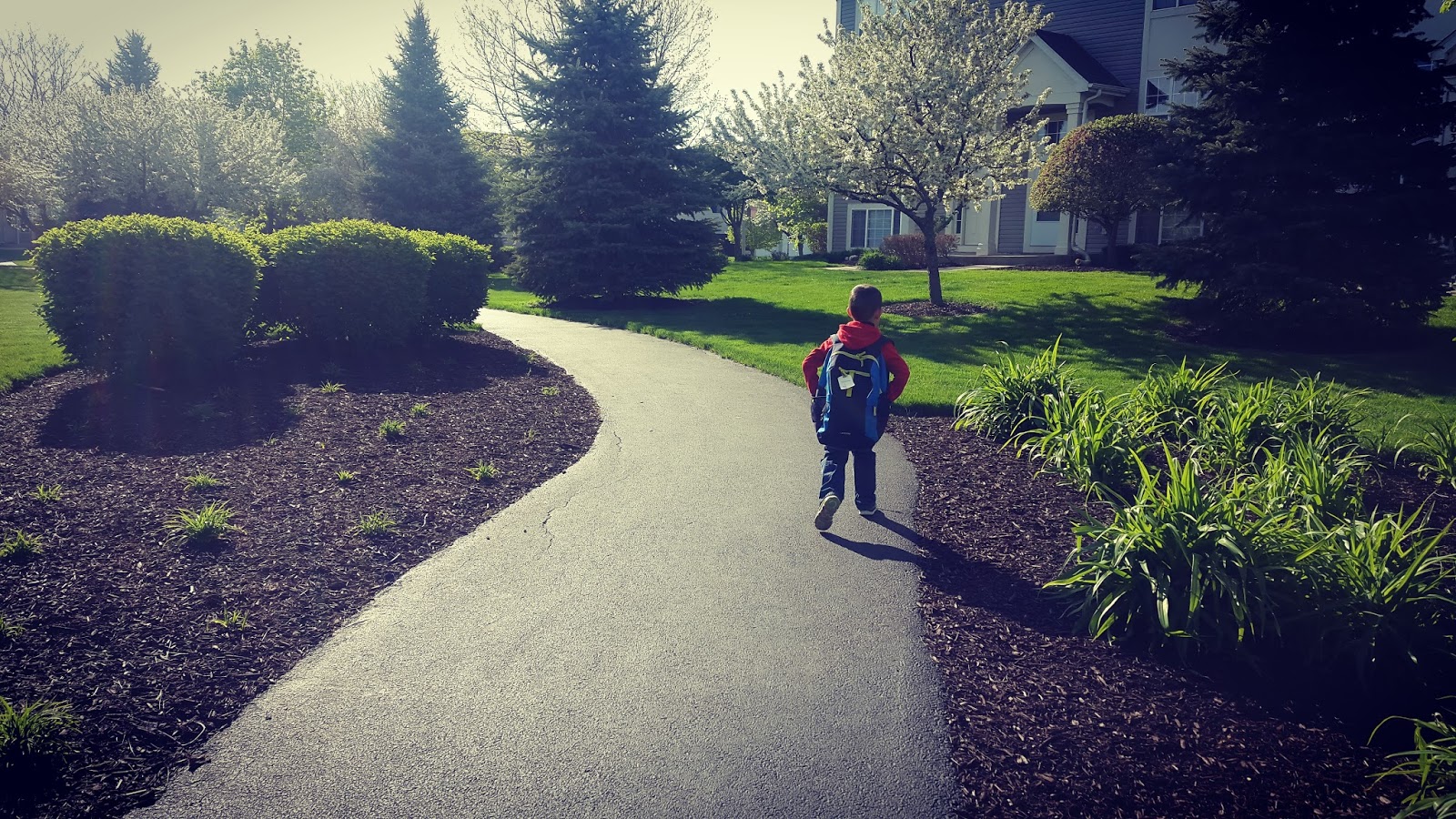 He is slipping away further and faster than I can catch him and I don’t know where he is anymore. I can’t reach him.

And so I didn’t want to come back here, back to this blog, because I wasn’t sure what to say to you all. I couldn’t pretend that everything would be OK, when it didn’t feel like the truth. I couldn’t stand by my own advice and the words that I’ve asked all of you to live by — telling you to just keep moving and it will all work out — when I was suddenly doubting it myself.

I’ve stood on this stage night after night
Reminding the broken it’ll be alright
But right now, oh right now I just can’t
On Easter weekend, The Guy and I used a gift card that we had been given for our wedding, to take the kids to the Kalahari Resort in Wisconsin Dells.

We really just needed a break.

But, while we were there, I got very sick and ended up in the hospital. When I was feeling better, right before I was discharged, I looked down at my arm and the IV waiting to be removed, sitting just above my Kalahari wristband, and the visual image of irony punched me in the face. 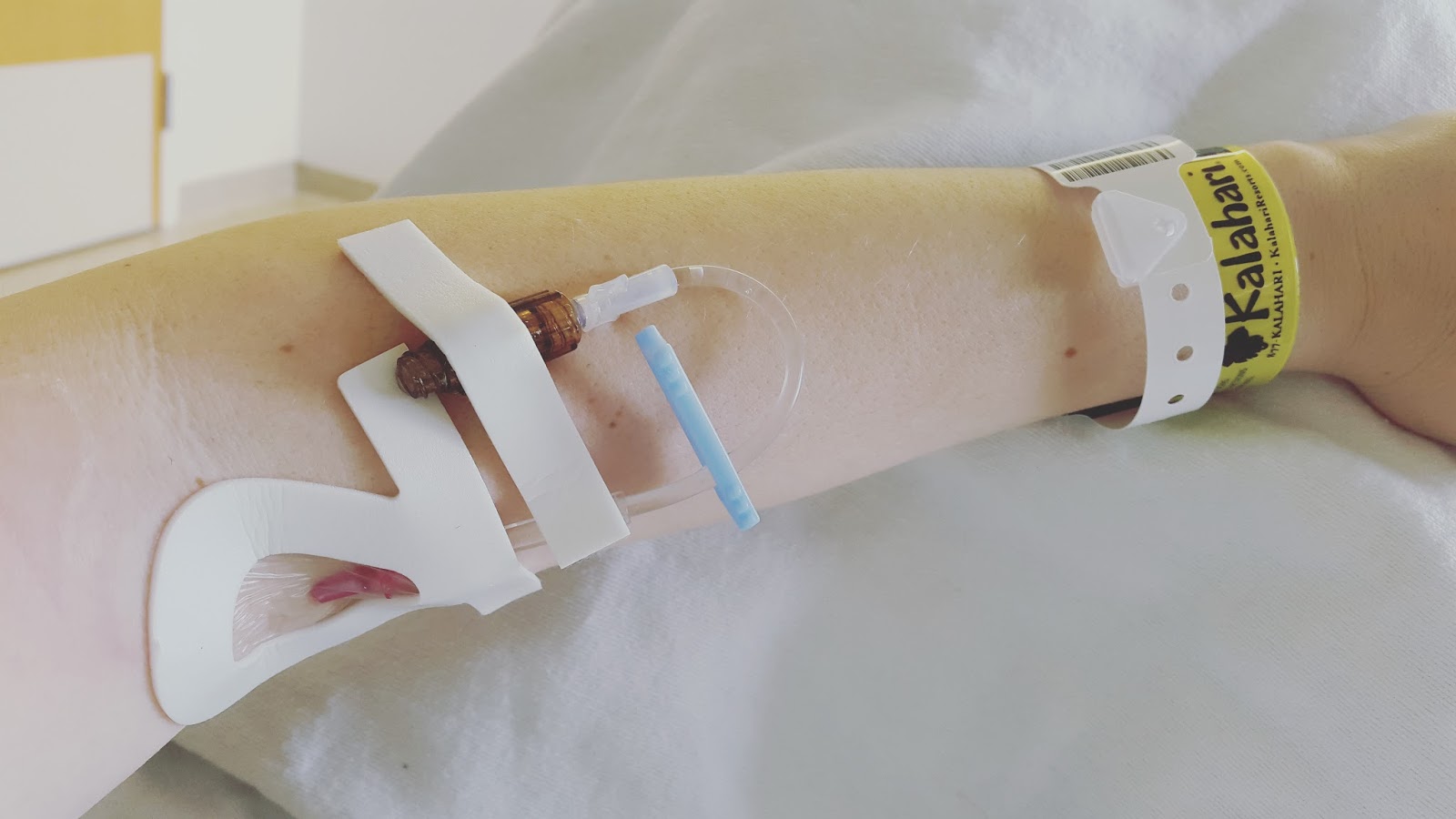 We were trying to make the best of things, and it didn’t work out. I’d been trying my whole life to get to the “good place,” and just when I thought I was there, I got smacked in the face again.

It’s easy to sing
When there’s nothing to bring me down
But what will I say
When I’m held to the flame
Like I am right now
These last few weeks have been far from fun. They’ve been filled with many hospital and doctor visits, including an EGG that burned The Boy Child’s head so badly, that he now has what may be a permanent bald spot on the top of his head. 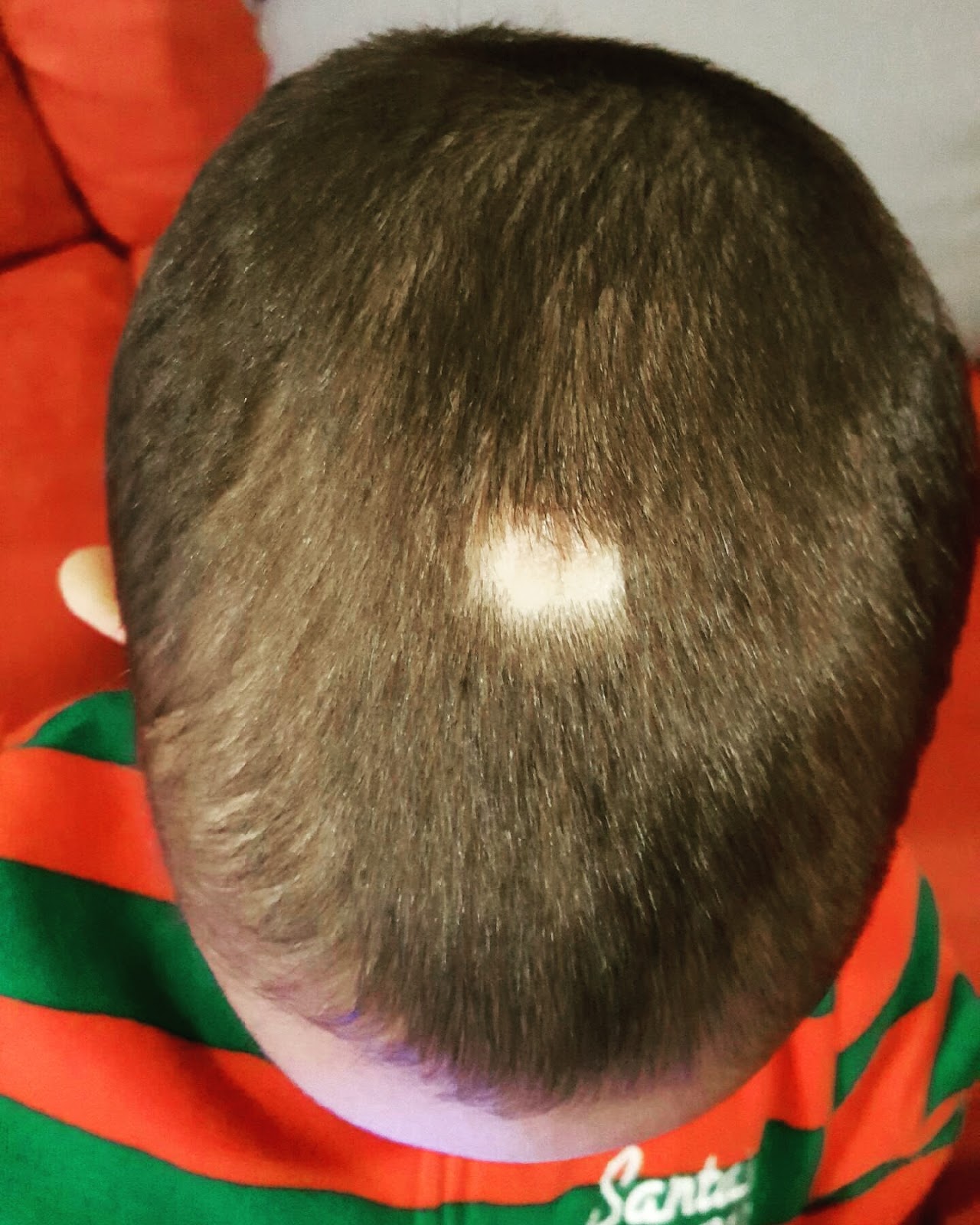 I’ve spent a lot of my days coming to terms with the realization that life isn’t going to be what I wanted it to be for my son, and I’ve spent my nights sitting in the darkness next to his bed, listening to him ask me why I won’t make it stop.

I know the sorrow, and I know the hurt
Would all go away if You’d just say the word
But I can’t help him. He clings to us and tells his daddy that he is scared, but there is nothing that he can do for him either.
We can’t save him from this. 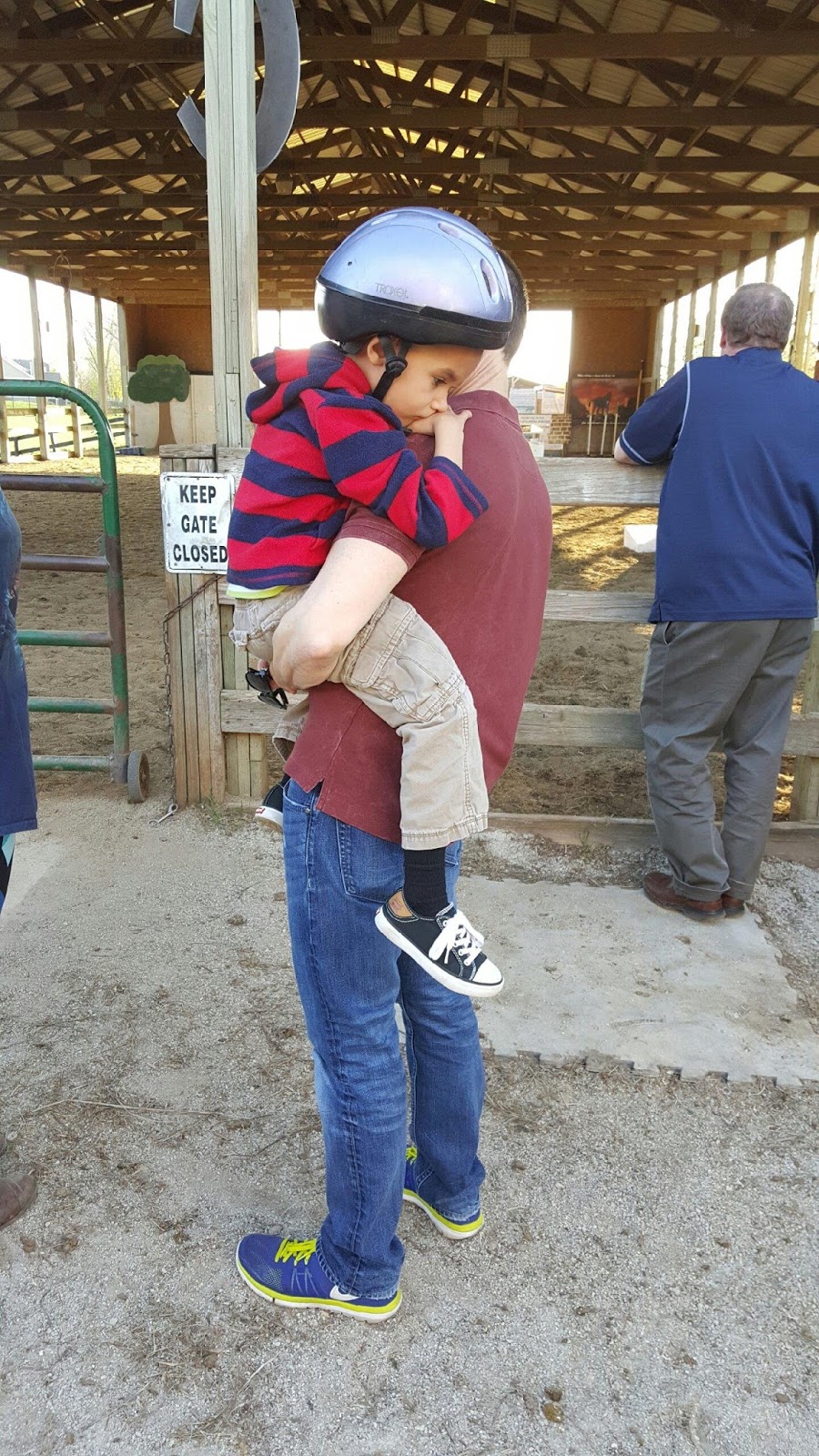 Terrified to start therapeutic horseback riding
So it’s left me thinking, if I can’t save him from this, then what can I do? I’ve been in these bad places before — the times when life engulfs you in it’s misery — and how did I get through them?
I never gave up.
I forced myself to keep putting one foot in front of the other, until my legs learned where they needed to take me. 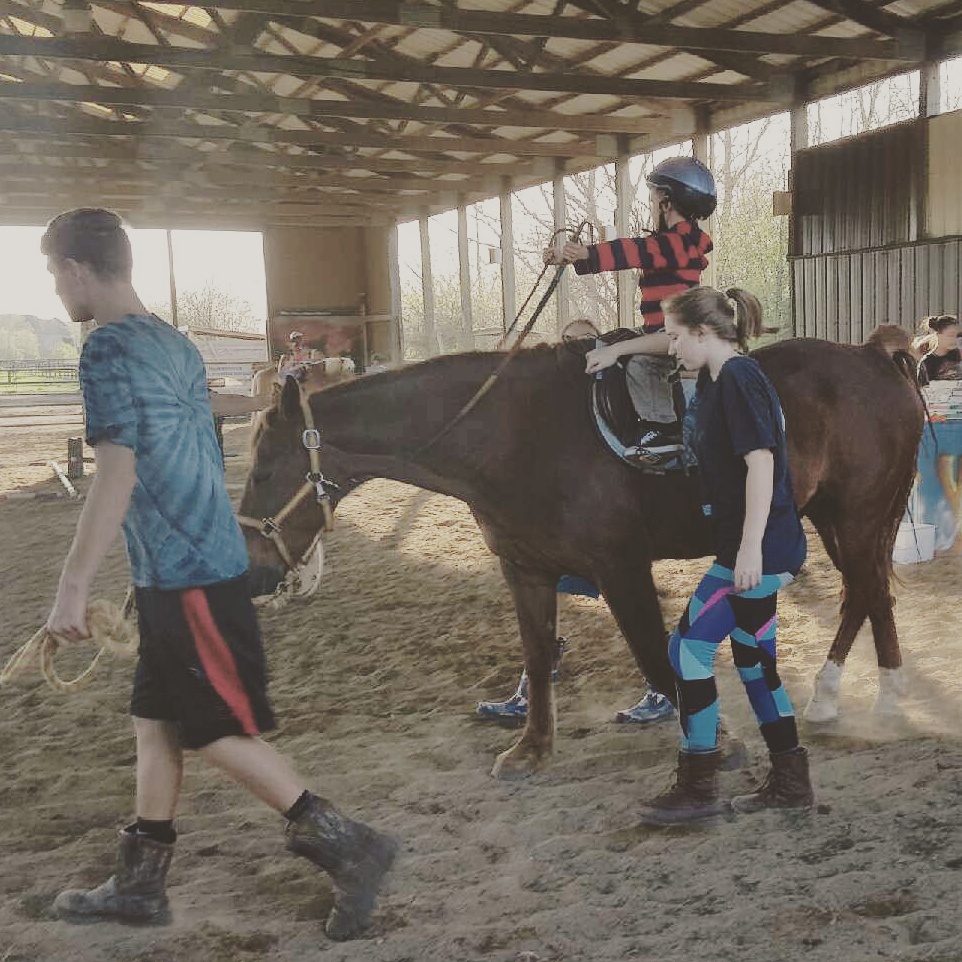 He finally did it, and he loved it
In fact, my track record for surviving shitty things is about 100%, seeing as how I’m still here.
They say it only takes a little faith
To move a mountain
Well, good thing
A little faith is all I have right now
This is my child, and if he is going to have a difficult road, then I’m going to need to learn how to navigate it.
I owe it to my son to learn how to walk this path, because he doesn’t know where to go, and is asking to hold my hand so he doesn’t get lost.
I know You’re able and I know You can
Save through the fire with Your mighty hand
Maybe my job isn’t to cure him, but rather to teach him how to survive a difficult journey.
Because I am a nonprofit founder, I often have the opportunity to share my story with people, and I joke that looking back, when I thought I was living in (abusive) hell, I know now that I was really just in training for the work that was yet to come. My nonprofit saves lives, but it’s only there, because I lived through mine.
But maybe the nonprofit wasn’t the conclusion of my story.
But God, when You choose
To leave mountains unmovable
Give me the strength to be able to sing
It is well with my soul

Maybe it was just a reminder, that I’m never supposed to give up.

***************
Upon receiving the message from his wife, Horatio rushed to be by her side in Europe. But, being that it was the 1800s, he found himself on a long boat journey, crossing the ocean, and pondering the life that he had been given.
One night, the captain came to him and told him that they were crossing the exact spot where his children had passed from this life to the next. With no wife or family to turn to in that moment, I can only imagine the despair, and desire for comfort that he must have felt when he sat down and wrote:
When peace like a river attendeth my way,
When sorrows like sea billows roll,
Whatever my lot, Thou hast taught me to say,
It is well, it is well with my soul.
And although his words went on to become one of the greatest hymns of all time, what is even more remarkable is what Horatio did with the rest of his life.
He and Anna had three more children, of which they lost one to scarlet fever. But tragedy was not destined to be their only legacy, because they chose another path.
They moved to Jerusalem, and adopted a son, who as a young child, discovered the Sialom Inscription in a tunnel. They also started the American Colony, which during World War One, saved many Christian, Jewish, and Muslim lives through orphanages, soup kitchens, and hospitals.
I won’t compare my life to their infinitely more difficult one, but their story very much resonates in my heart.
There are many times in life where I feel like I could have given up. When I looked around and thought “there is nothing to salvage here, all is lost.”
But I didn’t give up, and I have seen the good that came from pushing on.
So tonight, as I sit here in the dark watching my son and feeling like my situation is unfair, I’m reminded that we were never promised an easy life. In fact, we were never promised anything. We are given what we are given, and it’s up to us how we choose to live among it.
There is no such thing as a wasted life, unless you choose not to do anything with it.
When you find yourself in a place where you feel like your journey is unfair, remember that so far, your track record for surviving tough situations has been pretty good, and when it really comes down to it, that’s a better deal than some people get.
I didn’t want this path, but I’m here, so while I am, I’m going to see were I can take it.
I’m going to make the journey beautiful for my son, even if that’s all I can do. 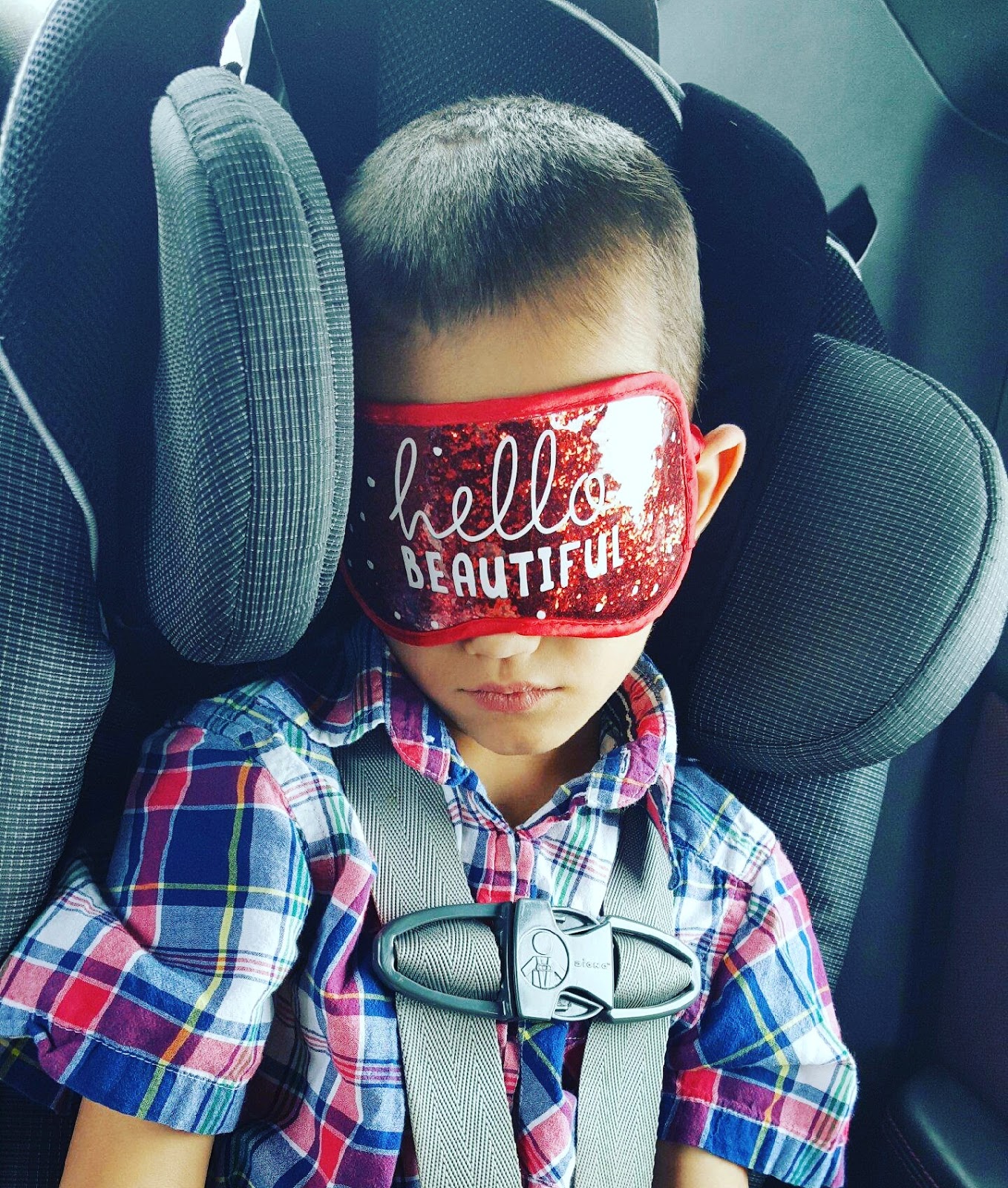 It Is Well With My Soul
Tags: Health, Lessons, Struggles
Newer Posts

This Is How We Roll…