It’s been a while since I’ve let you all into the craziness that is my life with my particular two children, and I have to admit, I am still laughing at some of the things they’ve said this week. And since I’ve never been one to hold back the parts of me that make me look bad, I figured why the hell not share some of this with you, even though yea, it probably doesn’t make me look the best.

Therefore I bring you, the next installment of “Conversations I Didn’t Think I’d Be Having This Week: Kid Edition.” 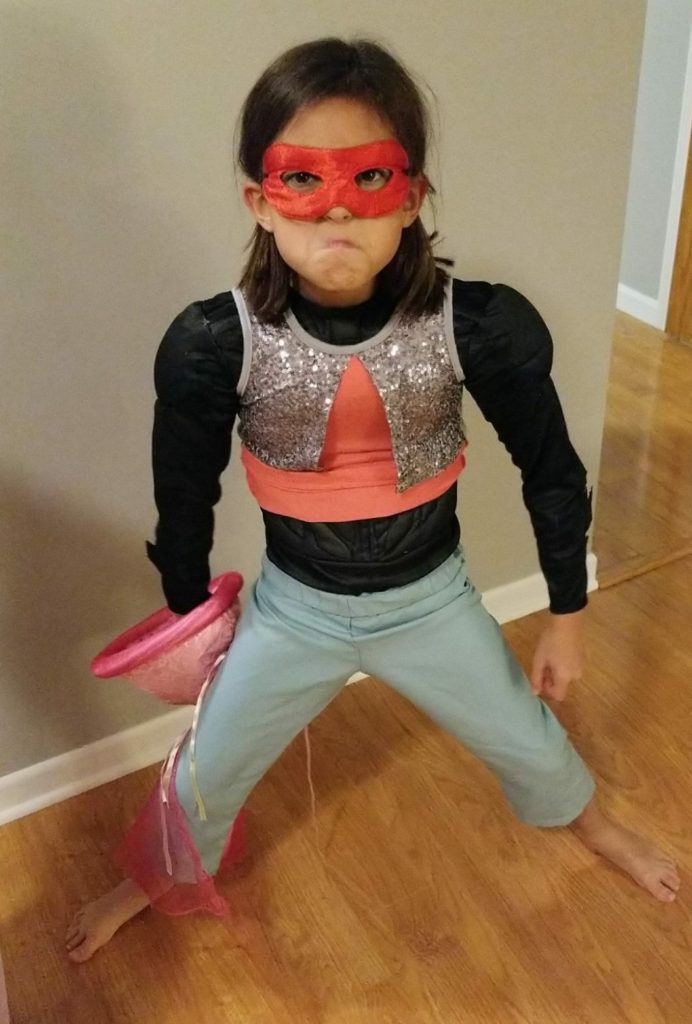 I went out with a friend the other night, and this is what The Guy sent me while I was gone. Looks like they had fun!

We are driving down the street, when The Boy Child excitedly yells out to everyone else in the car, “Look! A uniboat!”

Not having any idea what a uniboat is, I turn to my left, and see hanging in the window of a sporting goods store, a kayak; you know, a boat for one person.

In other words, a uniboat. 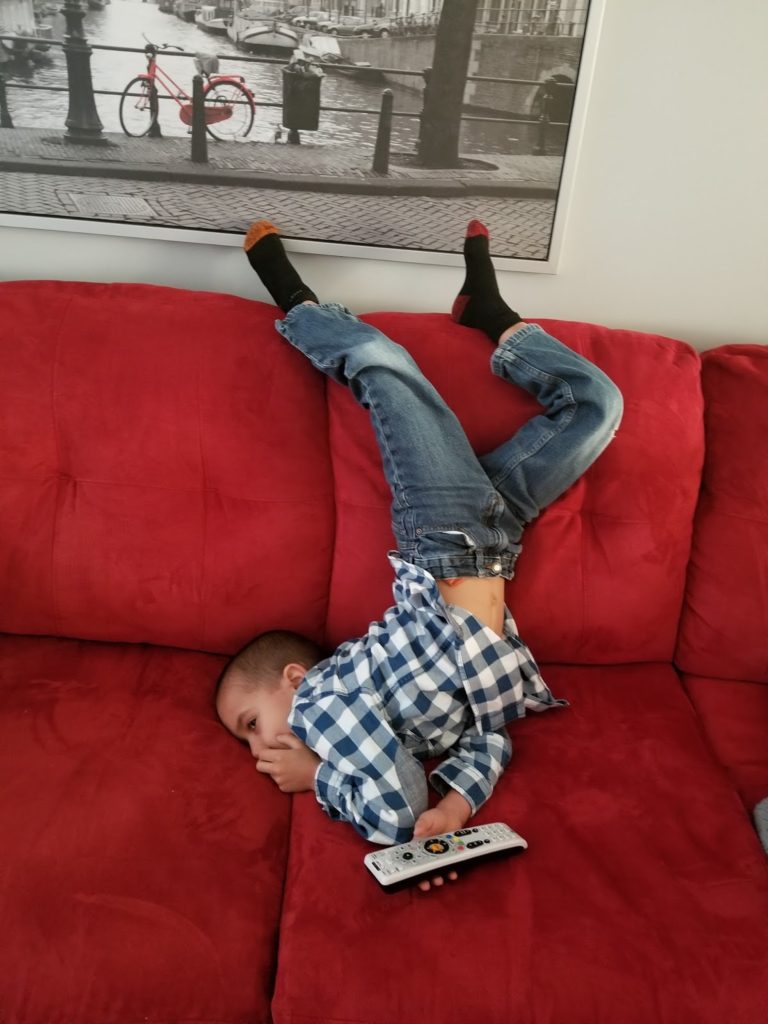 Found him watching TV like this. Yep, seems normal.

A neighbor alerted me that there was a large, sketchy looking dog, wandering around near my garage door. Needing to get the kids to school, and having parked the car on the driveway, I instructed them to wait for me to call the all-clear, and then get in the car quickly.

After surveying the situation and seeing no dog, I told everyone to run to the car as fast as they could, and hop in. When I felt fairly confident that they both understood the plan, I yelled “run!” (like a psycho) and we all took off, and jumped into the car.

Well, almost everyone did that.

Breathing a sigh of relief as I settled in behind my steering wheel, I looked through the windshield to see The Boy Child wandering aimlessly around, in front of the car.

Freaking out, and yanking him into the car with us, I asked him “what are you doing!? Do you want to be attacked by a dog?”

“I’m fine” he insisted, “I would just jump in front of him and say ‘Hey dog! I’m a dangerous man with some money in my pocket HOLD UP!”

Oh good. So you may be eaten by a dog, but at least Bruno Mars would be proud that you went down in style. 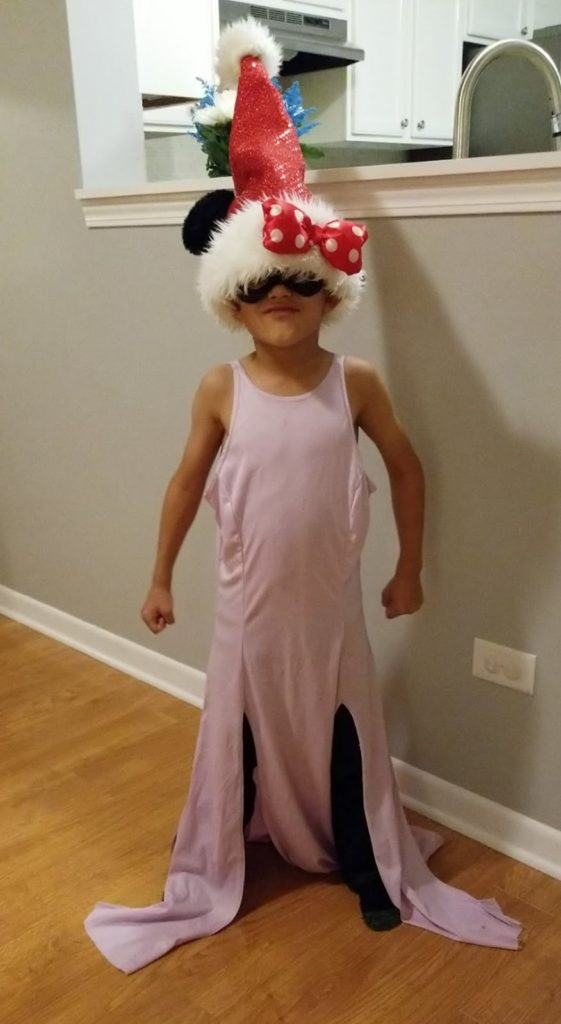 Also from my night out with a friend…

The Boy Child has an aide with him at school during the day, because of his special needs. Since I wasn’t really sure what the protocol is for telling a six-year-old that he needs more help than many of the other children, I figured that I would just figure it out as the questions arose, and didn’t go out of my way to have any explanatory discussions with him ahead of time.

And that worked out just fine, for a long time.

That is, until we were sitting at dinner, and it became clear that the wheels were beginning to churn in his head. Finally, talking about the aide that is with him in class, he said “mom, do you know what? I don’t think Ms. ‘Smith’ has any friends at school, because she is always following me around and wanting to sit with me. But you told me to be a good friend, so I’m being nice to her.”

Gosh darn I love it when parenting just takes over for me.

Great job kid, keep on being a good friend! 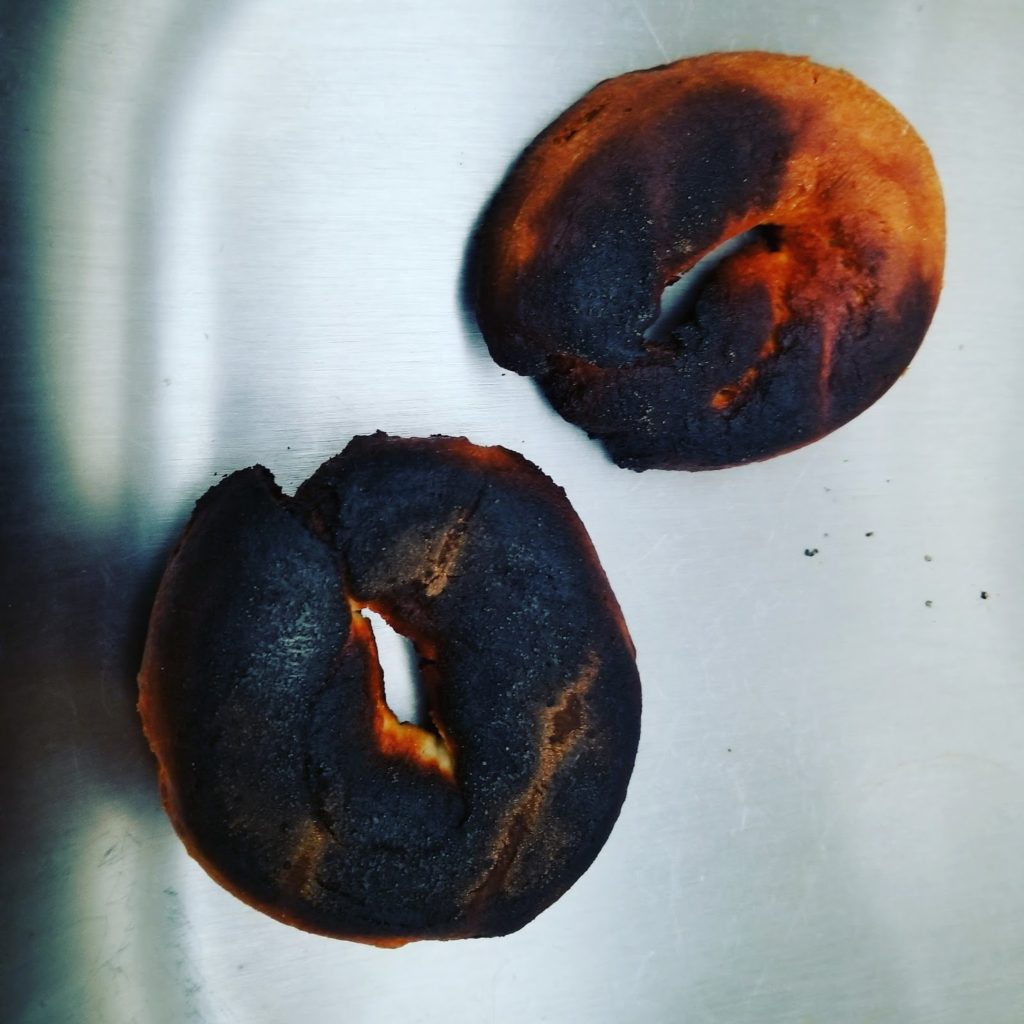 This is an older picture, but it sill makes me laugh every time I come across it. Does anyone want me to make them a bagel? I make them a special flavor of crunchy.

After a particularly frustrating morning with the kids, I came down the stairs to see some kind of disgusting substance all over the wood floors. Upon closer inspection, I called The Boy Child into the room.

“Why are there chewed up and spit out almonds all over my floor?”

“Well,” The Boy Child said slowly. “I was eating in the living room when I remembered that you told me not to eat outside of the kitchen, so I stopped eating, and spit them out on the floor.”

Looking around, and trying to be patient with his lack of cognitive development, I then asked “OK, so why are they on my walls?”

“I was trying to rub them into the floor with my shoes, to hide them you know, but then they got on my shoes so I was cleaning my shoes off,” he stated, as if any of that that made sense.

“You were cleaning your shoes off on my walls?” I asked.

And this is why Ms. ‘Smith’ assists wants to be friends with my kid at school. 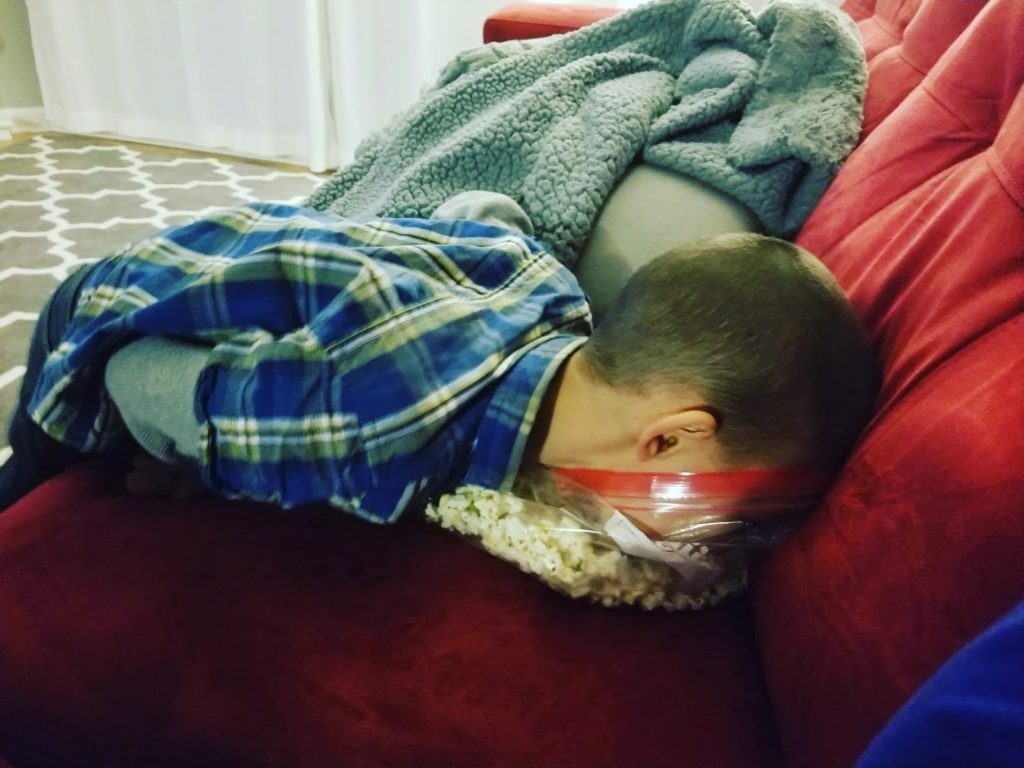 I was sitting on the couch, and turned to see him eating popcorn like this. Yep.
Friday:

Speaking of dogs, The Guy and I were taking a walk with the kids, when we passed a man walking a very large dog. Or, as The Boy Child LOUDLY pointed out, “look at that big ass dog!” 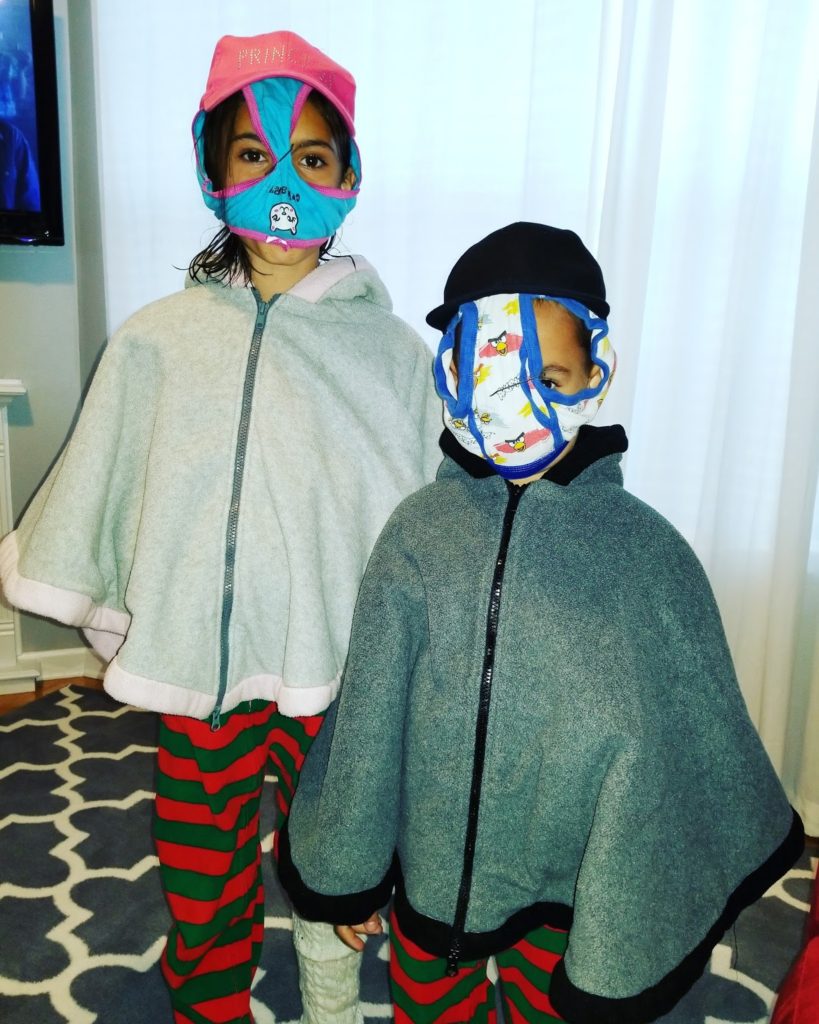 Fell asleep on the couch, woke up to this.

I was dusting The Girl Child’s room, and feeling like I needed a little bit of acknowledgement for my hard work, I said to her “you are so lucky that you have me as a mom.”

When she asked “why,” (AS IF IT WASN’T OBVIOUS), I pointed out how funny I am, how cool I am, how much fun I am, and then she replied with “Huh. I just kind of think of you like my maid.”

In other news, guess who started a new chore chart? 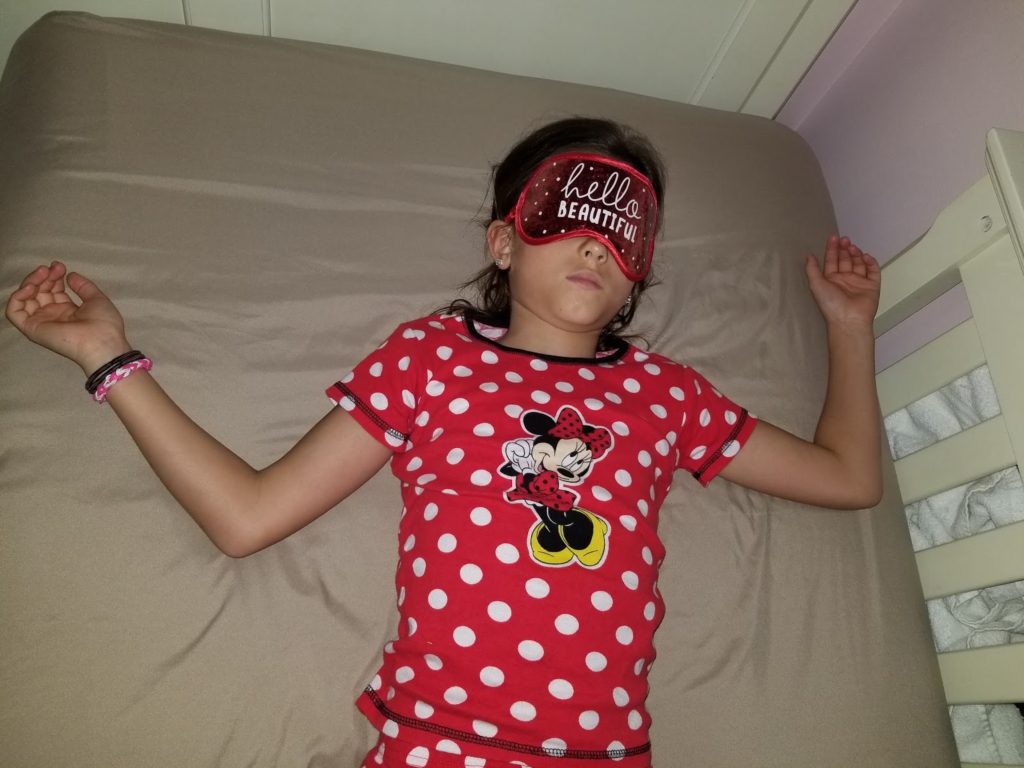 This is legit how she sleeps.

After The Girl Child finished putting away a load of laundry, she turned to me and said “I tried to sleep in late, but instead I washed dishes, and I put away laundry. I’m turning into you!”

Guess that chore chart is working. 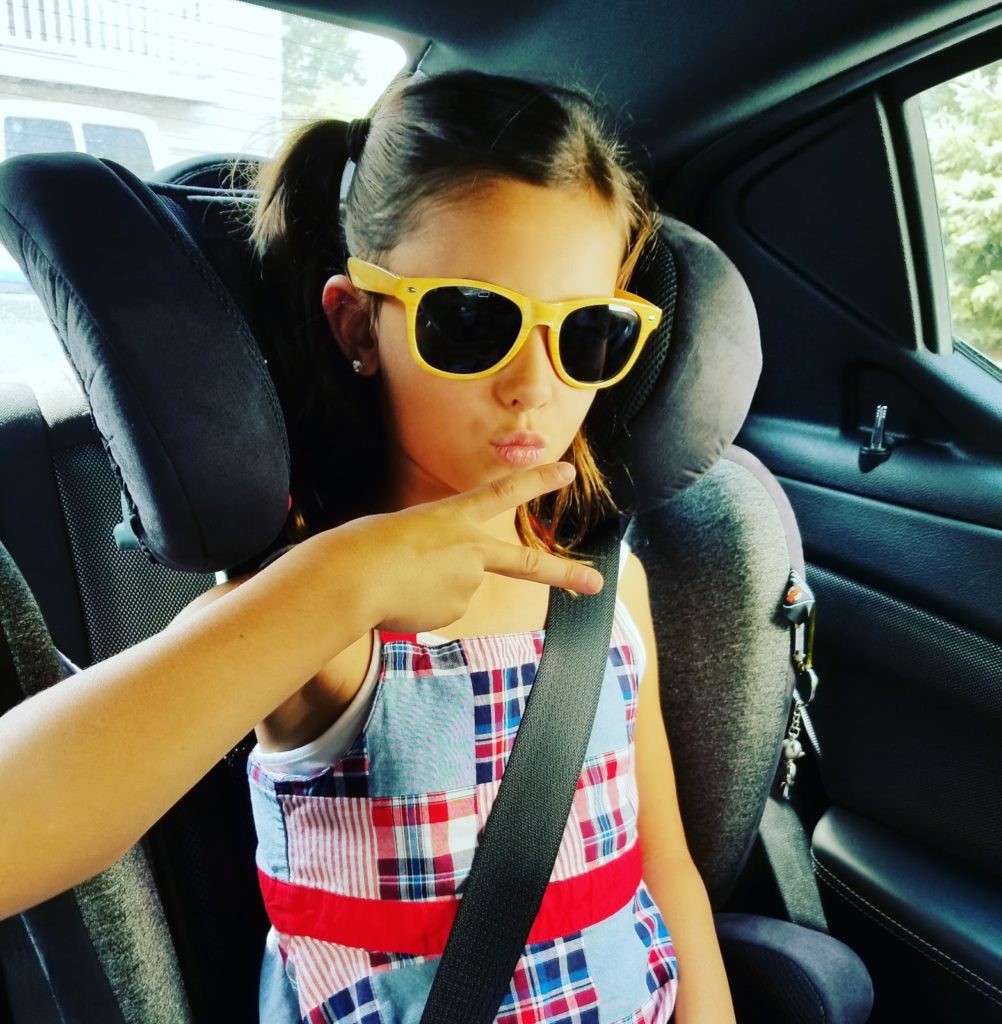 And bonus, I’m at that point in pregnancy where none of my clothes fit (not even the maternity ones!), but I refuse to buy anything else because I am convinced that this baby is going to be born any day. But, that doesn’t stop me from complaining about how I have nothing to wear, which is why I was feeling pretty snazzy the other day when I found an outfit that didn’t appear to look half bad. 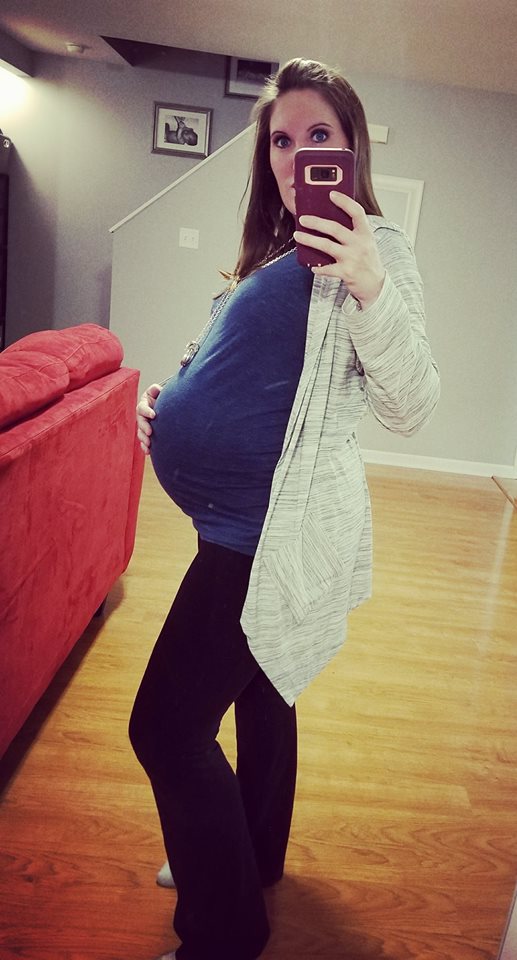 That is until The Girl Child walked into my room, looked me up and down, and innocently asked “Um, do you want me to help you pick out something that looks good?”

So if you happen to see me in my ugly, misfit clothes, don’t worry.

I’m fully aware that there is a problem.

Tags: Conversations I Did Not Think I Would Be Having, Kids
Newer Posts

An After Flood, House Renovation Tour