“Things That Make You Ask Why?” 13th Edition

On this blog, we discuss some really difficult things, that can make you question the way the world works. But we aren’t here for that today. Nope, today is all about the strange shit that seems to serve zero purpose at all.
The shit that just makes you ask “why?”
**************
Why hasn’t this house been rented yet!? I saw the listing on a Facebook ad, and I simply can’t understand why someone hasn’t snatched it up yet. 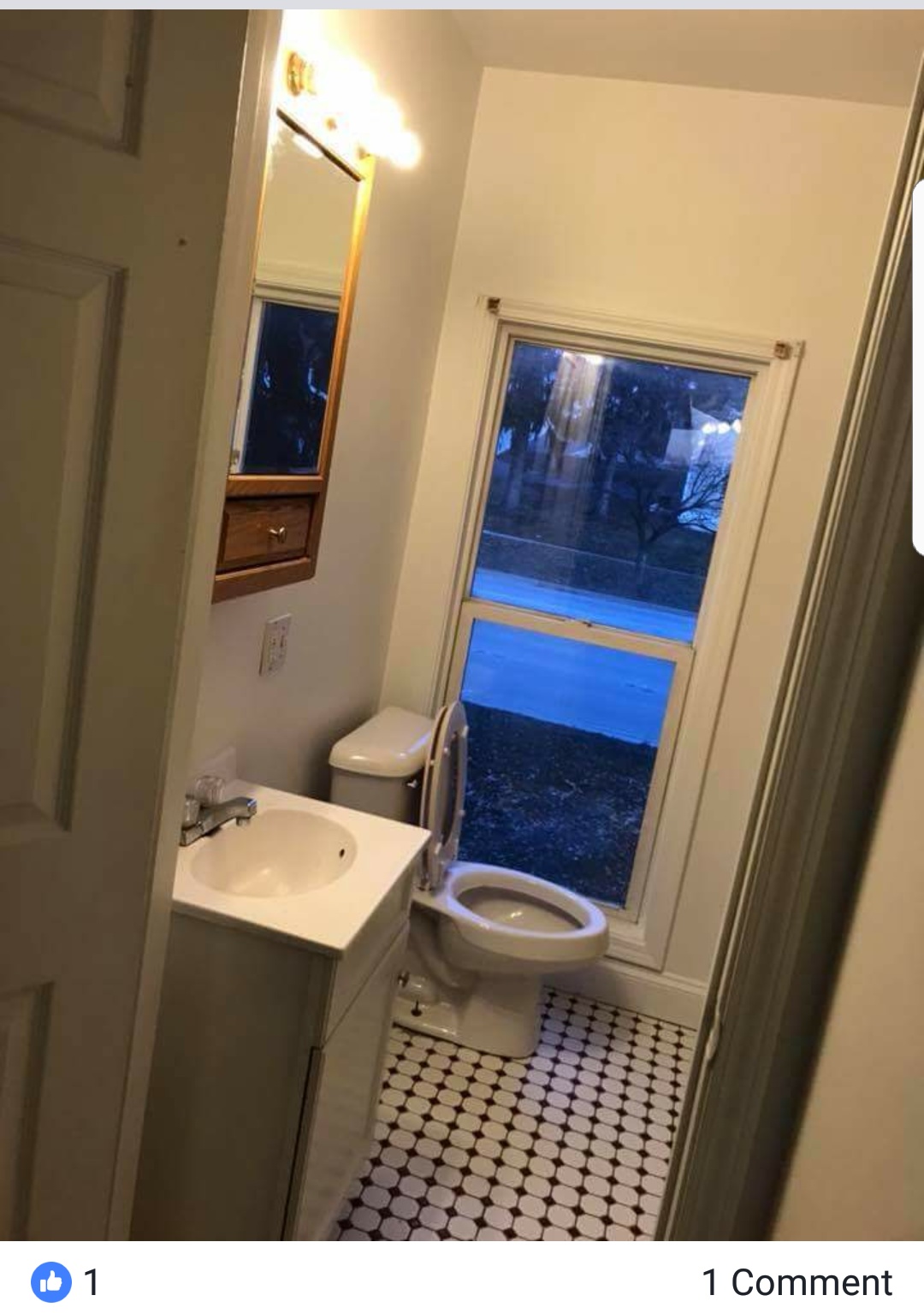 Do you think it’s because the bathroom is tiny? I mean at least it gets great light, and views, of the street… from the toilet…

I simply have no idea why it’s still for rent. 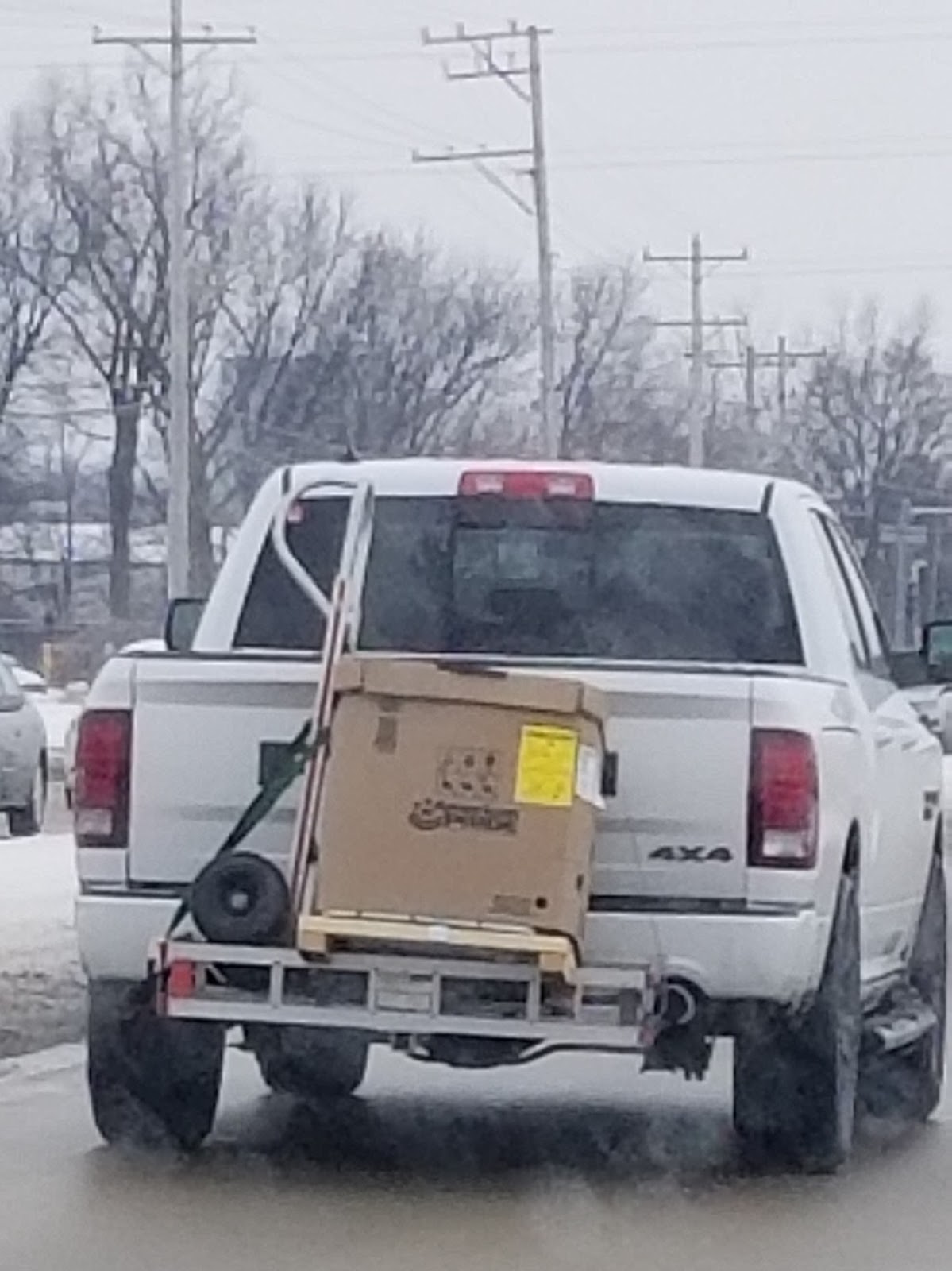 This air conditioner is so new, that it still has not only the palate, but also the dolly, attached to it. Which is all attached to the back of the truck.
Well OK then.
***************
This next little tidbit, was an ad that I saw someone place in a local Facebook group. If you’re viewing this on a phone, the following screenshot might appear fuzzy (for some reason the screenshots are always especially fuzzy in mobile view), so let me type it out for you; in exactly the same spelling and wording as the original ad:
i have a proposition for the right person.
Ok so do to being lied to by gurl (hard to believe right) my lisense is getting suspended for 3 months cuz she never paid tickets I gave her $ for so starting March 6 2018- June 2018 n Idw keep gettin in trouble n go to jail n lose my job I’m a union laborer for D construction n lose where ever I’m staying atm anywho I’m lookin for sum1 who’s not working disabled, retired, lazy idc who needs a car I will buy u a car put title n insurance in ur name 100% cover all gas used n maintain vehicle while u drive me to n from work every single day rain shine shit hunover NOT 1 single day missed n on June6 the car is urs free n clear or if u got a car I’ll jus pay u out the ass to chauffeur me either way I was kinda holding to do sum1 a solid help out a single ma or sum either way lmk
Then at the bottom of the ad, there’s a rather terrifying picture of a clown, with blood coming out of the mouth. 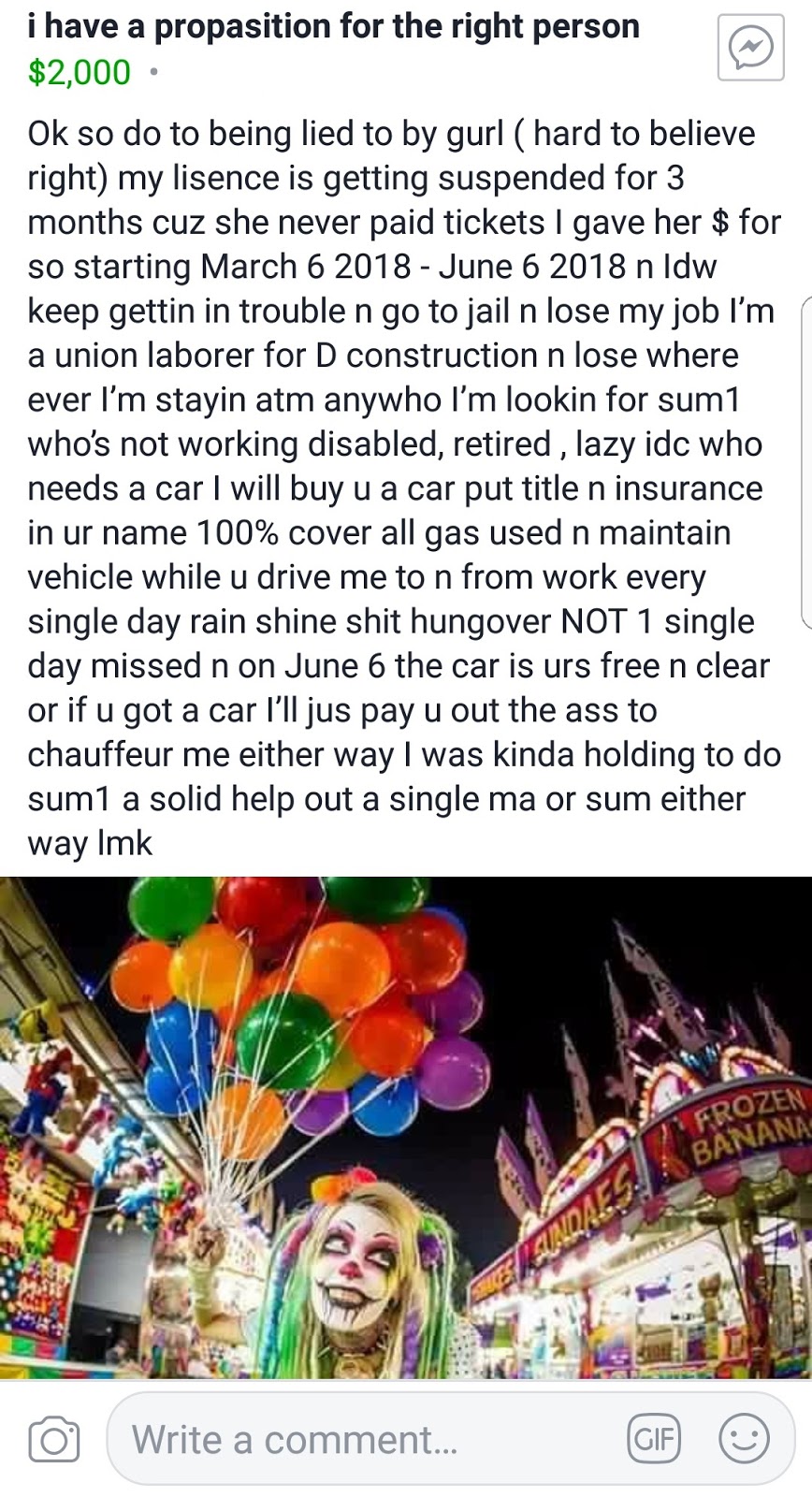 So my question is, why do you think this dude can’t find a single person who wants to be in close proximity to him, in a vehicle, on his way to work?
Poor guy. Position is still available if anyone is interested.
****************
Why did I join the YMCA instead of joining this gym!? 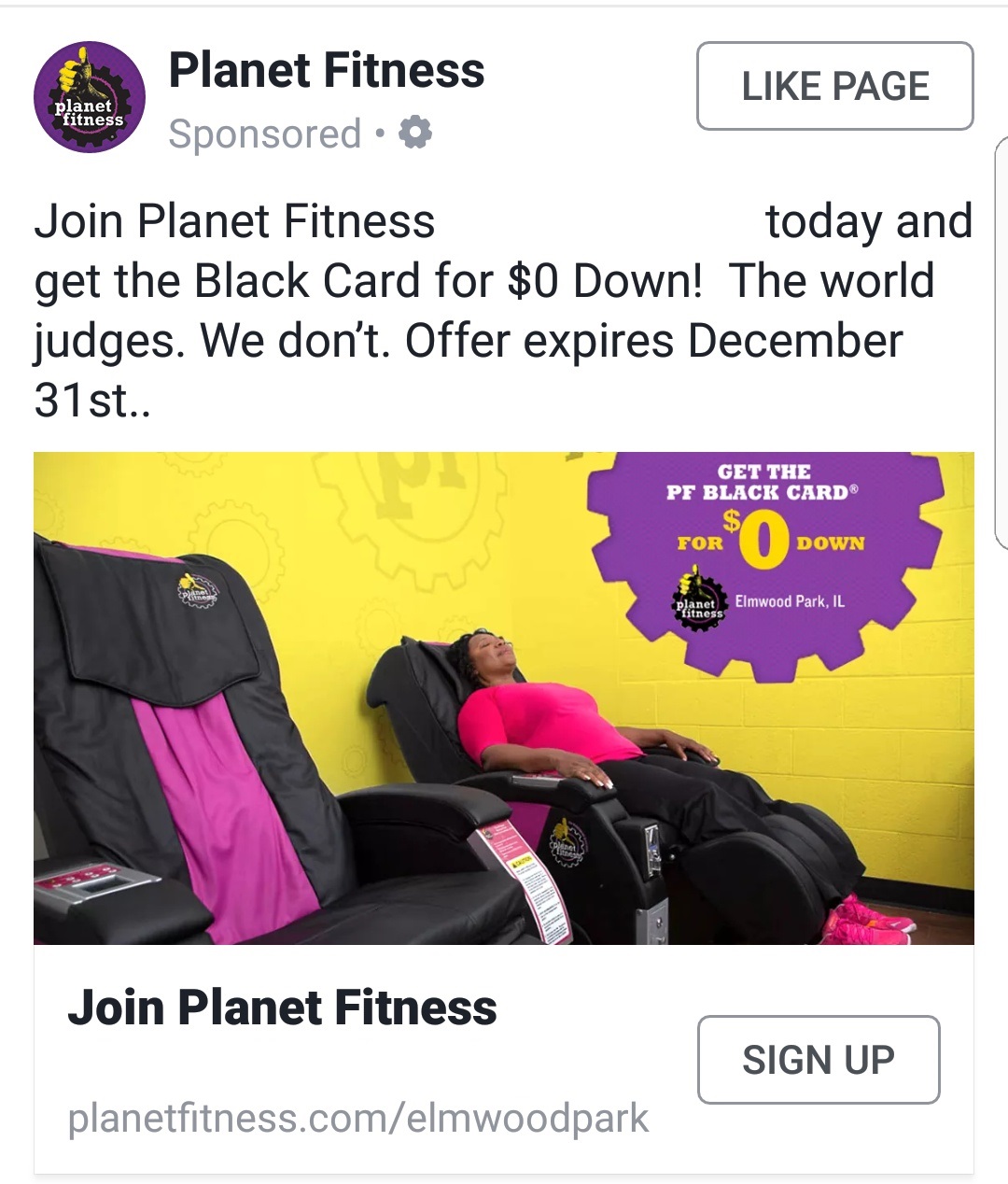 No seriously, that was a real question. If that’s how you “work out” at that gym, count me in!
Hey, this isn’t even near me, so I’m not sure why it was showing up on my Facebook feed, but, if what the ad states is true, and “the world judges, we don’t,” then I might join just so I can bring a cupcake, hop into that massage chair, and “work out” with everyone else.
I’ve been meaning to relax more. I mean, workout.
Anyone want to see if we can get a group rate??
**************
Why am I confused? 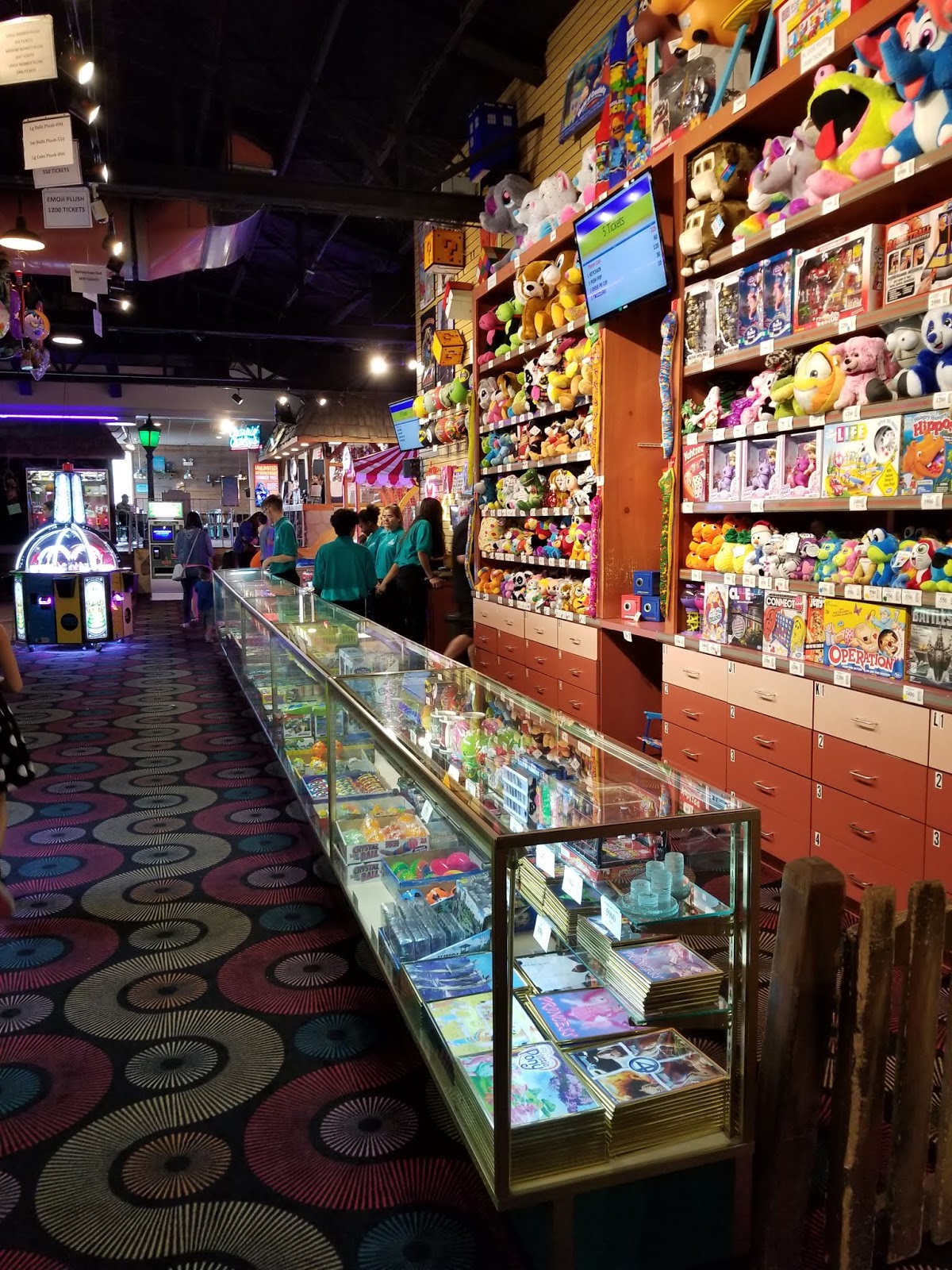 Because I thought that I had taken the kids to a children’s arcade, but apparently I was wrong. This very clearly, is either a senior citizen gambling center and the air hockey game is just a cover up, or the target audience is children who would like to buy their parent’s Christmas gifts, by way of Skiball tickets, because these are the prizes that you can trade your tickets in for: 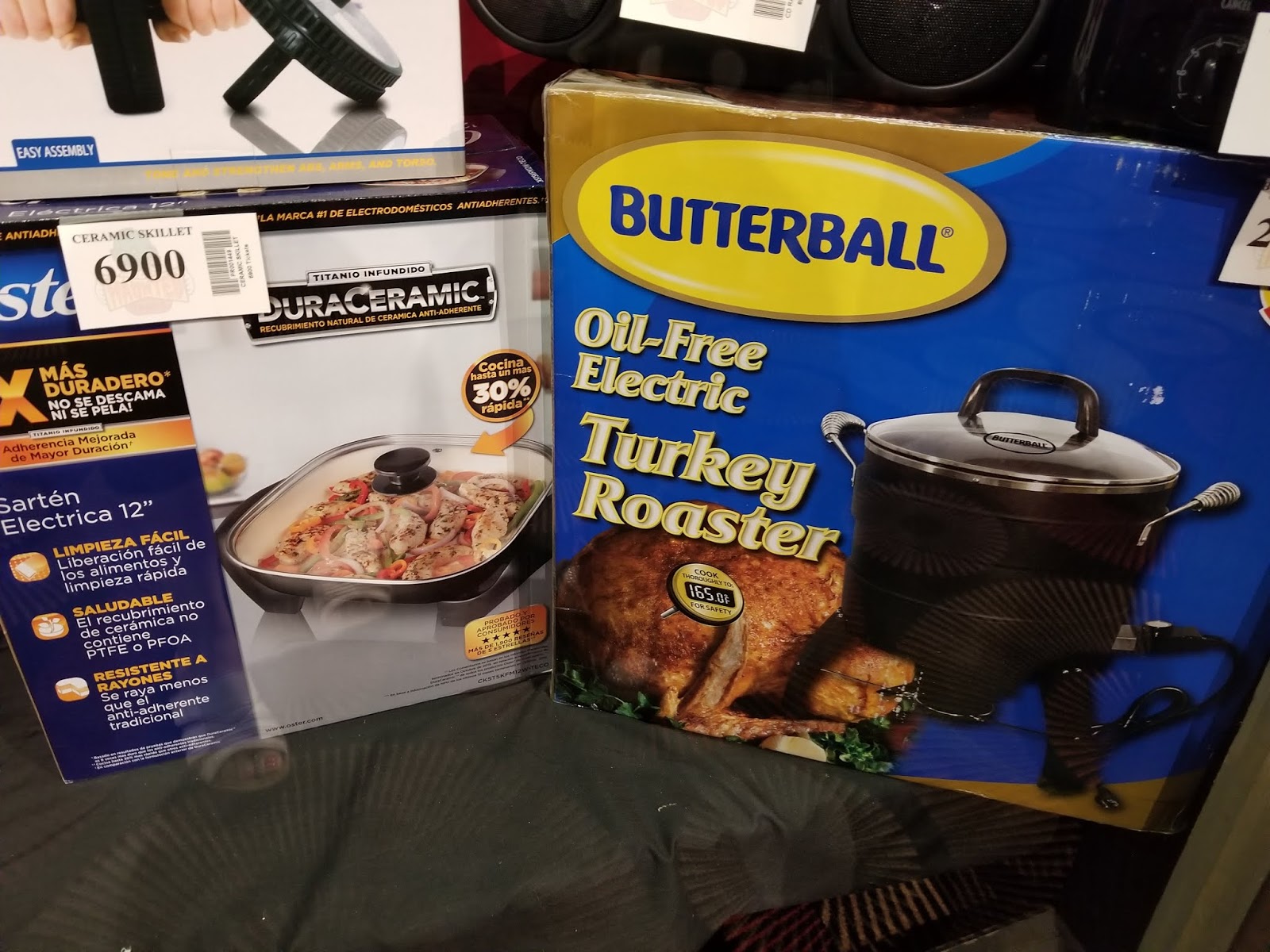 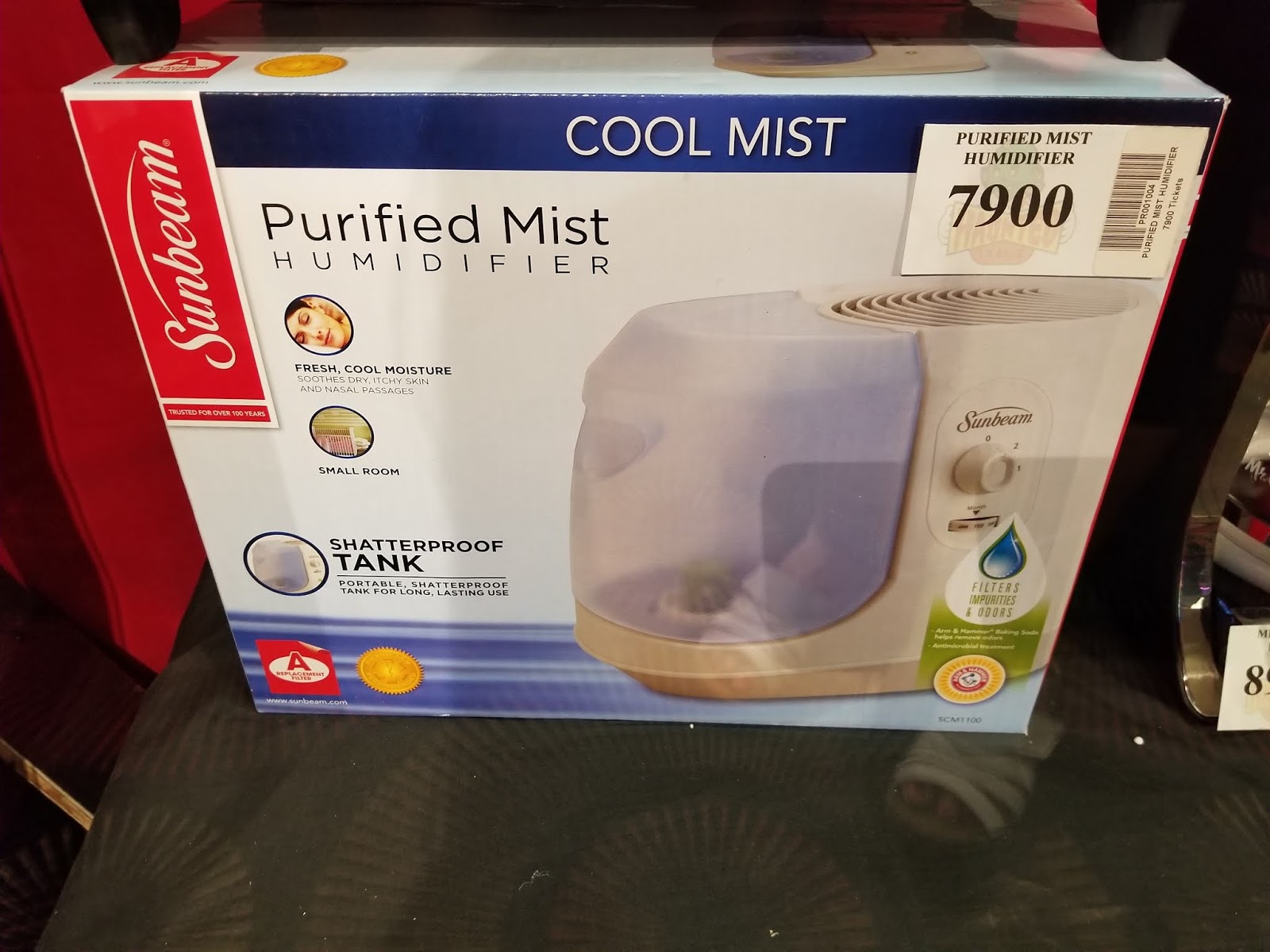 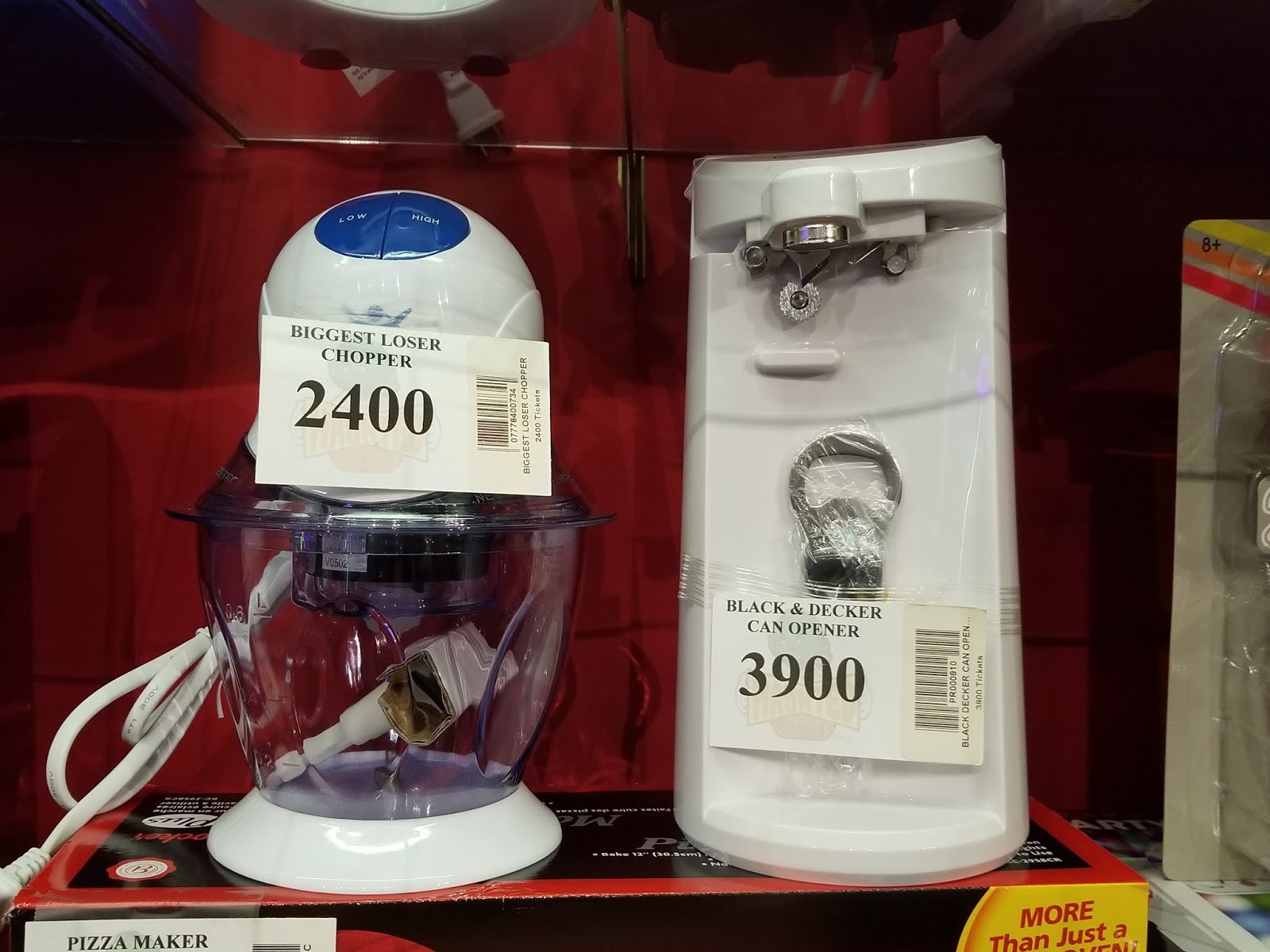 “Hey kids, want to win a humidifier? No? How about a Turkey Roaster? Can opener? No? Oh well, don’t worry, it’s probably impossible to win enough tickets for these awesome prizes anyway. Why do I know this? Because I have a feeling they haven’t had to restock the shelves since 1993.” 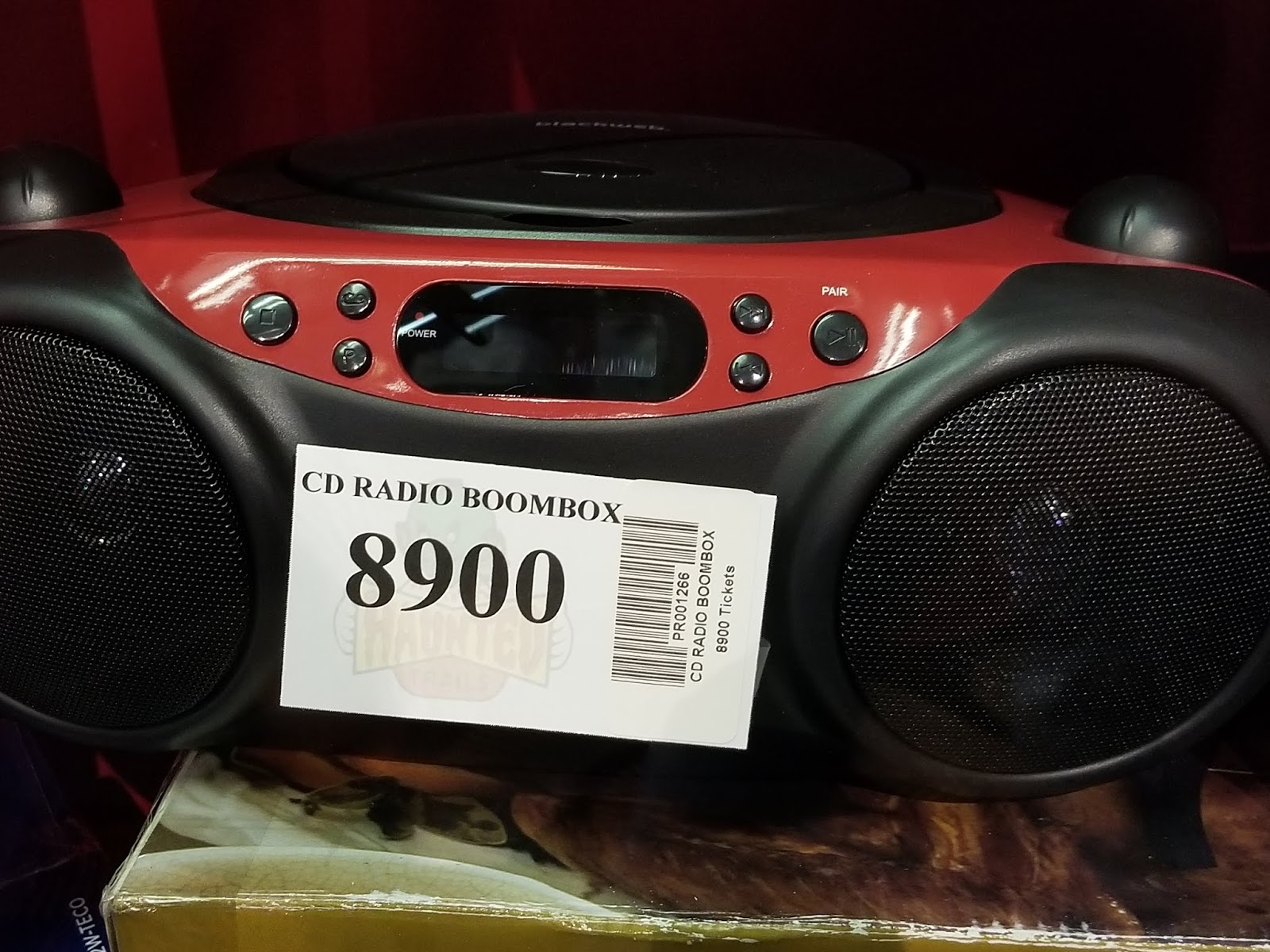 Why am I taking a zoomed in photo of a man in a parking lot?
Because I was so stunned that a man wearing a red suit, with snowmen all over it, had come up to me in a parking lot and asked if I wanted a free bag of makeup, that I hadn’t thought to take a picture while he was closer. 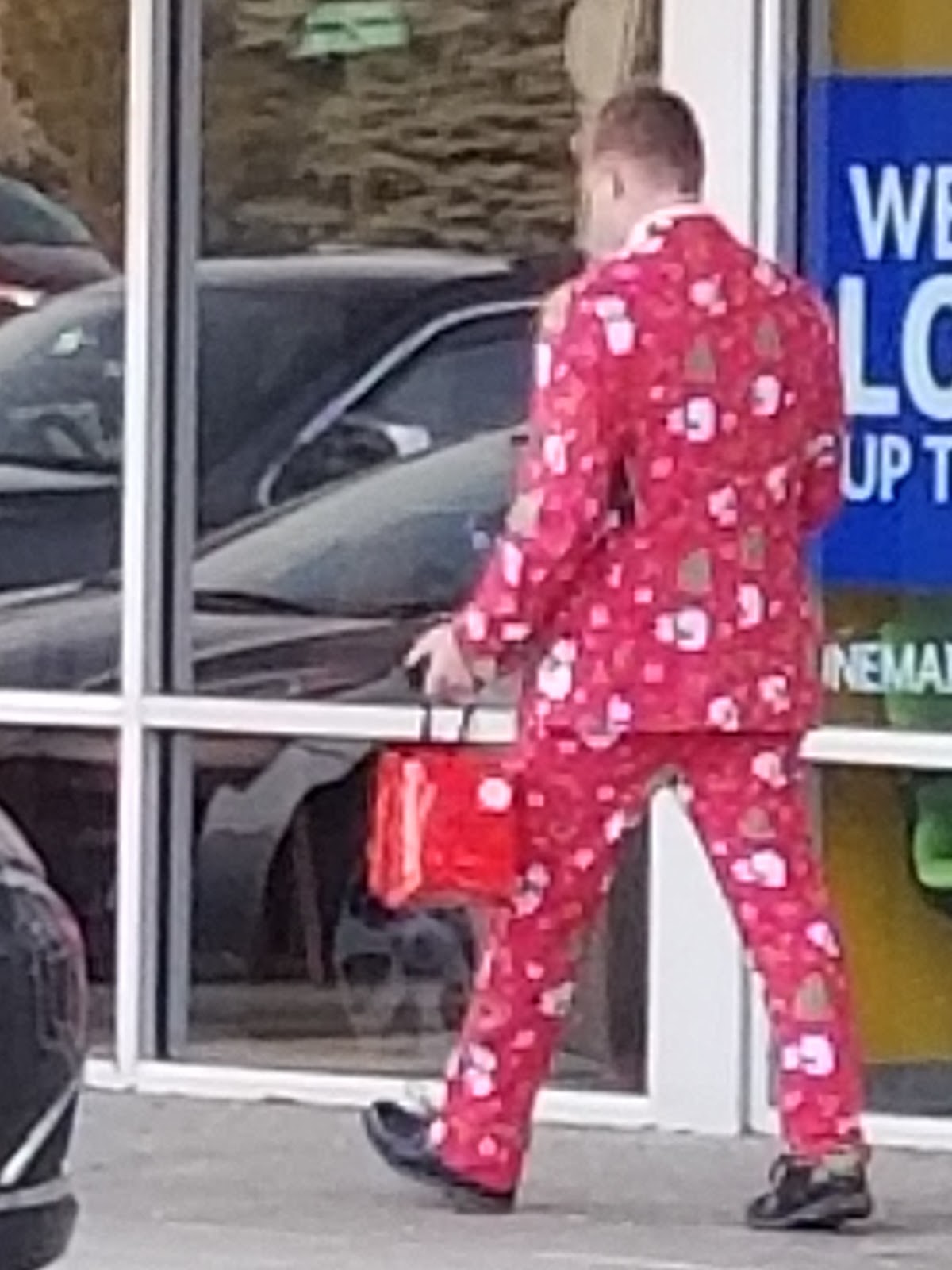 No, sorry, I don’t want any free makeup. I make it a point to not take things from strangers men wearing snowman suits in parking lots. 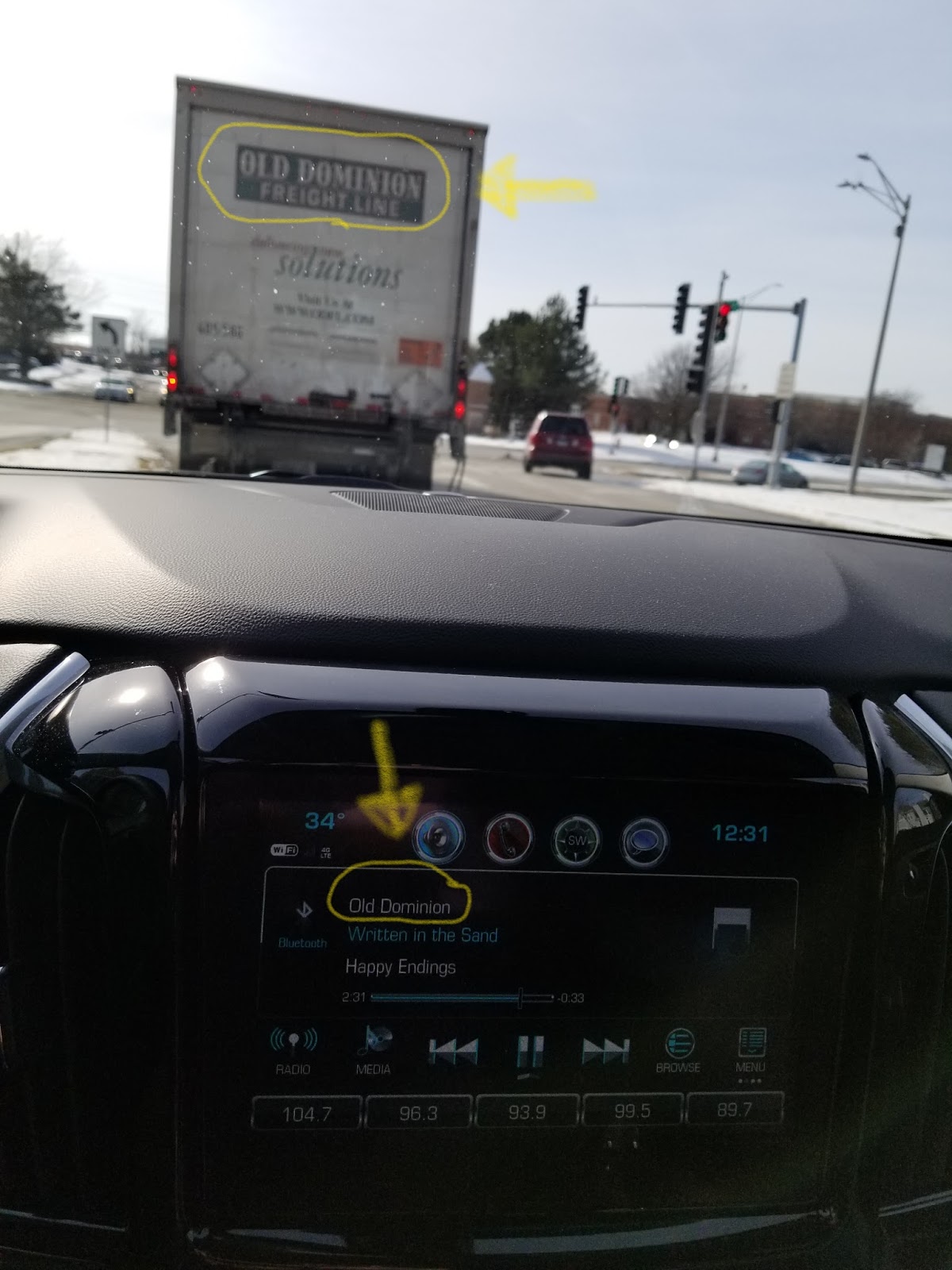 Because I got really excited that I pulled up behind a truck that said “Old Dominion,” while listening to… you guessed it, Old Dominion! 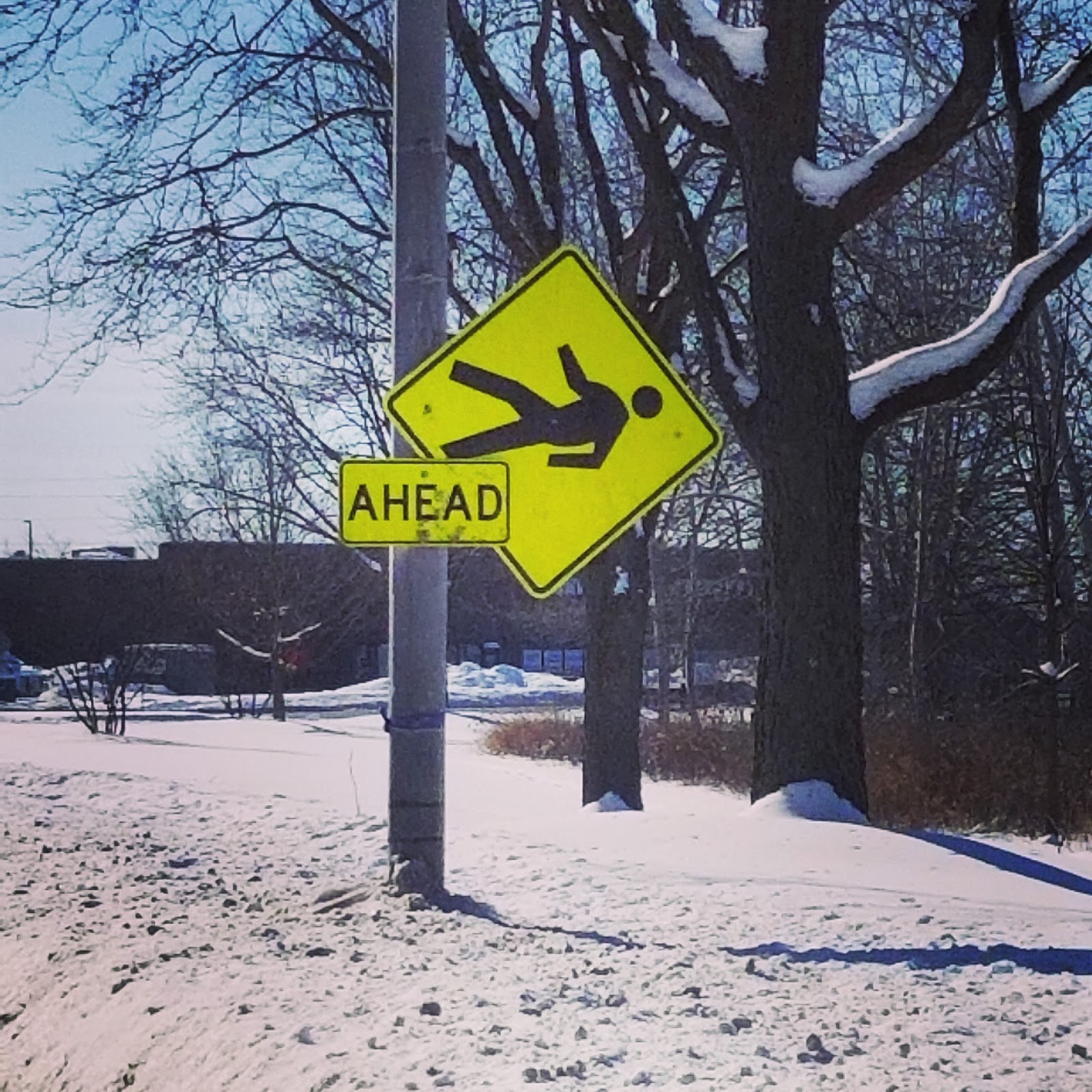 Because they put up signs letting you know that people crossing the street might slip and fall on the snow.

I mean sure, I think the sign was originally supposed to let you know that there may be people crossing the street ahead, but it’s pretty cool how versatile it can be if it should happen to lose a bolt and turn sideways during the winter. 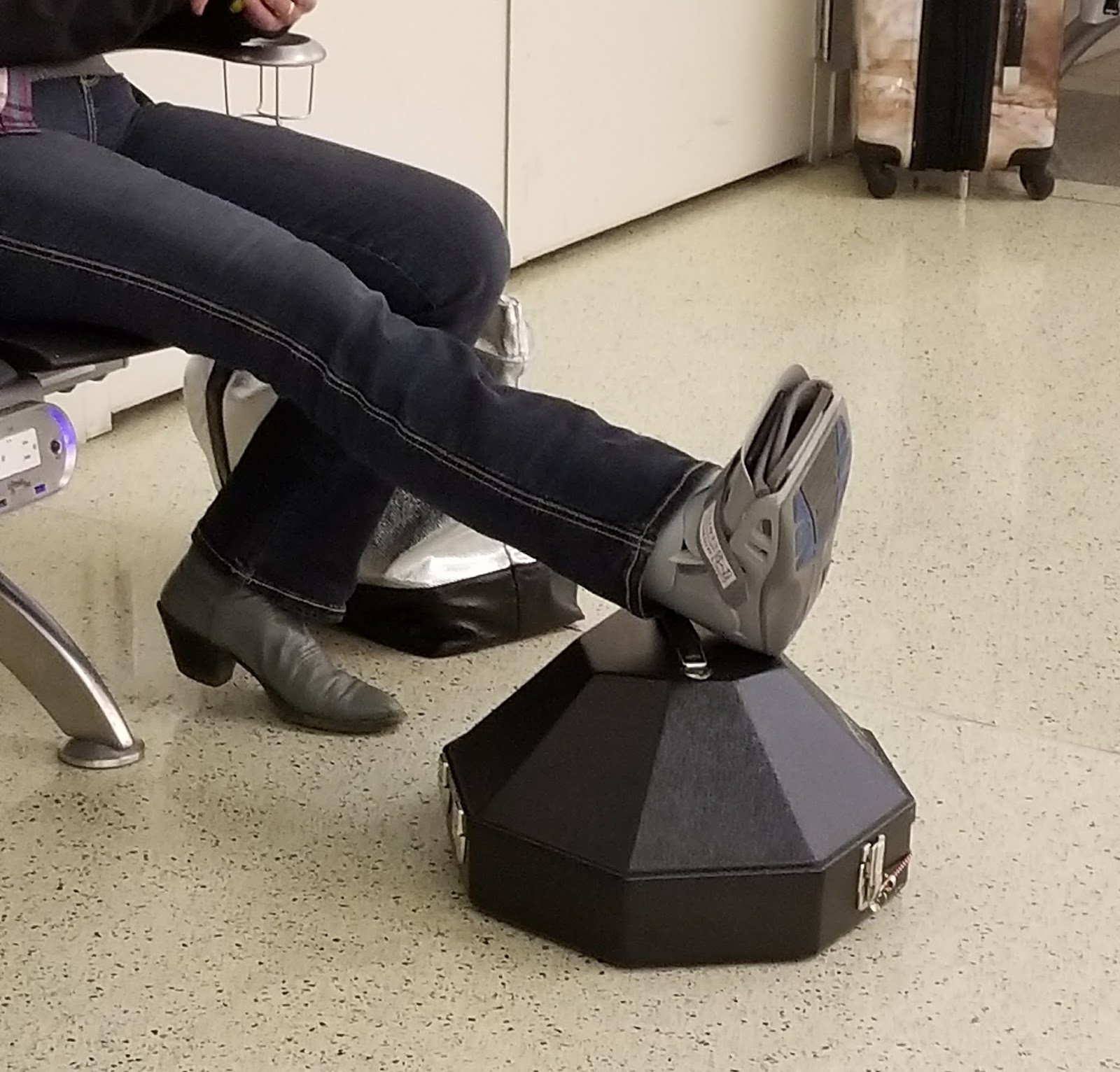 How the hell do you drive that? And why would you?
I sure as heck don’t want to need a tow truck every time I run over a pebble.
I guess, maybe, they think it’s cute. Like it’s almost a truck, but not quite. Like it’s trying so hard to be a truck, but it’s actually a sled.
Aw, cute.
****************
Why not start off your Facebook post with some random tangent about your driveway, like this post I saw in a local group? 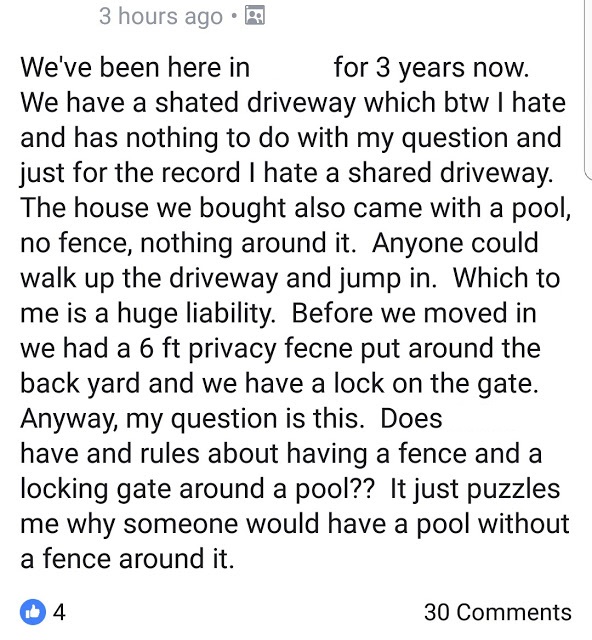 I don’t think she likes her driveway.

So there you have it my friends, a look inside of all the questions that keep me up at night. But before I go, I just have one quick question:

Does anyone want to give that guy a ride to work? I still have his contact info if you need it.
Tags: Why?
Newer Posts

Living At The Hyatt