Conversations I Did Not Think I Would Be Having This Week

Do you ever find yourself thinking “I can’t believe I just said that?” Mothers, I know you do this. “Stop licking your sisters eyeball. Get your toe out of your brothers cereal.” I find myself thinking “I can’t believe I just said that” at leave five times a day, so this week I thought it would be fun to let you be a fly on the wall in Eden’s life.
Every night when I tuck the girl child into bed I ask her the same three questions; “What was the best part of your day, the worst part of your day, and the funniest thing that happened?” Normally she rattles of a few things that can only be considered poignant in the brain of a five year old, but on Monday night she surprised me by saying “Or how about we talk about the boys that I like.”
“Um….what?” was about all I could stutter out.
“The boys that I like mommy, let’s talk about them.”
“Girl child, what do you mean ‘like,’ like you want to play with them and be their friends?”
“Yea some of them, but some I like a little more, like Cameron. I asked him to marry me.”
Apparently my kid got engaged at daycare. Please see also: We are now homeschooling.
“And what did Cameron say honey?”
“He said yes, when we are 30.”
“Well it sounds like you picked yourself a very smart boy.” Now I’m thinking ok, good we can just move on, but noooo, she interjects herself right into that little pause that happened while I was exhaling a sigh of relief and she filled it right up with…..
“So now that I’m getting married does that mean I get a baby next? You need a boy to have a baby right? Why is that? You said we don’t need a daddy, so how come you need a daddy to get the baby in you? If God wants you to have a daddy to have a baby, is that because the daddy puts the baby in you? How exactly does he do that?”
Hey, who wants ice cream!!!

On the plus side, I can at least give her intelligence points, because after I got her settled I went in to check on the boy child who was standing in his crib in just a polka dotted diaper.

“You’re looking at me with your smiley face?”

Not always the brightest crayon in the box that one, but damn is he cute.

On Tuesday a guy told me that I seem older than I am because I have “a lot of mileage” on me. I was like “Um, I’m going to give you a minute to explain yourself before I get offended, because right now I think you just called me a whore.” He was like “Oh no, not at all. I mean that you have had a lot of life experiences, lived through a lot that makes you seem older than you are.”
Yea, buddy if you want to live to be older, don’t go around telling women that they have a lot of mileage on them.
Also on Tuesday I went to the bank to drop off $31 in quarters that I had gotten from my garage sale. Now here was a new one for me, the bank wouldn’t take it because they don’t take coins anymore. Since when did the bank stop accepting money? The teller told me that they “can’t handle that much change in their drawers so they stopped taking coins, but if I wanted to take it to the grocery store for a small fee, the Coinstar machine would give me paper bills for the change.
“So let me get this straight” I said to the teller. “The bank wants me to bank at the grocery store because they don’t accept money anymore? You realize how stupid this sounds, right?”
“Sorry ma’am we don’t accept change anymore.”
“Ok, just so I’m clear, what you are telling me is that your bank no longer accepts money, money that the government puts out and deems the Federal method of currency, and you are an American currency institution, but you don’t take money anymore.”
She just stood there looking at me like I was stupid and I assure you I was looking at her the exact same way.
Speaking of people just staring at me, on Thursday my daughter had to have a medical test done under anesthesia. She has had quite a few tests like this done before and what I noticed right away was how rushed the anesthesiologists always are. I don’t know if it’s because they don’t really get to know their patients or what, but they always seem to just come in the room, barely acknowledge my kid, ask me a million questions, and then rush out the door. Yea, that’s not going to fly with me. This is my kid we are talking about and seeing as how they will be the person completely responsible for her breathing and other necessary life functions, I want them to acknowledge that she is an actual human being. Last time I remember telling the guy “Hi, meet my girl child. She is four years old, loves princesses, coloring, and singing. She is extremely important to me and I want her back in the exact form that she is in now. She is not just your nine o’clock patient, she is an entire lifetime so take care of her.
Well this particular Thursday the anesthesiologist seemed even more rushed than they usually are. I had requested that they give her whatever that sleepy gas is before inserting the IV and the guy had her out before I even knew it was happening. Before I walked out the door he asked me if there was anything else he should know and I said “Yes, you had better take care of her because I am not afraid to murder someone.” He took a minute to just at me and then he started to laugh. “Oh no. I am not joking” I said quite sternly. Then he just stared at me. 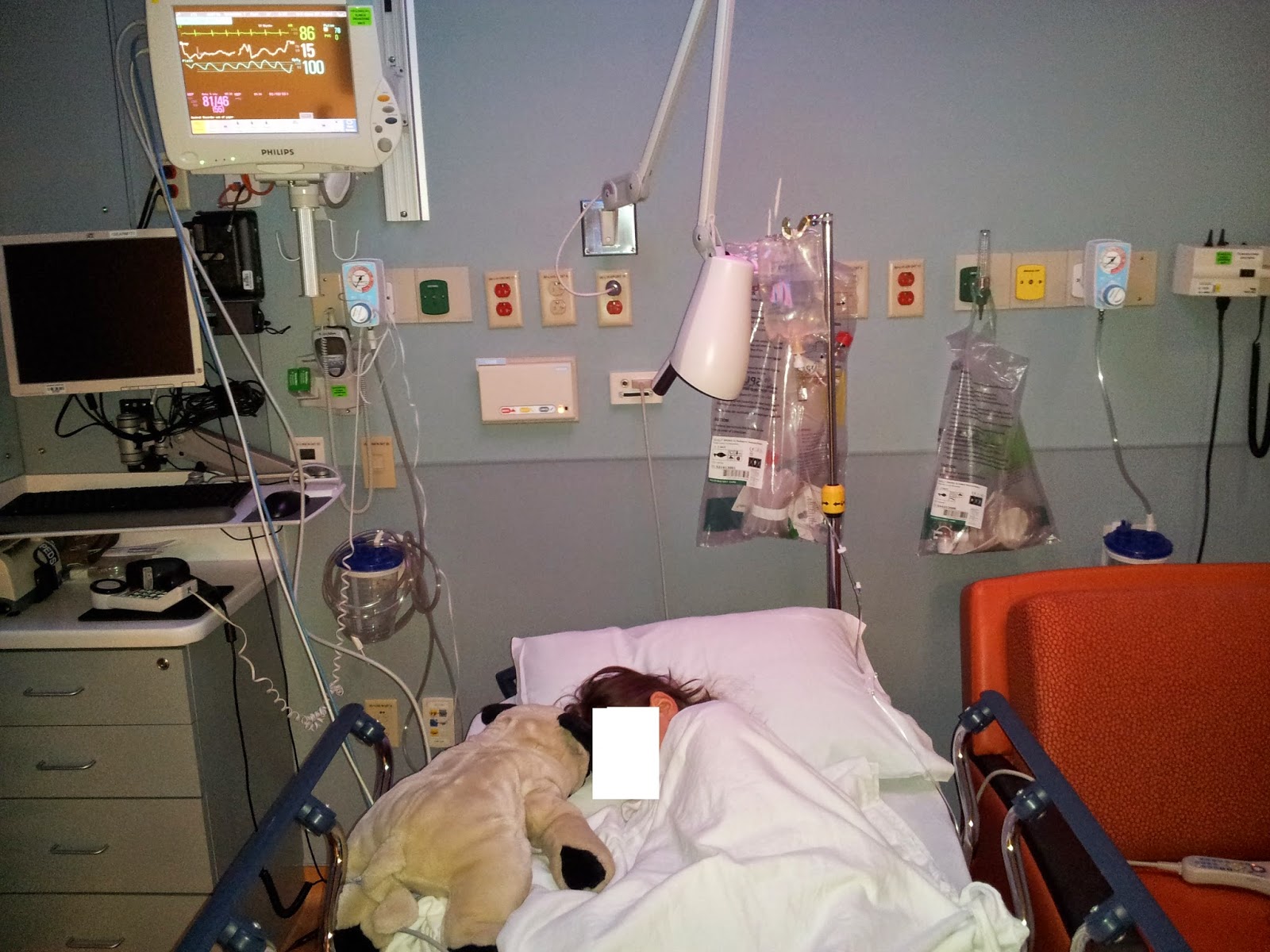 Jumping back to Wednesday, I was driving in the car with a friend when I, well, I ran over a bird. In my defense the birds in my town are seriously the dumbest birds I have ever seen. I had never in my life hit a bird until I moved into my town and to this day I have never hit a bird other than in my town. Not the next town over, nowhere except my town. But in my town…I am racking up quite the scorecard. I think it must be the fact that there are miles and miles of open fields. The birds not only breed by the seemingly millions, but then they fly through thirty miles of open air and don’t notice the car crossing their flight path until they are rolling off your windshield. That doesn’t explain the one’s that I’ve just plain run over though… Aren’t birds supposed to fly away when they see the car coming? 99 out of 100 times I’ll slow down needlessly because the birds fly away, but then there’s that one time when you don’t slow down and CRUNCH. It sounds like you are stepping on a rice chex. My friend looked over at me and said “You are one birdicide away from being a full blown serial birderer.” Nice. I’m claiming that was a suicide, not a murder. I was an unwilling accomplice, that bird was looking right at me until the very last second.
I think my favorite most informative conversation of the week might have come when a friend called me on Friday to tell me that a guy I’m dating had just uploaded a picture of someone’s boobs on his Facebook account.  She said she was scrolling through her newsfeed and just happened to see it pop up. “It disappeared right away so he might be hiding something because he deleted it immediately!”
Yep, he is hiding something alright. Hiding the fact that he accidentally uploaded a picture of my boobs on his Facebook. PG-13 sexting, gotta love it until someone’s tits end up on Facebook.
Now I’ll admit, I’m down for a little sexting with the guys that I date. It’s all innocent; I never send anything naked and I certainly don’t include my face so I’m always shocked when the dude sends back a full frontal face included picture. Who does that!? Why? Just why?? Let’s just say that I’m pretty happy that I keep my sexting to faceless beach attire, because this is what made it’s brief appearance on Facebook this week:
Last but not least, the most awesome conversation I had the pleasure of being a part of this week was when a neighbor messaged me to tell me that THE NUTCASE NEIGHBORS ARE STILL MOVING. In two months! To a state about as far away from me as you can get and still be considered living in America!! There is a God!! Mr. Nutcase’s company is moving them and selling their home which is why they threw out their boxes and took the old realtor’s sign down. Happy girl over here, happy girl!

So that pretty much rounds up the strangeness in my week, what is the weirdest thing you found yourself saying this week?

Tags: Conversations I Did Not Think I Would Be Having, Kids, Odd
Newer Posts

Yes, You Read That Right, Someone Shot My Daughter’s Window

Can’t I Just Bang Both Of Them?