He Makes My Clothes Fall Off

I really don’t like the police and yet I keep dating their detectives….

Very shortly after I broke up with Doctor Dude and Secret Agent Man, I met someone. He has the same name as my father and he is a detective. I am ok with just about none of that, although, because I am pretending to be a mature woman, I am attempting to see past that.
This dude, whose name I do not like because he shares it with my father, is a 38 year old gun crimes detective in the large city that I live just outside of. I’m talking murders, crime scenes, interrogations, the whole nine yards. It really freaks me out when I know that he was standing around a dead body earlier in the day and now we are eating dinner, but what freaks me out even more is that when he is on call, he quite often gets called in for domestic issues. Rapes, pistol whippings, things that make my own body want to turn inside out and vomit.
When I work with the abused women in my groups, I hurt for them. I’m not desensitized to their feelings and it actually upsets me when I know that they are hurting; yet as I watch him work his cases, I see him feeling….nothing. We talked about it one night, me asking how he deals with that stuff day after day and he basically told me “Eden. I’ve worked a few dead baby cases. I just can’t look at them as people anymore. They are just shells and that’s it.”
He is very sweet to me and we get into in depth conversations that last for hours, but we have never talked about my ex or any of the details of my past. It is not something that you will ever find me willingly bring up and my guess is that the tone I used when I said “he left and it’s better off that way” and the fact that I am working on a nonprofit for abused women has caused him to put two and two together, therefore leading him to just leave the subject alone.

To be honest, for the most part I like it that way. I like not having to jump right into conversations about things that cause men to run; the things that scare people away before they even get to know me.

On the other hand, it makes me nervous that he has become so calloused over time. It worries me that when it does eventually come up, it might seem insignificant to him; that because he is so used to dealing with horror on a daily basis that he might be unable to grasp how deeply affected I’ve been by what he might consider to be small problems.
Sigh.
The two of us decided to just take things casually with the intention of coupling up, but in the meantime keeping our options open. So, in the meantime, I bought a dishwasher.
I haven’t had a working dishwasher in over a year, but thanks to a grant for single mothers that I applied for months and months ago, I was awarded a small amount of money towards an appliance repair or purchase. I had a repair guy out to look at the dishwasher and they basically told me it was toast.
So…I needed a new one, but what is a girl to do when she has only a small amount of money to spend and yet needs an appliance that will probably cost her twice as much?

This is where I would like to tell you that I walked into that appliance store and using only sheer intelligence and the force of my awesomeness that I successfully negotiated the appliance deal of a lifetime.

Buuuuut….I would be lying through my teeth.

You see, as I pointed out in the post “Would You Ever Sleep Your Way To The Top” I am sometimes ok with letting my body come before my brain and this was one of those times. I have in the past successfully negotiated some very fabulous deals on sheer brain power alone, I just knew this was not going to be one of those times. I know nearly nothing about appliances and if I’m going to continue to be honest, I am really ok with keeping it that way.

So….body over brains wins this round.

I dressed my ass up in a very short skirt, walked into the appliance store, and waited to be approached.

Please see also; I will be awaiting the inevitable troll flaming and screams of dying feminists everywhere.
So I walk into the appliance store and thankfully the guy that comes up to me looks to be about my age (otherwise it just gets creepy). I flirt appliance dude up and down and haggle and bargain and then I send him away to ask his boss about a discount.
Appliance Guy comes back with a price that is over my grant money budget, so I tell him that if he can take $150 off the price I’ll take the dishwasher. He tells me he can’t do that much, but he can buy me dinner. I tell him that I’d rather have $150 off, he can save his $15 dinner, and I will make him dinner at my house where we can wash the dishes in the dishwasher.
He asks me who said anything about a $15 dinner, he was going to take me to taco bell.
I now kind of like this dude.
I end up talking to this guy for nearly two hours. We talked about everything from how some lady yelled at him for calling her “ma’am” because it made her feel old, to my nonprofit and his volunteer work, the psychology studies that prove people without a sense of humor actually have brain damage, to the fact that I had a hard time putting together the Ikea dresser.

Turns out that he is actually a piano player, degree in music, 32 years old, and working at the appliance store to supplement all the money that he doesn’t make with a degree in music. He volunteers on Wednesday nights and also teaches chess to little kids.

He is totally quirky and has almost zero game. Basically, he is so awkward that I find him to be completely adorable.
We are able to successfully negotiate a deal that slides me in just under the grant money budget and as we finish up he asks me if I want to install the dishwasher myself. I tell him that I’m fairly handy, to which he replies “I once knew this girl that tried to put together an Ikea dresser, oh wait…..that was you.”

As I am getting up from the service desk to leave, I lean over, give him my business card, and tell him my number is on there if he feels like using it.

The next day I got an email alert that someone, with his exact name, had made a $100 donation to my nonprofit. The email was followed a short while later by this text; 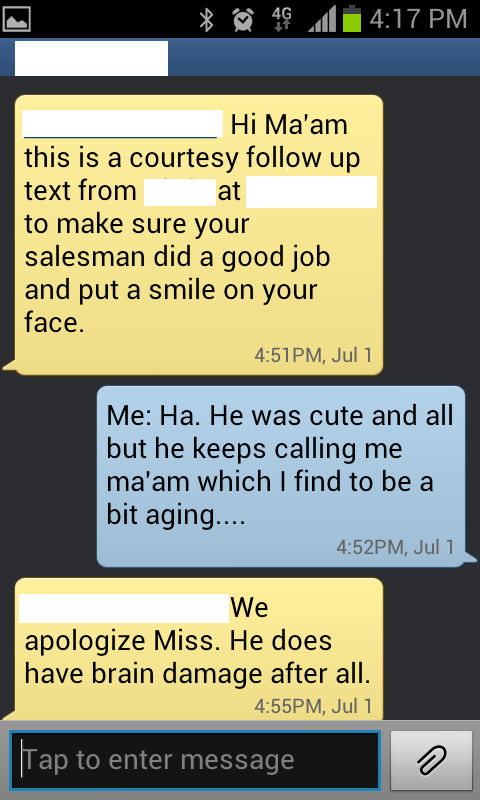 Over the last 18 months or so I’ve dated a lot of men with really intense careers. Among some of them were an attorney, the executive of a financial institution, an air traffic controller, Doctor Dude, Secret Agent Man, a wind turbine technician (that was an odd one), and now The Detective Whose Name I Do Not Like; all because I thought I needed someone who could understand my hectic lifestyle.

Appliance Guy, who I will now affectionately refer to as “Piano Man”, I dunno though, there is something about him. Something….simple.

Like he’s just this musician doing what he loves and going about his life. His player game is so bad that it makes him completely adorable. Not only do I want to get to know him better, but he also makes my clothes want to fall off.
Over the course of the next few days he made a valiant effort to get to know me. The problem is that I hate the “get to know me” part of dating. There’s all the obvious questions people ask; “Did you go to college? What is your family like? Where is your kids father?” I hate those questions for multiple obvious reasons. He was very sweet but very….interested.

I avoided answering most of the questions and then suddenly it just became too much. I started thinking about the nonprofit, the dance classes, the writing, the two kids, my crazy ex, The Detective Whose Name I Do Not Like but who I personally like very much, and all the other million things that are going on in my life right now.

I ended up telling him I was still dealing with a lot from my past that I really didn’t want to talk about and that I was too busy to start anything new. I told him that it wasn’t fair to him for me to drag him along for the ride when I’m not really in a place right now to give him the kind of relationship that he would deserve.

He did not buy it. 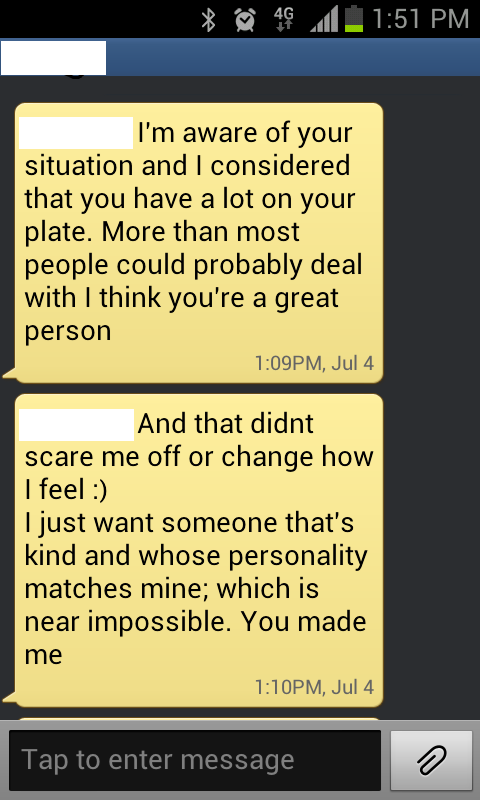 So this Sunday night I will be going out with a piano player that moonlights as an appliance guy and makes my clothes wanna fall off.

Who knows, maybe his simple lifestyle could be just what I need in my life right now.

Either way, this should be fun.
Tags: Dating
Newer Posts

I Saw My Mother