Well That Was An Interesting Turn Of Events

So….in an interesting turn of events;

Haha. Did anyone’s heart stop a little bit? Was that mean? I kinda thought it was funny.

No, I am most definitely not pregnant, not unless I am birthing a sibling for Jesus, in which case no angels have ascended upon me and told me of this glorious news….so I’ll feel a little bit cheated out of the experience if that’s the case. I am however, so very proud of myself.

Here, allow me to explain.
So, Piano Man and I, well… you guys….
As I told you in the post “I Just Don’t Even Know Where To Start,” Piano Man was trying so hard to get to know me and I, I just kept backing away. The more he did for me, the higher my wall went up. The closer he tried to get, the further I ran away. Well it didn’t get any better. In fact, it got to the point where he would just ask me a question and I would burst into tears.
Exhibit #1 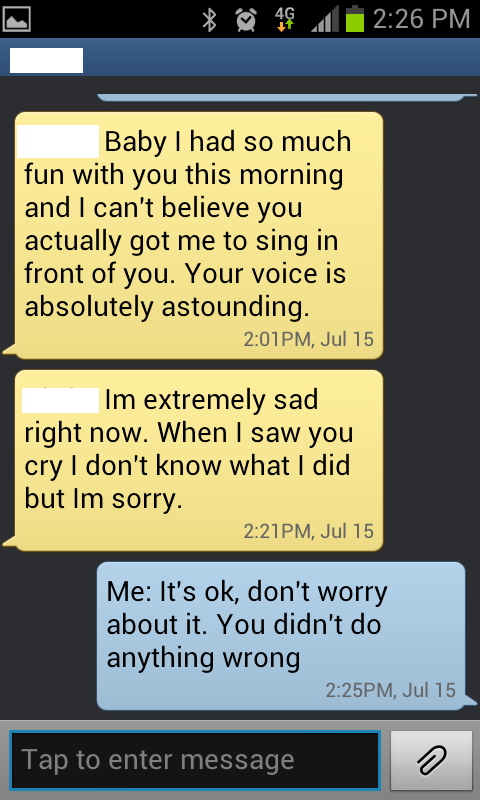 The story behind that text was that I had decided to let him drive me somewhere. I know that sounds like no big deal, but to me it is. I’m very weird about getting in the car with men that I don’t completely trust. I think that once you have a man enact the child safety locks and burn the crap out of your leg with his cigarette,you become a bit paranoid of something like that happening again. Either way, this particular morning I decided to put on my big girl panties and let him drive us to a breakfast place before we both went to work. We were on our way home and I was trying to take my mind off of the fact that I would rather be anywhere but in that car and so naturally I convinced him that we needed to have a sing-a-long to the radio. It seemed like the best way to stop thinking about how uncomfortable I was and so there we were, singing along to the radio at the top of our lungs, when he asked me a question about my past and I BURST in tears. Like I couldn’t even help it, tears were just pouring from my eyes and sliding down my face like a snowman taking a walk through the desert.
I felt scared.
No, not scared, I felt terrified.
For some reason a feeling of panic overwhelmed me and for a minute I debated if jumping out of the car at the next stoplight was a feasible option.
I felt so stupid.
Eventually I managed to pull myself together and he drove me home. He felt terrible and I felt worse.
Despite his sweet text we never talked about it but I made a vow to myself to act like the grown-up that I am the next time I saw him. I really liked this guy and I needed him to know that I was not completely crazy.
Over the next couple of days we saw each other quite often and yet something, something just didn’t feel right. I felt myself becoming increasingly nervous around him and I couldn’t figure out why because he treated me like an absolute princess. One night we were sitting outside of my house, having a drink under the stars, he was talking about nothing in particular, and before I knew it I was crying again.
What the hell is wrong with me? Like seriously, I’m a girl and yes, I am a crier, but not ALL THE TIME! Not all the time for no obvious reason other than irrational panic.
This guy has absolutely got to think that I am not only completely nuts, but that I should probably be medicated or something.

He noticed my tears, put an arm around me, and said “Baby, what’s wrong? Just tell me what’s bothering you? I hate seeing you like this. I hate that I’m doing it and I don’t even know what it is that I’m doing.”

You guys, I didn’t say a word. I tried, I really did, but as hard as I fought to open my mouth and make something, anything, come out, I got nothing. I felt my entire body stiffen against the gentleness of his hug and suddenly I found myself staring at the floor where the only thing that I could do was watch the tears splashing down onto my feet, hitting my pink nail polish, and sliding down between my toes.
How long did we sit there? I don’t know. Five minutes? Ten minutes? Twenty minutes? I really have no idea.
At some point I was finally able to get a sentence out; “I think maybe you should go.”
I hated myself right then, I really did. I hated that he was trying so hard and that I felt so damaged. Gosh I felt so incredibly damaged.
He left and I cried harder, still unsure of why I was even upset in the first place and angry at myself for being such a disaster.
The next day I tried to just move on as if it hadn’t happened, but he was still clearly unsettled by my ever present tears.
Exhibit #2 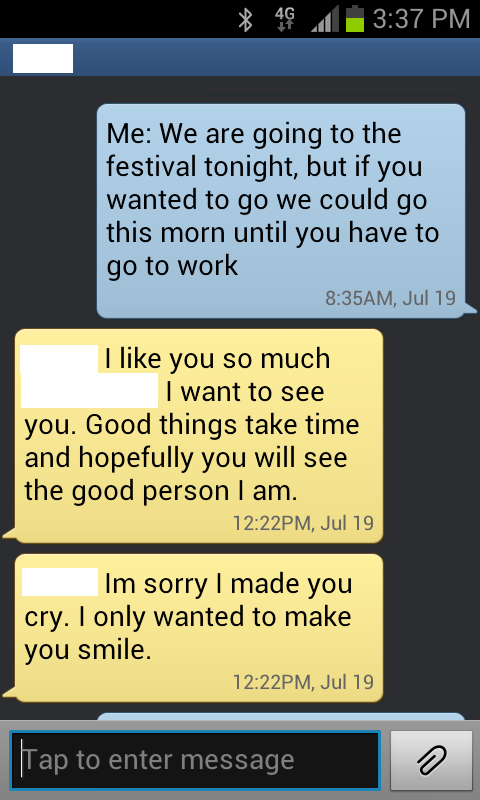 For a while, I sort of just checked out, masking my ever growing confusion with the facade of a full schedule. We kept talking, but the rift that was developing between us was obvious. I felt horrible. He had done nothing wrong and I felt like an absolute jerk.
“I’m going to do this. I’m going to call him and talk. I don’t know what I’m going to talk about, but at least I can tell him the truth. He deserves the truth” was the pep talk I gave myself on the day that I finally convinced myself to pick up the phone.
I’m going to call him and tell him that I’m scared.
When the ringing stopped, interrupted by his sweet voice on the other end, I told him that we needed to talk, and then I told him the only truth that I knew; “I’m scared.”
What he said next was beyond what I could have imagined in my wildest dreams… and then some.
“I know. I should have talked to you sooner. I thought they were bound by doctor-patient confidentiality laws but I should have figured that being your friends and all that they would have told you.”
What. On. Earth. Is this guy talking about?
What do you even do in this situation?
You pretend like you know exactly what he is talking about and you see how much information you can pull out of him without letting him catch on to the fact that you have absolutely no idea what he is talking about.
“Well, how did you even figure out that I knew them?” was the only logical thing that I could think of to say.
He bought it hook, line, and sinker, and then proceeded to explain. “When I looked at your nonprofit website and I saw that she worked for you as a counselor, I knew that I needed to talk to you. What exactly did she tell you? Did she tell you that I’m a lot better, that I’ve come a long way? Whatever she told you, I promise you, that’s not me anymore.”
About the only thing I can think at this point is “what the hell?” but if I was going to figure out what on earth he was talking about, I needed to hold it together.
“It doesn’t matter what she told me babe, I’d like to hear straight from you everything that you should have told me in the first place.”
I heard him take a deep breath before he jumped right into it; Anger management classes, drugs, addictions, alcoholism, rehab, medications, counseling; all services provided to him by one of the counselors that works with my nonprofit.
What on earth are the odds!?
I sat there for a minute, half waiting to see if he was done talking and half because I didn’t even know how to absorb all of that information.
Now anyone who has read this blog knows that my ex was an addict with major anger issues. I don’t talk much about the details of his addiction, but I enabled him for years and years because I thought that if I couldn’t get away from him, I at least needed to hold him together for the sake of me and my kids. I never enabled his habit directly, but it was me that covered for him every time he messed up. It was me that repeatedly mended the tattered fabric of his life because I knew that if he went down, he was going to end up taking us all down with him.
After he disappeared and I found myself abandoned a second time by a guy who turned out to be very much like him, I decided that something needed to change. I worked my way through a 12 step program for enablers.Yep, that’s right. I went every week, stood in front of a group, and said “My name is Eden Strong, adult child of a mentally ill mother, abusive parents, and the ex wife of an addict.” I worked my way through the 12 steps of recovery, serenity prayer and all. 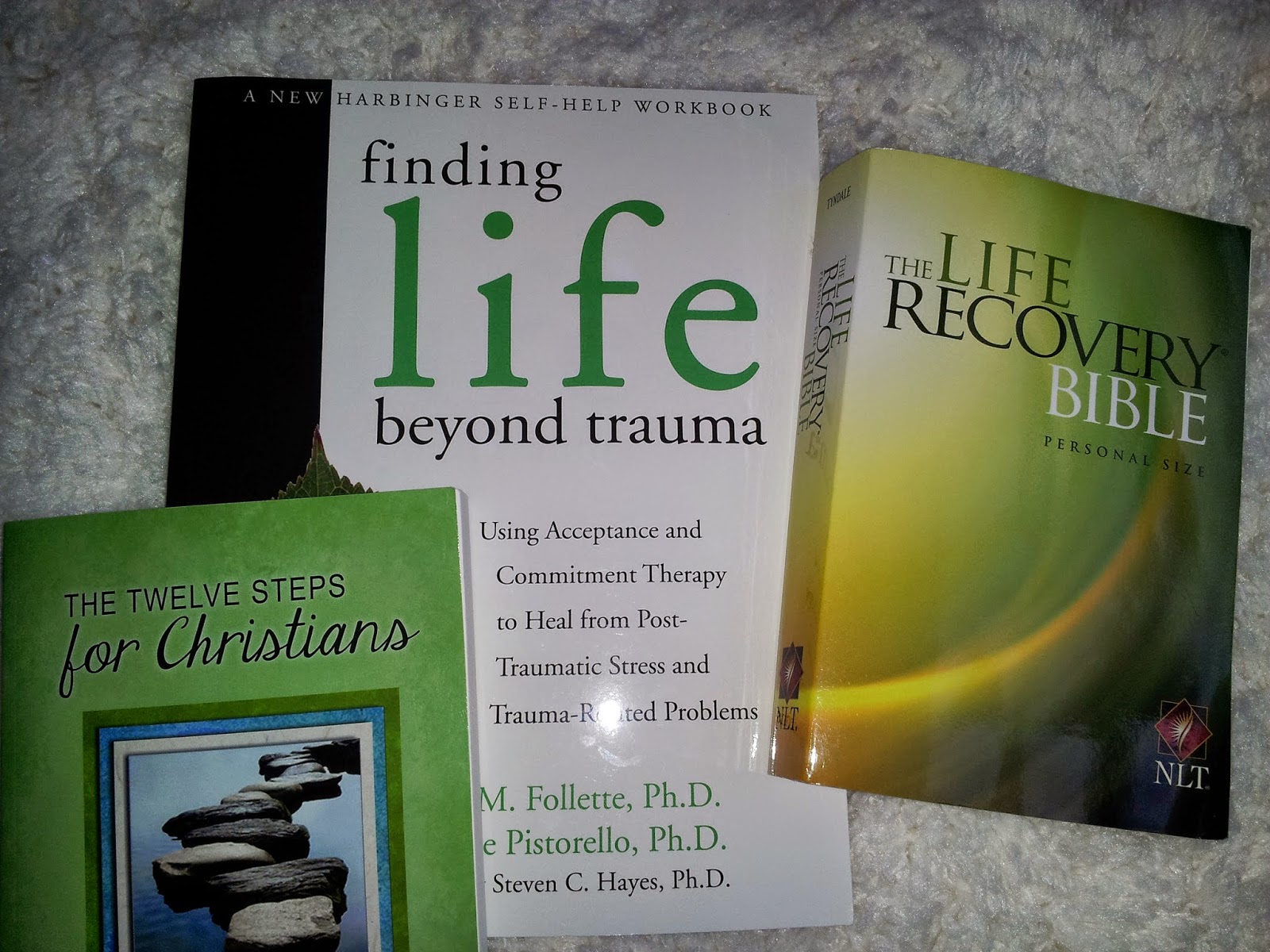 I’m Not Paying For That

I Can’t Believe I Am Sharing This Story Online