Not nice water heater, not nice.

Now I know what some of you might be thinking (those of you who have never had the unfortunate experience of having a water heater go out on you), “oh well good thing it’s summer and super warm outside, it would suck if that happened in the winter!”

Well I’m here to tell you, IT DOESN’T MATTER.

The water was just as damn cold now as it would have been in December. I’m sure it has something to do with the fact that it’s coming from like 10 feet below ground, but it wasn’t just cold, it was ARCTIC style frigid.

It was so cold that even though I was determined to get my morning shower in (trust me, no one wants to see my un showered hair in the morning), I ended up sitting on the side of the tub and giving myself a sponge bath. It was just so cold that I couldn’t even get in.

It was so cold that I hurt my neck.

I knelt over the side of the tub to wash my hair and did not realize how heavy my wet hair would be when flung over the front of my face with my neck bent towards my chin.

I’m now on my 9th Advil in an attempt to calm the headache that is stemming from my over extended neck, and I have to say, I’m disappointed by the claims of “pain relief” that are printed all over the box.

(Note to self, add “symptoms of an asprin induced ulcer” to my “things I must Google list”)

Because I’m not completely inept at home maintenance, I knew enough to know that the water is heated in the tank with the assistance of the pilot light, and in looking at the water heater I could tell that the pilot light had gone out. I tried a few times to re-light it, but it didn’t work.

Eventually I did what any single woman would do in this situation and I took to Facebook for help. 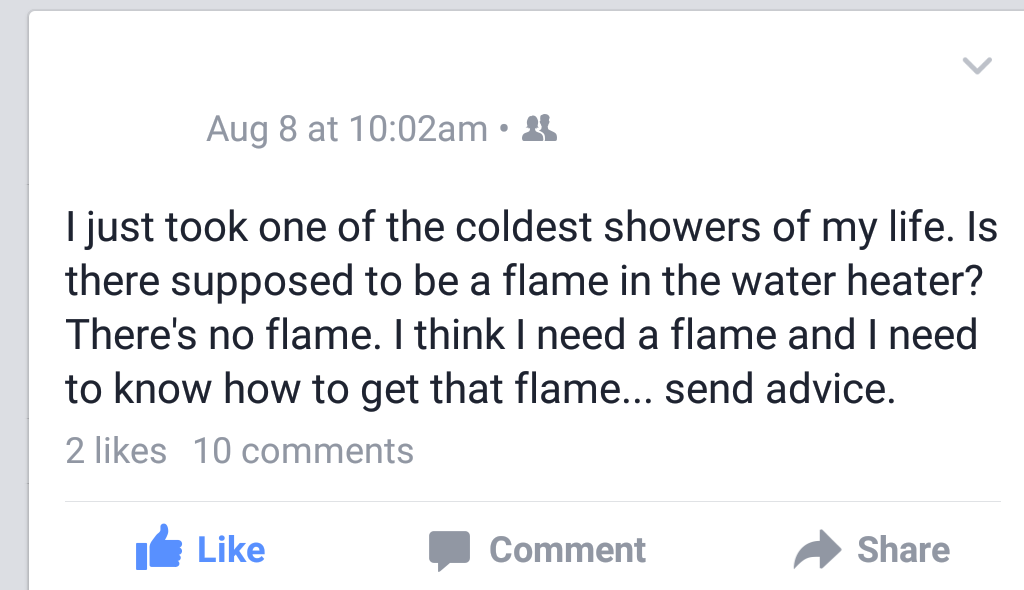 Unfortunately no one had any magical advice for me and after a quick Google search I determined that I needed a new thermocouple.

I have absolutely no idea how to install a thermocouple.

Several months ago my water softener started overflowing and despite all my at-home fixes, I eventually had to call a plumber. The guy that came out was pretty cool. He fixed a kink in the line and told me nothing was wrong with the water softener, but on his way out the door he noticed a pipe that my ex had illegally snipped and soldered shut. He freaked out, telling me that having a “dead run” pipe like that is exactly how people get legionnaires disease and that it needed to be fixed like five years ago.

Legionaries disease is not really something that I care to experience, so I told him “by all means, go ahead and please fix it.”

I had no idea the landslide that would ensue.

Apparently they make stud finders to locate wood in walls, but not wall metal detectors to find pipes.

How do I know this?

Because I watched him cut a giant ass hole in the wall only to say “Huh. The pipe branch isn’t in there. Well… maybe it’s over here!” and then cut another hole, where the pipe was also NOT THERE, followed by a third hole, where guess what? No pipe!

This dude was decorating my walls with a swiss cheese decor.

Eventually he found the pipe branch, but by the time he was done I had FEET of drywall missing.

He felt so bad that he only charged me $50 for the work before leaving me with an apology and the assurance that we would not all die from legionnaires disease.

And yea sure that’s great and yay for safety, but the holes were so large and in such awful places that they needed to be fixed by a professional.

Thankfully my neighborhood has a Facebook page that functions as a resident service-trade site where we all list our businesses/skill sets in an effort to network within each other to save a few bucks. I was able to find a well referred neighbor who does drywall finishing and after coming to take a look at the walls, he said that he could fix them for not much more than the cost of the materials.

He came over the next day and did a really great job on the walls, but as he was getting ready to leave he pointed out a crack in the ceiling.

Although because he is awesome, he offered to fix it for free since he had all the (…what is that called, spackle? Sure let’s call it spackle) spackle mixed already.

He then fixed the crack in the ceiling, left, and I spent the next five hours cleaning drywall dust off off of every. single. freaking surface in my entire house.

I don’t know if you’ve ever sanded drywall in your house, but it is basically the same as if God himself came down from heaven and covered every single thing you own with a fine layer of powdered sugar.

It’s exactly like that but not miraculous and not sweet.

So I guess it’s nothing like that, it’s just annoying as hell.

Yes, that’s exactly what it’s like. It’s as if Satan himself had climbed up from hell and covered every single thing I own with a fine layer of DRYWALL DUST.

I am fairly convinced that if I die and come to consciousness in a land where everything is covered in drywall dust, kids are vomiting, I have bare feet and the streets are littered with Lego’s, and the sign above the gates says “Chuck. E. Cheese,” I will know that I did not make it to the promised land.

When I finally finished cleaning up Satan’s dandruff and melted into the couch that night, I finally took a better look at the ceiling, and… OH HELL NO.

Now that it had finally dried I could see that it was lumpy, bumpy, uneven, and UGLY.

After contemplating the issue for a little while, I texted the drywaller my polite complaint concern about how bad his free work was the appearance of the ceiling.

Trust me when I say that it had to look REALLY bad for me to bite the hand that fed me.

He rushed right over, looked at the ceiling for a minute, put on his “pondering” expression, and then said “huh. I forgot to sand it. I patched it, sanded it, threw a second layer of spackle on it, but then I forgot to sand it again.”

I mean I can’t and won’t fault the guy for being human, but still, annoying.

He sanded it, I cursed his name thanked him, and spent five more hours cleaning up the freaking drywall dust.

And then something dawned on me.

Spackle is not clear.

Although I still have the paint cans that I originally painted the walls with, I do not own any ceiling paint.

There are approximately 1.7 billion shades of white and none of them match.

Now the ceiling had patch marks all over it and I couldn’t find the paint to match it. Short of painting the entire ceiling — which just so happens to span the entire living floor — there was nothing I could do. My friends husband is a painter and he tried to mix something up for me that he thought might match, but even that didn’t come close to matching.

In the meantime, the ceiling cracked again.

OF COURSE IT DID.

I called the drywaller, not to complain this time, but just to ask him what he thought might be going on. After coming over to inspect it he basically told me that my 3rd floor could collapse onto my 2nd floor and that I needed to get a structural carpenter out right away.

I do not want my 3rd floor to fall down onto my 2nd floor.

I got a carpenter out there right away.

The carpenter came over, laughed at me, and told me there was nothing wrong with the structure of my house. That at some point it had settled in a way that put a little pressure on that particular piece of drywall and if I wanted to, we could take the entire ceiling down and replace it (NO!), or a painter could just caulk the crack and be done with it.

But none of that is in my budget right now and since my 3rd floor is apparently not going to fall down on top of me and squish my tiny little children, I’m currently learning to enjoy my mismatched cracked ceiling.

I’m just going to say that I have an eclectic-rustic sense of style.

Hey, at least I’m not going to die from legionnaires disease, so I guess it’s all relative.

But now, now the water heater stopped working and that is not something I can wait on unless I want both of my kids to die from hypothermia in the bathtub.

Plus my neck still hurts.

Thankfully I had saved the plumber’s information in my phone, conveniently under the contact name of “plumber.” 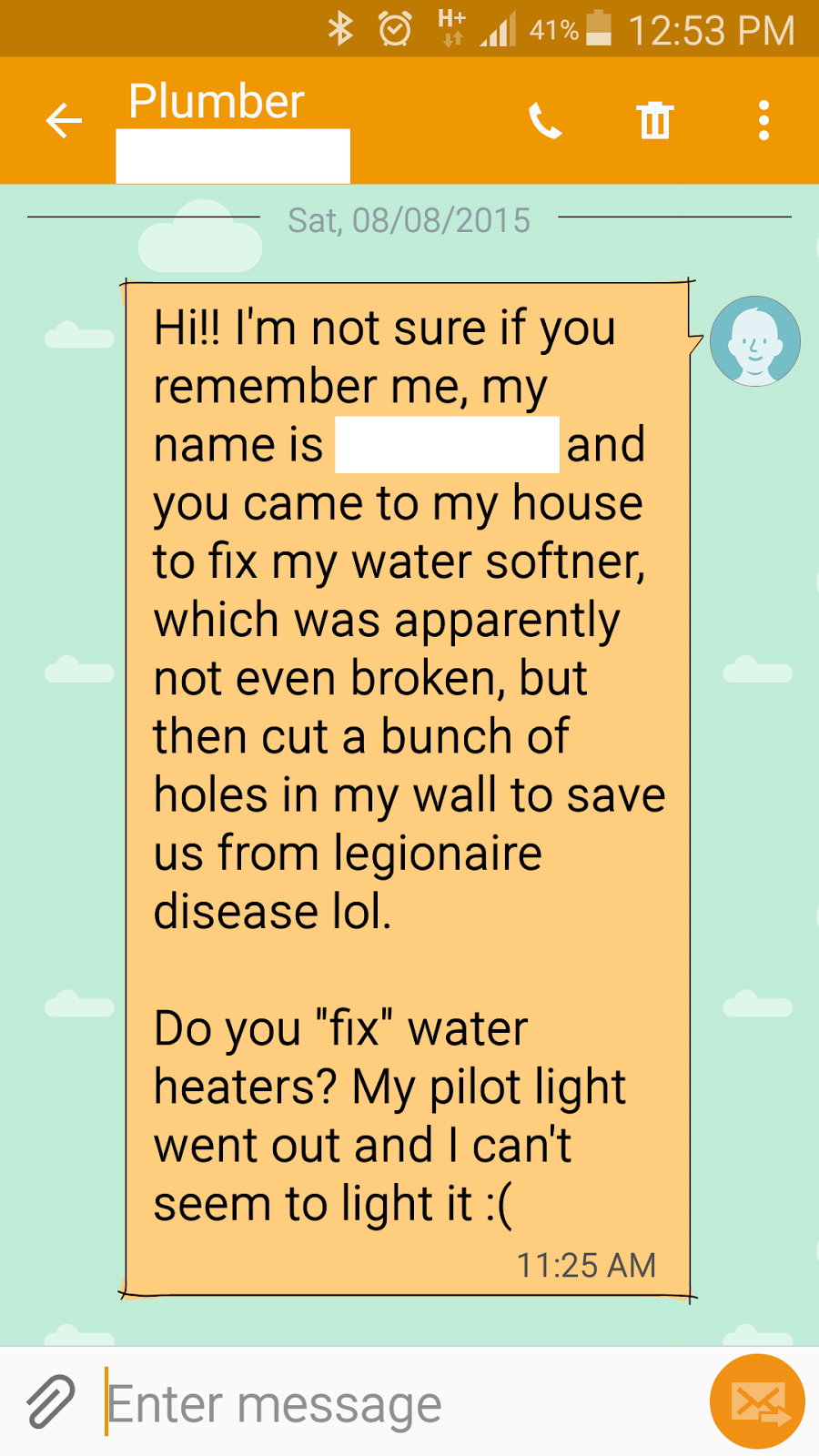 He called me right away and said that he was going to a baseball game, and assuming that he does not get drunk and end up in Canada, that he could come the next day to fix it.

I told him to pin his address to his shirt and have a great time.

The next morning’s shower was just as cold as the day before, but it was the morning of the pole dancing class and stinky is not sexy.

It was a cold shower.

My neighbors thought this whole thing was hysterical, especially this neighbor who is ironically not the creepy neighbor that I always talk about. 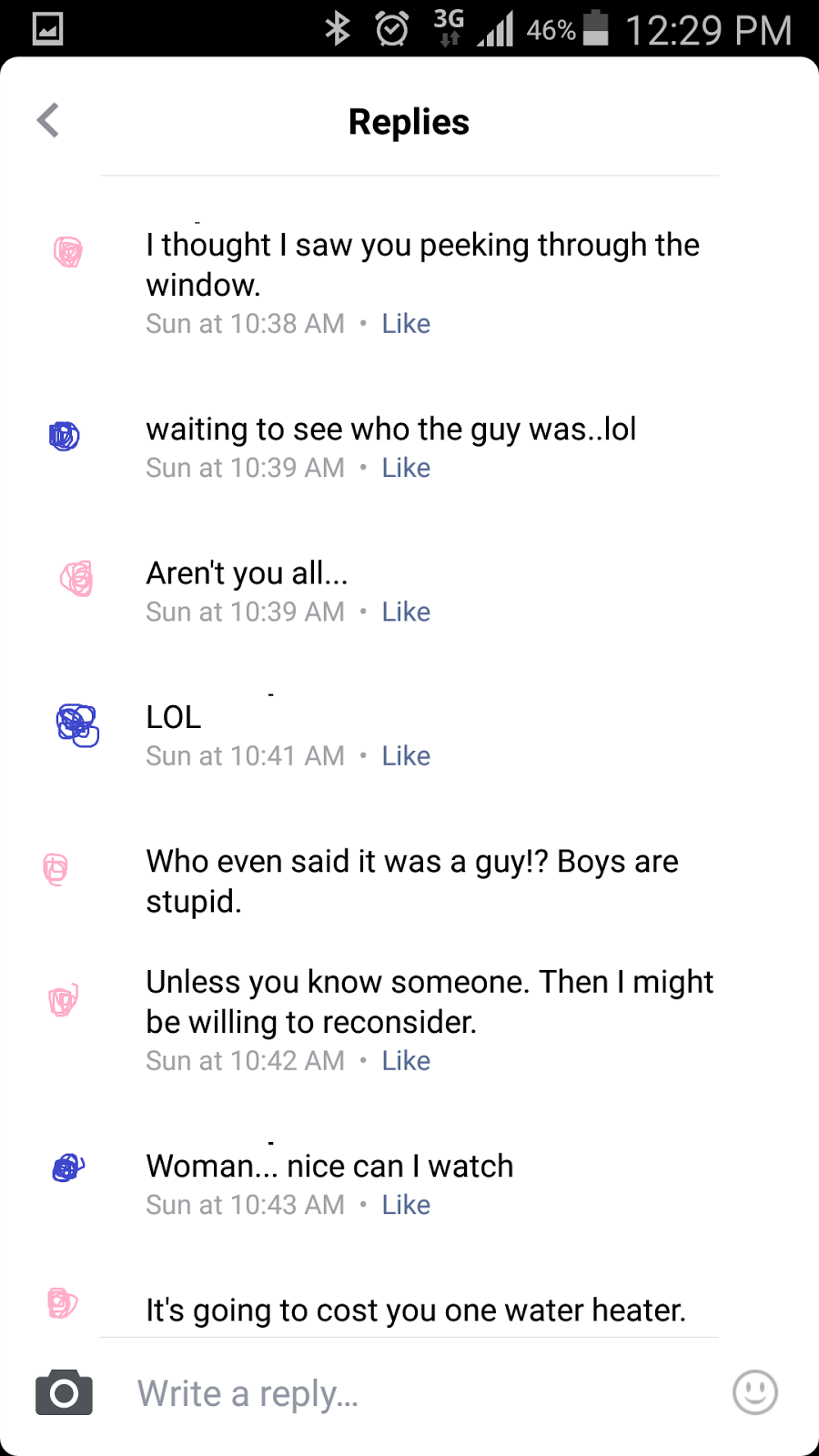 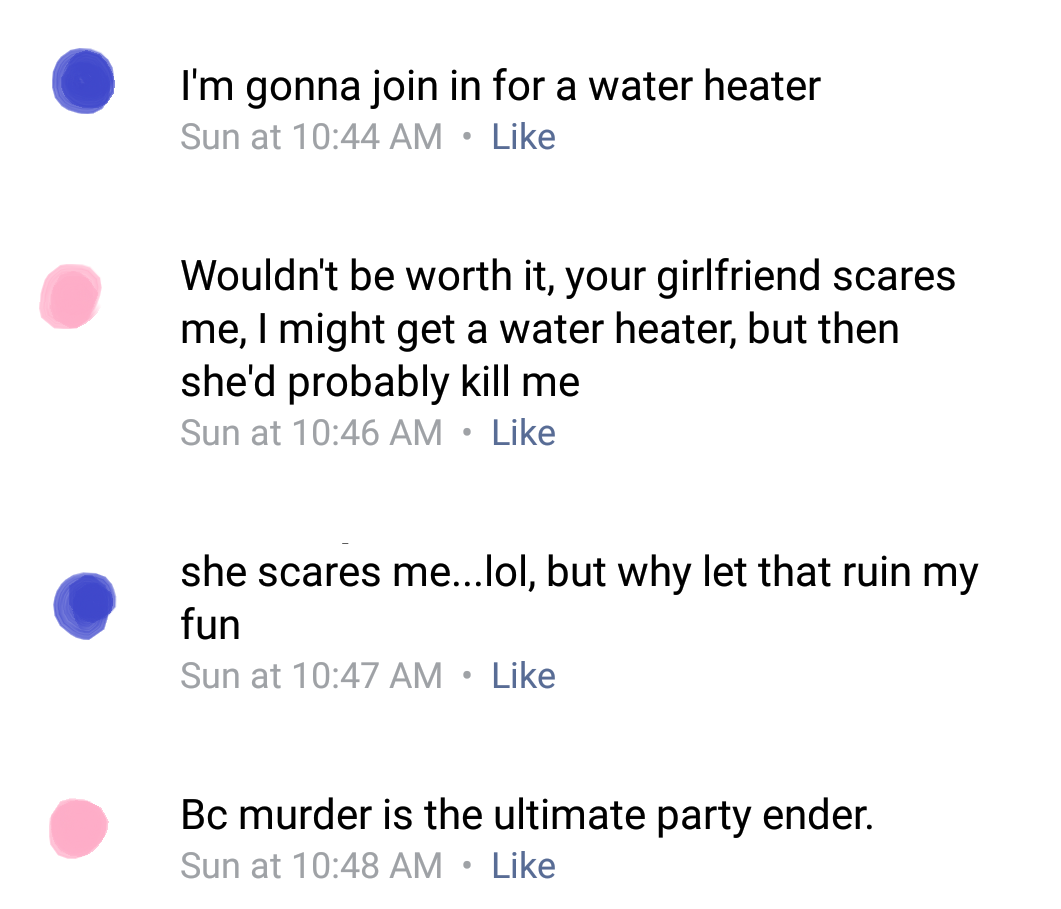 Yep, not really in the market to be someones affair.

Anyway, finally the plumber came and $30 later, yay, my water was warming up and my shower the next morning was heavenly. 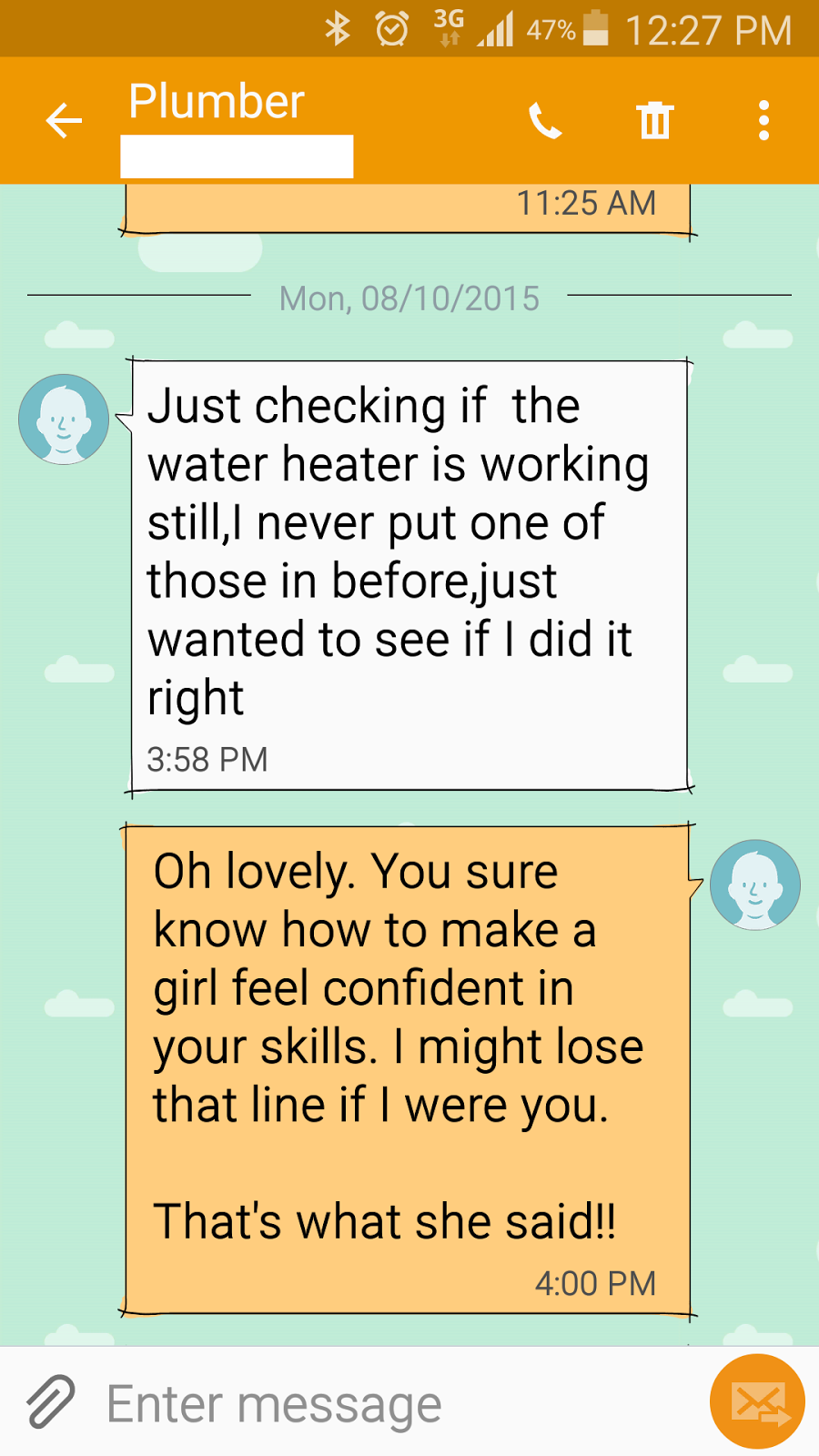 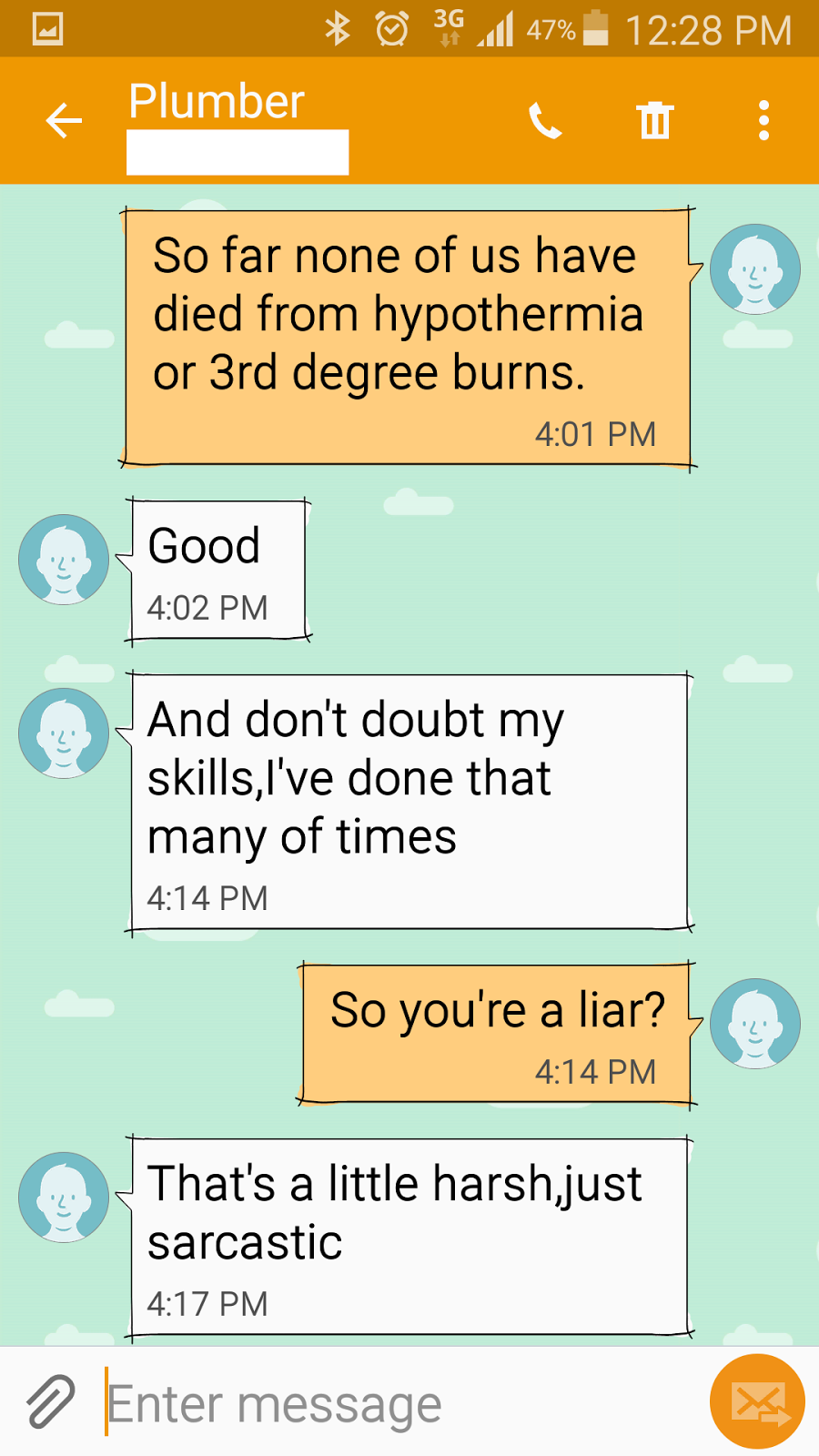 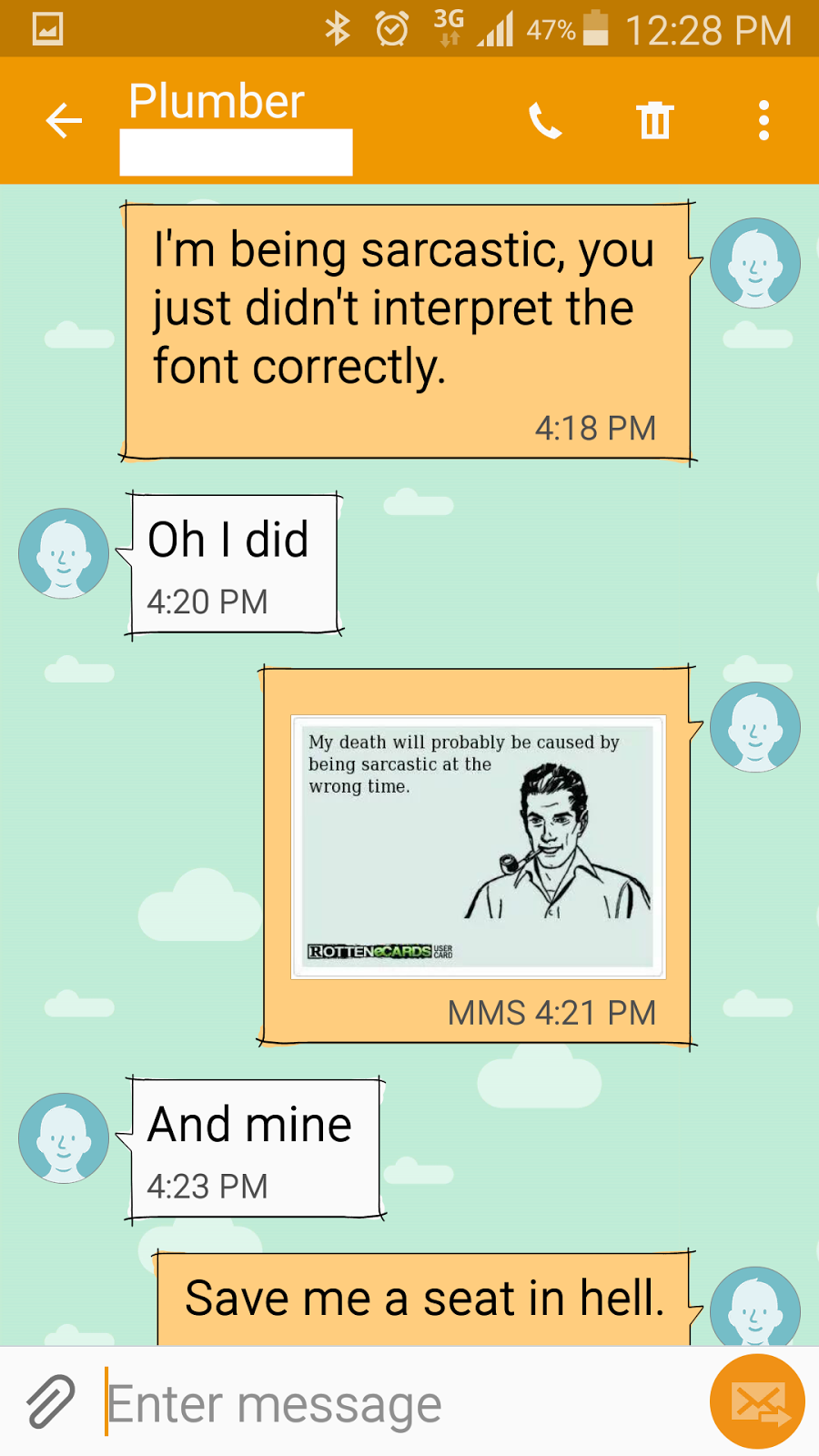 I would now like to make the official statement that I am tapped out of home renovation patience and am calling a hiatus on household repairs.

Which knowing my luck means I’ll have a flood or an explosion of some sort within a week or two of posting this.

Give The World A Reason