I Met The New Neighbors

So I met the new neighbors.

I was supposed to meet Frisbee Boy’s Mom for lunch and she asked me to stop by her house first. When I got there she literally handed me a banana bread and said “I made this for your neighbors so go over there and meet them. Take this with you and don’t tell them I made it.”

I’m not used to listening to “adults” anymore so this “mom” thing she has going on these days is still new to me. Although, I have watched enough TV to know that at this point I’m supposed to say “ok, will do,” and so I did.

That night shortly after I got home, I walked across the yard to my new neighbor’s front door and rang the doorbell.

The next thing I know I can hear someone yelling and I, like a total idiot, am looking behind me, above me, and next to me, wondering who is making so much noise.

Then I hear the knocking.

I only then realize that the sound is coming from the window next to the front door, the window where some dude is knocking to get my attention and yelling “WHAT DO YOU WANT?” at me.

The door opens and a man with a long pointy beard and an eclectic sense of style is standing in the doorway. “Do you want to come in?” he asks me.

Um no, not really, because I’m a little freaked out now, but you know what? It’s 13 degrees outside so I’m willing to risk it.

I step in and before the screen door even shuts behind me he asks me “what are you holding?” with a tone that screams accusatory more than curiosity.

“Oh, it’s uh, banana bread. I was welcoming you to the neighborhood. This was actually a lot less awkward in my head than how it’s playing out.”

I ACTUALLY SAID THAT.

“Oh wow, thanks!” he exclaims as he takes the banana bread from my hands. (yay progress!) “What’s in it?” he asks.

Shoot. What the hell is in it? What am I supposed to say here? “Oh I don’t know, I didn’t actually make it, I’m just regifting it and passing it off as my own.” Thankfully I did not say that, what I actually said was “Oh….you know….surprise.“

“Well I just thought that since you have to listen to my kids yelling through your walls that I should probably come over and introduce myself” I say.

He assures me that he has not heard my kids and that speaking of loud noises I should come over Saturday night because they are having a huge party.

I try to think of how I can tactfully tell him that I would love to join him from the other side of the wall.

I can’t think of any way to say that and so I change the subject.

I tell him that I had waited a few days to come over because I saw so many people coming and going that I wasn’t exactly sure who lived there and wanted to give them some time to settle in. (I actually had previously introduced myself to two people who I thought lived there, but didn’t.)

Ok…thanks for all those confirmations that it’s just the two of you, because now what I’m really hearing is “pay no attention to the undocumented citizens in the corner.”

Whatever, you can cram thirty people in here if you want too, As long as one of them isn’t a former nutcase neighbor I don’t care who the hell lives here.

We have absolutely nothing in common but he seems genuinely nice, so really, I think it went well!

It was slightly awkward but hey, it can’t be anymore uncomfortable than living next to the Nutcases was.

It was also significantly less awkward than what happened the next day. Remember my neighbor from across the driveway who I had to literally finagle my way out of getting a goodnight kiss from and then literally close the door in his face?  Well I was trying to pull out of my driveway so that I could get the Boy Child from daycare and he came over to talk to me. I was in my car and he was talking and talking and talking and eventually I said I needed to go. He then leaned through the car window and gave me a hug.

Not just a hug, but like a HUG. I was fully wrapped in his arms with my face was unwillingly pressed into his shoulder.

He topped it off with a lingering kiss to the top of my head. 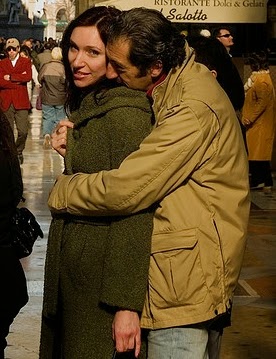 So yea, at least meeting one of the new neighbors was less awkward than that.