Well, it’s that time again. Time to head somewhere that typically just pisses me off and makes me a rather unpleasant person to be around for the 24 hours after I leave said place; mostly because it’s a place filled with creepy people, a ridiculous judge, and an ex husband that I despise.

Oh yea, and there was that time Mr. Attorney Man and I almost died there. Not really, but almost.

Yep, it’s time to head back to court again on the never ending quest to get my ex husband to pay child support! Remember how the last time I went to court, a judge found my ex guilty of contempt for not following a court order, and not paying child support? Remember how thrilled I was to hear the verdict, until mere moments later when the judge said “Oh, sorry, struggling single mom of two special needs kids, who has been in front of my bench 15 times in the last four years since your ex never pays you, I’m actually not going to send him to jail. Instead I’m going to give him an extra 90 days to pay you half of what he owes. Because he only has himself to worry about and one job to work and I think that you look capable of getting a few more jobs to take care of your sick and disabled kids when you aren’t sitting in a hospital for weeks on end, so just hang in there for a few more months since it’s only been four years, and then just take the discounted money and be happy with it OK?”

Well, he didn’t exactly say that, but it was very much implied.

“You know, Judge, I really only wanted half the money anyway, in case I just wanted to start feeding my children half of what they need and only clothe them halfway.”

In fact, let me get your opinion on this: Do you think I should clothe just the kid’s top half, or just their bottom half? I mean pants seem like the obvious way to go because of indecency laws and all that, but I dunno… If I could somehow just get them into the daycare without anyone seeing them, and seat them both at a table, well then maybe a shirt would be better because while seated they would look fully clothed and that would probably save them the embarrassment of only having half of what they need.

See what I mean? It really is a conundrum and I’d like your opinion, so please, leave your comments at the bottom.

Oh but wait, when leaving your opinion, please also factor in that my ex took his three months, and still didn’t pay me. So I’m going to need you to actually take away all of whatever half you choose, cuz I gots nothing.

Actually, my ex did send me a check, but it was so small compared to what he owes me that it was laughable, and didn’t even equate to like 5% of his balance due, but watch the judge say “well he tried!”

He is a loser. And when I say “he,” I am referring to…. actually you pick. Your choices are my ex or the judge and either one will be an acceptable answer.

I swear, this whole thing is making me lose my Jesus!!

So yay, court again. I wonder what new and exciting ways this judge will find to screw me over this time. Court these days feels like Kama Sutra without the orgasm. A little bit scary, you aren’t quite sure what just went down, and there was no happy ending.

My friend is yellow and I am blue 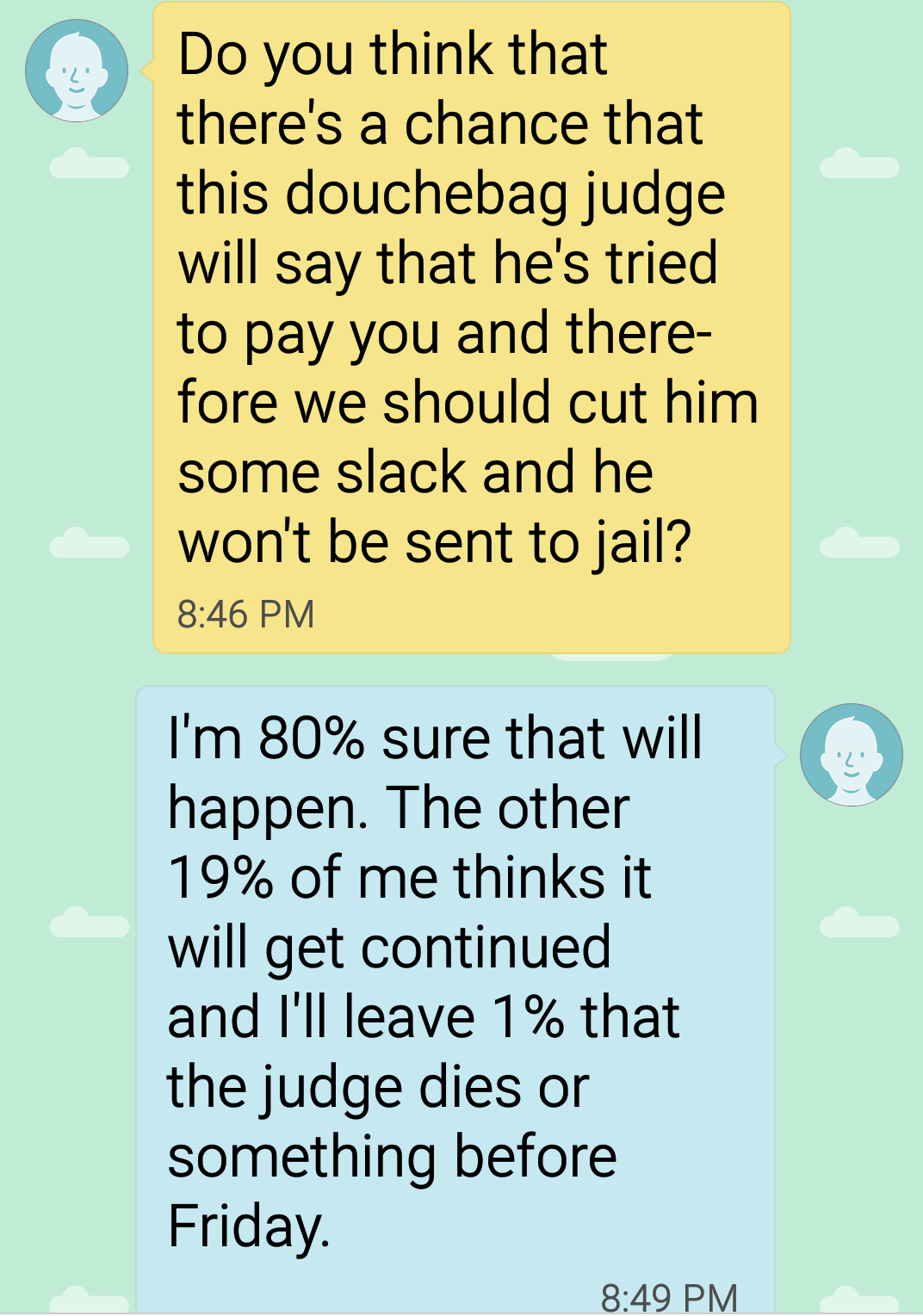 If you can’t tell, I have COMPLETELY lost faith in the system, and that makes me really sad because since my kid’s father isn’t willing to provide for them, and the law isn’t willing to fight for them, then that just leaves me, which is a lot of pressure.

But I’ll do it. I’ll do it, because they deserve to have someone fighting for them, even if it’s just a really worn out mother and her super awesome attorney. Seriously though, my peppiness about the whole situation is over. Sorry, but no motivational speech this time, because this is just stupid. The system is not supposed to work like this and I’m frustrated. I’m so, so thankful that at the end of the day this is just money and I’m not fighting for the custody of my kids (a truly huge blessing), but I can’t help feeling annoyed with how messed up this process is.

So, wish Mr. Attorney Man and I luck, pray for us, and send us all your good vibes, because we are going back to court on Friday so that we can continue the good fight and watch justice be served.

Or, you could just send me wine, because if history repeats itself, I will need a few bottles of it come Friday night.

“I Went To Court And Actually Learned Something”