Hey all, so it’s Mother’s Day over here in the US, and as many of you probably remember, I typically hate Mother’s Day.

But, I’ve made a little bit of progress. Last year not only was I pissed that I am a single mother, but I was also pissed that I didn’t have a mother. Now although I’m still a single mother, and I still don’t have a “real” mother, what I do have is a pretty darn good stand in for a mother, and as I’ve come to realize over the last year, having a surrogate mom is way cooler than having a biological mom.  It’s obviously not the same as having a real mom, no comparison in many areas, but in the fun area having a surrogate mom can sometimes take the cake!

Frisbee Boy’s Mom reads this blog as you know and after she read a few of my recent posts she gave me a call saying that we needed to go out to lunch asap because “you need a stiff drink.”

Anytime the two of us get together it’s pretty much sheer chaos. I mean nothing ever goes right, it always just goes…us. She is very much like me which means that together it’s just really weird.

So anyway, I decided to take her up on her offer and after we decided on a day to go out, she sent me a text that said “how about we meet at eleven? Restaurants start serving lunch at eleven so at least it will be a little more socially appropriate if we have a drink.”

So we met, ate, had a drink, and then she asked me if I want to go get a bikini wax with her.

With her, as in like right then, with her.

Which ironically wouldn’t have even been the first time that she would be up close and personal with me, because on my wedding day when I had a mishap with my dress, it was her who was completely underneath it doing a makeshift altercation (while I was still wearing it), because my own mother was nowhere to be found.

Anyway, back to the present, I had already taken care of business, but jokingly told her that next time she was going to get vajazzled that I would join in on that.

She didn’t even miss a beat before replying “then let’s just go do that right now!”

On second thought, if I’m going to take the time to have gems stuck all over my lady parts, I’m going to do it on a day when someone is going to be… down there.

(Which actually got me thinking, I don’t really understand vajazzling. I mean like… it’s super cute…but like then what? Like… if you are doing… something….what if the beads go like….in? HOW DOES THIS WORK?)

We did not go get vajazzled but did however make plans to go do it soon. She got waxed without me and naturally shared the results with me, which was not creepy at all, because she is not my bio mom. 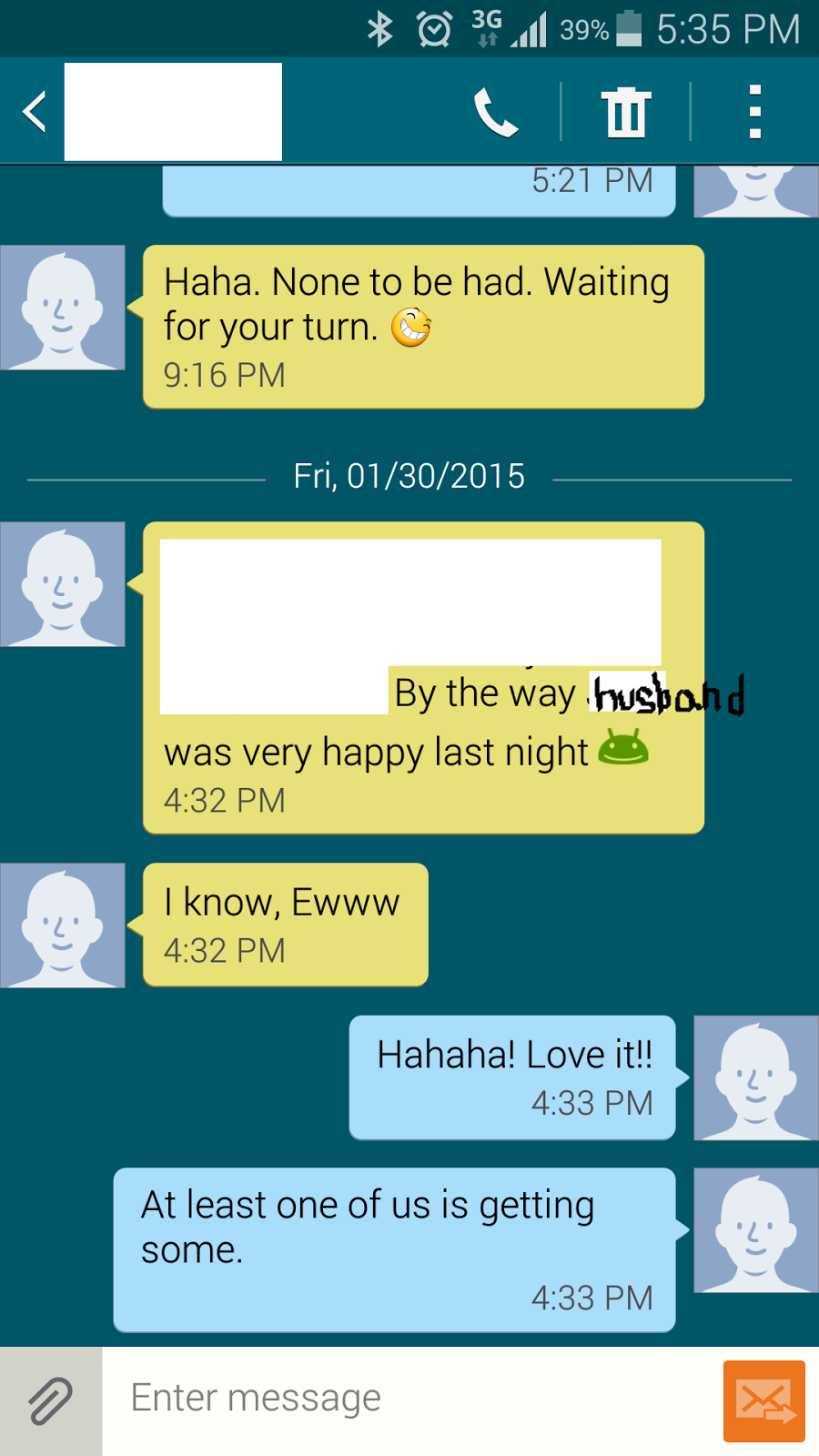 Her text to me the morning after her waxing.

All the mom fun, plus more fun that you would never have with your real mom.

Before any of that occurred though, she insisted on taking me grocery shopping. She took me to Aldi which was a whole new experience for me because I have not been to an Aldi in probably 12 years or so, and I was really surprised to see that they have gluten free and organic line now!

While we were there she snapped the little gem of a photo that I’m posting below. In her exact words she said “I’m taking a picture so that your readers know that you getting stuck inside the cooler at the grocery store was not an isolated incident.”

Bitch. I was totally not even stuck this time. 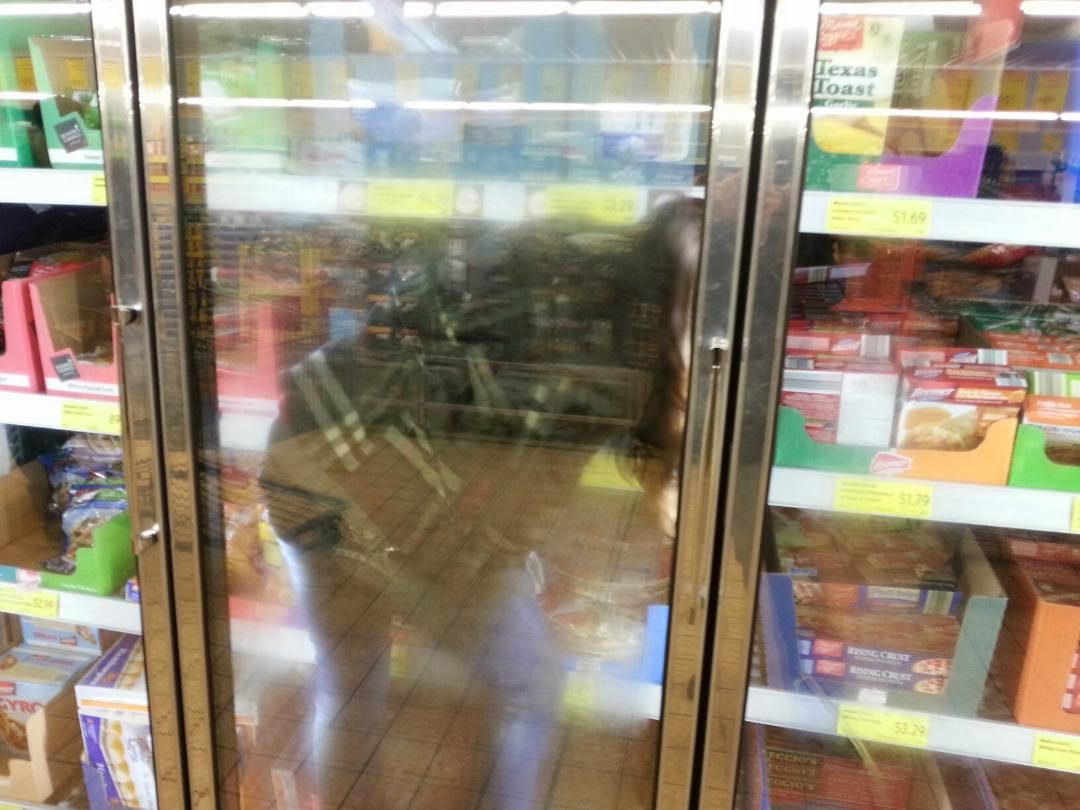 In fact, in my defense who the hell knew that they now make gluten free hot pockets!? WHEN DID THAT HAPPEN? There was only one gluten free pizza hot pocket left and it was waaaayyyy in the back and I WAS GOING TO GET IT.

If I had been thinking, I would have realized that instead of getting entirely inside of the cooler I could have just taken the boxes out that were in my way.

Thankfully that thought did eventually occur to me. 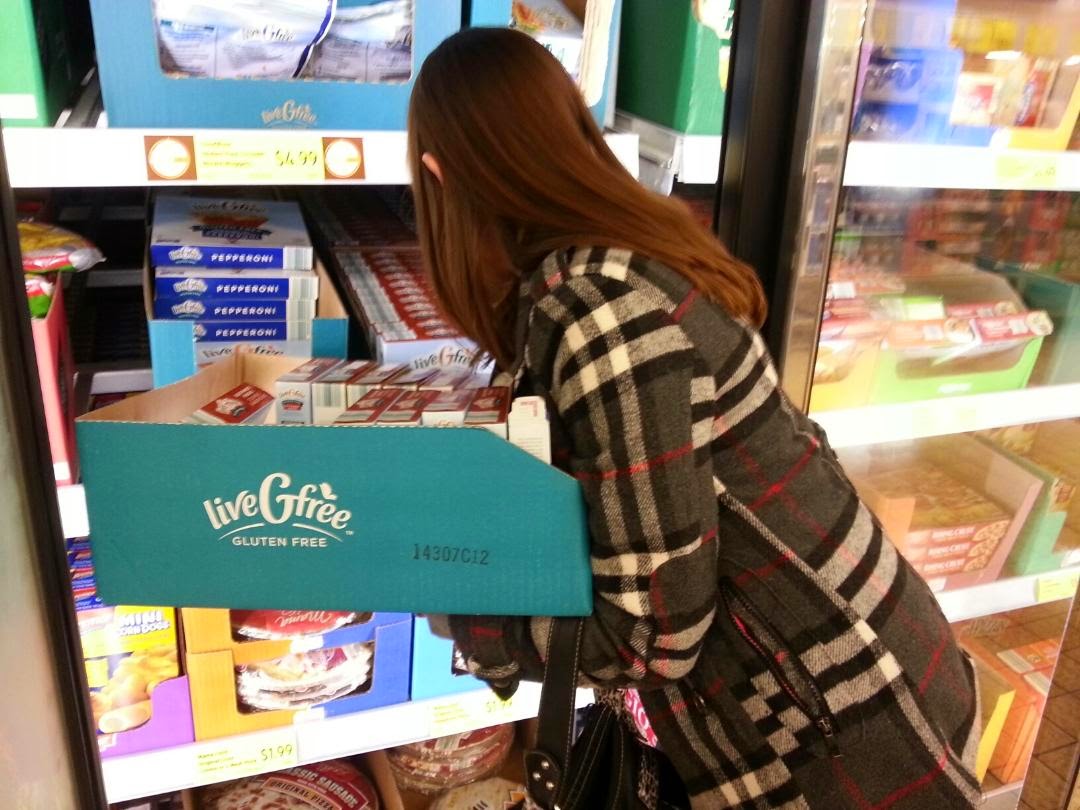 P.S. I also now remember why I stopped eating hot pockets. They are kind of creepy, like the hot food at gas stations. Overly warm, extra chewy, and filled with a type of cheese you can’t recognize.

None of that though was as strange as when she walked up to an old man and told him that he smelled nice. True story. I wish I were making this up, because maybe then the guy would not have followed us around the store for the next 25 minutes. Not just followed us, but actively engaged with us, fully convinced that Frisbee Boy’s Mom did not just want to know what cologne he was wearing, but that she actually wanted to drag him into a cooler and bang him among the hot pockets.

It was so bad that when we got out of the store she actually uttered the word “run” and then sacrificed me by asking me return the cart.

We literally ran from a man using a walker. Every time I think I have hit my all time low, I find a new and creative way to lower the bar a little more.

Word of advice, don’t tell elderly people they smell good. I think that was the most action he had gotten in a really long time.

I’m not sure if I will shop at an Aldi again because a lot of the food actually scared me, like the shelf stable bacon. 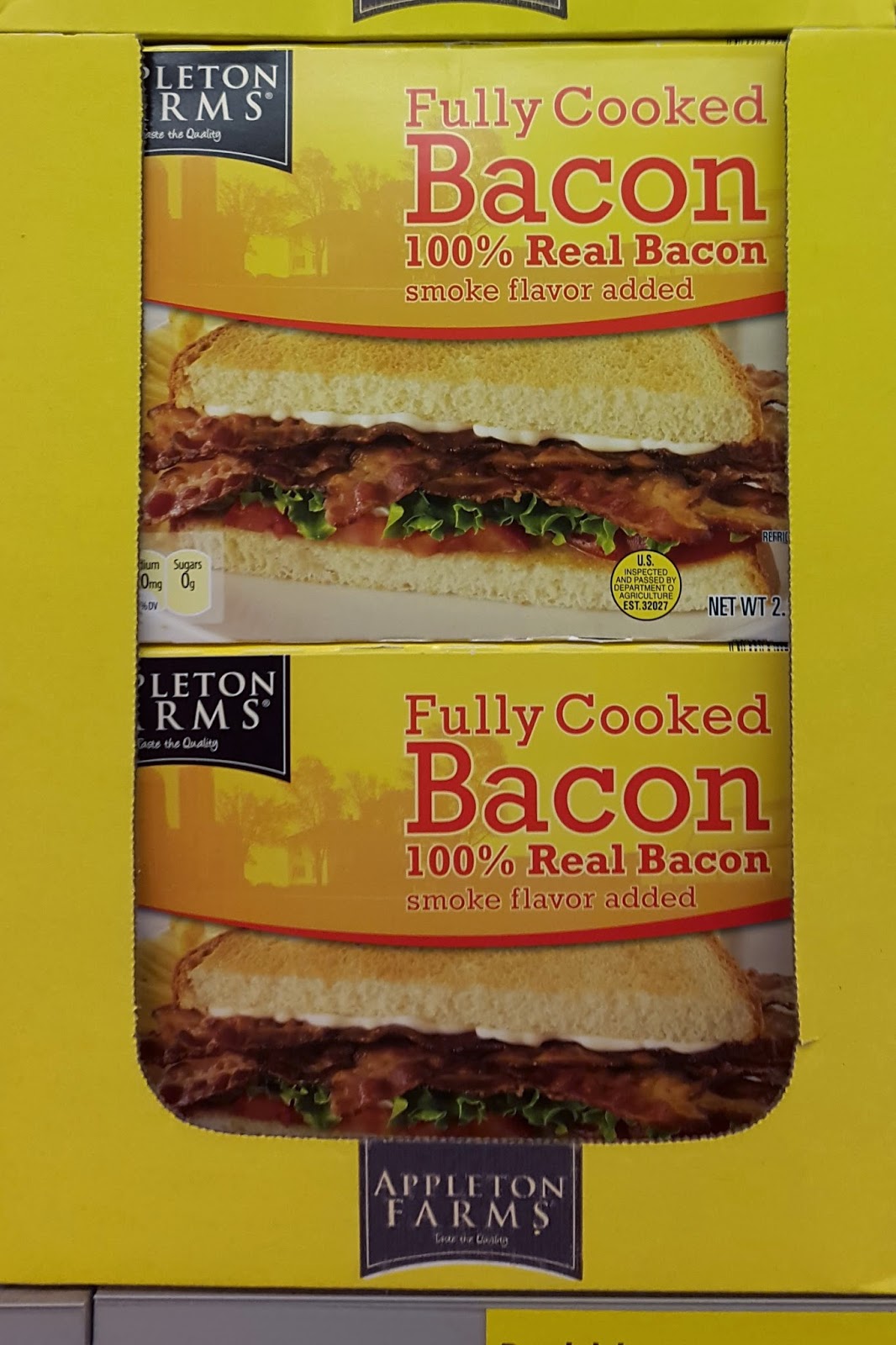 Found these babies on a shelf in an aisle. What exactly is it? Like a giant bacon bit?

Although if I were throwing a party I may head back to pick up a few things.

But all of that aside, over the course of the last year I’ve come to realize that having a surrogate mom is better than a free vajazzaling or a stranger-danger-lesson about senior citizens, it’s knowing that she chose to love me not because she had to, but because she wants to. She has consistently shown up during the times when I didn’t even know I needed her (which you can read about here), the times when I was falling apart, and she was putting me back together for no reason other than the fact that she cared. 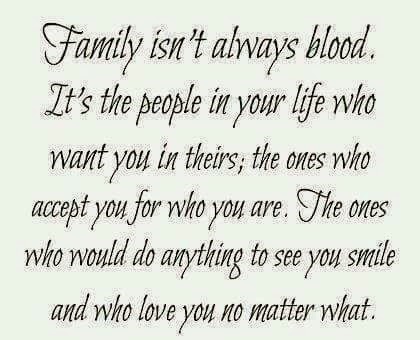 Sent to me from my Frisbee Boy’s Mom

And is she my real mom? No, she isn’t. I’ll never be a true part of her family and I don’t expect to be, but what she is, is someone who is teaching me what it means to be cared for. She is teaching me to open up a little bit and to allow me a safe space to learn how to count on someone other than myself, and that is exactly what a mother does.

She is part of an awesome group of people who love me with the kind of love that my parents failed to teach me.

I’ll never have a real mom, that one person who I should be able to count on for everything and anything that I need, but I’m blessed to have a lot of people who are teaching me, each in their own way, what it means to be cared for. So this Mother’s Day, while the father of my children won’t be thanking me, and I won’t be be celebrating the woman who brought me into this world, I’m celebrating a lot of people who are teaching me how to really live in this world.

And with that I’d like to wish a very happy Mother’s Day to all my blog readers; mothers of all types, children without mothers, women struggling to become mothers, and readers of every space in between. All of you; your comments, your praises, your advice, and yes, even your critiques, you have all played a role in teaching me more about myself this year, and because of that I’m not going to be sad today, I’m going to be thankful. Thankful for my children, my new found family of friends, and all of you who have consistently proven that you have a vested interest in my life.

I’m happy that you are all here, and I’m thankful for all that you have done for me.

You are all very dear to my heart, 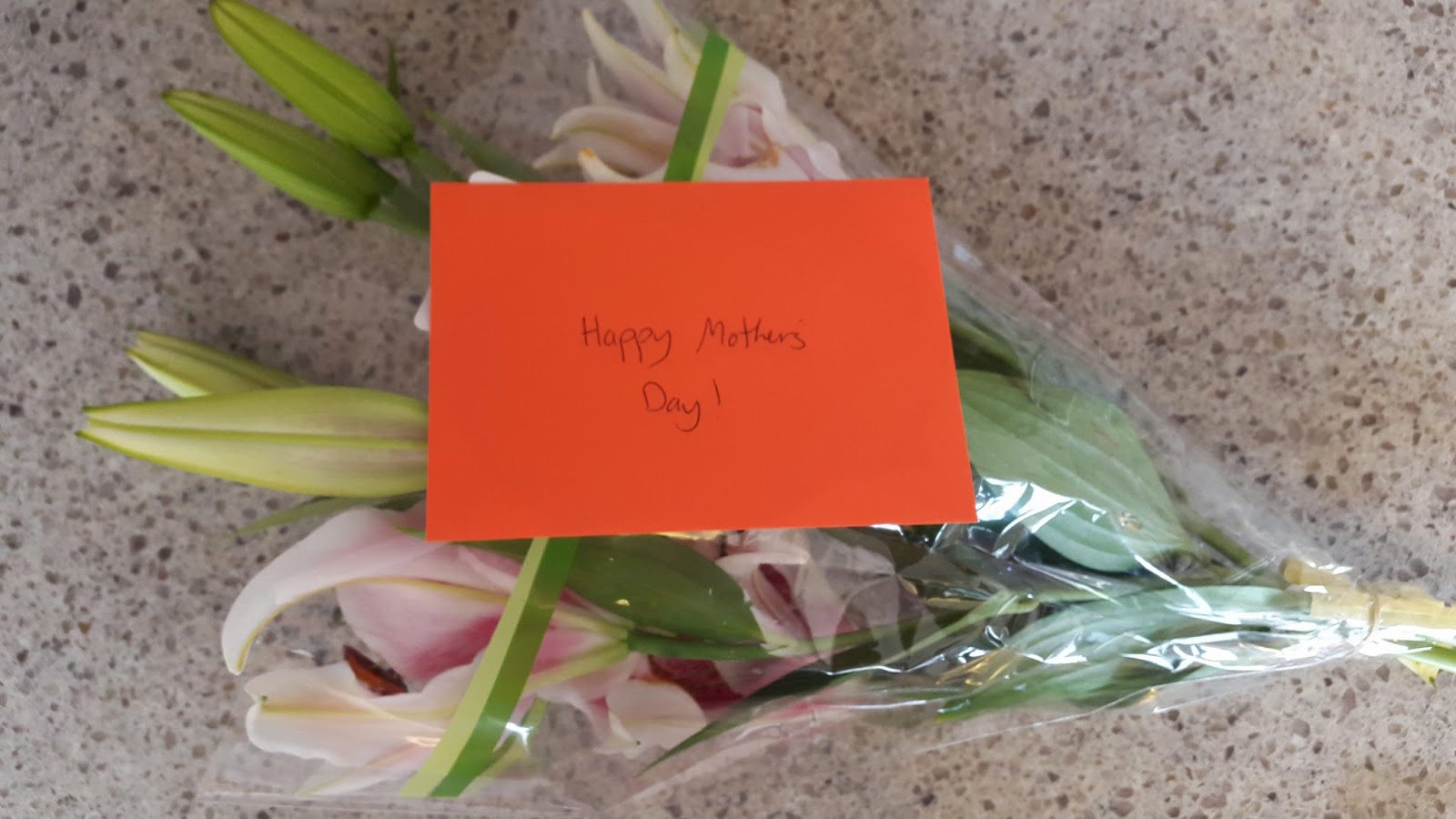 If You Liked This, Read These!