A couple weeks ago I was lying on the couch, a glass of wine in hand, and I was watching the movie “The Lincoln Lawyer.” There’s a scene in that movie where the main character — the lawyer — is in his car when his client pays him using a large envelope of cash. I found myself giggling because you can’t get anymore straight edged when it comes to how seriously Mr. Attorney Man takes his career and his license (rightfully so), so the thought of him handling a business transaction out of the back of a car was kind of funny.
I like funny.
I drank a little more wine, laughed a bit more to myself, and when I went to bed that night an idea was already rolling around in my head as I thought about the money that I was supposed to be paying Mr. Attorney Man the very next week.
Oh what perfect timing!
Are you getting excited yet?
I was.

The next morning I woke up and texted Frisbee Boy’s Mom, to ask her if she had a pop top style briefcases that I could borrow. She did, I did a happy dance, and then it was off to the bank.
The converstation between the teller and I went almost exactly like this:
Me to the Bank Teller: Hi, I’d like to withdraw that $2500 check that I just put in the bank a couple days ago.
Bank teller: Then why did you put it in the bank? (Remember, I know the bank staff pretty well so this wasn’t as unprofessional as it seems. You can read about them here and here).
Me: Because I like to make you work for your paycheck.
Bank Teller: (Dramatically sighs) How would you like the cash back? And no, we still don’t have any of those large cardboard checks that you asked for last time.
Me: I’d like it in singles please.
Bank Teller: Cash?
Me: Singles.
Bank Teller: Singles?
Me: Yes, the currency with the number one on them.
Bank Teller: We don’t have that many singles here.
Me: You are a bank, right? So now you don’t accept coins and you no longer have singles? What the hell kind of bank is this? I sort of feel like you are attempting to weed out the poor people.
Bank Teller: I can order you some singles.
Me: You, the bank, the place where money lives, has to order me money?
Bank Teller: Yes.
Me: Ok, I’d like to place an order for 2500 singles.
Bank Teller: If I order these, are you actually going to come get them?
Me: Oh, so what, now I’m poor and irresponsible?
Bank Teller: Fair enough. How would you like them bundled? In stacks of $500 or $100?
Me: How about in stacks of $10.
Bank Teller: I can order you the bands but you will have to bundle them yourself.
Me: In that case, stacks of $100 are fine.
Bank Teller: Ok, I have to ask, what are you doing with so many singles?
Me: It’s going to be a GREAT weekend!!
Bank Teller: Eden, what are we going to do with you?
Me: You know, a lot of people have tried to figure that out and so far no one has. Let me know if you figure it out though and I’ll pass along the message.
************************
Two Days Later I got word that my singles had arrived at the bank and so I headed in to pick it up.
Bank Teller: Here’s your money Eden (slides a few HUGE stacks of cash across the counter to me).
Me: (Stands there for a minute). “Um… do you happen to have a bag? I didn’t plan that far ahead and I’m not really down for leaving the bank with literal armloads of cash.”
She gives me a bag and I run to the car, certain that I will be pulled over on the way home and my dashboard will be ripped apart as the police search the car for drugs.
Thankfully that did not happen.
What also did not happen was the super cool pop top briefcase because Frisbee Boy’s Mom wasn’t able to find it in her house, which is the reason why my Platonic Hubby and I found ourselves in her classroom one afternoon trying to figure out what we could Google on her work computer that wouldn’t get her fired.
Me to my Platonic Hubby: We need to figure out how to do the hand-off in a way that seems shady. That will be so funny!
Her: He’s going to kill you.
Me: I know right? It’s going to be awesome. I can’t decide if he is going to be angry or laugh, but even if he’s angry tomorrow he will laugh eventually so I’m good with that. In reality he should thank me for giving him one of the best stories that he will ever be able to tell people. Plus, it’s not like the bank is just going to take his word that $2500 is in the bag, they are going to count it which is also kind of funny. Some poor secretary or something should take herself a book and a snack to the bank.
Her: You’re so mean.
Me: I know.
Her: Alright, so… shady… what should we look up? Ways to smuggle cash?
Me: I’m not sure your corporate office is going to want that in their search history (remember, we were on her computer at work).
Her: HAHAHAHAHA. Um… ways drug dealers carry cash? No… that won’t look good either. Ways to pack cash? No… Geez, what can we look up? 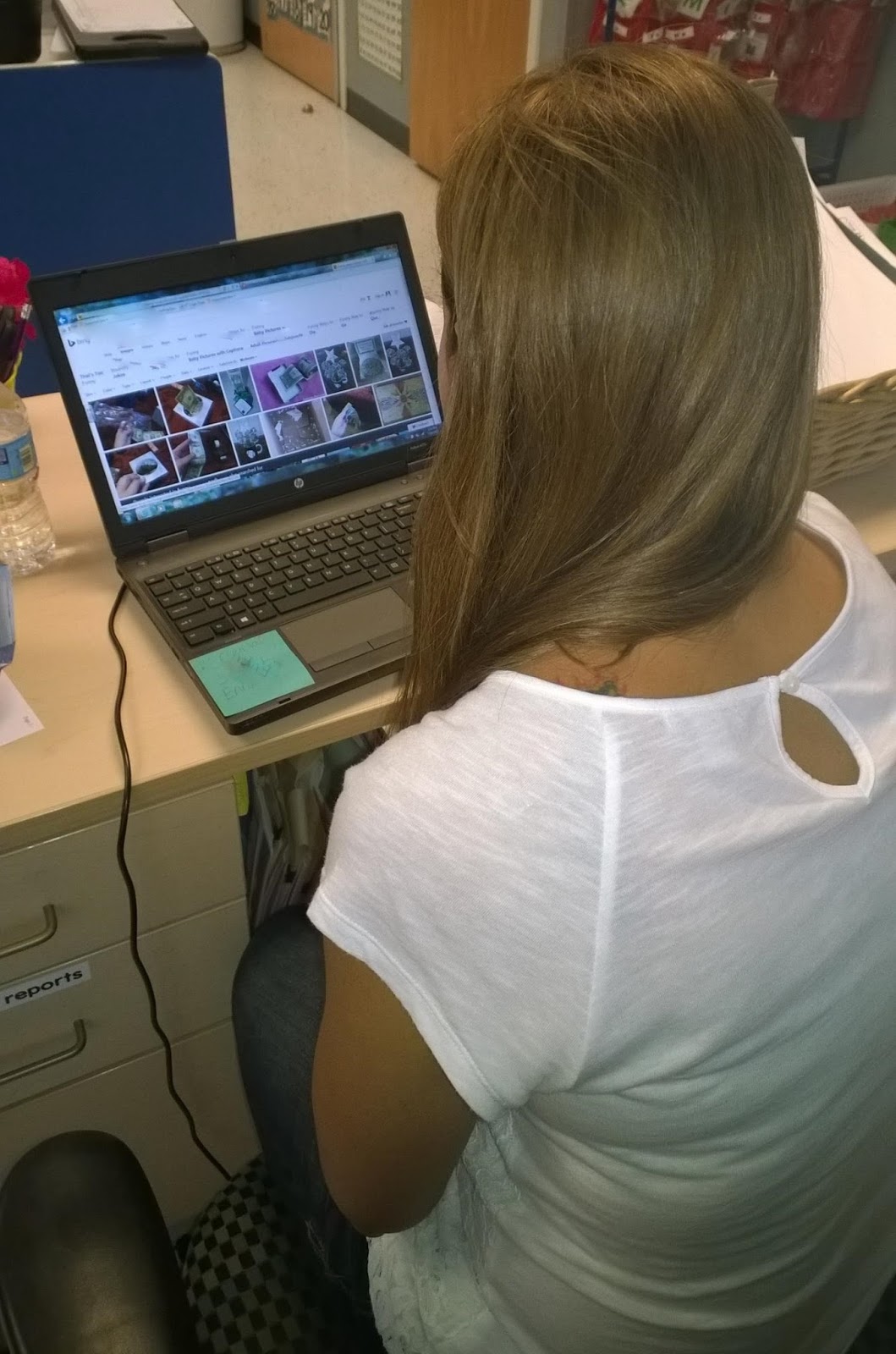 I can’t even remember what we ended up searching but all we got was a bunch of Pintrest ideas on how to tie all the dollars to a tree.
Although, now that I’m thinking about it…. wheeling a literal money tree into his office would have been pretty epic…. (Note to self: bank the money tree idea. No pun intended)
In the end we abandon the computer and started scavenging her classroom for things that would make excellent smuggling materials.
We came up empty.
I’m telling you, a Kindergarten classroom just really is not the place to go shopping for faux crime materials. We chatted a bit more and finally decided that either a duffle bag or some plastic cases that we had found would be the way to go.
Here I am “practice packing” the money later that night and talking to her via text.
I’m the peach bubble. 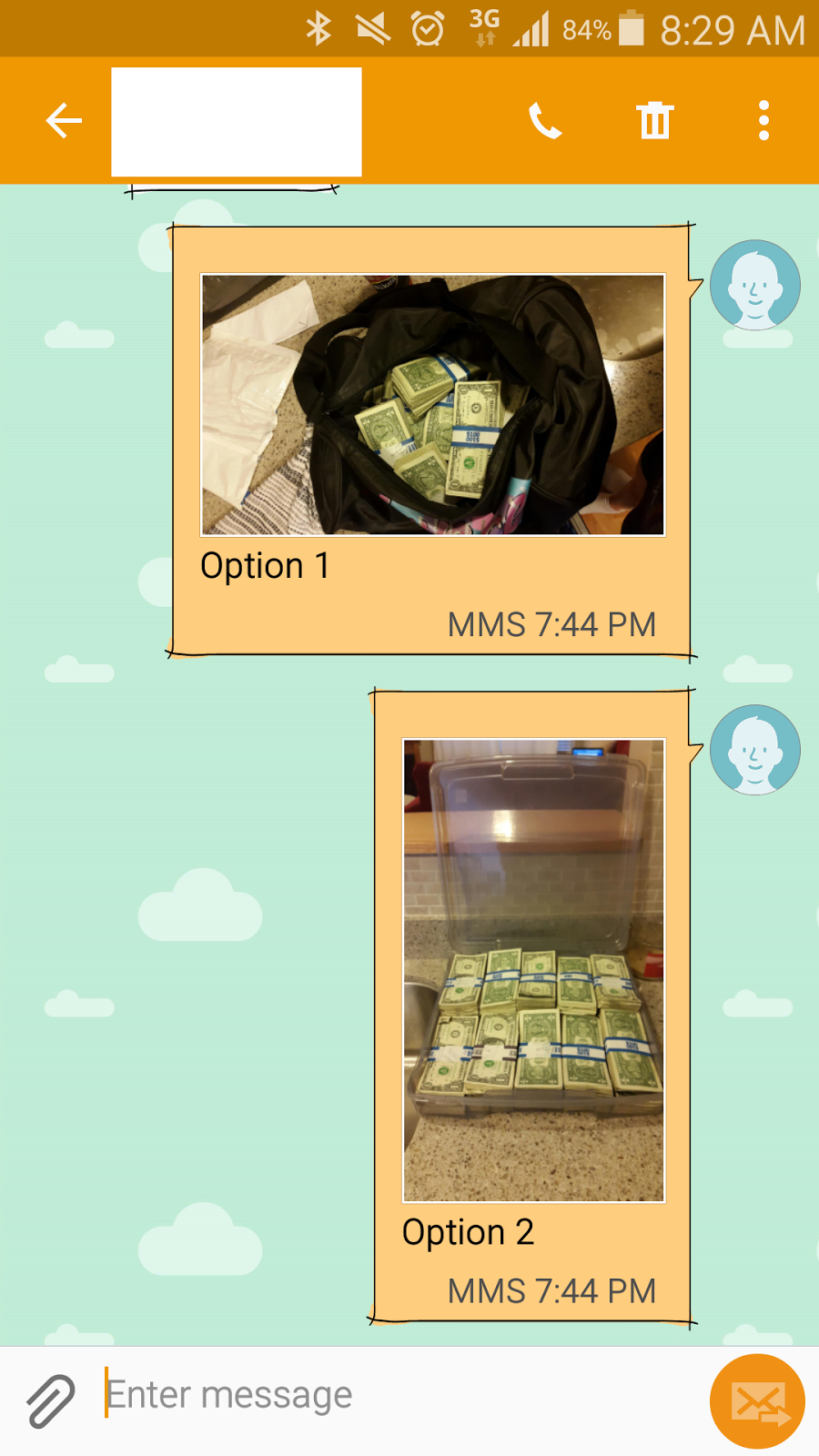 She then told me that she liked the duffle bag better, which was perfect because so did I. 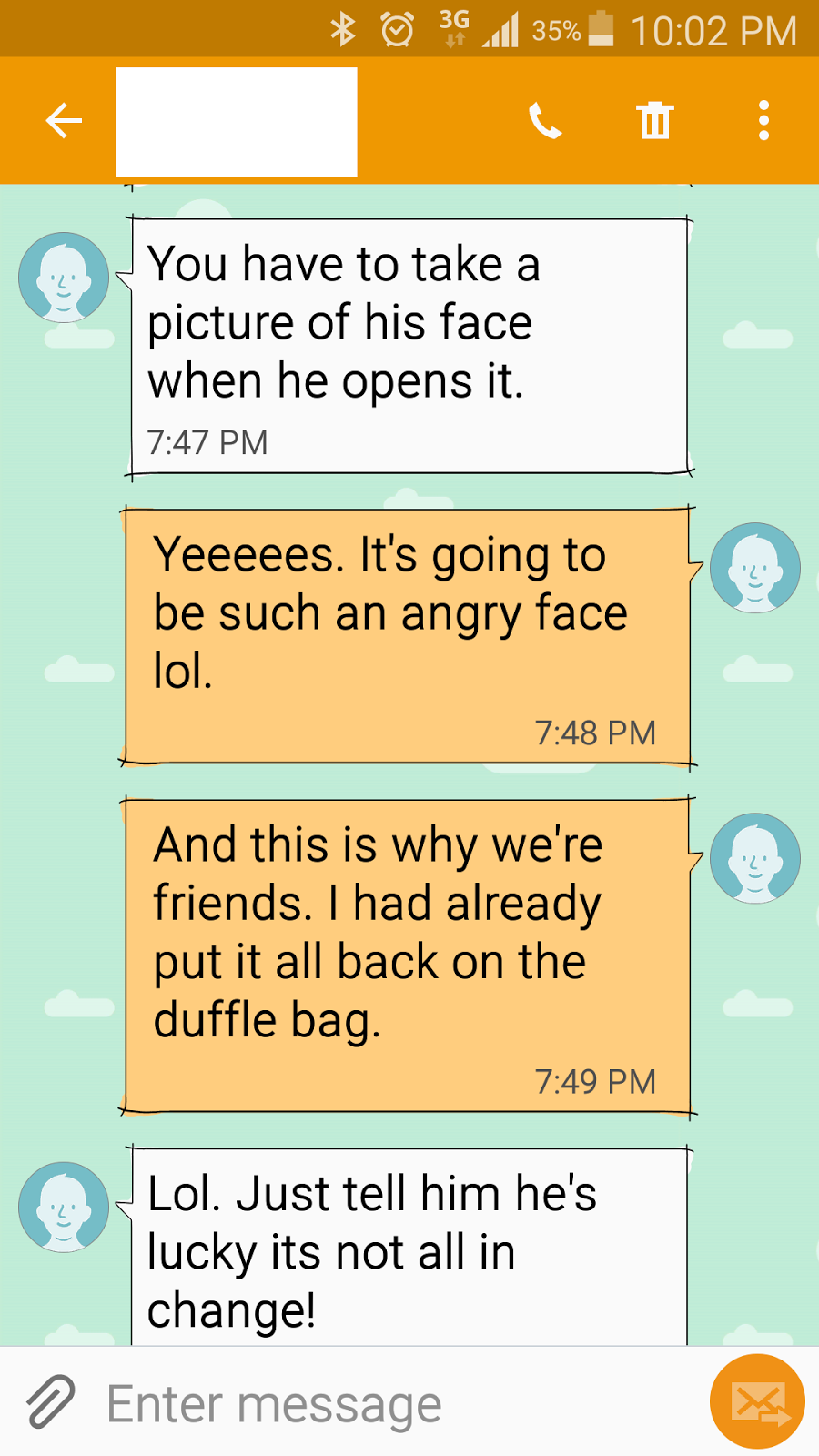 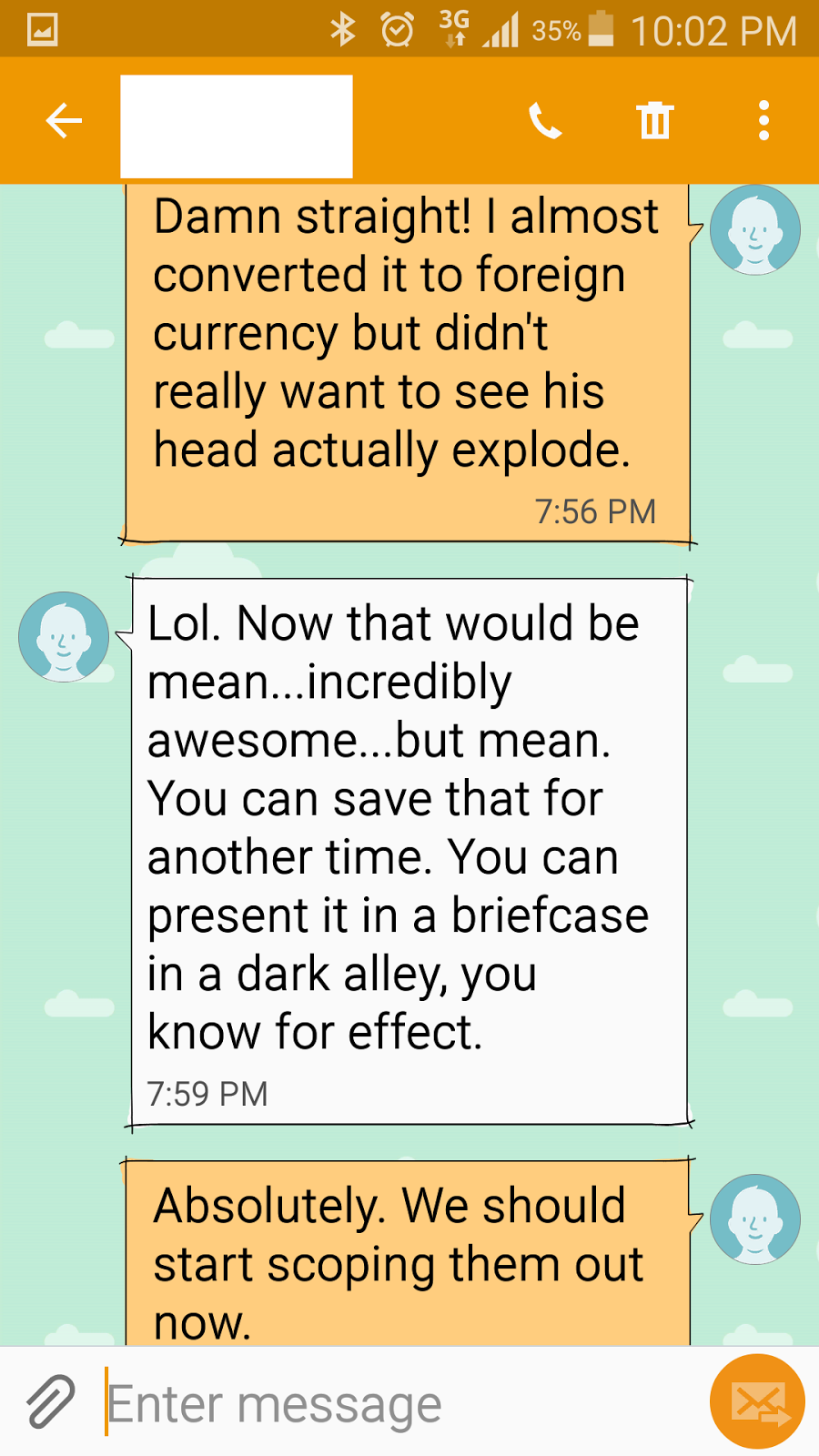 The next morning I set out to meet Mr. Attorney Man for breakfast. I got there first so I waited for him in the parking lot, and when he arrived I simply said “Oh here, let me pay you before we go in” and handed him the bag.

Mr. Attorney Man: What is this?

Me: Money. You said you take cash.

Mr. Attorney Man: This is all cash? 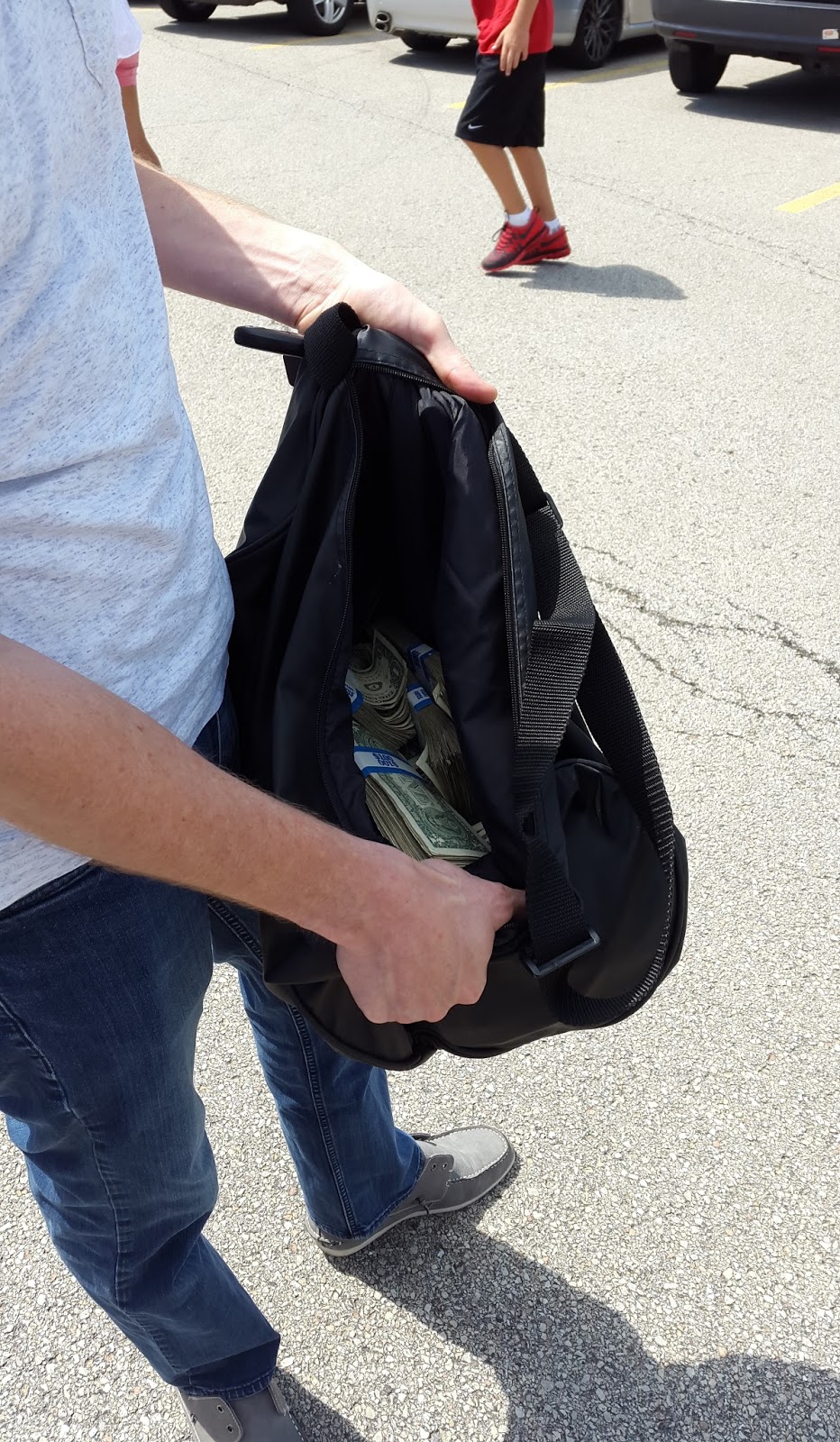 Me: Well, I figured that as an attorney part of why you got into the business was for the ridiculous amount of money you could make, and since you write off most of my bills I thought I could at least give you the opportunity to… I don’t know, roll around in some cash or throw it up in the air or whatever you were dreaming about when you chose this career. Also, I’ve always wanted to be involved in a parking lot transaction with a duffle bag full of cash, so I hope you don’t mind that you are a mere pawn in me being able to check this off my bucket list.

Mr. Attorney Man: My boss is going to kill me.

He then put it in his car and that was that.

Well that was decidedly less fun than I was hoping for. About the only thrilling moment was when a cop car rolled up DIRECTLY next to us in the parking lot, slowed down, looked at us, the two of us then looked at each other holding a large bag of cash, and we laughed at the irony as the cop thankfully drove away.

I will say though, when Mr. Attorney Man texted me a few pictures later I was able to rectify how awesome my plan was with the story I made up to go along with his pictures: 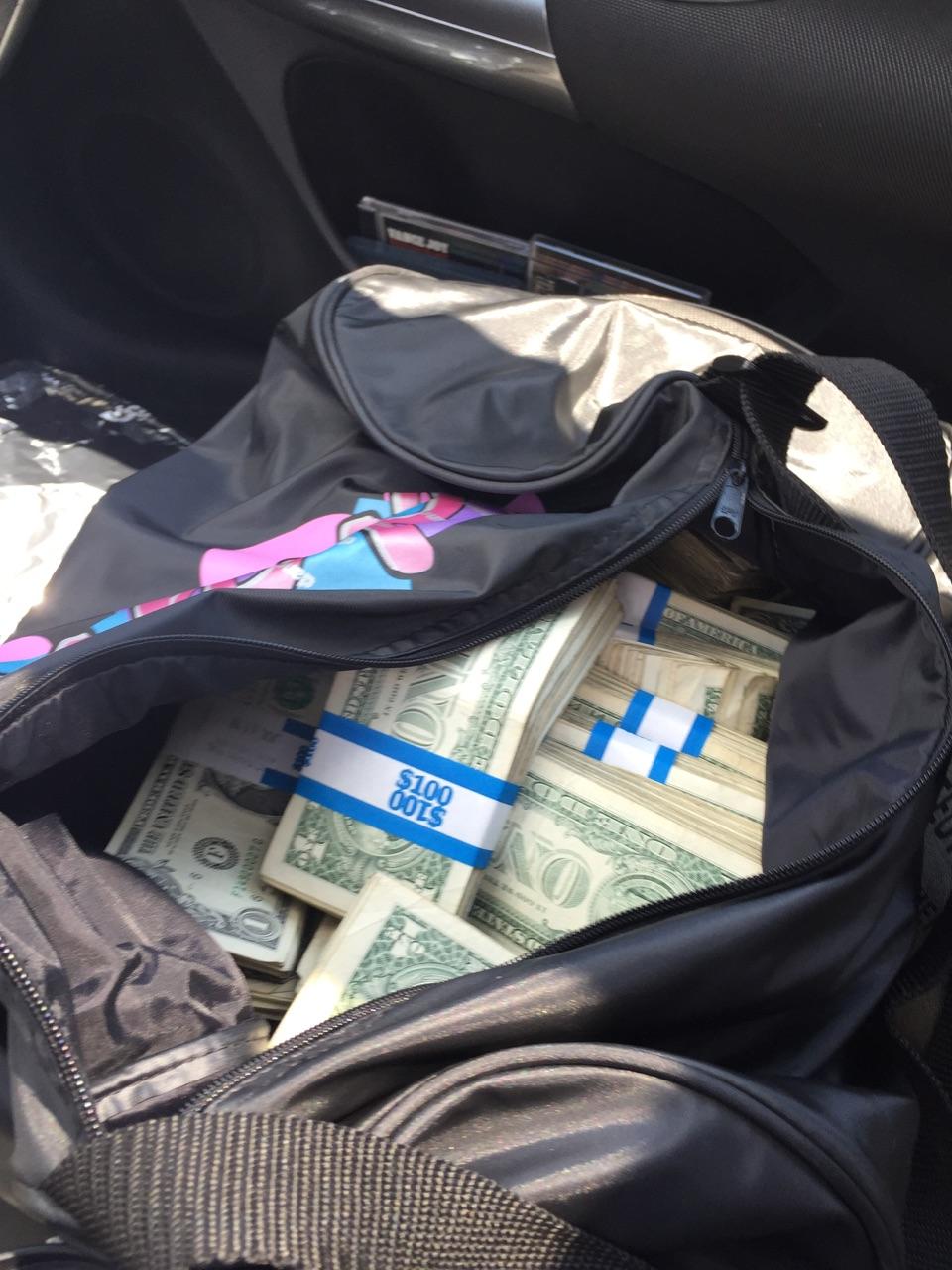 See that one? It was taken in his car. I’m going to assume that he took the picture after he left to send to his girlfriend or his friends and say “someone just paid me with a bag of cash.”

Do you know why he would do that?

Because this is totally a story that you tell people!

Speaking of other people, here’s a few pictures that he texted me of his boss checking out my payment. Apparently his boss made a big pile of cash… 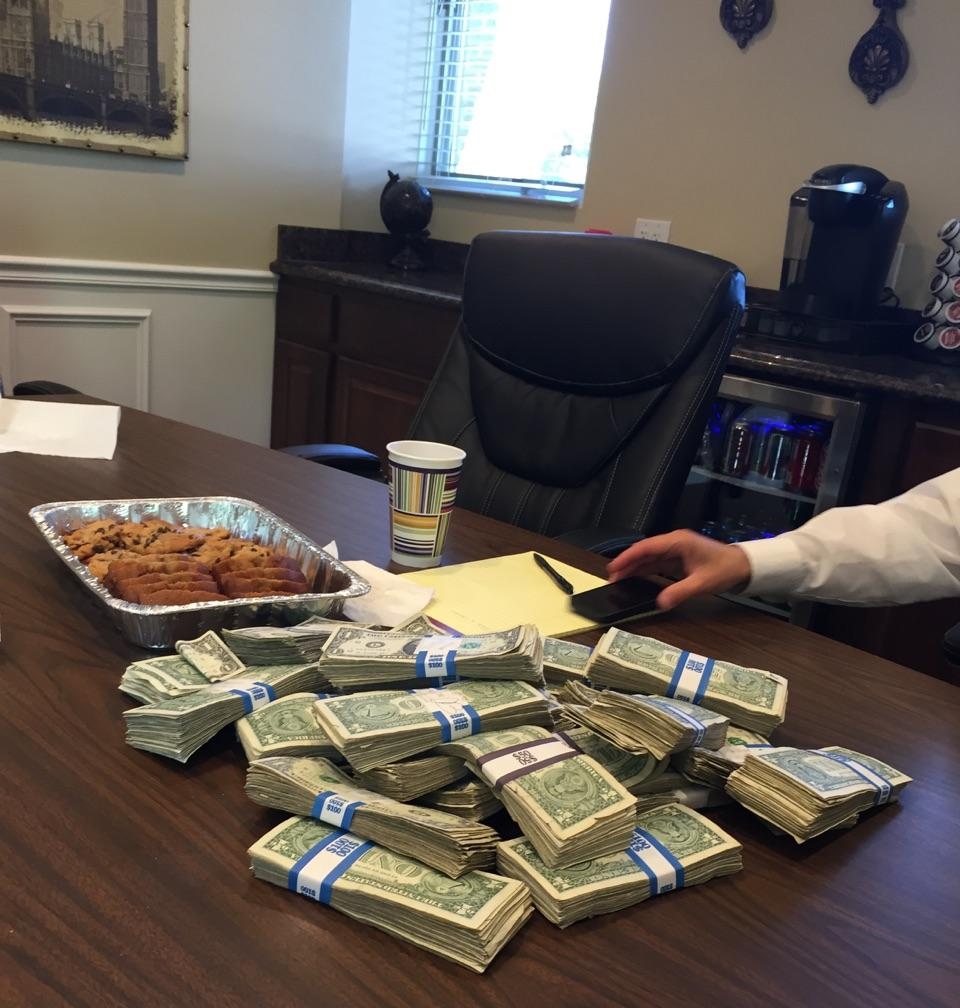 Followed by a large stack of cash… 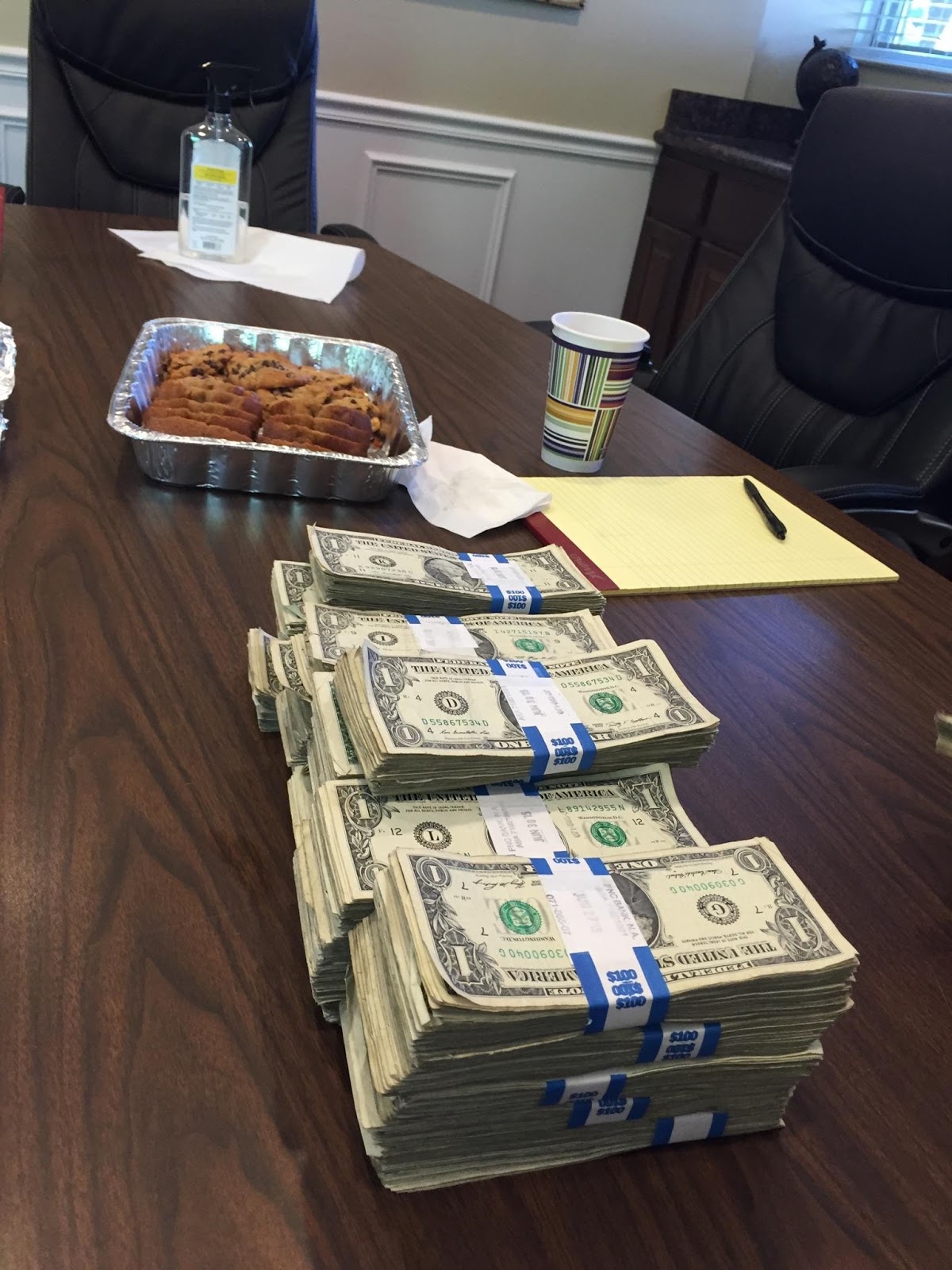 …And then deduced that his bank was going to think that he was crazy.

I can live with that.

I guess some plans just seem funnier in my head than they are in real life, which, you know, isn’t unusual for me.

Oh well, onto the next victim.

Another Look Inside My Phone

A Dance Recital (Fiasco) Update And A Bit Of Bad News