So… I’m about to make fun of my husband, but it’s OK because he gave me permission.

Source: Gipy.com
Sunday night (or rather, Monday morning), I was awoken from a dead sleep by the sound of my husband breathing rather heavily. Trying to figure out what was going on, I leaned over the pillow that had made its way between us, and saw that he was lying on his back, and beginning to hyperventilate.

My first thought was “he must be having a sex dream!” but as his breathing quickened and his face began to reflect panic, I realized that he was actually having a nightmare.

Source: Giphy.com
I’ve obviously known this man for a while now, and I can honestly say that aside from the time he had to call an ambulance for me, I’ve never seen him afraid of anything. So, seeing him scared totally freaked me out.

“Babe, babe!” I said while shaking him gently, and before I had a chance to get the third “babe” out, his eyes FLEW open and he gasped for air as if he had been drowning.

In turn, I about jumped out of my skin.

“Nightmare” he said bluntly while still half asleep.

Not wanting to embarrass him yet, I sunk back down onto my own side of the bed and waited for him to answer. There was a long pause, and then in a quiet voice, he said “alien was chasing me.”

I remembered that before we had gone to bed, I had shown him a movie trailer for an alien movie that I wanted to see. Sure that was the culprit, I asked him “was it the alien from the movie I showed you?”

Then it was his turn to giggle. Then he giggled some more. And then through some fairly hearty laughter, he said “no…. it was the alien from ‘Mac and Me’.”

I erupted into laughter.

I mean literally, I basically exploded.

Oh my gosh, have any of you seen that movie? It is some goofy kid’s movie from the early 80’s, about a baby alien that gets lost on earth, and the children that find him and try to get him home. My kids had been watching it earlier in the day, because it is perfect for ages 5-8.

In the dark, the two of us started laughing so hard that I actually had to make my way to the bathroom because I wasn’t sure if I was going to vomit or pee on myself. Then, after I returned to the bed, even though it was three-thirty in the morning, neither of us could fall asleep because every ten minutes one of us would start laughing again, and then we would both burst into hysterics.

Oh gosh, it was SO funny, and naturally, I had to bring it up first thing the next morning. And, since I like you guys, I’m going to give you a glimpse at what a terrifying alien Mac is.

**** Warning, I am about to post pictures of a terrifying alien, and if any of you are prone to nightmares, you may want to skip this next section ****
Set Stage: The Guy left for work before I woke up, so he messaged me to tell me good morning. Being the sweet wife that I am, I proceeded to send him several GIFs of the super scary alien.
I am green, and he is gray. 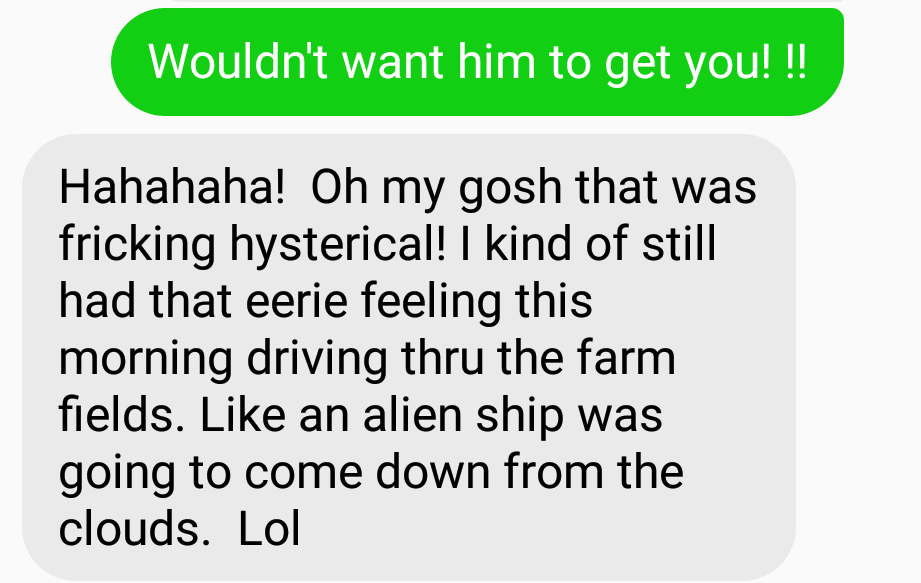 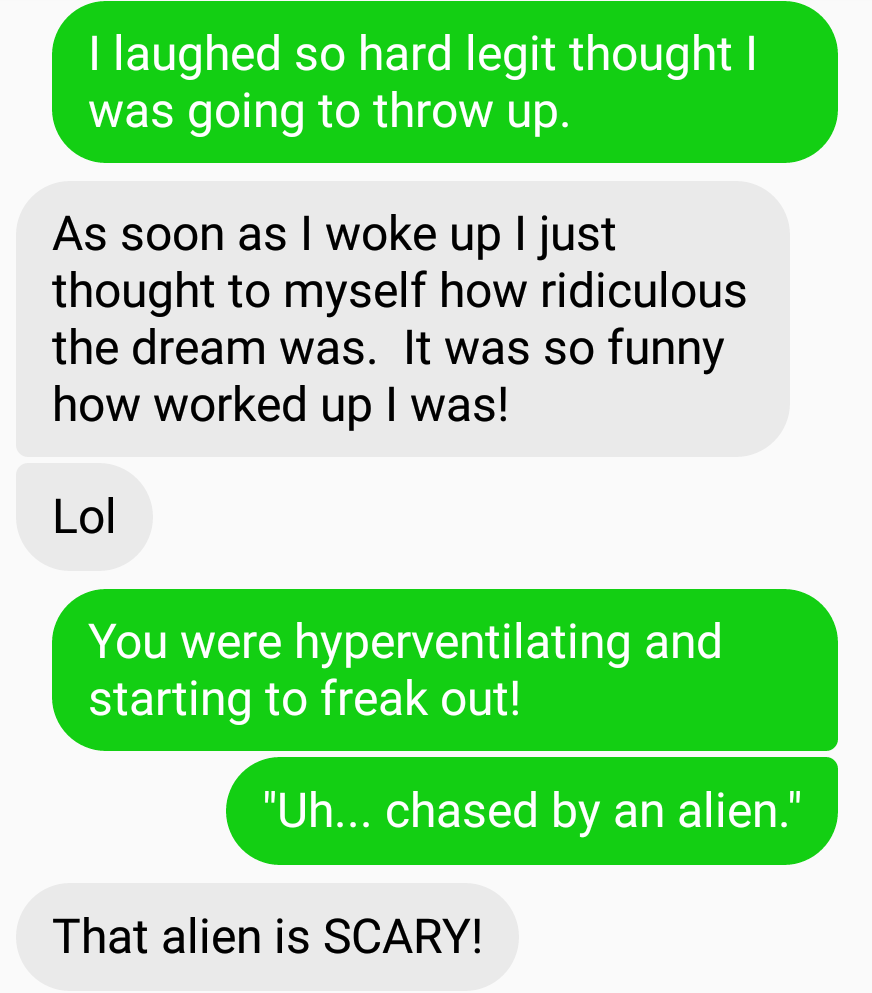 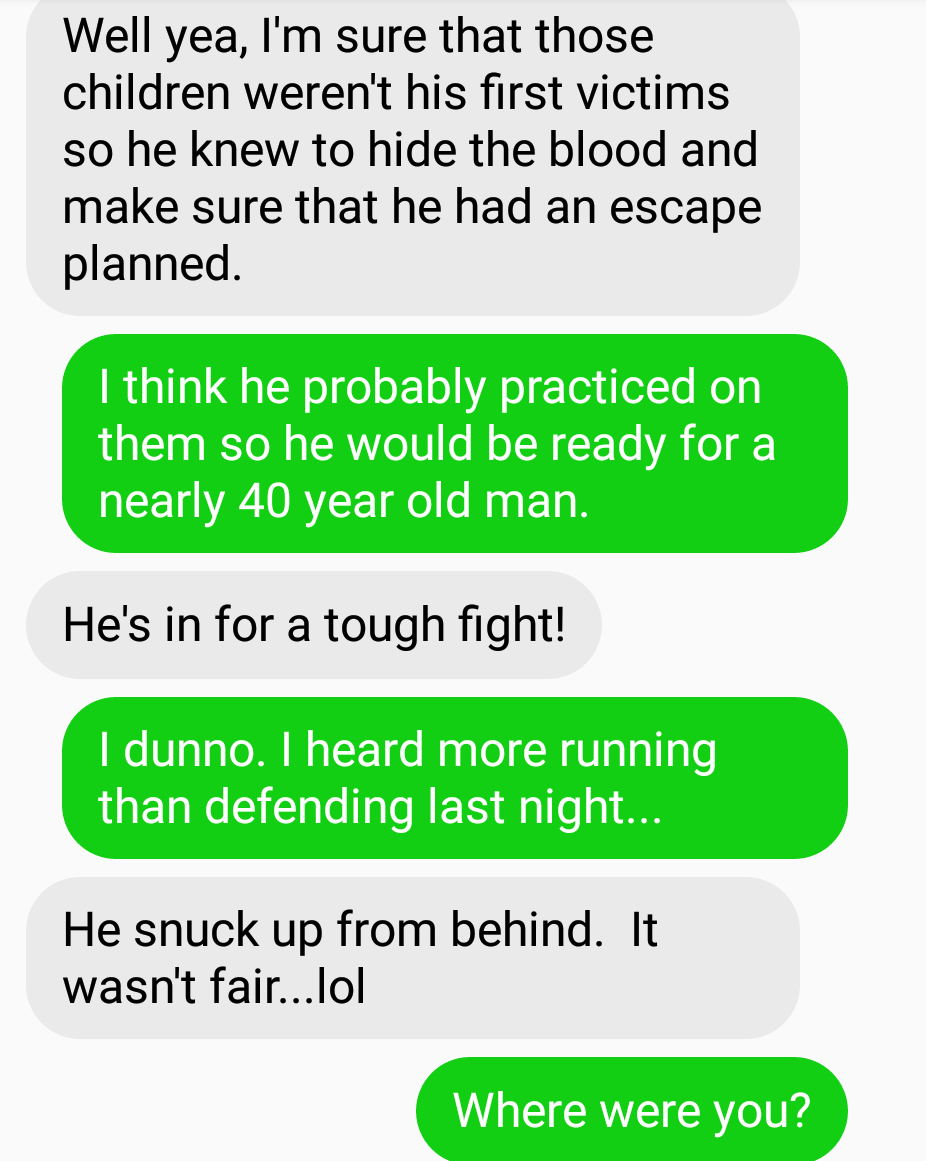 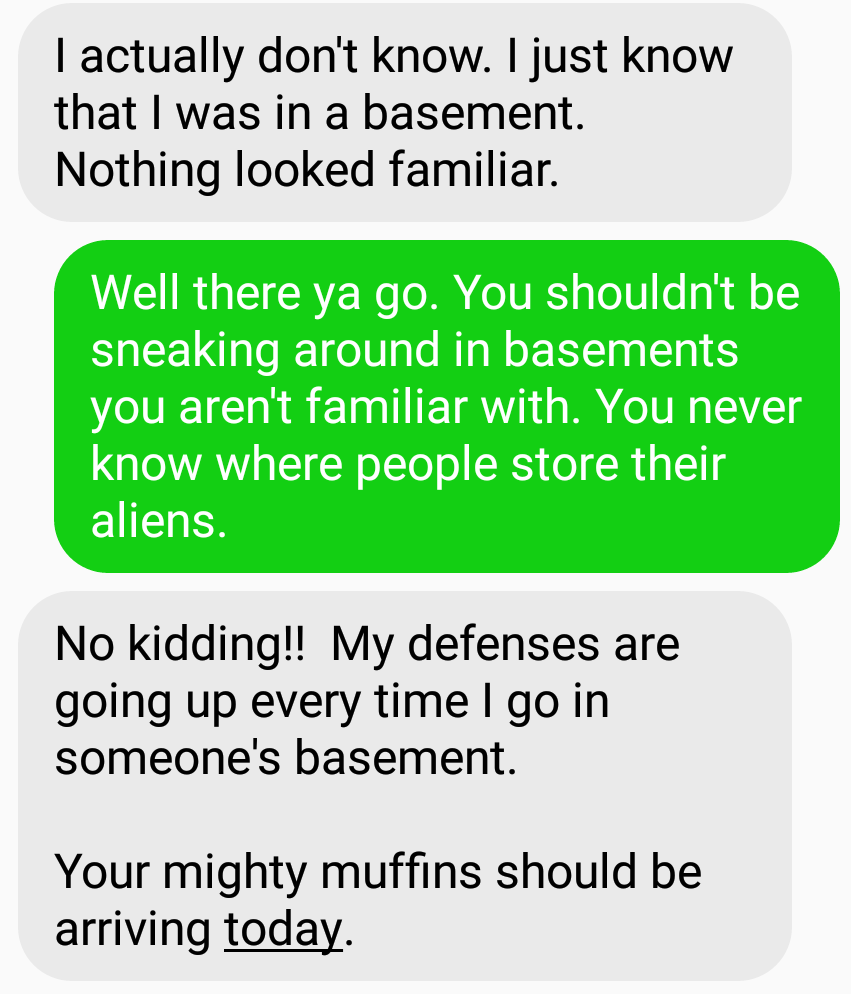 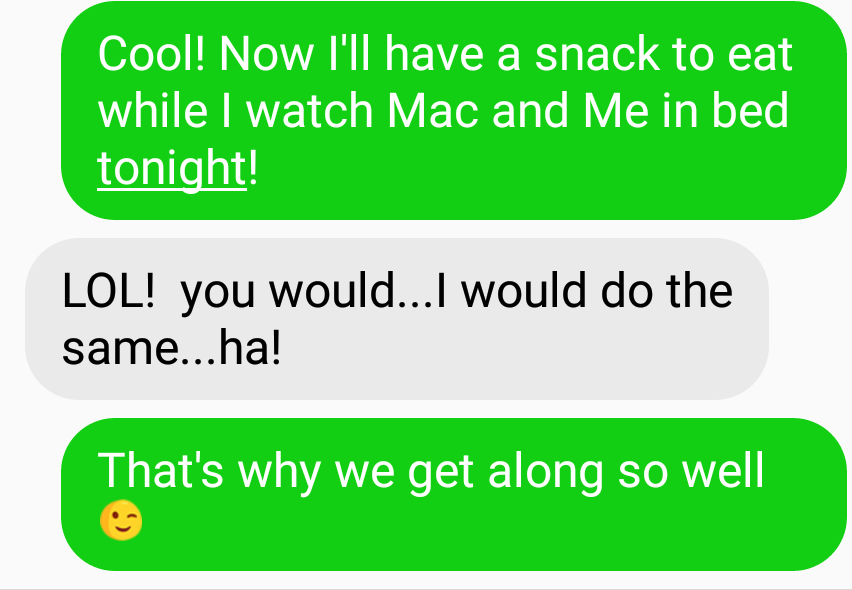 So anyway, yea. That “Mac and Me” movie… apparently it’s terrifying to 40 year old men.
Although who can really blame him? The special effects alone are enough to give someone nightmares…

Source: Giphy.com
P.S., I just let The Guy read this before I hit post, and he said “oh man. Well, I’m glad I could make you laugh. Honestly, it was so fucking stupid I can’t stop laughing.”
Good man, that one. Even if he is terrified of a children’s movie….
Tags: The Guy
Newer Posts

It Was Always Meant To Be

Please Pray For Us