Yesterday I Flipped The F**k Out

*Warning, there is a lot of swearing in this post* Please also note, my children were at daycare. Thought that was important to throw in there….

I flipped out yesterday. No, I didn’t just flip out, I FLIPPED THE FUCK OUT.

I can honestly say that I have never felt so angry in my entire life. This was the first time I have ever gotten truly angry over something that had put me in the “victim” category. I don’t usually get angry. I am usually able to look and feel past the anger and admit to whatever feeling caused me to feel angry in the first place (remember the post about anger being a powerful secondary defensive emotion to a primary feeling?). I usually have no problem admitting to whatever vulnerable and hurt feeling I am experiencing, and therefore avoiding the feeling of anger altogether.

I made it through my hellish childhood into adulthood without killing either of my parents. Be proud. I managed to respectfully disown them without flipping out. My husband walked away from me and nonchalantly cast my children out of his life, and still I never raised my voice at him. I pretty much just cowered away from him court. Hell I even nicely packed up all his belongings when he left, and put them outside when he asked me too. I made it through the torment that my brothers rained down upon me when I disowned my parents without freaking out. When one brother told me to go drown (kill) myself  and do the family a favor, I decided that the last words I would ever speak to him would come from a place of love.

When the man after my ex, the man that I thought I would be with forever, told me that my kids and I had been thrown out like trash and he wasn’t going to be the garbage man that picked us up, and then proceeded to moved out of my house the night before my 30th birthday, I freaked out and made some crazy phone call to my attorney trying to figure out what to do as he moved his, and my, belongings out of my house, yet I never raised my voice towards this man. Heck, even after the two nutcase neighbors threatened to run me over with their car when I had the audacity to ask them about the money they owe me, I still shoveled their driveway. I have a very long history of being able to control my temper, probably because I really don’t have a temper. Until yesterday that is. Yesterday, I lost it. I lost my fucking mind. 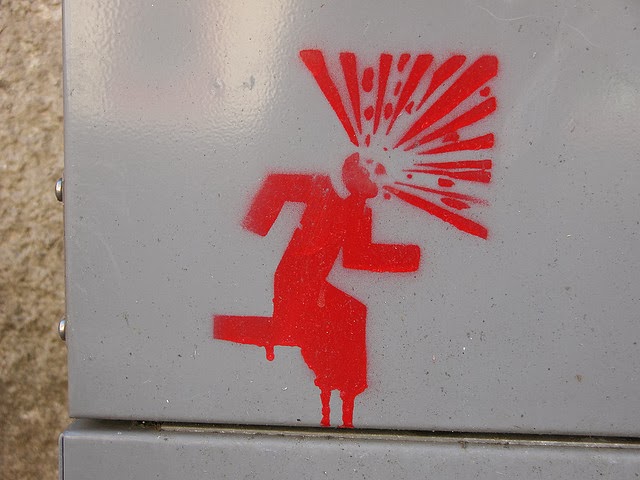 I was making phone calls and setting up meetings for my not-for-profit when I was transferred to the social worker that had previously been involved in my stalking and rape case. I have talked to this woman quite a few times, and never really gotten anywhere with her information wise. I don’t know how many of you have read my most recent XOJane article, “I regret reporting my rape,” but if you haven’t I suggest clicking on that link and reading it before you read the rest of this post.

Remember how I said that the rape had finally broke me? Like I had said in the “How It All Began” post, it had all just been too much, for too long, and I finally broke. Yet even then, I still never felt angry. Hurt, betrayed, scared, dirty, humiliated, worthless, overwhelmed and under loved, but never angry.

In the weeks prior to the rape that broke me, I had been stalked relentlessly by my ex and the stranger man. I made phone calls in the double digits to every place I could think of that might be able to help me. Eight trips to the police station. Two calls to the states attorney’s office. A meeting with the police chief and my attorney. 911 calls that went unanswered. An order of protection. I was getting no where, the message of “we don’t care” was coming across loud and clear, and yet, I still only felt scared and hurt. Frustrated for sure, but not angry.

When they all failed me, and I was brutally raped, I still did not feel angry. My heart broke for the women that I knew would be following in my footsteps, enduring the same things I had. I wanted to protect them from what I had gone through. I wanted to make a change for them by founding my not-for-profit, but for myself, I never really sought justice. I didn’t feel angry. Irritated yes, but not truly angry. I never felt like I needed justice for myself, I just wanted to help other people.

So anyways, yes, I regret reporting my rape. Big time. The whole thing was so grossly mishandled by the authorities that it is laughable. I knew that it was being handled wrong, but I was so broken at that time, that I couldn’t feel anything but the pain and despair of being raped. I was dealing with so much inner turmoil then, that dealing with police misconduct was so far out of my capabilities that I just shoved it down. I don’t think I realized how much I shoved it down until yesterday when it came roaring to the surface and I FLIPPED THE FUCK OUT.

The social worker basically flat out told me a bunch of information that I should have known a long time ago. Information that had I known about when I had made all of the stalking reports to the police, might have saved me from being raped. That might have prevented me from now continually waking up every night from a terrifying nightmare, only to realize that the horror, is real.

I got home, and I FLIPPED THE FUCK OUT.

Then I started crying. Crying turned into sobbing, which turned into wailing from the core of my soul. My whole body was shaking and covered in tears, snot, and running make-up. It was the exact same ugly cry I had right after the rape. Before I knew it, I was yelling at my ceiling. I wasn’t yelling at God, but rather at the whole world. Yelling quickly escalated into screaming.

At one point I walked over and started screaming through the walls at the two nutcase neighbors “CAN YOU FUCKING HEAR ME OVER THERE YOU TWO FUCKERS? HUH YOU FAKE ASS, FAKE BLOND, FUCKING UGLY BITCH!? CAN YOU FUCKING HEAR ME!? BECA– USE YOU TWO CAN JUST GO TO FUCKING HELL. BOTH OF YOU!!!” Then I went right back to screaming at my ceiling. “You should have protected me you FUCKING POLICE! It was your JOB! I am WORTH SOMETHING! Doesn’t anybody see the good in me!? I am a good person and you let me get broken! Don’t you even care that I’m breaking!? Don’t you even care that I am a human being and I’m hurt and YOU LET IT HAPPEN!! STOP FUCKING BREAKING ME!!!”

Then I sat down on the couch, nearly convulsing in sobs, where I continued to cry until all that I had left in me was an exhausted whimper.

It was not pretty.

After what seemed like an eternity I picked my now exhausted, sorry ass up off the floor, fired off a few angry text messages to Mr. Attorney Man about the information I had found out, and washed my face. 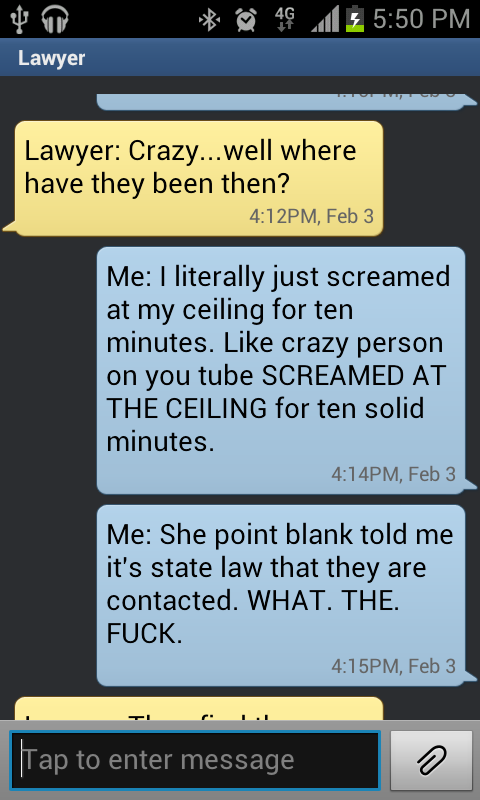 I looked later and the two nutcase neighbors weren’t even home, so I guess I’ll just continue to try and be nice to them.

I felt near comatose the rest of the night. The guy I’m sort of dating had no idea what was going on, yet was being overly sweet and kept trying to get me to call him. He called me a few times, calls which I immediately sent to my voicemail. I was in a terrible mood, and the last thing I wanted to do was drag someone down with me. If there is one thing I have learned in life, it is to not speak in anger, and I felt like daggers were going to come out of my eyes towards anyone that talked to me last night. 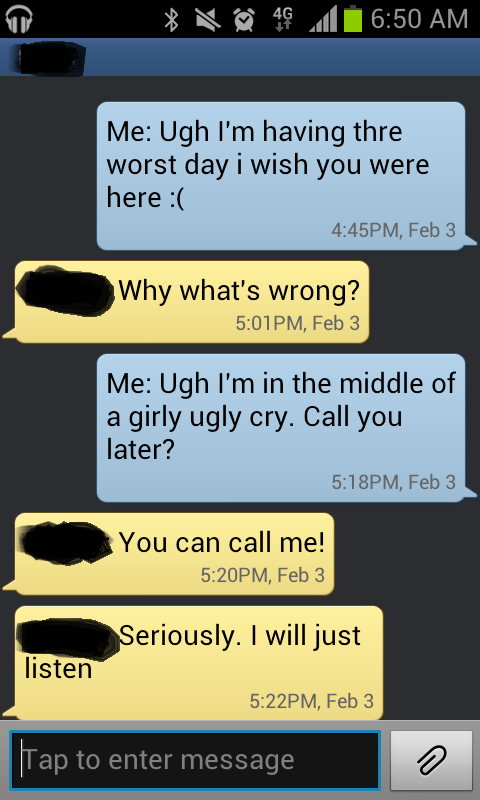 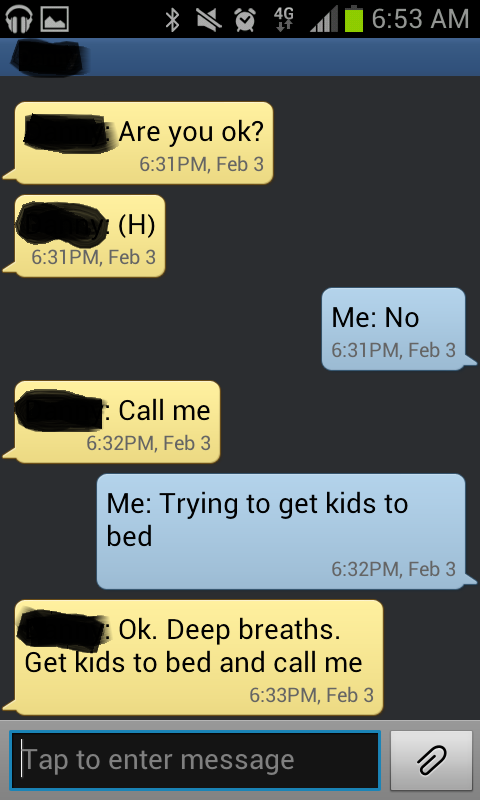 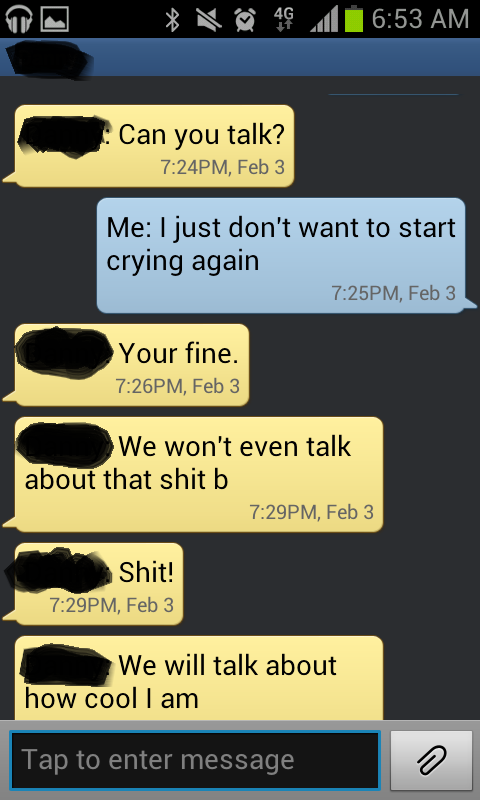 I put the kids to bed early, climbed into bed with a glass of wine and entire tray of brownies, and fell asleep.

This morning, the sun came up, it was a new day. I showered off the anger, I felt the feelings that I was masking yesterday, and I accepted the fact that I am deeply hurt. Deeply, deeply, hurt. A little bit broken, a little bit wounded, but not un fixable.

Broken just means that you need to take some time to put the pieces back together. I’m broken, but I’m not demolished. I’m taking some time to dwell on the feelings that I am living with, and deciding my next step. I feel betrayed by a broken and uncompassionate system, a system designed to protect me, a system that failed me.

I’m not angry anymore, but I’m definitely feeling a little more weary. For once in my life, I feel like I want justice, and I’ll admit, that scares me a little bit.

So there you have it folks. I spent yesterday as an absolute crazy person. It doesn’t make me look good, it doesn’t make me proud, but you know what? This is trauma. I promised you guys from the beginning that I was going to be real, that I was going to be raw. No holding back, no presenting only the parts of my recovery that make me look good, while holding back the parts that make me look bad. Nope, I knew when I started this blog that I needed to be prepared to let my ugly hang out. This is what trauma looks like. This what recovering from abuse looks like. These are the cracks where the ugly seeps out of a rape survivor. It’s not pretty. It’s not easy. Sometimes it is nothing more than screaming from the depths of your soul.

But like I always say, beauty blooms in the cracks of life. Good will come of this, healing will prevail. My soul will breathe and my life will go on.

Thank you all for being on this journey with me.

On My Way To Homelessness

Dates Where I Was On My Worst Behavior