After nearly two decades of hard drug use, my ex’s brain started to cook. I feel fairly confident in giving him that medical diagnosis despite the fact that I myself have never personally attended medical school, simply based on the fact that I was around him long enough to watch his brains actually start to cook.

So what does it look like when someones brains start to fry?

Think schizophrenia brought on by drug addiction.
When the delusions brought on by his drug use started to interfere with his everyday life, my quasi-medical school degree clued me into the fact that his brain was cooking. When no one around him was able to verify that what he was seeing was real, he did the most logical thing that someone in his position would do and he saw a doctor  stopped using drugs  did anything logical at all  decided that the rest of the human race was in on a giant conspiracy theory and he was the one we were out to get.

**I feel like I should add in a disclaimer that I myself eventually made an appointment with a doctor who specializes in addictions to make sure that my ex didn’t have an untreated mental illness, and the doctor agreed that it was most likely “just” the drugs.**

Abuse aside, living with someone who is paranoid 100% of the time is really freaking hard. I was the target of many of his conspiracy theories and as his brain continued to cook itself (I’m deeming that an actual medical term based upon the fact that I’ve watched like 30 TV marathons of “Mystery Diagnosis” and as I said, I’m pretty much a doctor now), he even progressed into sleepwalking.

He would wake up in the middle of the night and in what I can only describe as “complete robot mode with scary-as-hell glossed over eyes,” he would tell me that he was going to work (which was a warning right there that something was wrong with him, the “going to work part” I mean).

He would get dressed, pack himself a lunch (he was actually more self-sufficient asleep than he was when he was awake go figure), and then he would try and find his truck keys. I would have already hidden them because I was obviously not about to let a sleeping man drive a truck and then when he couldn’t find his keys he would go absolutely ballistic. There was no reasoning with him and trying to physically wake him up resulted in nothing more than violent bursts of anger, so eventually I learned that the only that thing I could do was to just sit back and wait.

Wait while he tore the house apart looking for his keys, and wait until his increasing anger would eventually wake him up because the hormone change would cause him to need his next drug fix.

Because that’s fun.
Hey, let’s take a drug addicted, paranoid, abusive, withdrawing man, and drop him right in the middle of his worst nightmare; a place where he is suddenly aware that he has changed clothes, is feeling very angry, has no idea how he got to wherever we were, and the wife that he hates is there.
I’m fairly certain that he thought I was some kind of alien or something and that I was borrowing him at night for science experiments. 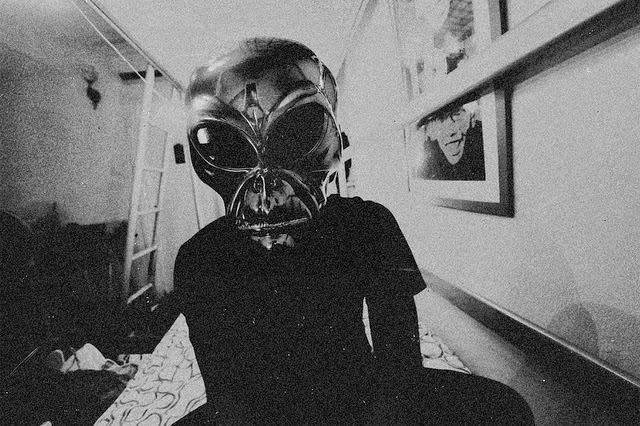 Due to the fact that he was crazy and absolutely unable to be reasoned with, he started to believe that I was actually out to get him. Several times I awoke up to find him standing over my bed with a large kitchen knife and whispering things such as “I know what you did and I just want you to know that I could kill you in your sleep, bury your body, and no one would ever find you,” which was one of the strangest things Mr. Attorney Man recorded in my divorce file case notes.

(Can we also just take a minute to acknowledge the fact that I called my parents, freaking out after this happened, and they offered to put my ex in counseling? Yep, there was no “LET’S GET OUR CHILD OUT OF THAT HO– USE BECA– USE SHE IS LIVING WITH A PSYCHO,” instead there was an “oh. Let’s get your husband some talk therapy for his murderous threats.”)
*Facepalm* 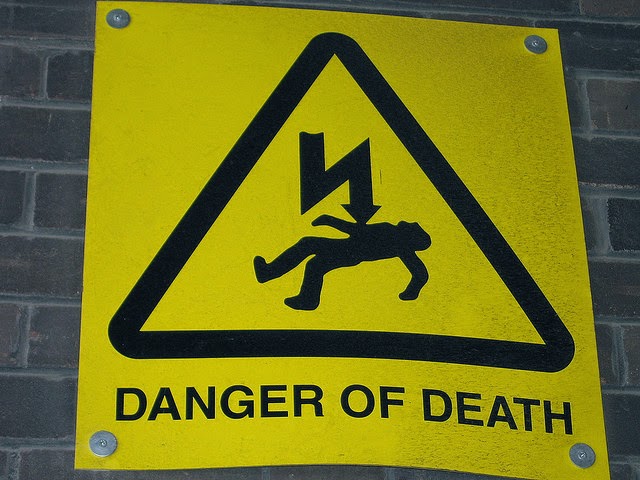 But aside from the fact that I may or may not be an alien, do you want to know which of his conspiracy theories caused the biggest rift in our house?

I’ll tell you which one it wasn’t.

It wasn’t his theory that I gave off a bad electrical charge and therefore was not allowed in the room if he was using anything electronic, which was annoying as hell for me because “Eden don’t come in here, I have the lights on.”

It wasn’t even his theory that since both of our kids have almond shaped eyes that they must have been switched at the hospital, since “CLEARLY the hospital is trying to give away Asian babies.” Despite the fact that he is Native American and Native Americans are Asian decedents, he stood steadfast that our hospital was “CLEARLY” part of some kind of intercontinental baby trafficking organization.

Yea, surprisingly it wasn’t even that conspiracy theory that caused the most problems, and that was a pretty big issue.

Nope, believe it or not, the conspiracy theory that caused more arguments than all of those combined was the one that had him FULLY CONVINCED that our neighborhood was part of a government takeover that would most certainly end humanity as we know it.

This was something that he would fret heavily about, research online, and try to engage in conversation anyone who would listen to him, because WE HAVE TO SAVE THE WORLD.

Recycling.
Nope, not even kidding.

He 100% believed that one night he saw the garbage truck, not the recycling truck, come and take our recycling.

This was apparently very frightening for him.

He was absolutely convinced that they were taking our yogurt containers and empty cereal boxes back to some government lab to do “who the hell knows what they want with them Eden, but if we are paying taxes for recycling and they aren’t actually recycling, then they must be up to no good.”

I had to hear about this nearly every time I saw him. I was made to look at the research, watch “the subliminal messages on TV” that he was convinced were hidden in everything from commercials to cartoons, and watch him embarrass himself over and over again when talking to people that we knew because ” they are taking them back to the lab where they are collecting our DNA…” and seriously JUST SHUT UP ALREADY.

More than once I walked into a dark room, fully unaware that he was in there, only to be tackled to the ground as he hissed “they will see us!” while he crawled back to the window and peered out through the blinds. There is nothing quite like watching your high-as-a-kite husband hiding from a recycling truck… I mean a truck “posing” as a recycling truck, while he waits for what he is sure is a government agency truck that is going to come by and collect clone baby embryo ingredients from our recycling bins.

Not only was this weird in more ways than I care to list, but we would get into actual arguments over it because I’m a bit of a tree hugger. There I would be, clutching an empty egg carton and begging him to think of our future planet, while he would be screaming at me to throw away the fingerprint covered tracking device.
It was so bizarre.
I mean at times I found myself trying to sneak soup cans out of the trashcan and into the recycling bin when he wasn’t looking, because I could not bear the thought of them sitting in a landfill forever.
Actually, now that I’m writing this I’m beginning to think he may not have been the only one with a problem…
But anyways…
So yes, the big recycling conspiracy wars waged on, him screaming that recycling was going to cover the world in robot clones and me crying that not recycling was going to cover the world in trash.
Ah, the stories I get to tell my kids one day about their father…
Nothing like a good old science fiction family folktale.

I have to say though, towards the end of our “relationship” where he was just an outright ass 100% of the time, I liked to get my little passive aggressive revenges in where I could. Since he was always so paranoid anyways, I had a little fun with it.

I mean really, if I’m being threatened in my sleep with a knife about something that I “supposedly” did, I kind of feel like I an entitled to a free pass to actually do something.

So I did something(s).

One day I bought a Barbie that had the exact same hair color as my ex had and while he was sleeping I cut up the Barbie’s hair and sprinkled it all over his pillow. The next morning I patiently waited until I heard “what the hell!?” and then I high-fived myself and he came upstairs (he slept on the 1st floor, me on the 3rd). He didn’t say a word.

I waited a few minutes and then after a while when I wasn’t getting the reaction I was hoping for I said “huh.”

He looked and me and asked “what? What are you looking at?”

“Oh! Nothing. It’s nothing,” I said, pretending to act a bit startled and then play it cool.

“Well it’s obviously something Eden so spit it out” he said, clearly annoyed.

“No, no, really, really it’s nothing” I said, in the most fake sounding voice I could muster up.

“If it’s nothing then why did you ‘huh’ in my direction!” he snapped.

“Well gee, I was trying not to be rude so I didn’t want to say anything, but your hair looks, I dunno, like super thin or something” I said. “Like you are suddenly going bald or just got like really old, super fast. But obviously that can’t happen overnight unless something is like really, REALLY seriously wrong with you, so I must be crazy.” I then squinted my eyes in his direction, gave myself a perplexed look, shrugged my shoulders, and walked out of the room. 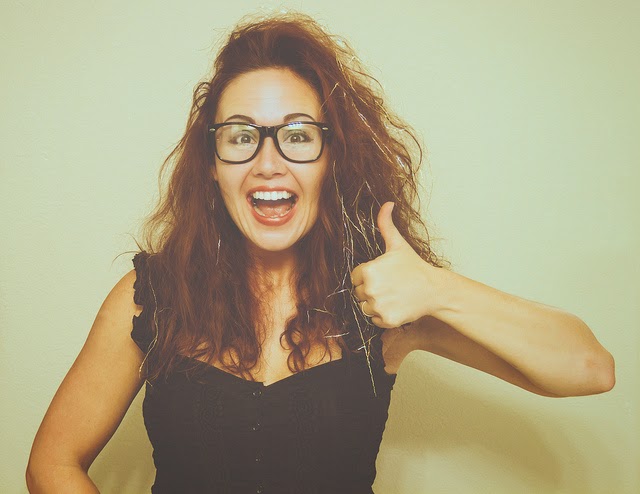 I’m such a bitch.

Later I walked by the bathroom and saw him looking in the mirror while muttering “what the fuck is going on here?”

************
If you enjoyed this post, check out these!
“I May Be A Bit More Devious Than I Originally Let On.”
“While In My Underwear I Punched A Girl In The Face.”
“Do You Remember That Time You Finally Told Your Mother-In-Law Everything You Really Thought About Her? I Do, Because It Was Today.”
“Another Edition Of: True Stories In The Operating Room.”

Allow Me To Catch You Up…