The Destruction Of Life

As I’ve talked about before, I used to do a lot of missionary work. For many years I spent part of my summers traveling the country and seeing poverty and human suffering that most people cannot even imagine. As I’ve also mentioned before, quite a bit of that time I spent in New Orleans. Sure, I walked the French Quarter, had a beignet at Cafe Du Monde, made my way down Bourban street, and tasted Jambalaya so authentic that it came from locals who would make it at their houses and bring it to the mission house (oh my gosh SO spicy send help!!!), but unfortunately my New Orleans experiences were even more authentic than that. I saw what many people never see past the jazz musicians and Voo Doo shops; the hopelessness and crime.

The first trip I went on was to help build a teen center to give kids a place to hang out. The goal was to get kids off the streets and away from gun violence, drugs, gangs, and prostitutes, and prepare them for a future outside of everything that was surrounding them. That trip was a lot of hard labor, but it wasn’t too much different than any of the other trips I had been on before, except for one thing.

The big difference between that trip and any of the prior trips I had been on, was how unsafe it was.

On every other trip I’d been on, I had lived among poverty. I worked in towns filled with nothing but hungry, dirty, desperate, people who all needed help, and my heart overflowed with tears for people who couldn’t even afford basic needs. But my first New Orleans trip was nothing short of shocking.

I’d seen dirty, I’d seen hungry, but I had never seen so much danger. 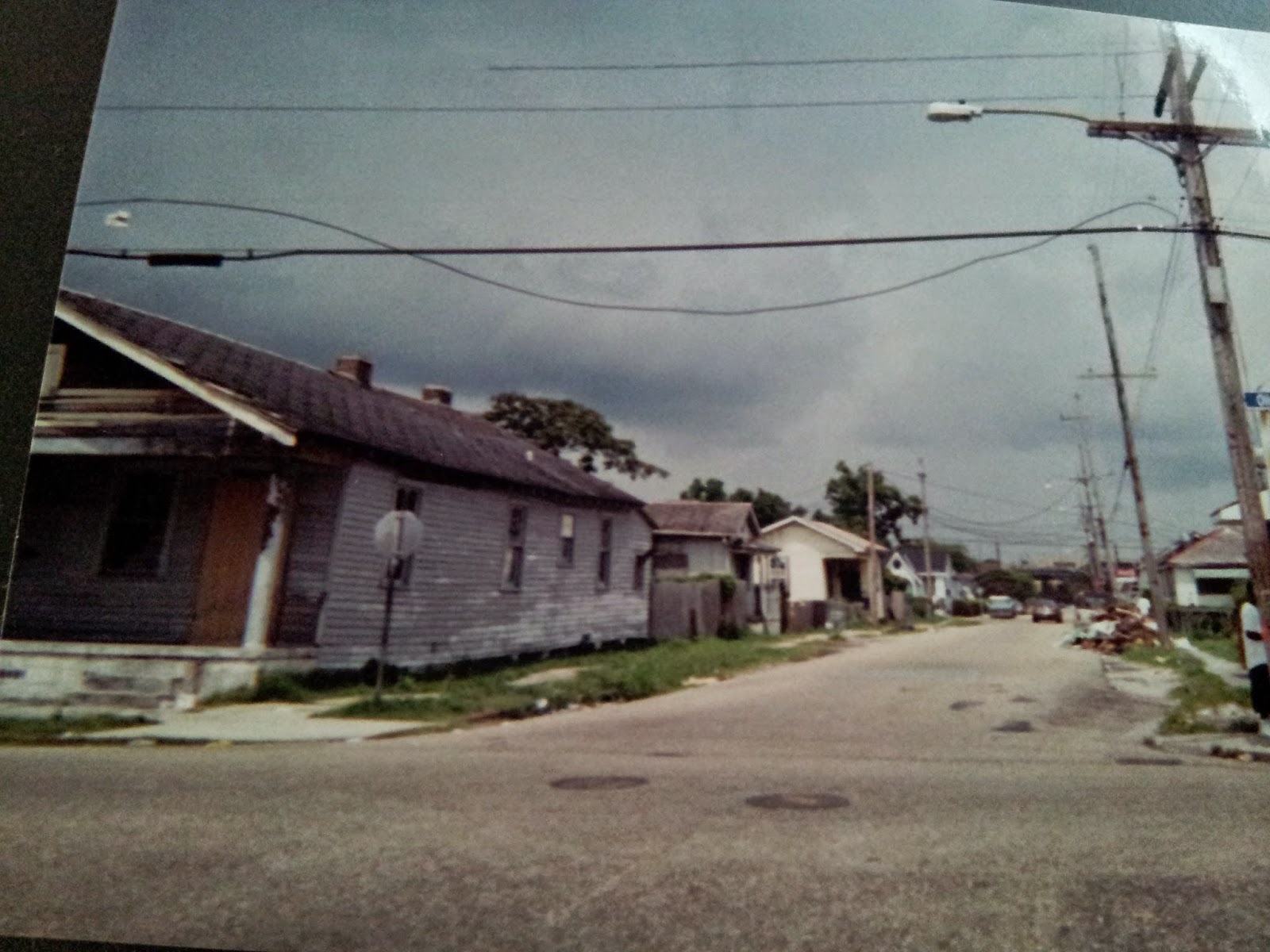 Forgive the poor quality, I had to take pictures with my phone of the pictures in my albums because I don’t have a scanner. I took this picture standing just outside of the youth center.

There were rules. Women were never to go outside alone must always be accompanied by a man. Men had to travel in pairs. When the sun started to set, everyone must be inside.

Crime was at an all time high and it wasn’t hard to see why as we watched strung-out prostitutes turn tricks in a house 50 feet from us and drug dealers with guns in plain view walk up and down the street looking for their next sale. A sign bolted to a light pole read “attention drug dealers and prostitutes, this is a school bus stop so please take your activities elsewhere. You’ve made your choice as an adult, now please allow our children to become one.” The sad reality though is that only 1 out of 7 children who grew up in the neighborhood would ever become anything other than the people that sign was warning them against.

The neighborhood reeked of dying dreams and hopelessness, which was quite evident by the lack of police presence; a haunting symbol that the outside world had given up on the residents of this town. 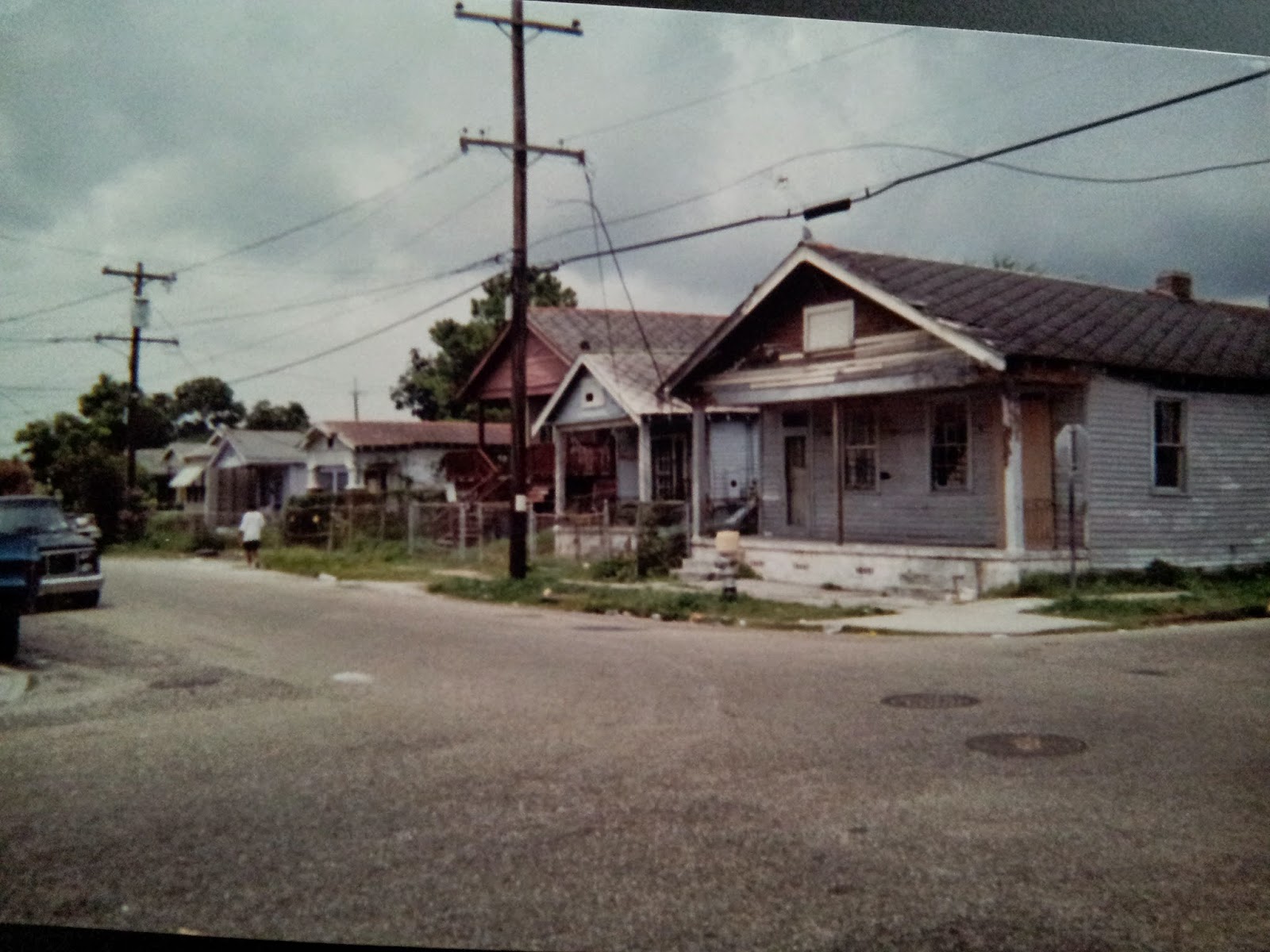 For the kids whose parents even bothered to send them to school, they were stepping off the bus each day and onto the only street that many of them would ever know; a fact that would claim many of their lives.

I’d walked among poverty before, but this was the first time I’d ever been hell.

When I returned just a few years later as part of a rescue and rebuild team after Hurricane Katrina hit, there was no way I could have prepared myself what I saw.

There were no prostitutes or drug dealers, because there was nothing at all. 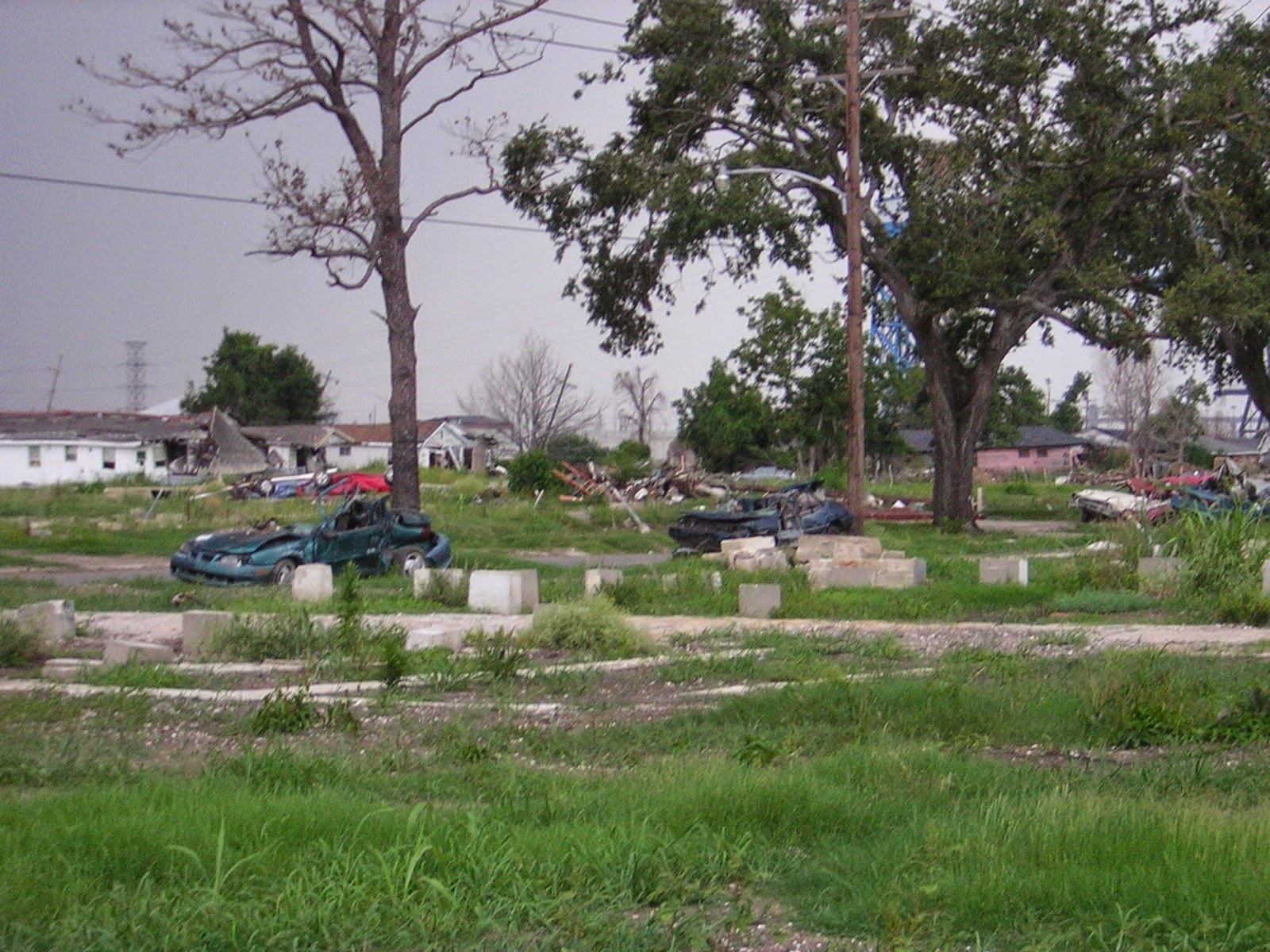 Those concrete blocks are foundations for where houses once stood.

Standing there in the lower ninth ward I remember the silence more than anything else.

I don’t know if it was in my head or if it really was that silent, but it was so quiet that it was absolutely deafening. I just stood there, repeatedly blinking my eyes; certain that at some point I would open them and realize that I was actually in bed and everything I thought I saw had all been a nightmare, because surely what I was looking at could not be real.

It just did not look real. 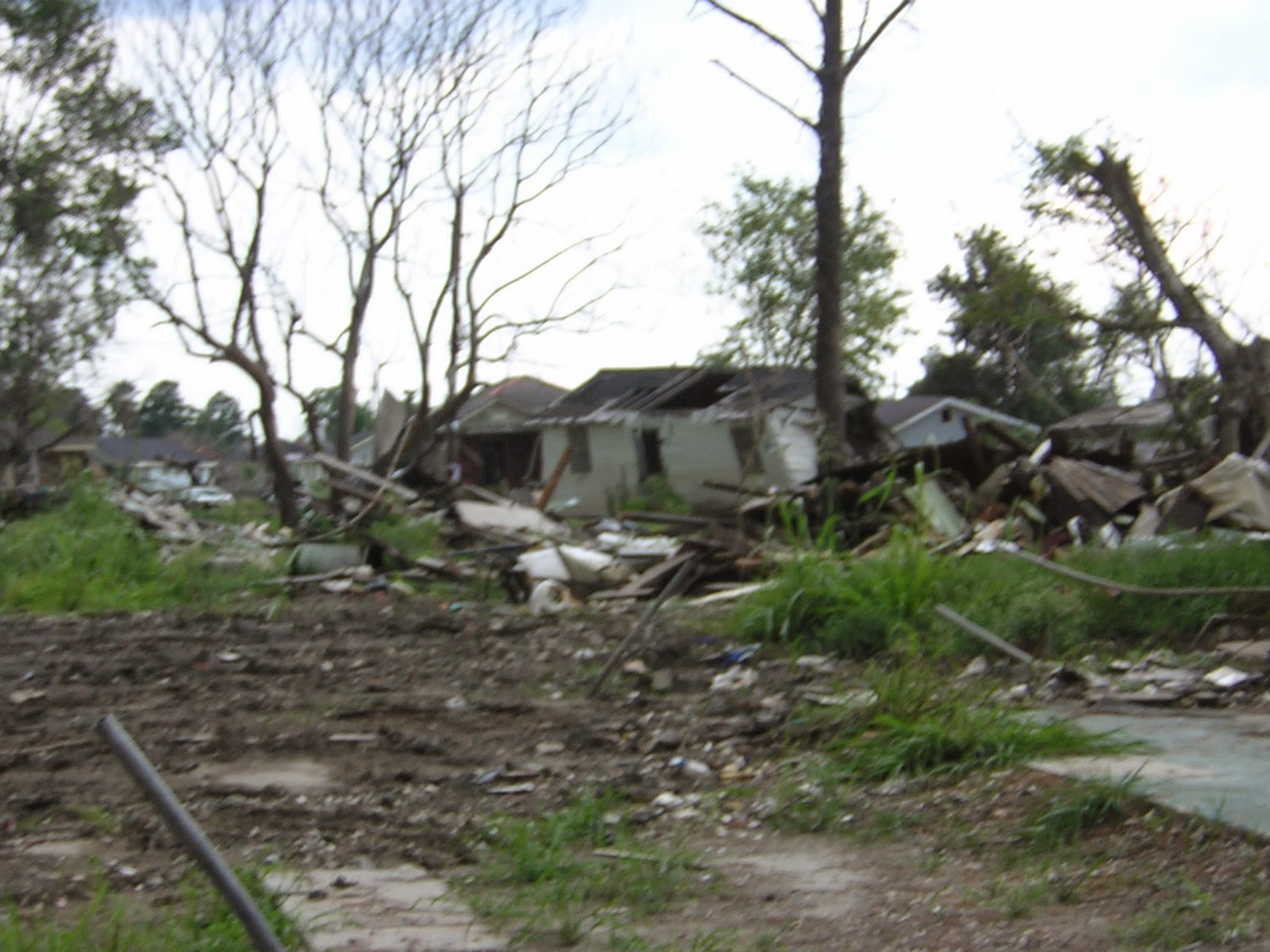 There were empty foundations where houses used to stand, cars twisted up like smashed soda cans, and large X’s on the side of mangled houses that told the story of the lives that were lived there — and lost there. 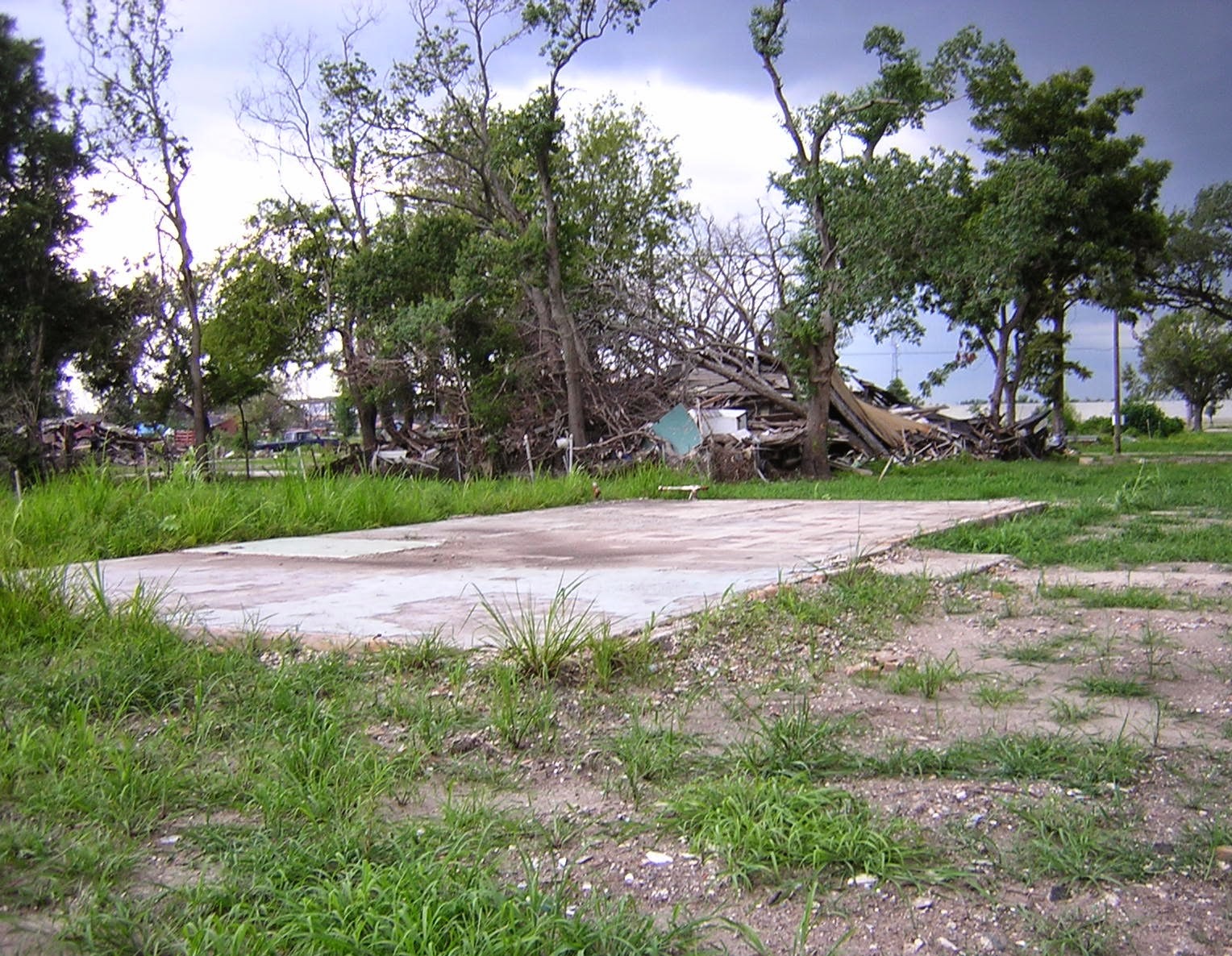 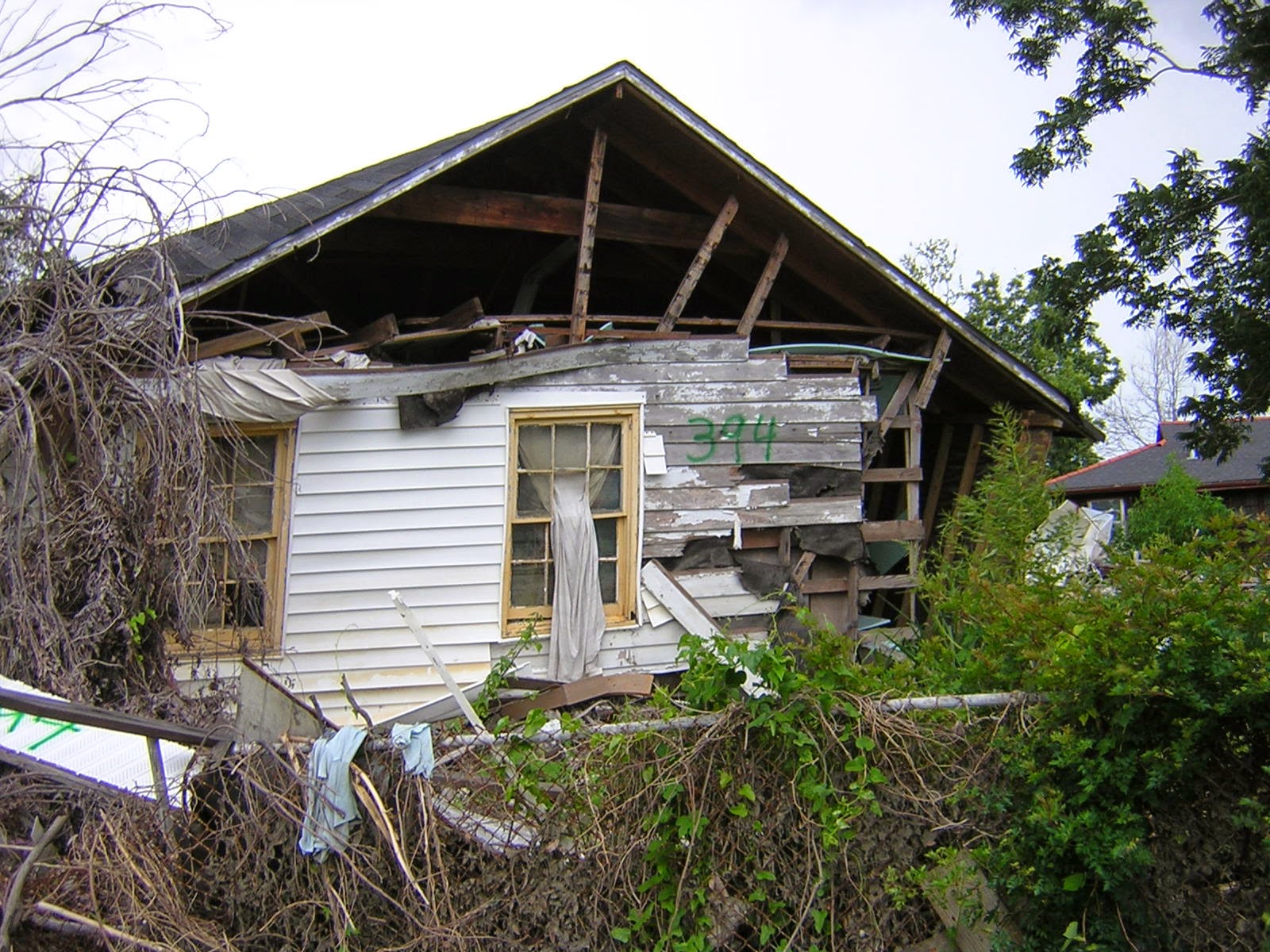 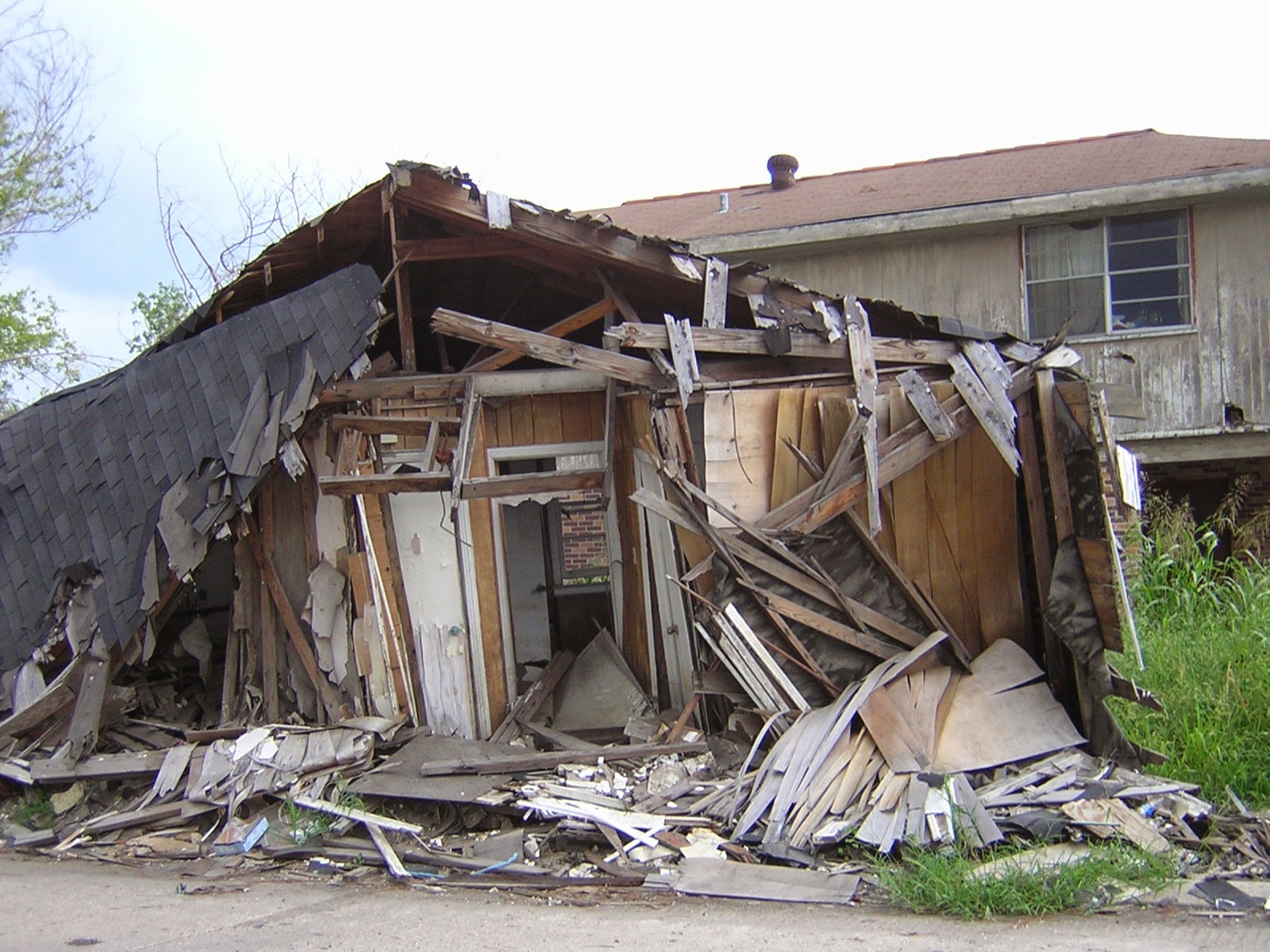 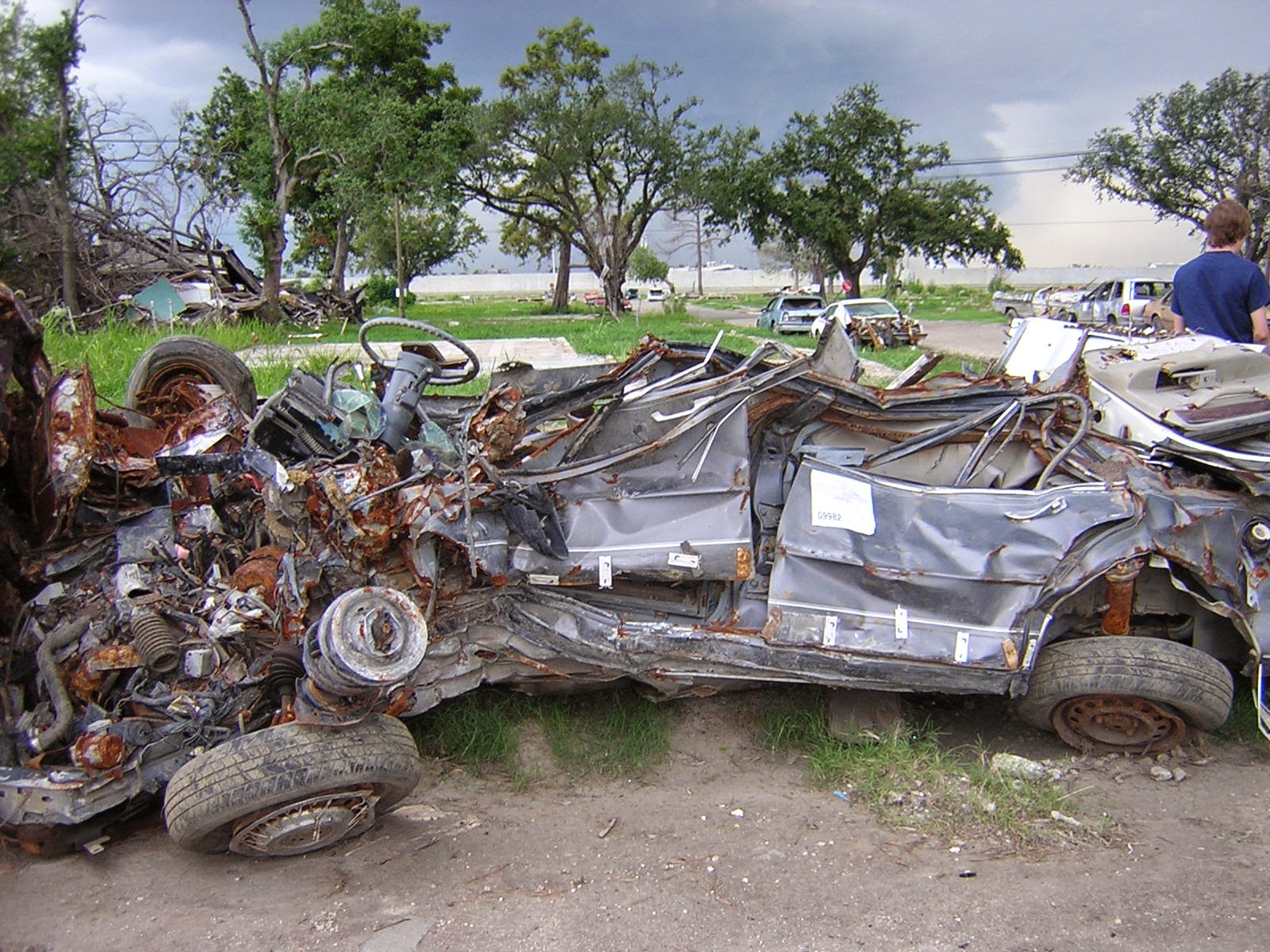 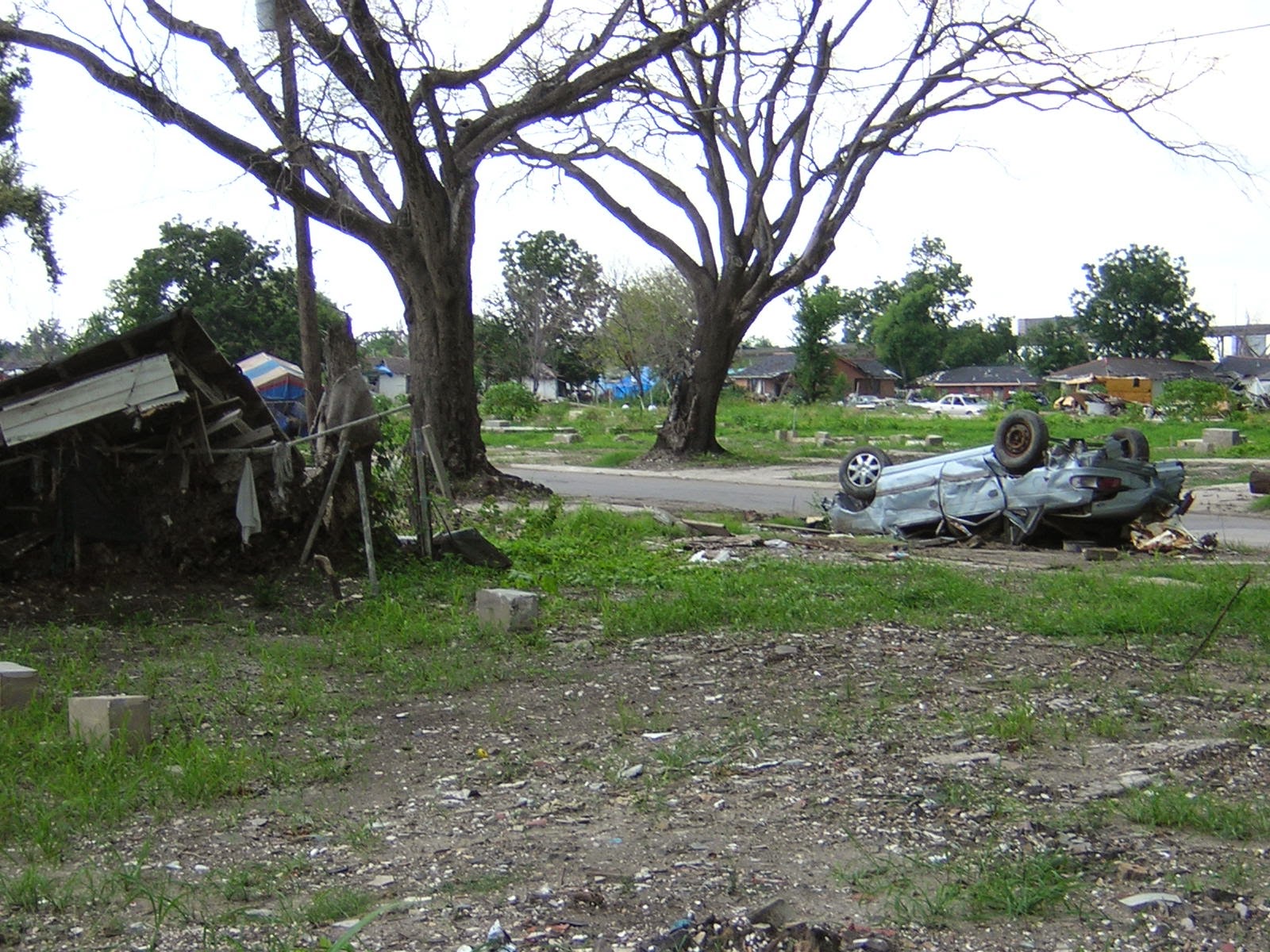 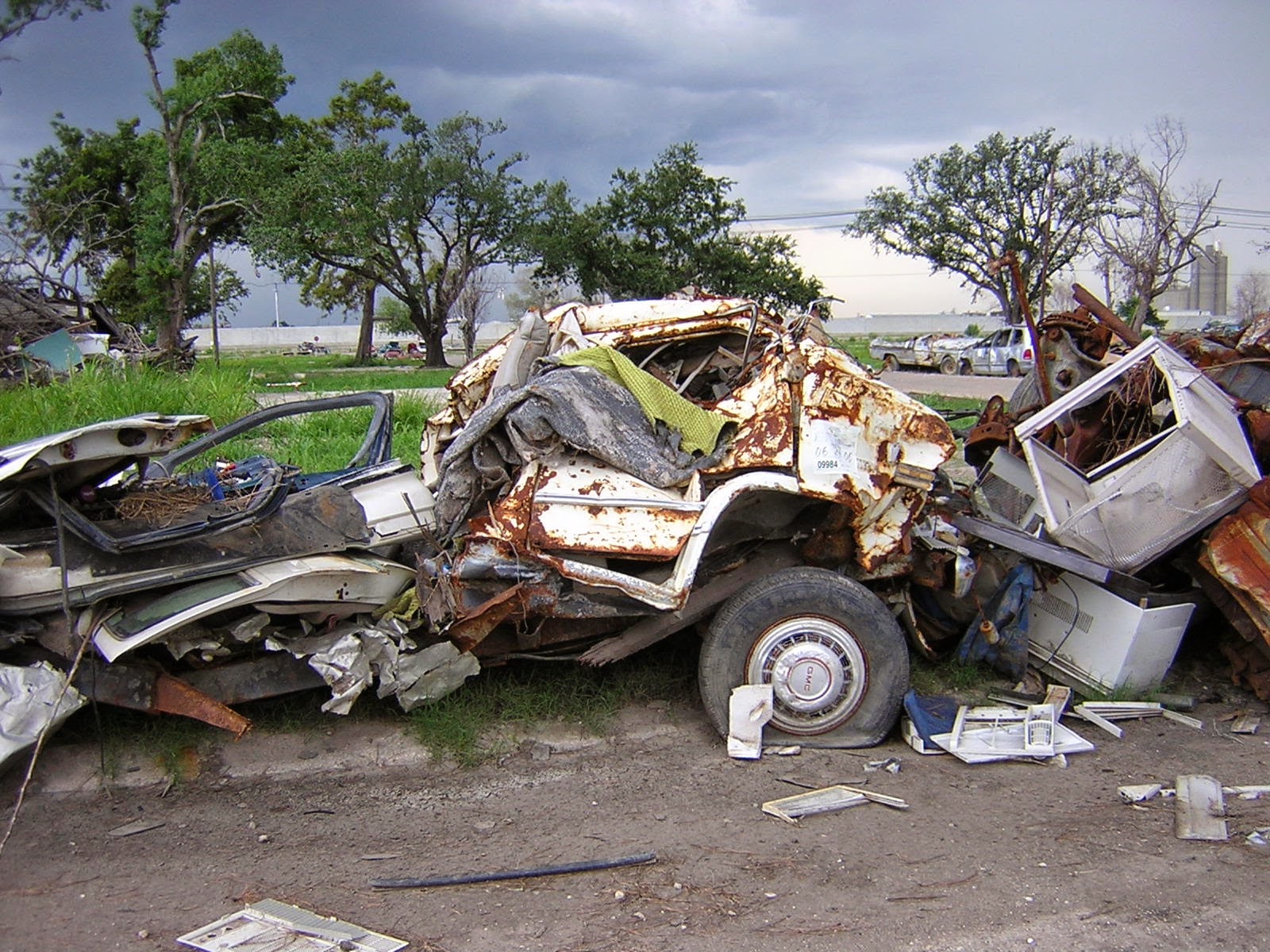 To this day I still choke up when I think back on that. I’d never stood where death was before and looking around at all that was gone, it was a feeling of hopelessness that was almost too hard to process.

I couldn’t fix this, so why was I even here?

It was the visual picture of how I felt when my husband left; a thousand lifetimes washed away, leaving nothing but destruction and emptiness behind.

For the next week in 111 degree heat, I worked my ass off in a sewage filled house in a neighborhood not far from where the levee broke. Because of the sheer amount of work, I spent much of my time feeling as if I wasn’t doing anything at all, but always praying that I was. Suffocating in my dust filled mask and safety goggles, I worked my hands raw. With fatigued and shaking arms, me and four other people used hammers to tear out hundreds of pounds of moldy plaster and ancient lath boards from that old house, before shoveling it all into wheelbarrows, carrying the wheelbarrows down the front porch steps, and dumping it all by the street. 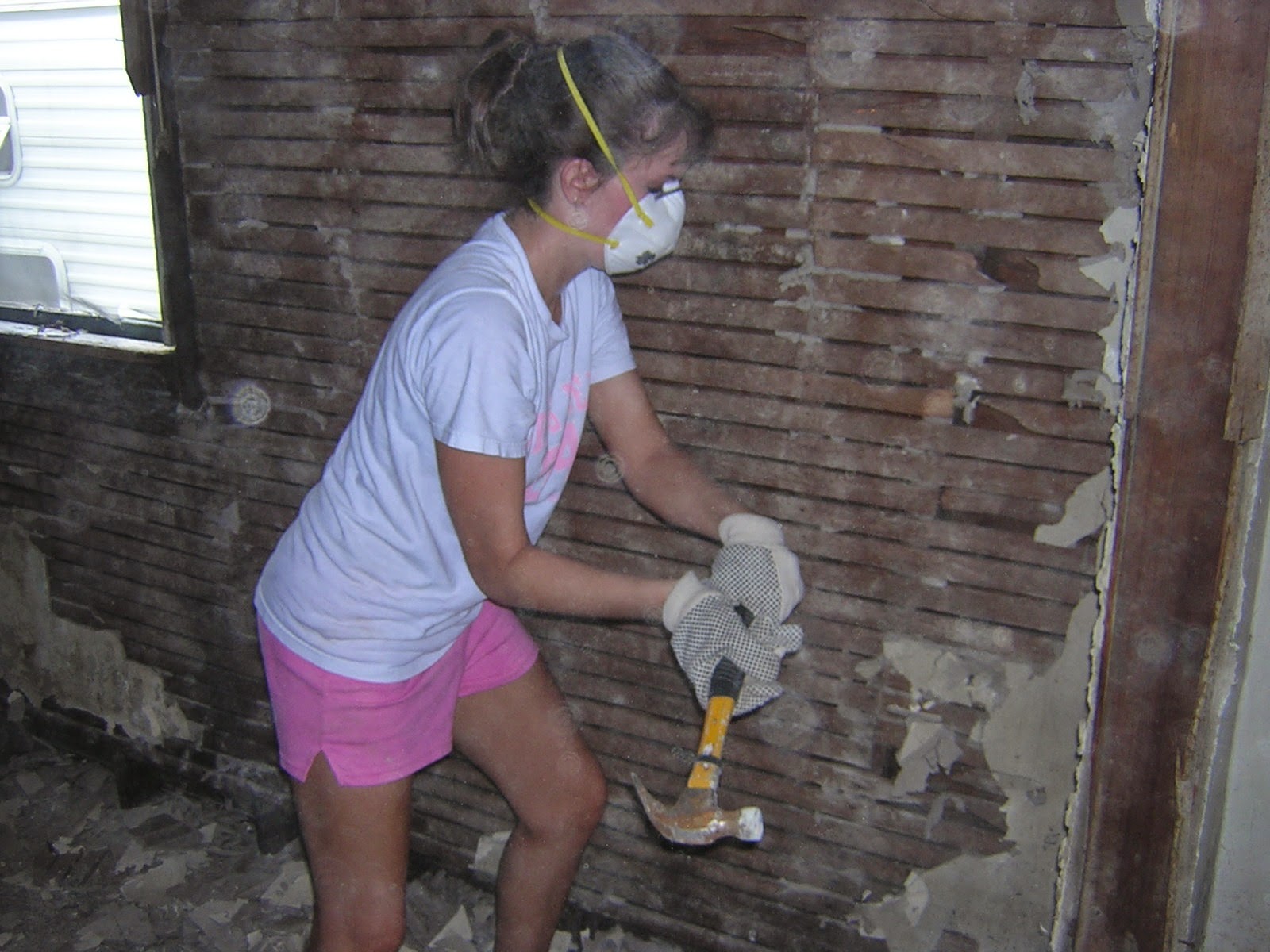 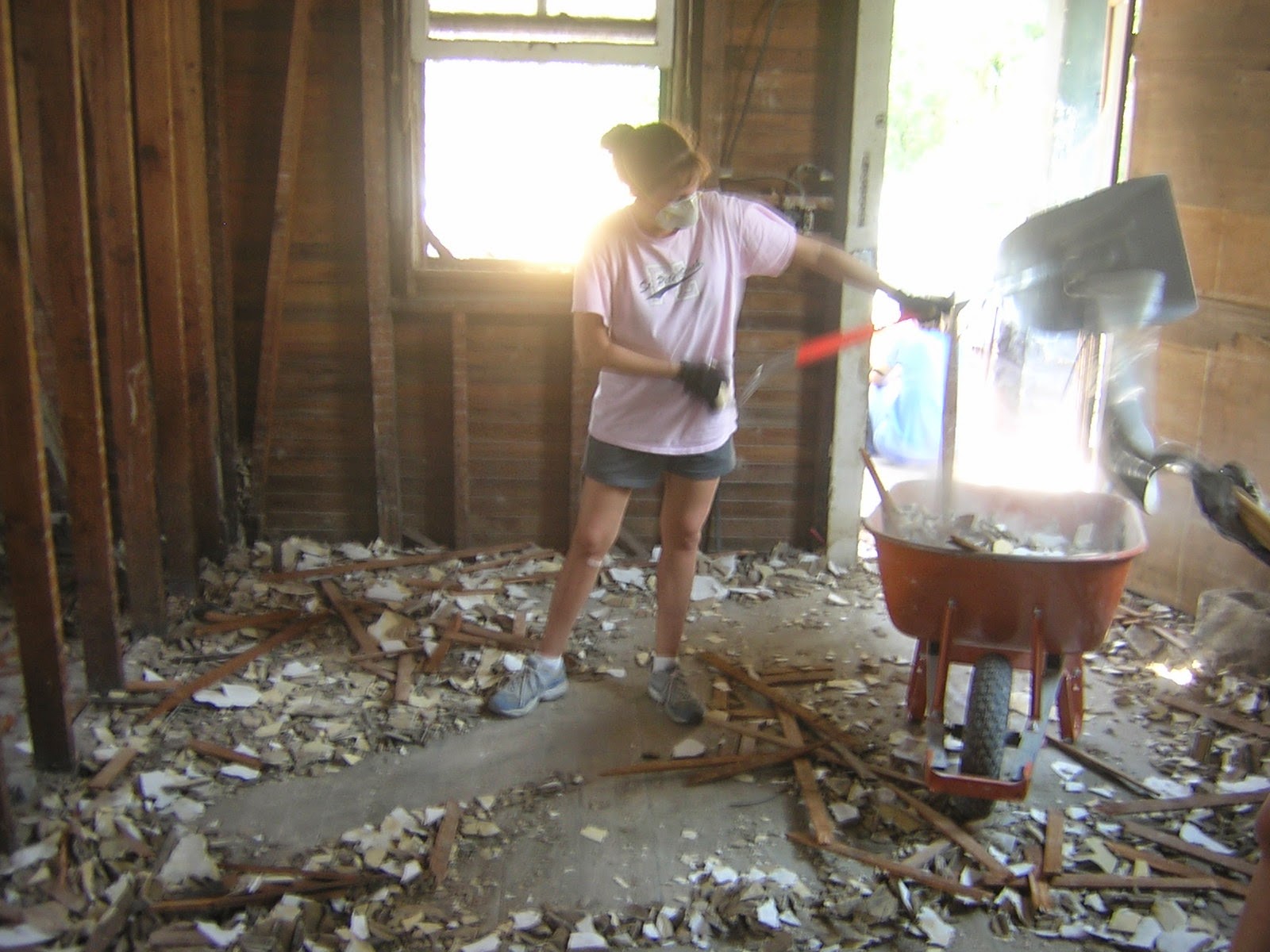 I watched the homeowner work alongside us, dragging her water laden possessions to the garbage pile, and when I saw her granddaughter pluck her doll from beneath the rubble in the house and add it to the pile on the street, I lost it. I excused myself to the edge of the porch and did my best to hide my tears, but it had been a long week and after shoving so many emotions down, they came boiling to the top in an overflow I couldn’t control. 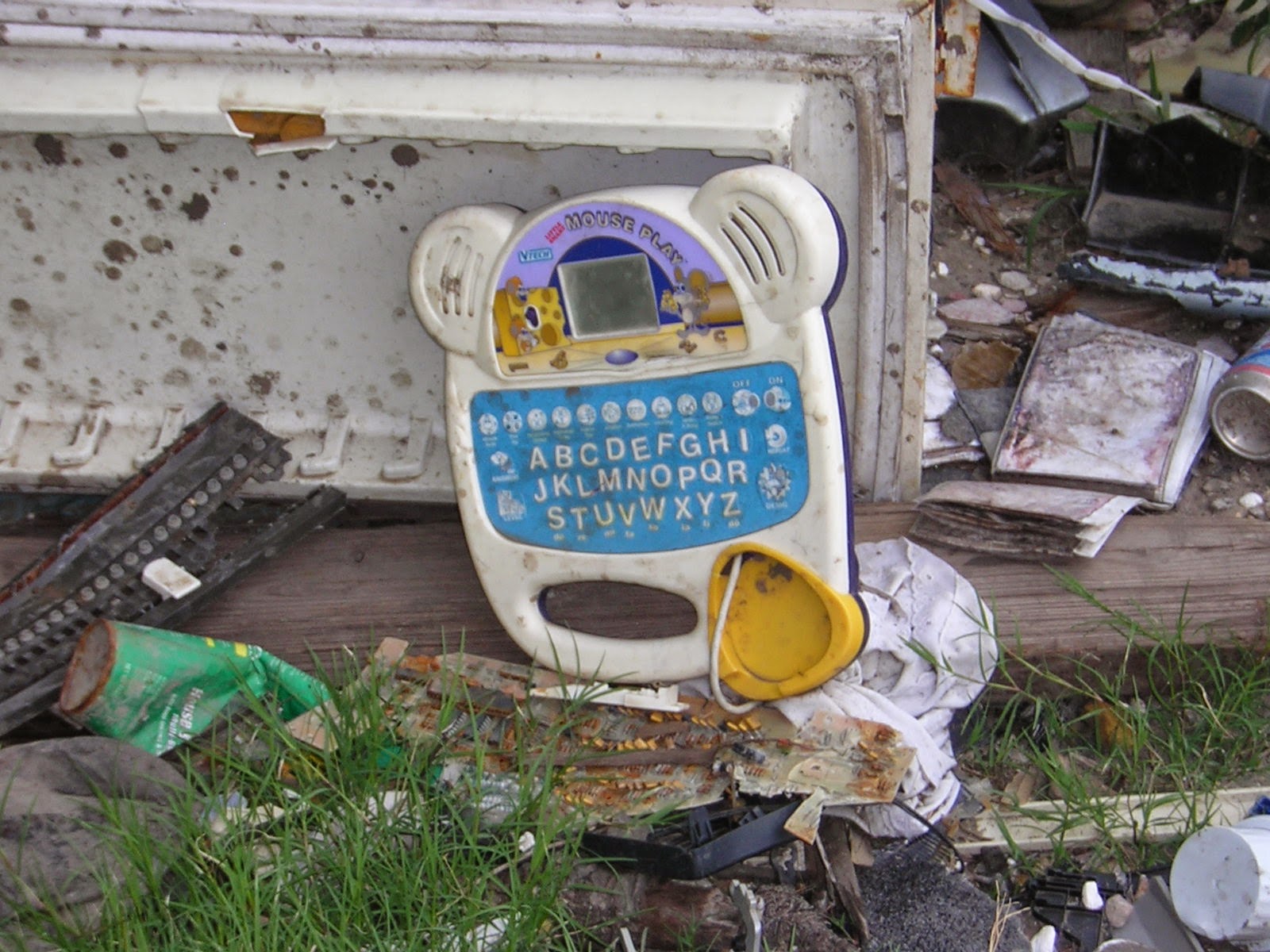 A levee had broken, and it’s overflow had broken me.

The homeowner came over, put her arms around me, and in her sweet N’awlins accent said “baby why you crying?” I couldn’t even speak because I felt like anything I was feeling was so insignificant compared to what she must be feeling and I didn’t want to remind her of everything that she had lost. 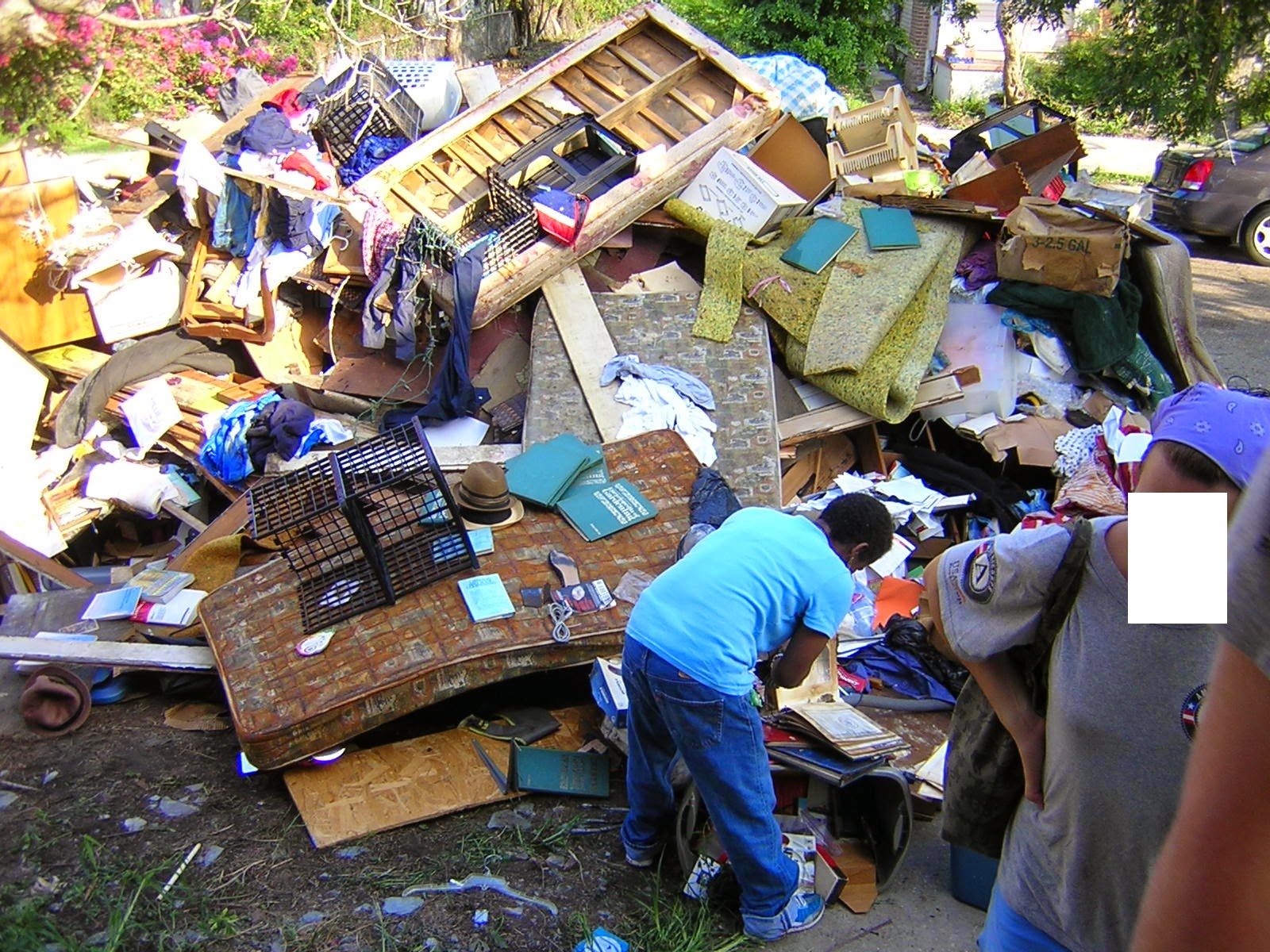 “I know this looks bad baby, but this is good” she said, trying to comfort me. “This is real good. This is just stuff. We lost a lot of stuff and we lost a lot of lives and we can’t never get those lives back, but today we saving lives. This hurricane, it washed away a lot of people, but it also washed away a lot of evil. We all knew we was going to grow up here and die here, nobody taking notice of us, no way out, but this water washed away the drugs, the guns, and it brought all of you here. We never woulda had this change if it weren’t for this hurricane. My kids never woulda had the chance to be somebody. Look at the street baby, look at the street” she said, pointing down the street of her neighborhood.

Wiping my tears away with the back of my filthy hand, I looked up, and for the first time I saw what she was talking about. I looked around and I saw destruction, but I also saw all the change that was taking place because of it. The streets were lined with different mission groups working on different houses, just like the group that I was traveling with; all pulling together for the common purpose of making the neighborhood a better place.

I know we’ve talked about this before, but since so many new people have flooded this blog recently (no pun intended), I just wanted to take a minute to remind you that destruction is not the same as death.

If you are standing in a place in life where everything around you seems like it’s falling apart, and when you look around all you see are the ruins of where your life used to be, know that this is not the end.

It is not over, because you are still standing.

Sometimes in life we become so bogged down and trapped by the things that are killing us, that we need a fresh start in order to really live. Those New Orleans residents? Many of them were living out their lives in a death sentence they couldn’t escape from. They were living lives with nothing that they actually needed for a future, and only when everything they had was washed away, were they finally given everything that they needed for their only chance at a future; a fresh start. 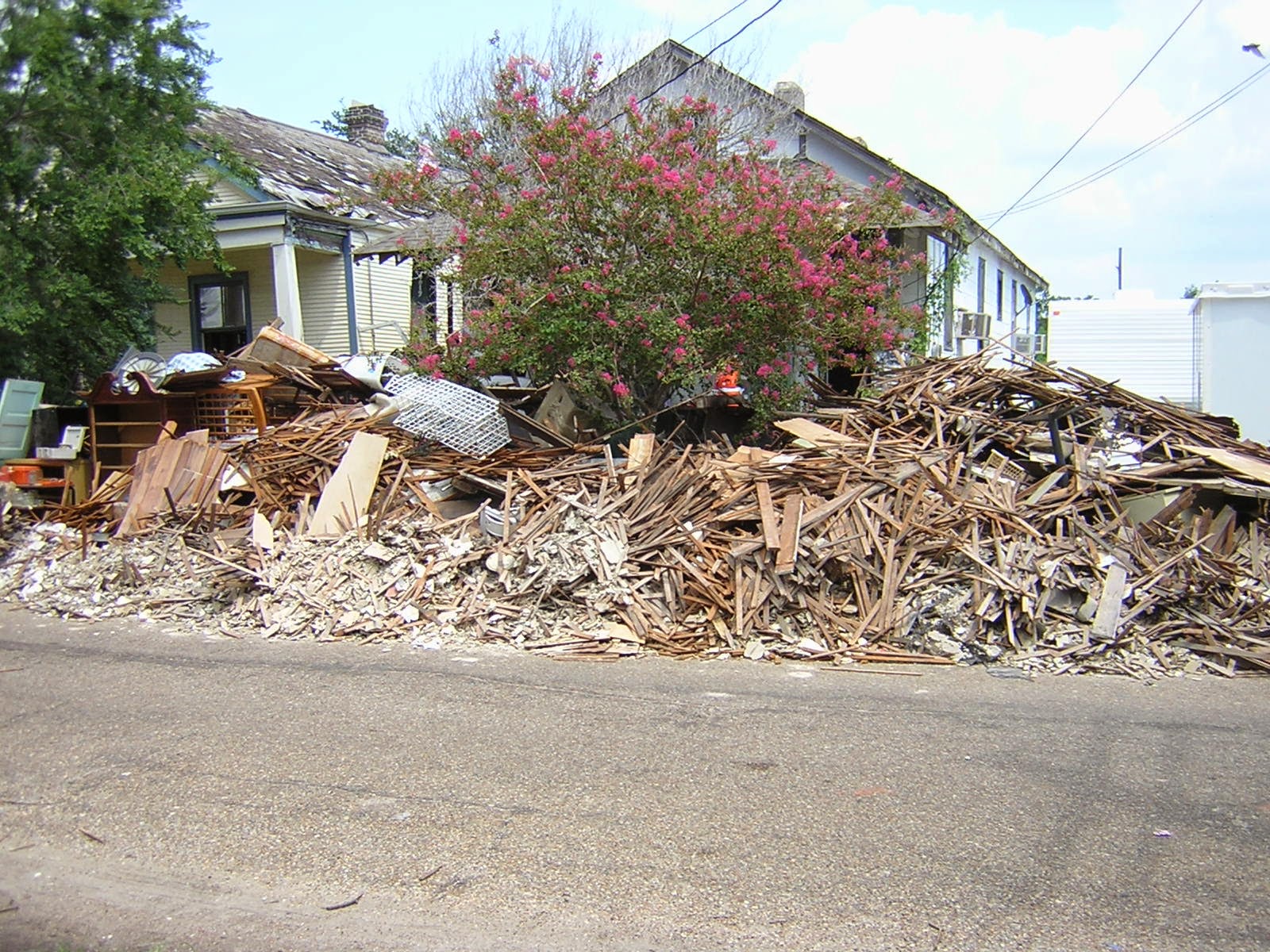 At first it didn’t appear that way, but it’s the truth. Do you know what the definition of destruction is?

Destruction: the action or process of causing so much damage to something that it no longer exists or cannot be repaired.
Sometimes destruction is the only way of ensuring that you move on. I mean look at me, I was trapped in a life that was killing me, but it was only when my ex abandon us, my entire life fell apart, and there was nothing to go back to, was I finally forced to step outside of my comfort zone and build myself a life; a real life.

If you look around and destruction is all you see, you are not living in the ruins of your life, you are standing in the middle of your new one.

If it appears as if everything in your life is gone, you are not at the end, you are just at the beginning of something new. 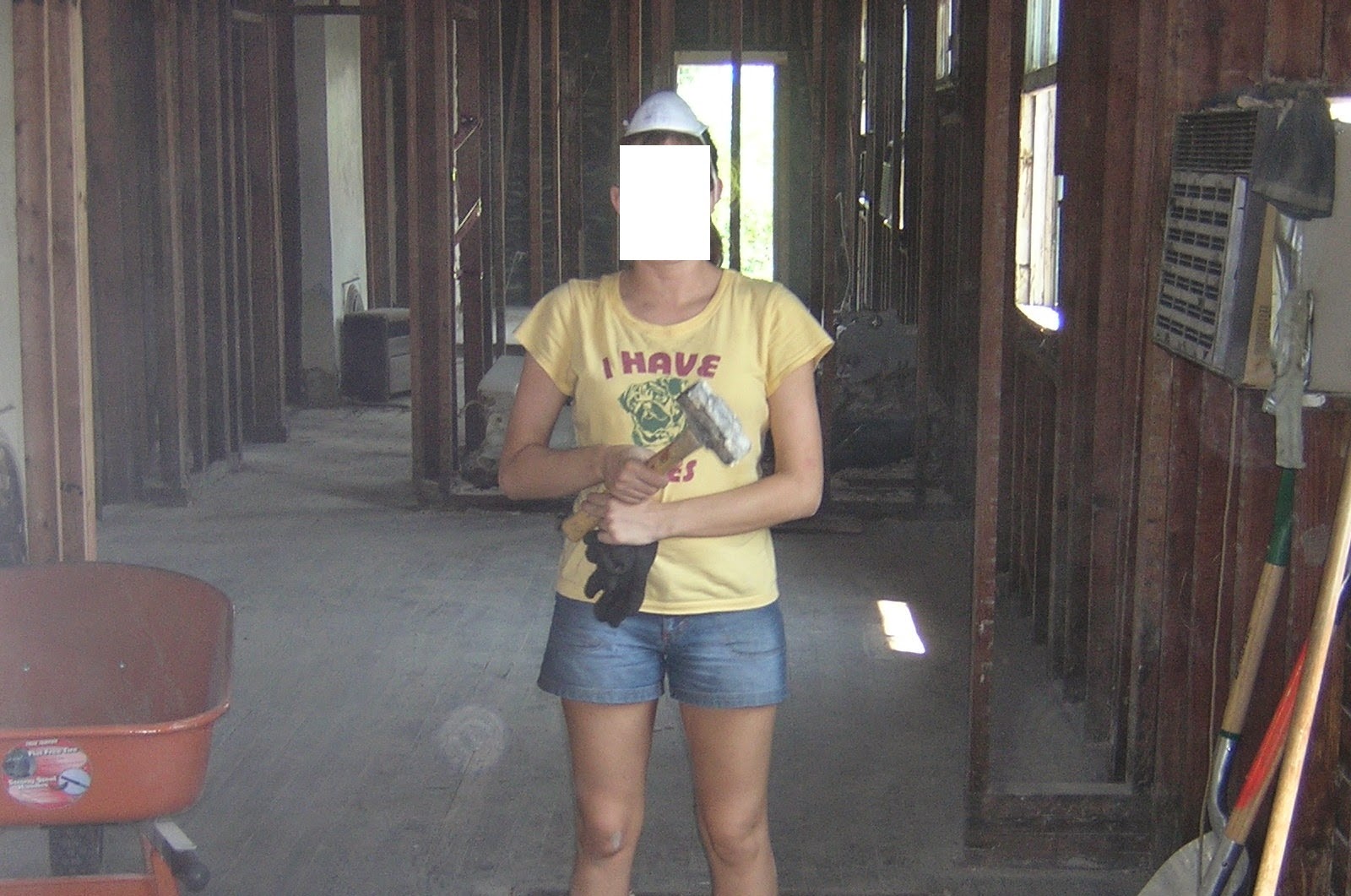 If You Liked This, Read More About My Missions Work Here: Just Show Up

Or Read These Relevant Posts!

When Your Life Burns Down

In The Two Years Since You Left