Give Me Your Thoughts On This

Actual conversations I’ve had with The Girl Child this week;

“Mom, if I stick my finger in there will I be ‘electrocubed’?”

“Yes kid, if you stick your finger in the socket you will be electrocuted.”

“Why are you still staring at the socket?”

“I’m trying to decide if I want to risk it.”

While driving in the car, “Look mom!! A kangaroo!!”

“That is a deer standing on its hind legs.”

“Mom, when you’re dead, can I have your phone number?”

“Aw. Baby, remember how we talked about how when people die, you can’t talk to them in the same way anymore? You won’t be able to call me.”

“No, I mean like can I actually have your phone number? Can you have them put it on a phone for me?”

“What are you like 15 now? And why do you want my phone number?”

“Because it’s the only one I know. How will all my friends be able to get ahold of me if I don’t know my own phone number?”

“This is called a blood test babe. They just have to quickly take a little bit of blood out of your arm, ok?”

“Can they just take all of it so that the next time I get a cut I won’t need a band aid?”

Seriously though, is it just me, or is my kid like… extra… “special?”

She is definitely a strange one.

Speaking of strange, the other day I was folding laundry and Disney Jr. was on TV. All of a sudden my ears perked up when I heard the word “wine.” You moms know what I’m talking about, when you completely drown out whatever show your kids are watching, usually because of the incessant and relentless singing those shows seem to have, and then all of a sudden your brain catches a word that makes you go “wait a minute… what are they watching?”

Well my brain heard “wine” and I look up to see some children’s cooking show on and the chef was instructing the kids to pour one cup of wine into the pasta sauce. “Now the rule with wine is that if you like it, your food will like it.”

THIS IS A CHILDREN’S SHOW IN AMERICA. THEY AREN’T ALLOWED TO LIKE WINE.

Seriously, am I the only one that finds that a little strange? Now you all know that I’m by no means a
sheltering parent, but at what point did the producers sit down and decide “you know what, we absolutely cannot make pasta sauce without wine, there simply are no other recipes, so we are just going to have to go with this.”

Not even on Disney, but on Disney Jr.

I STILL NOT UNDERSTAND.

But anyways, hey, it’s another No Work Weekend!!

So far ours has kicked off well, although I still haven’t found the gerbil and my friends have yet to let me live that down. 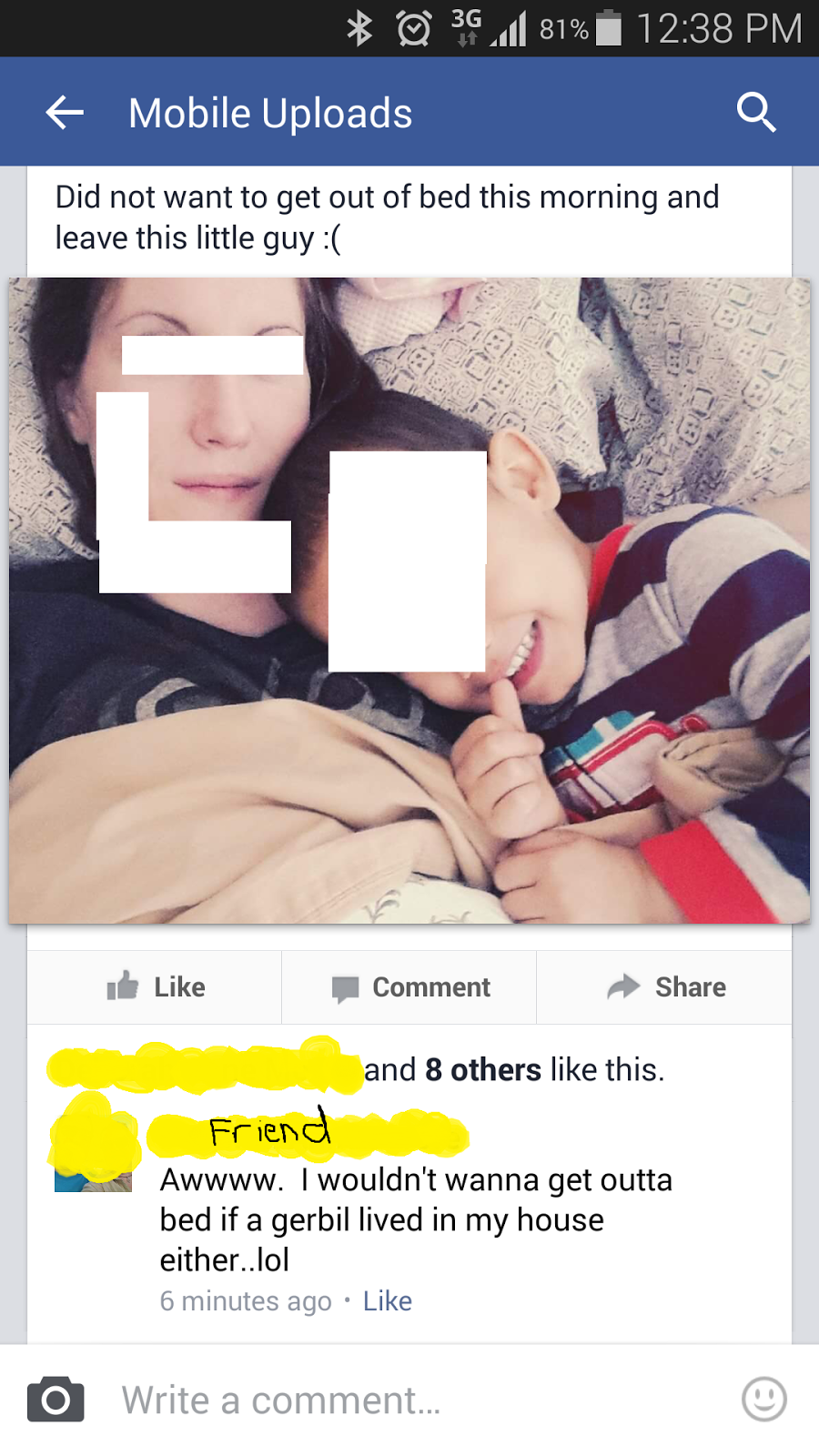 I honestly don’t even think it’s still here. I have literally set up a minefield of traps and they haven’t even been touched. I think in the chaos of my screaming it must have run out the door.

At least that’s the theory I’m going with and you had better not ruin it for me.

We spent the majority of the day at my good friend’s house. As a fellow dancer, I guess I’ll call her my Ballerina friend! My lovely friend even helped the kids bake gluten and dairy free cupcakes!

After that we came home and I cut The Boy Child’s hair. Before we started he said “give me a funny haircut!!” and so I aged him about 40 years by shaving off just the top and the bottom.

He wasn’t sure what to think about that (I’m holding up a mirror for him).

P.S. if you cut your son’s hair at home, I’ve found it so much easier to cut it while he is sitting in a dry bathtub. Just put them in the tub, sit on the edge, cut their hair, vacuum out the tub, and then wash them off!

Because I don’t want all this hair on my floor!
(And no, he is not bald in the back, it’s just the way the light reflected.)

He was happy when I “made it regular” again

So that pretty much sums up our day. I spent a couple hours cleaning (blah), a took a much needed hour to update the kids scrapbooks, and now everyone is in bed and I’m getting ready for a girls night. But before I get to that, let me get your opinion’s on something. The Detective Whose Name I Do Not Like emailed me and asked me to have lunch with him on Wednesday.

Now if you remember I broke up with him several months ago. Then he called me in December, but I told him I was seeing someone. Well he doesn’t know that I broke up with the Philosophy Guy, and yet… lunch invitation.

But at the same time, I’m not because I broke up with him for a reason. We weren’t friends before we dated and I’m not sure I want to be friends now. When I was with him I thought I was starting to fall in love with him, but when I broke things off I was surprised at how I really didn’t, or even want to, look back.

Yet it’s been a couple of days now since I got his email and I have not yet emailed him back to say “no.”

What am I doing?

I really have no idea.

I definitely don’t want to date him again and I never get together with someone after we have broken up.

Well, that’s all I’ve got. I hope you are all enjoying the weekend and I’ll leave you with a few of my recent articles that have a little more content than just the randomness of this post.

(Don’t forget that these can apply to either gender, they were just written for a woman’s site)

If Your Partner Does These Six Things, You’re Being Silently Abused

If Your Man Does These 5 Things, You’re Being Manipulated

I think many of you will be able to relate to this one:

I Disowned My Biological Family And Got A New One

For the parents out there:

Why I Want My Daughter To See Me Naked

5 Topics You Should Absolutely Avoid During Playgroup (this wins my fav article award! I laughed so hard writing this!)

Why I Refuse To Let My Daughter Do Homework

Yes, I Swear In Front Of My Kids, What’s The Big F*cking Deal?

Check this one out. Oddly enough, the “star” of this next article, my bunny Charlie (real name!) was a gift from an ex boyfriend and the reason that I ventured into the pet store my ex managed, thus meeting him. Charlie came before my ex and outlived my marriage. That’s crazy to me!

The Great Bunny Escape (Or How Not To Walk A Rabbit)

Have a WONDERFUL weekend!!

Tags: Ballerina, Conversations I Did Not Think I Would Be Having, Dating, Kids, Odd, Weekend
Newer Posts

Do You Want To Ask An Attorney A Question For Free?

He Needs To Move Out, Now!