A Week With My OTHER Weirdo

As most of you know from my Facebook post, The Boy Child had a surgical follow up appointment last week. It was a week sooner than it was supposed to be but I had noticed a couple of things that had alarmed me a little bit and I wanted the doctor to take a look at him. The doctor sent him for a couple of tests before he saw him and after going over the test results, the doctor informed me that unfortunately the surgery had not been a success. I was pretty bummed, but you know what?

I can’t do anything about this.

There is absolutely nothing that I can do except to wait for him to heal enough that we will be able to try again, and when that time comes, we will get through it.

But that’s not today. So for now I’m choosing to turn my attention elsewhere and so today we are not going to be talking about surgery. Nope, we are going to talk about the fact that my son is crazy.

Adorable, but a total nutcase.

I actually wrote the remainder of this post back in October (when I wrote about how strange his sister was), but I never got around to posting it, and I have to tell you, he gives his sister a run for her money in the weirdo department. At just 4 years old, when he isn’t busy washing his hands with a used urinal cake, he is doing other things that are just plain strange.

This is what it’s like living with him for a week:

“Let me show you the cut that I have on my finger.” 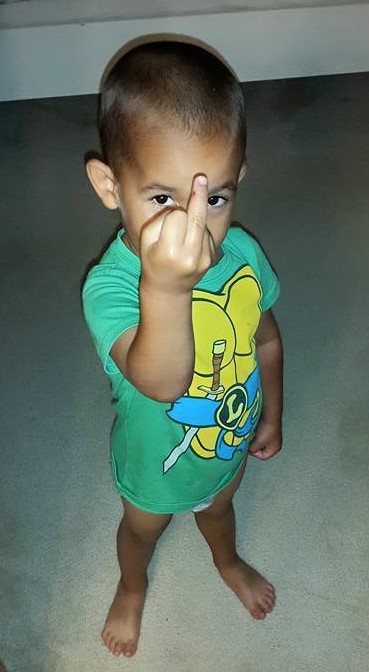 Tuesday:
One morning the outside of my townhouse was being painted. I only found that out when I got out of the shower, grabbed a towel, walked into my bedroom, and immediatly dropped to the floor behind my bed, because there was a man eye level with me on the outside of my 3rd floor bedroom window.

I was not expecting that. 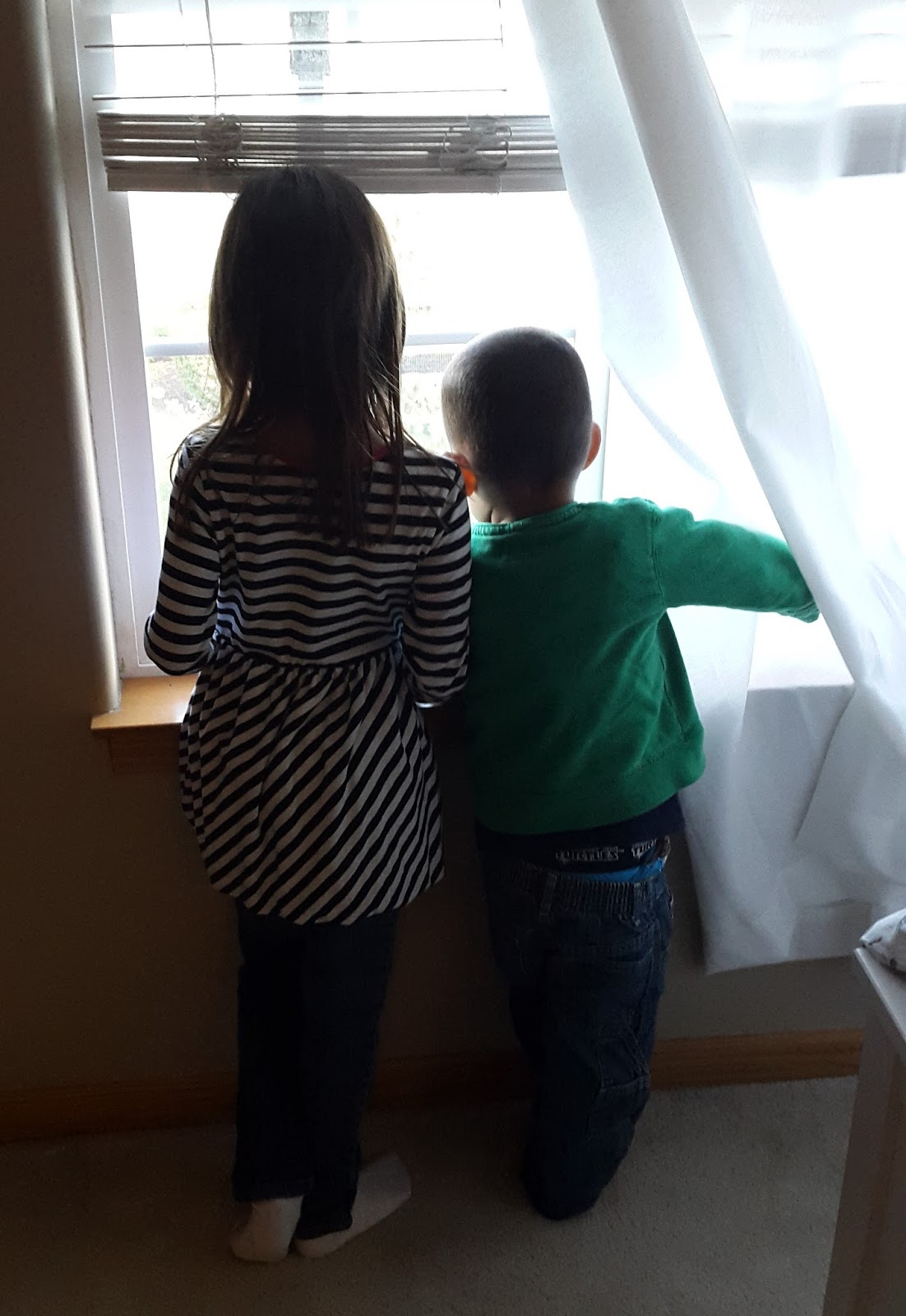 The Boy Child had opened the blinds to see the painter, who was on a ladder and caulking the window frame. I don’t know who was more surprised, the painter or me!

After I crawled back to the bathroom, resuscitated myself, and screamed at the top of my lungs for The Boy Child to close the blinds, The Boy Child (totally unfazed by the fact that his mother was basically convulsing on the bathroom floor) asked me what the painter was holding.

“Caulk. He’s caulking the window” I answered, all 4 times he asked me.

Apparently my answer (all 4 times) wasn’t clear enough because when we went to leave later that morning, The Boy Child opened the front door and excitedly told the painter “my mommy said you have cock.”

I arrived at daycare where the kids were playing on the playground. The Boy Child comes running over to me and exitedly exclaims “Mom!! I ate dirt!! I spit some out though, so are you proud of me?”

We are 40 minutes into our 60 minute drive to the brain doctor when from the backseat I hear (in a wobbly voice) “mommy, I’m going to throw up.”

One look in the rearview mirror alerts me to the fact that this is not a test and one look at the standstill traffic I’m in has me realize that we can’t get out of the car. I’m screaming at his sister to dump the contents of her bookbag on the floor and give the bag to him (that’s me, the ever prepared mom), and two seconds after gaining possetion of the bookbag, he throws up; DIRT.

He later gives me his explanation as to why he ate dirt, and you can watch that below. You will need to turn your volume up.

(If you are reading this via your email, you will have to click the blog post title link to view it on the actual blog. For some reason the videos do not appear within the email version).

Spoiler: It involves chocolate and worms.


While buckling The Boy Child into his car seat on our way to daycare, I noticed that he still had his pajama shirt on, which was now under his sweater. Being a responsible parent I made him take it off, but being naieve, I failed to check his pants.

I was greeted by this when I picked him up from daycare later that evening. 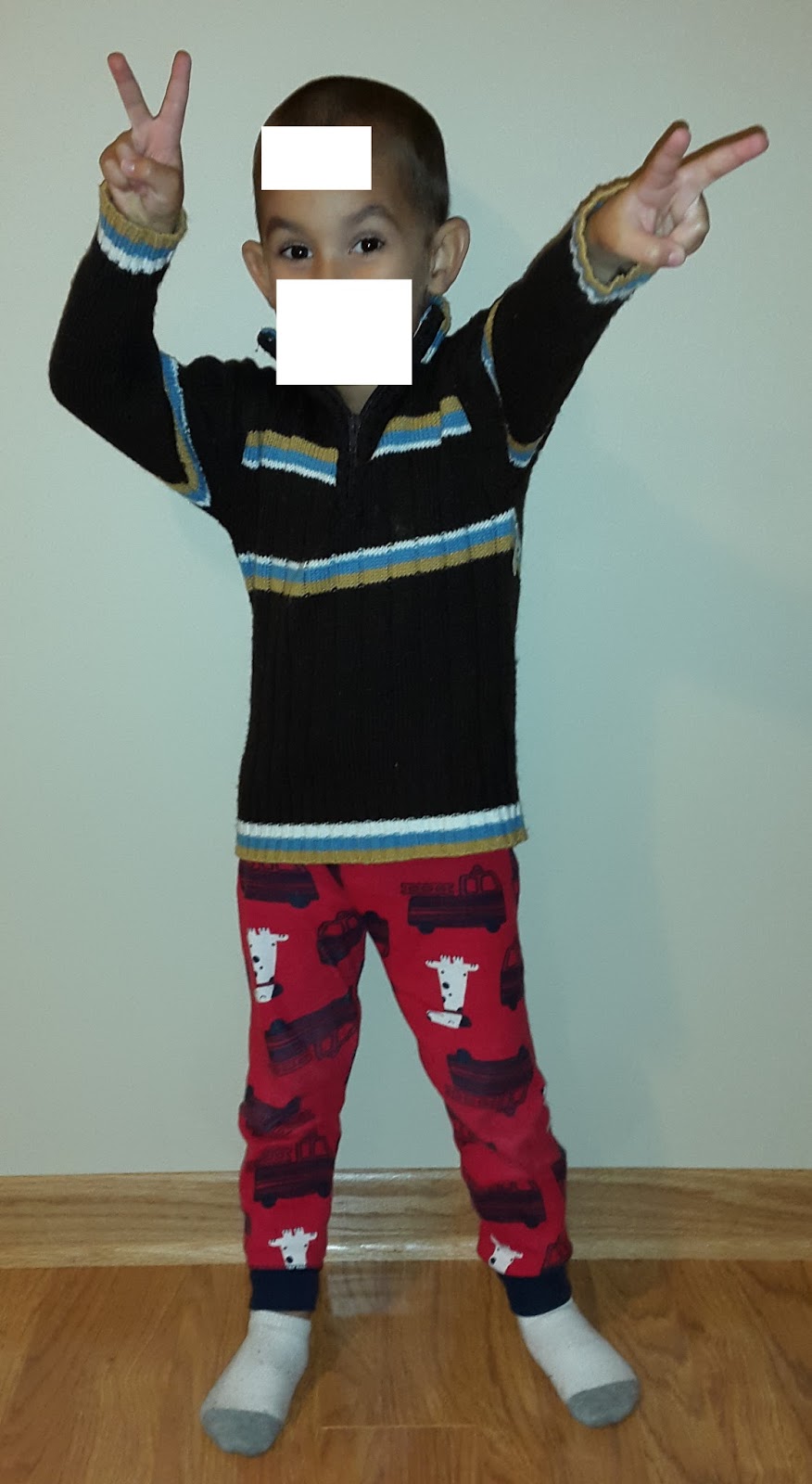 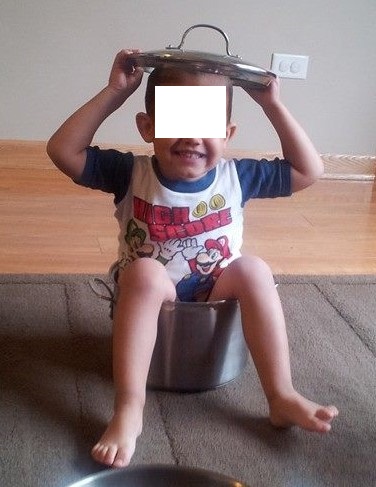 We were sitting at a stoplight when The Boy Child noticed that the man in the car next to us was smoking.

Boy Child: “MOMMY!!!! CLOSE THE WINDOWS!! THAT GUY IS SMOKING!! Smoking is bad for you, right? You can get very sick from doing that. What does it do to you?”

Me: “Well, smoking can give you cancer because cigarettes have chemicals in them.”

Me: “Smoking can make your insides turn black and then you die.” (Too harsh??)

Boy Child: (Looking horrified, he starts SCREAMING out the window to the man) “STOP SMOKING!! YOU’RE GOING TO GET BLACK INSIDES AND DIE!!!”

Me: “Stop! Stop doing that! You can’t scream at strangers!

Him: “Well maybe his mommy never told him that his insides were going to turn black and then he would die. Who wants to die? Then he won’t be able to go to work anymore!” 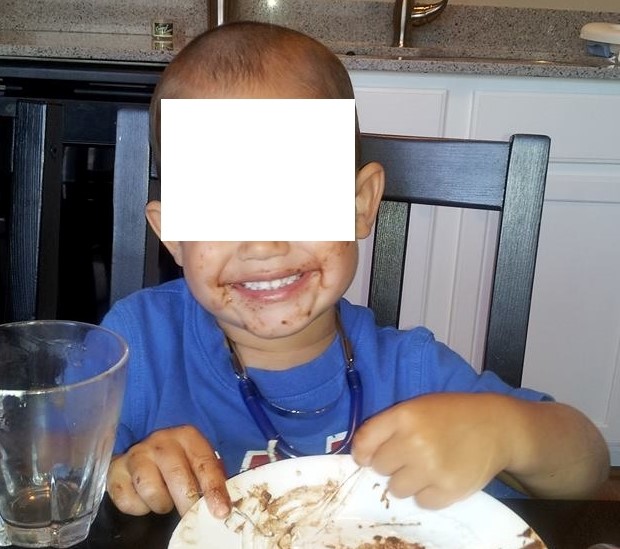 “Ok!” he said, excited at the game we seemed to be playing.

“What color is the sky?” I asked him (and upon hearing myself say it I instantly wondered why I had asked him such an easy question). “Blue!!!” he exclaimed, totally proud of himself for knowing the answer.

“When is your birthday?” I asked him, and he replied with another correct answer (which if I’m being totally  honest here, surprised me).

Looking down at his sock covered feet, he seemed frozen in place as if her were trying to switch on his x-ray vision. Eventually he pulled the sock off one foot and started counting his toes.

I was a little shocked. How, at 4 years old, does my kid not know how many toes he has?

“And what about your other foot?” I asked him.

Looking completely and utterly annoyed, he looked down at his still sock covered foot, rolled his eyes, and in a very exasperated tone answered “I’ll just count those ones tomorrow.” 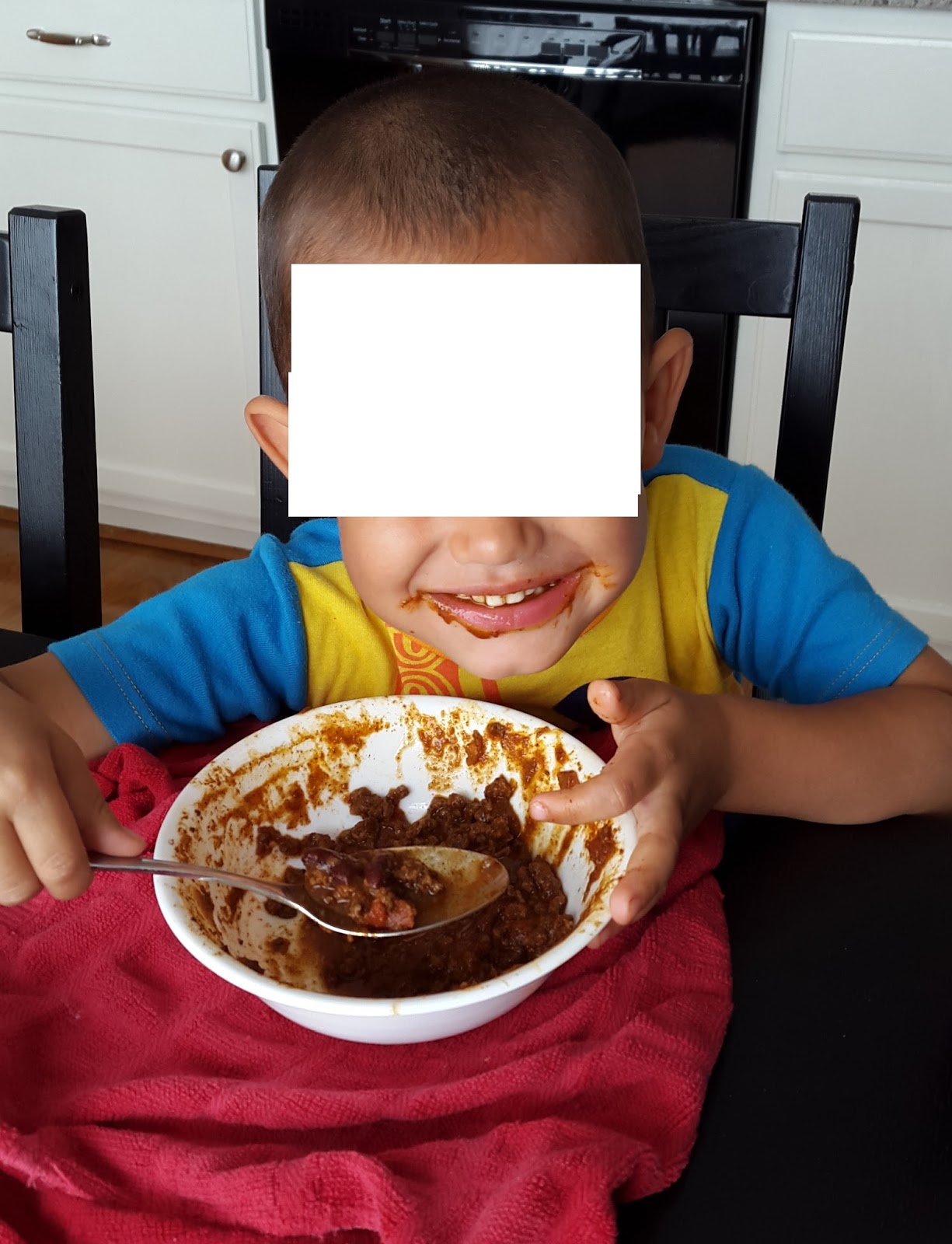 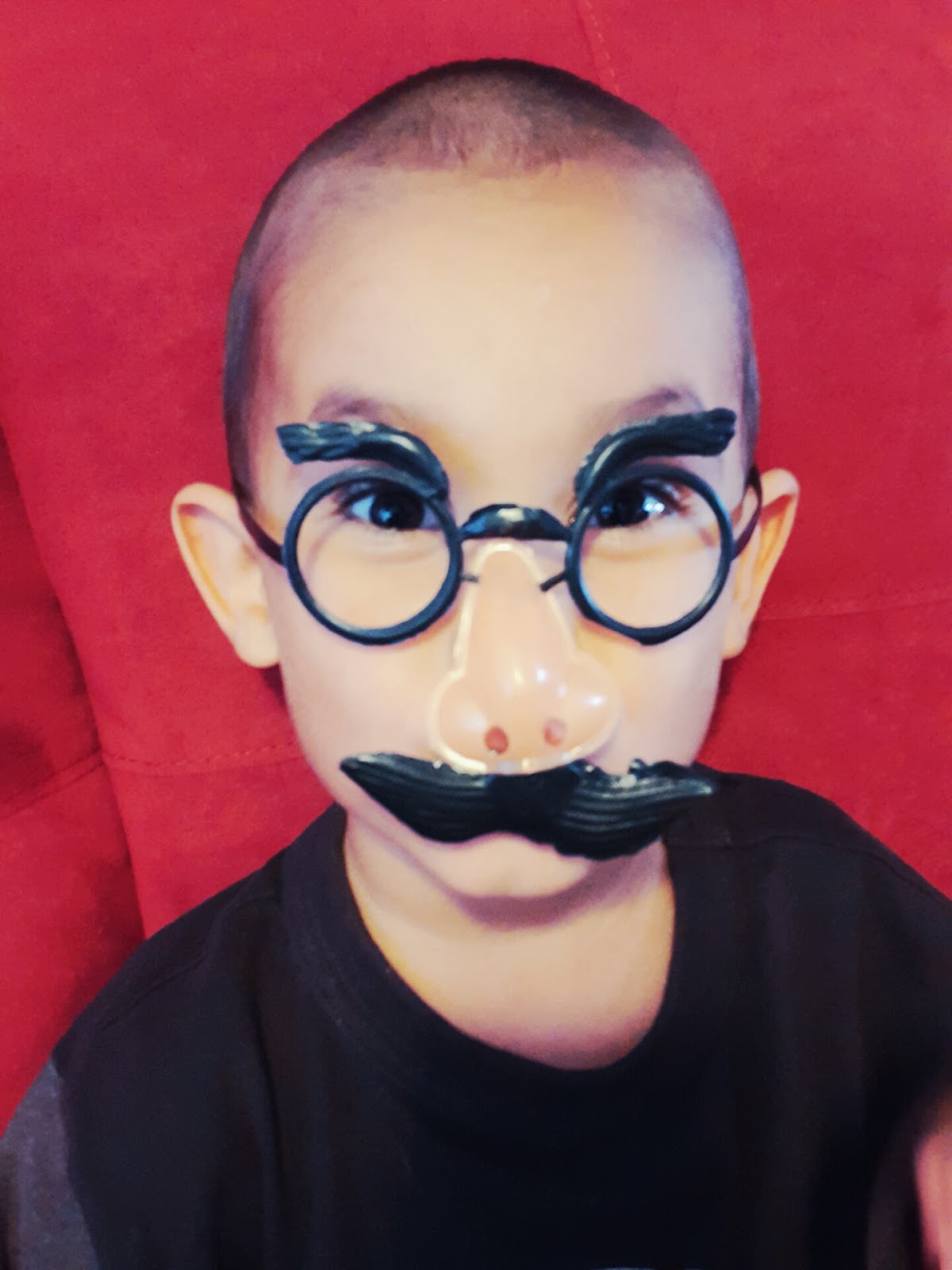 And P.S., before I go, I think the above photo is the first time that I’ve ever looked at him and thought “huh. I think he kind of looks like me.”

Maybe at some point I will actually look like I birthed one of my kids!

But the weirdness, that’s all him.

Because we all know that I’m normal….

Want To See How (Ab)Normal We Usually Are? Then Read These!

“And Then I Died”

“Life In My House Is Strange”

“These Are All Actual Conversations”

“Facebook Continues To Remind Me That My Kids Are Weird”

Tags: Conversations I Did Not Think I Would Be Having, Kids, Odd
Newer Posts

A Better Way To Spend Your Time

I’m Going To See My Family (Yep, You Read That Right)